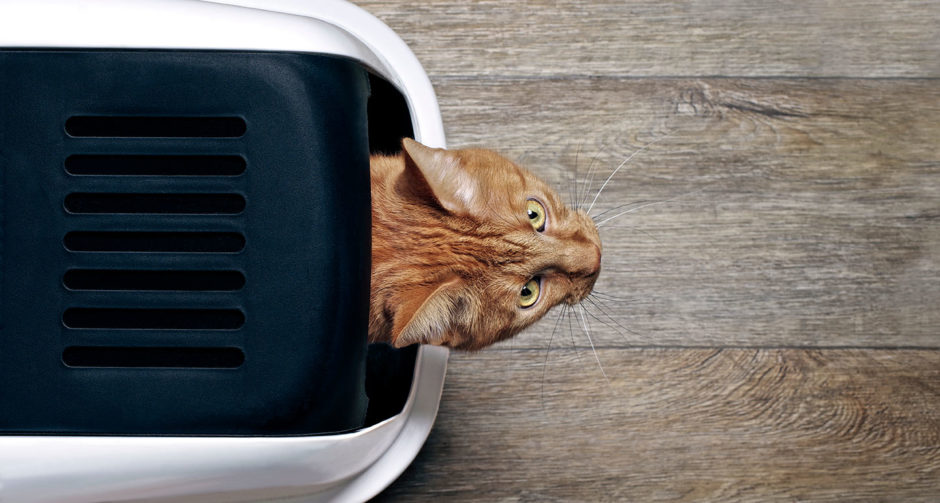 Tapeworms in cats are intestinal parasites that have the potential to make kitties sick. But what are the signs of tapeworms in cats? How would you know if your cat is suffering? Don’t bug out: We’re here to help!

To truly understand tapeworms in cats, pet parents first need to understand what tapeworms are and what tricks they have up their (metaphorical) sleeve when it comes to infesting your cat. Let’s get to it!

Tapeworms are long, white and flat segmented worms that can live in the small intestines of cats and dogs. They contain both male and female reproductive organs and use their hook-like mouth parts to anchor to the inside of the intestinal wall. There are three types of tapeworms that can infect felines:

All three typically use other animals, called an intermediate host, to enter the cat.

Taenia and Echinococcus tapeworms can infect wild rodents and rabbits, in addition to house pets. When cats eat these infected prey animals, the parasite then infects the cat. But the most common tapeworm found in pet cats is Dipylidium or the “flea tapeworm.” 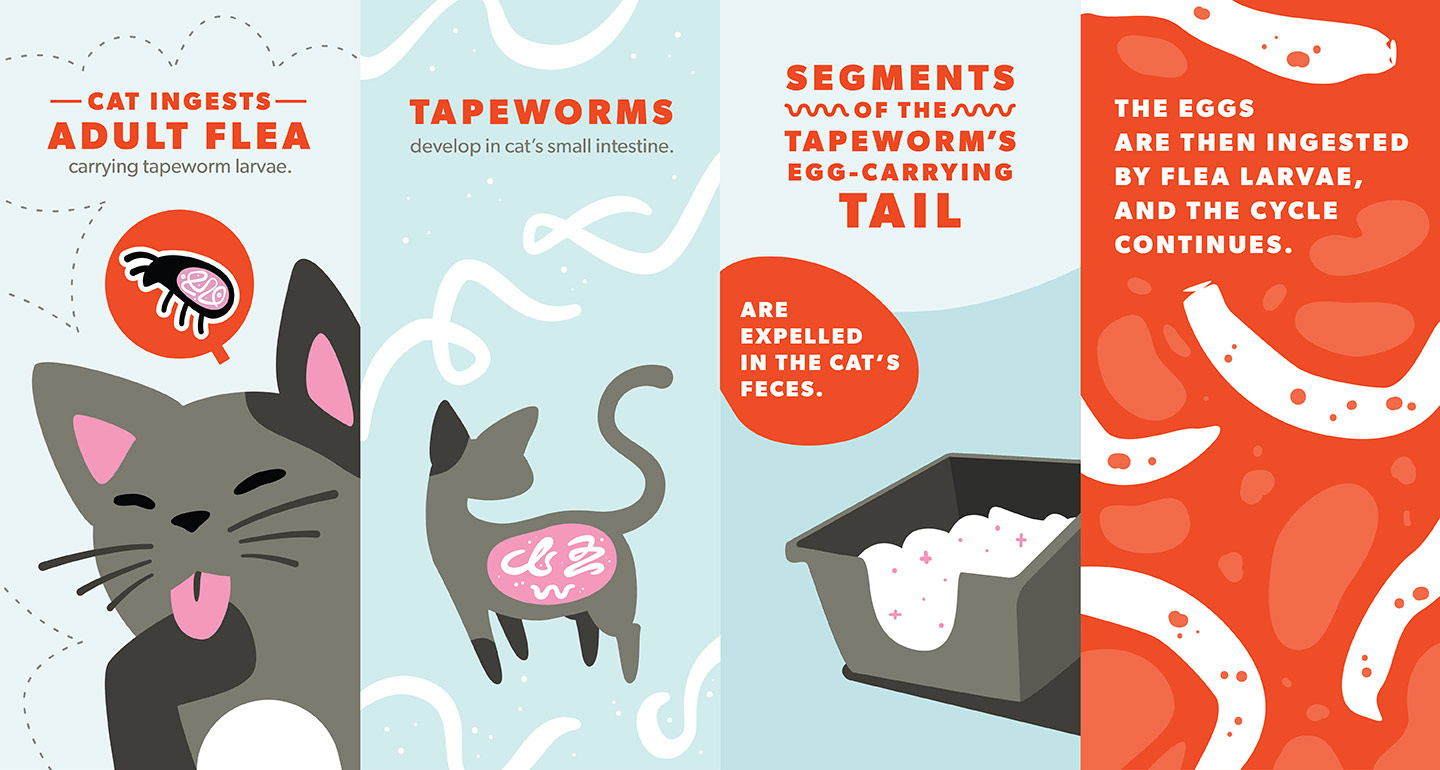 This intestinal parasite has earned its “flea tapeworm” moniker because it uses a flea as an intermediate host to get into your pet.

As seen in the illustration above, the cycle of infection starts when segmented tapeworm egg packets, called proglottids, are consumed by flea larvae (pre-adult fleas) either outside or by existing fleas in the home. These tiny flea larvae chew into the tapeworm egg case and consume the microscopic ova.

These eggs then hatch inside the flea larvae’s body and hide there through the larvae’s development into a blood-sucking adult flea. When the infected adult flea jumps onto your cat, it can then be consumed during your kitty’s grooming.

Once swallowed, the flea is digested, and the tapeworm larvae is released unharmed where it can then attach to the intestines. At this point, it takes about four weeks to grow into a reproducing adult tapeworm, which can measure anywhere from 6 to 23 inches and produce the segmented egg packets. These segments contain up to 20 microscopic eggs and exit the cat’s body through their feces. Once released into the environment, they become ingested by flea larvae, and the cycle starts all over again.

Most cats do not show signs of illness from tapeworm infections. Cats who have heavy flea infestations are more likely to end up with large amounts of tapeworms in their intestines, and there is potential for these patients to experience the following signs of tapeworms in cats:

You may also spot the tapeworm egg segments in your cat’s litterbox or near their anus. Pale yellow and mobile, the Dipylidium proglottids come out with the cat’s feces, but the segments can also migrate from your cat’s anus without the presence of stool. They are about a quarter of an inch long when fresh and stretched out, but begin to dry after leaving the body and become more difficult to see. When dry, they somewhat resemble sesame seeds. Fresh or dry segments can occasionally be seen stuck to the fur around the anus or moving on the surface of fresh feces.

Rarely, a condition called Haw’s syndrome may be associated with heavy tapeworm presence in cats and cause prolapse in the third eyelids (nictitating membranes). This syndrome can occur in severely dehydrated cats, but has also been associated with significant disease of the stomach and intestines due to parasites (such as tapeworms), inflammatory bowel disease, intestinal cancer and viral enteritis. However, the absence of Haw’s syndrome does not rule out intestinal parasite infection or other intestinal disease.

What makes it so difficult to diagnose tapeworms in cats is that kitties are very fastidious groomers. Cats can clean the evidence from their backsides and bury their stool in the litterbox before anyone gets a chance to see the evidence of infection. And fecal flotations performed by your veterinarian can also come up short when trying to detect tapeworm infection due to the intermittent shedding of the egg-containing segments.

If your veterinarian finds fleas or even just the feces of fleas (aka “flea dirt”) on your cat, they will likely recommend deworming for tapeworms due to the high risk of an existing infection.

How to Treat Tapeworms in Cats

The most effective medication for killing tapeworms in cats is praziquantel. It is the only drug that is effective against all species of tapeworm, and comes in tablet, injectable and topical forms.

While one dose is considered effective to kill adult tapeworms, it is recommended to administer a second dose about two weeks later to kill any remaining or newly introduced tapeworms. Effective flea control must also be used simultaneously to clear and prevent reinfection with Dipylidium worms.

How to Prevent Tapeworms in Cats

As the old saying goes, “An ounce of prevention is worth a pound cure.” That certainly holds true when it comes to tapeworm infections. Vigilant and effective flea control for your cat is the first step in preventing infection from the flea tapeworm, Dipylidium, and cats who go outside will often hunt and consume prey, which serve as intermediate hosts for the other species of tapeworms. These cats should see their vet every three months for intestinal parasite testing and deworming whether symptoms are present or not.

Common Questions About Tapeworms in Cats

Can people get tapeworms from cats?

A:Although it is uncommon, tapeworms can potentially affect people, too. The way tapeworm infections occur in humans, though, depends on the species.

The flea tapeworm Dipylidium must inhabit a flea to become infective. Therefore, if a human accidently ingests an infected flea, they could ingest a tapeworm. This means that people cannot get a Dipylidium tapeworm infection directly from eggs accidently consumed from their cat’s stool or from eggs on their fur.

Humans can also be infected with Taenia or Echinococcus tapeworm species if they consume an affected intermediate host, such as a rodent, rabbit or livestock that is contaminated with tapeworm larvae.

According to the U.S. Centers for Disease Control and Prevention, Echinococcus is the only tapeworm species that has immediately infective eggs that do not require an intermediate host to cause infections. This means that people can become infected with Echinococcus eggs if they are accidently consumed after passing out of the cat or dog’s intestinal tract. Due to this, Echinococcus and Dipylidium tapeworms can more easily affect small children because kids are often less concerned with hygiene than adults.

How serious are tapeworms in cats?

A: Tapeworms in cats should be taken seriously. Any parasite, whether internal (like intestinal tapeworms) or external (such as fleas, ticks, lice and mites), has the potential to negatively impact your cat’s health. Tapeworms can potentially lead to intestinal inflammation, which is bad for your cat’s immune system, and a poor immune system can lead to an array of other health problems.

How long does it take to kill tapeworms in cats?

A: Within hours of administering praziquantel, the medication starts breaking down the tapeworm’s protective outer “skin,” which allows the cat’s immune system and digestive enzymes to kill and dissolve the parasite.

What happens if tapeworms go untreated in cats?

A: If tapeworm infections go untreated, then there is the potential for cats to begin to exhibiting the typical tapeworm symptoms in cats: vomiting, diarrhea, weight loss or poor appetite. Kittens and much older cats are especially susceptible to the adverse effects of intestinal parasites.  Kittens may not thrive and, in extreme cases, can develop intestinal obstructions from adult tapeworms. Older cats are more likely to develop inflammation in their intestinal tracts that can lead to chronic vomiting and weight loss. And cats of any age might resort to licking their anal areas excessively, or scooting their anus on the ground due to discomfort or itching.

While tapeworms in cats should be taken seriously, they are relatively easy to treat and prevent.  Effective flea control and deworming, as recommended by your veterinarian, is key. Not all flea control products are created equal and there is no deworming product that kills every type of intestinal parasite. Your veterinarian can help you choose the best treatment and prevention plan for your kitty’s lifestyle.