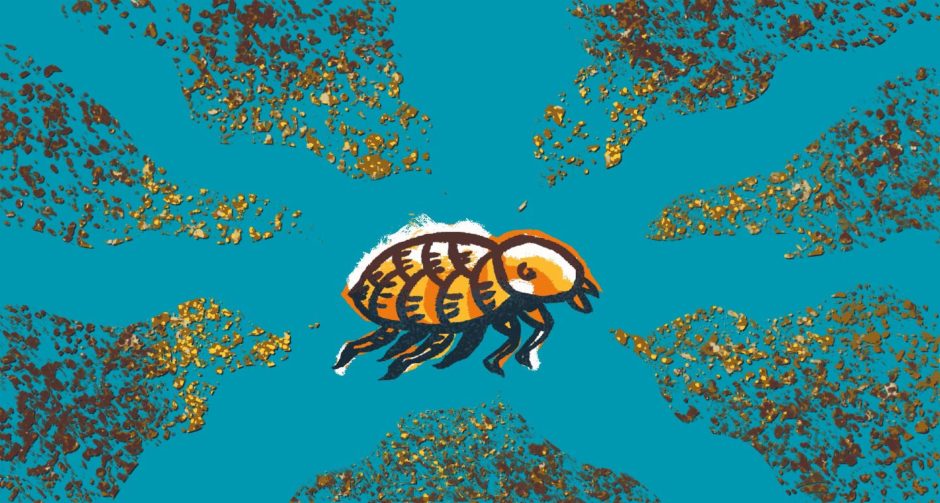 Flea dirt: If you’re a pet parent, you’ve probably heard of it. Maybe your veterinarian has even found it on your pet. But what is flea dirt, exactly? And more importantly, do you know how to get rid of it?

Although flea dirt is a problem that pet parents have to deal with more frequently than they might like, there’s good news: There are plenty of ways to get rid of it (and the fleas that cause it). The better news? It’s totally preventable.

So, What Is Flea Dirt Anyway?

Prepare yourself. Things are about to get gross.

Here’s the short answer: Flea dirt is a mix of blood meal and flea feces, says Dr. John Howe, DVM, president of the American Veterinary Medical Association. Essentially, it’s the waste fleas leave behind after they consume your pet’s blood. (Hey, we warned you.)

Now that you know what flea dirt is, take heart. There is one good thing about this icky stuff: It’s easy to find. Actual fleas can be difficult to spot, because they are so tiny and move quickly. Flea dirt, on the other hand, stays in one place, making it an obvious warning sign. Finding flea dirt on cats or dogs may actually help you realize there’s a flea problem before it gets out of hand.

Tick poop—yep, we’re going there—is another story. It’s less likely to be found before the ticks themselves, says Dr. Mitzi Clark, a board-certified veterinary dermatologist and assistant clinical professor at Cornell University’s College of Veterinary Medicine in Ithaca, New York. “Tick excrement is not something that I routinely identify or expect owners to identify on their pets,” she says. “Certainly, ticks that stay attached to the animals can and will defecate, but it’s not a common finding on the skin like flea droppings or flea ‘dirt’ would be.”

Flea dirt is dark, even appearing black in some cases, and looks like small flecks or clumps, Dr. Howe says. Although it can be found on any part of your pet, it’s most often seen around their rears and bellies. Keep in mind that it may be harder to spot fleas and flea dirt on cats than on dogs because felines are such fastidious groomers, he adds.

Basically, what flea dirt looks like is, well, regular dirt, and it’s easy to mistake one for the other. But there’s a simple solution for telling them apart. “Since fleas ingest a blood meal from the pet, this blood is passed in their droppings,” Dr. Clark says. “One way we distinguish flea dirt from regular dirt is to wet it and wipe it on a white surface to see if it looks red, like blood.” (If that task sounds too gross to handle, no judgment here—go ahead and delegate that task to your veterinarian.)

While tick poop isn’t seen as commonly as flea feces, you may find it in the area around a tick bite, Dr. Howe says. “It is important to check your pet for ticks and to remove any ticks as quickly as possible,” he says. “You should also talk to your veterinarian about treatment.”

Does Flea Dirt Mean an Infestation?

Many pet parents wonder whether it’s possible for a pet to have flea dirt but not fleas. Sorry, but no. When you find flea dirt on cats or dogs, you can’t assume your pet was merely a pest pit stop.

“A flea that is dropping waste on the animal has had enough time to feed on that animal,” Dr. Clark says.

That means they’ve probably also had time to breed. Female fleas can lay eggs within two days after they’ve fed, says Dr. Jennifer Coates, DVM, of Fort Collins, Colorado. She adds that flea eggs are near-impossible to spot. So even if you don’t see any live fleas, flea dirt means they’re probably hiding out somewhere on your pet.

How to Get Rid of Flea Dirt

Flea dirt and tick poop won’t magically disappear on their own, nor will the fleas and ticks that cause it. So it’s important to take action if you find fleas, ticks or their feces on your pet.

Step one for how to get rid of flea dirt? Eliminate the fleas. “If a pet is covered in flea dirt, I think the most important step is eliminating the fleas with the use of good flea preventatives and environmental treatment, if necessary,” Dr. Clark says. “It’s also important to remember to treat any [other] animals in the house that can also harbor fleas.”

Giving your pet a bath with a shampoo designed to fight fleas and ticks might seem like the obvious first step. But talk to your veterinarian before running that bath. If you’re using a topical flea/tick treatment or prevention product, bathing may interfere and reduce the effectiveness of those products, Dr. Howe says.

It’s not only animals who require attention. You’ll also need to thoroughly clean your pet’s bedding, as well as their environment—aka the flooring, furniture, and other things they come into contact with—where fleas and ticks can lurk between hosts. Doing this, along with working with your vet to make sure your pet is on a flea/tick preventive product, is the best way to keep fleas and ticks (and their dirt) off your pet.

Is Flea Dirt Harmful to Humans?

When most pet parents find flea dirt on dogs and cats, their biggest concern is for their pet. But remember: The presence of fleas and ticks is problematic for humans, too.

“We know that certain diseases can be transmitted from fleas and ticks to humans,” Dr. Clark says. “Usually, in order for a human to be harmed, the parasite (flea or tick) has to actually bite the human or the human has to ingest the flea.” There’s a theoretical risk to humans who come in contact with the feces of these parasites, she says, but it’s low.

“The real risk is that if the droppings are there, the parasite is there and humans can get sick if bitten by fleas and ticks,” Dr. Clark says. “A good practice is to wash hands after handling any pet—especially before eating—and to keep any wounds you have covered and away from contact with animals.”

Look, we know this stuff is gross. But if you’ve found tick poop and flea dirt on your cat or dog, it’s time to take action. Dr. Clark says she often recommends flea and tick preventive products from the isoxazoline class (Bravecto, NexGard, Simparica, Credelio, and Revolution Plus) to her clients. But every pet is different, and there’s no one best product for all pets, she adds. “As always, your pet’s veterinarian should help you decide what is the best anti-parasite medication for your individual pet.”