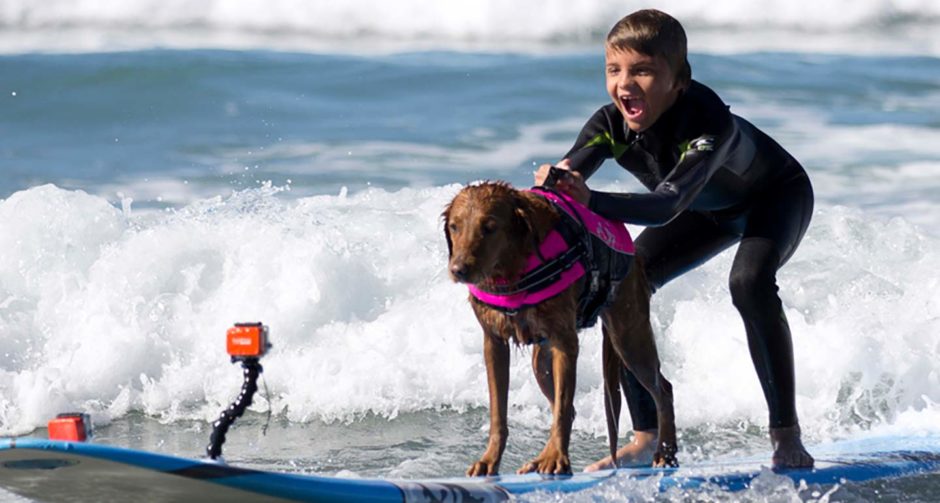 When service dog trainer Judy Fridono met surf dog Ricochet for the first time in 2008, she thought synchronicity had brought her the perfect puppy.

“I whelped a litter of puppies for a woman from Oregon who donates puppies as service dogs,” says Fridono, who at the time was hoping to adopt another service dog recruit. “I knew I wanted a girl and I knew I wanted one with white fur on her chest. I told the woman after eight [of the puppies were born], if the ninth one is a female with white fur, that’s the one [for me].”

The ninth puppy was indeed a female with white fur. “I thought it was a destined journey,” Fridono says.

But she couldn’t have known the joy this dog, whom she named Ricochet because she had so much energy she was “bouncing off the walls,” would share with people in need across the country.

Regarded as “the world’s most famous surf therapy dog,” Ricochet, who lives in San Diego, California, with Fridono, makes a difference in the lives of people in need every day—and inspires countless others in the process.

Fridono began service dog training Ricochet at 16 weeks old, and at first she did very well.

“That lasted about a year and then she completely shut down,” Fridono says. “I even thought about rehoming her.”

Fridono then remembered an incident in which Ricochet hopped on a boogie board in a kiddie pool when she was about 8 weeks old. Fridono switched gears and instead, got Ricochet involved in surfing. Soon, Ricochet became involved in competitions. When she was 15 months old, she appeared at an event to help raise funds for Patrick, a 14-year-old boy who is a quadriplegic and needed a service dog.

“Ricochet jumped off her board and got right on with Patrick,” Fridono says. “I had been struggling trying to train her as a service dog for a year, and she kept getting on board with Patrick.”

Fridono watched as Ricochet seemed to intuitively know how to bond with Patrick. That’s when she realized she did have the makings of a service dog on her hands—Ricochet just had to find her own purpose.

“I was so happy she told me who she is,” Fridono says.

“She balances and helps the kids balance so they don’t fall off,” Fridono says. “I don’t know how she is able to make these immediate and deep connections to people.”

West Butner, now 13, met Ricochet when he was 5 and first went surfing with her when he was 6. West has moderate to severe autism and, before meeting Ricochet, was completely non-verbal.

“When he first met Ricochet, he had a really good time and for the first time, it really gave him something to talk about,” says Lauren Chavez, West’s mother, who lives in Irvine, California, with her fiancé, West and his 16-year-old sister, Reese Chavez.

“West didn’t like the water when he first surfed, but the very first time he went out [with Ricochet], he just stood up and was smiling,” Chavez says. “I can only describe the connection Ricochet has with kids and others as some sort of spiritual connection. Ricochet makes eye contact and the connection is made and it gives kids a sense of calm.”

West’s connection with Ricochet was so deep that he began serving as a junior water handler, helping other children who were connecting with Ricochet for the first time. West made many friends, says Chavez, including veterans with PTSD when he participated in a joint program that pairs the two groups together.

“West still has issues, but working with Ricochet really brought him out of his shell,” she says. 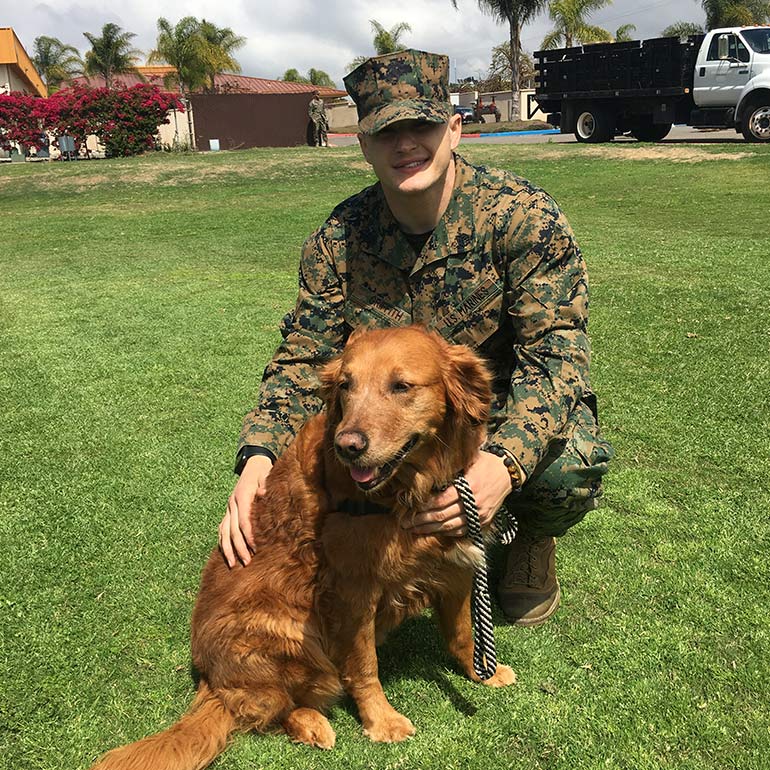 In addition to kids with special needs, Fridono knew Ricochet could help veterans, too. At first, Ricochet surfed with them; now, Ricochet and Fridono also work with veterans at the local naval hospital, the Naval Medical Center San Diego, in other therapy settings.

Staff Sergeant Persons B. Griffith IV (Ret), 31, of Arlington, Texas, first began working with Ricochet in 2016 when he was in a therapy program at the naval hospital in San Diego. Griffith, who had served two tours in Afghanistan, had received many therapies for his diagnosed PTSD. But it wasn’t until he met Ricochet, he says, that he had a real breakthrough.

Ricochet intuitively knows when someone is suffering from anxiety or has encountered a trigger and “plants,” (will not move) if she reads this in a patient. Fridono then reads Ricochet’s response and tries to talk to the patient about what they’re feeling.

“I had been working with Ricochet for weeks and was so used to putting on my game face, saying everything was fine,” says Griffith, who goes by the name Griff. “Ricochet kept planting and at first, I thought, ‘There’s something wrong with this dog.”

After about five weeks, Griffith says he was having a particularly hard time and Ricochet planted and wouldn’t move.

“That’s when Judy asked if I was sure everything was OK,” says Griffith. “At that moment, I realized the dog was picking up on my anxiety and that’s when I started to learn to recognize it in myself. That’s when the healing process really started with me and I began to make progress in my other therapy by leaps and bounds.”

Griffith also eventually surfed with Ricochet, helping him overcome an anxiety he felt associated with the ocean.

Griffith still works with Ricochet four or five times a year and has continued in his other therapies.

“Ricochet was the value-added piece I needed,” Griffith says. “I see how far I’ve come and I am healing slowly.”

Fridono says she doesn’t know how many people Ricochet has helped in her 11 years as a therapy dog; she guesses the number is in the hundreds. However, she says, Ricochet’s name has taken on new meaning: she’s “ricocheted” all over the world, making an impact.

“I’m so glad she found and chose her purpose in life,” Fridono says. “I think all dogs have the ability to do that—we just don’t know how to interpret what they’re trying to tell us.”