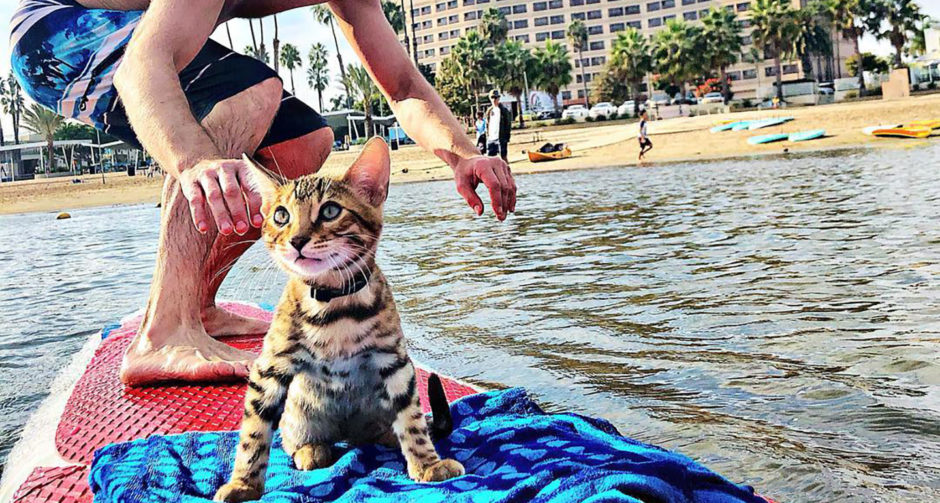 Maverick is Bengal cat who, when he was only 6 months old, learned to surf with his dad, Nick Heaney, a former professional wakeboarder. Since setting his toes on the nose, this surfing cat has become an Instagram sensation and SoCal favorite.

As Heaney’s girlfriend, Kayla Tabish, tells it, they weren’t looking for a cat when Maverick came into their lives last fall. That all changed when Tabish’s brother asked her to watch the litter his Bengal had delivered.

One kitten in particular had a sore leg, so Tabish kept him close, taking him everywhere she went for about three days. Tabish, who was already mom to a 14-year-old tabby named Titten, got so attached to the little guy that her brother gave her the kitten as a gift.

Since Heaney was a pro wakeboarder for Red Bull, being in water is his life. It was only natural for him to want to share his love of the water with Maverick, especially considering Bengals are known for their affinity for water.

Maverick first stepped onto the water atop a longboard affixed with Neoprene on top so he could dig his claws in.

“He was scared at first, so we just put him on the board [on] dry [land] for the first few sessions, and then after time, he would love to be on the board in the pool,” says Tabish, a filmmaker from Los Angeles, California. “He would roll in the sun and be in heaven.”

Maverick’s parents started with safe zones on the board so that he would get used to it. Eventually, he just wanted to go into the water on his own.

The couple took him out to the pool every day. After about 15 pool trips, they started taking Maverick out to area lakes and nearby inland waters three times a week.

“It definitely took some time,” Tabish says of her outgoing cat who appears to be following in his pop’s footsteps. “We knew repetition was important.”

Pretty soon, Maverick was able to ride a kayak and a paddle board.

Then, in January 2019, equipped with a puppy life jacket (Tabish says they can’t find one made for cats), the adventurous kitten joined Heaney on a surfboard in Malibu. Not only did he “surf,” Tabish says, “[he] wanted to jump in and swim!”

From there, Maverick consistently took to the waves with Heaney.

Since Maverick joined the family in September 2018, his personal and newfound professional life has been riding high. He has more than 42,000 Instagram followers to date, along with a Facebook page and a YouTube channel.

Tabish says that a lot of people tell her they wish their cat could be more adventurous like Maverick. She believes that through training, repetition and consistency, they can. Even their older cat walks on a leash now, she says.

“It’s a lot of stimuli; you want to desensitize them to the crowds,” she explains. “It’s a hump you have to get over.”

“And Maverick [has] been a gem,” she adds. “He’s really brightened our lives up.”