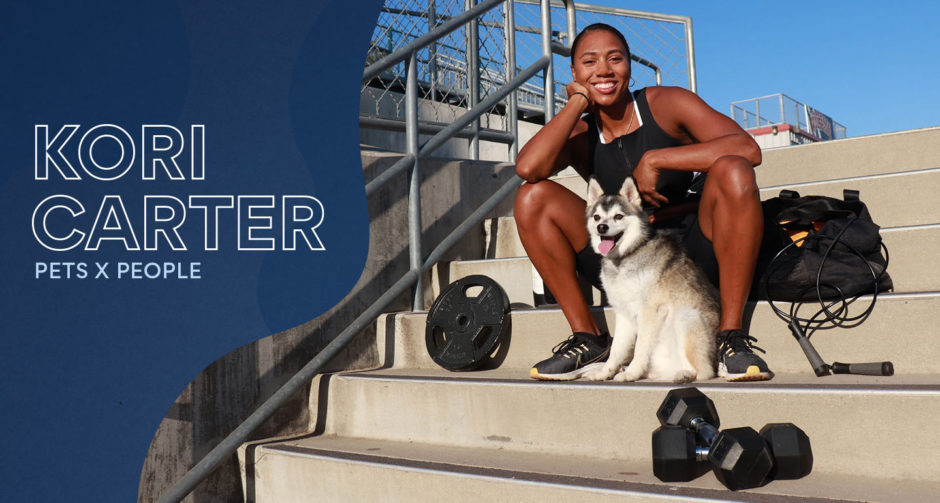 Kori Carter wasn’t expected to make headlines at the 2017 IAAF World Championships in London. Instead, all eyes were on American Olympic gold medalist Dalilah Muhammad who, three weeks prior, had run a personal best. Surely, the experts predicted, Muhammad would repeat as champion in the women’s 400-meter hurdles.

But Carter was about to prove them all wrong. From lane nine, she sprinted out of the blocks and held her position up front, unable to see how far back her competitors were—or whether they were gaining on her. As the runners made up the stagger heading into the homestretch, Muhammad and Carter found themselves 1-2, respectively, until the last hurdle. That’s where Carter unleashed one final surge, moving ahead of Muhammad and past the finish line. In 53.07 seconds, the fastest time ever out of lane nine, Carter seized the world championship in a dramatic upset.

No one saw Carter coming—no one, she says, except her loved ones who’ve supported her life and training for years. That includes Kovu, her Alaskan Klee Kai, who’s been by Carter’s side throughout the ups and downs of her professional career. Caring for Kovu adds much-needed balance to her busy life of training and competition, Carter says, reminding her that she’s not just an accomplished athlete—she’s also a responsible and loving dog mom. 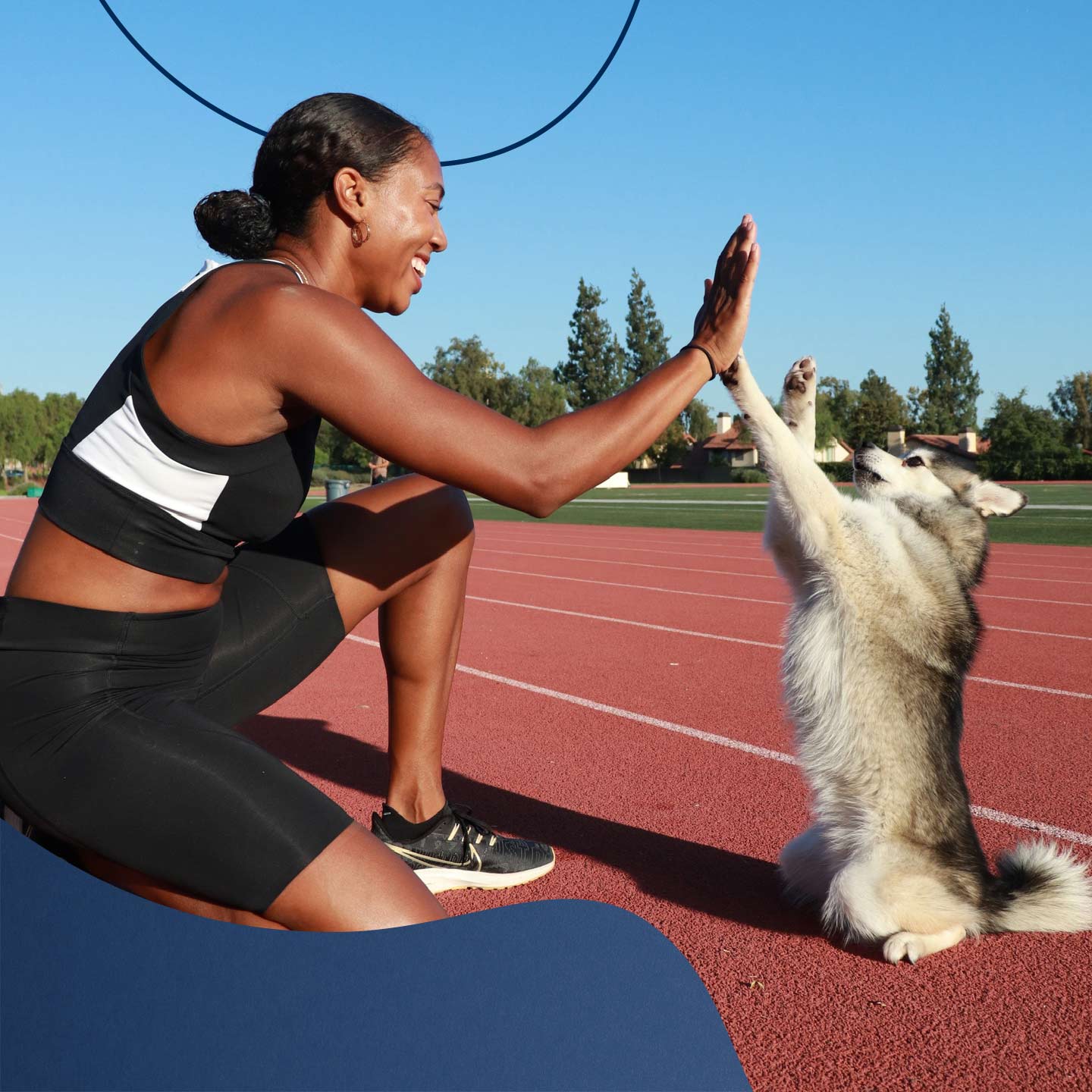 Originally from Claremont, California, Carter grew up participating in a variety of sports, from softball to soccer and basketball. Her speed set her apart from competitors on the field, and she relied on her athleticism to excel, no matter what sport she played. But when she decided to go out for the track team in middle school, she was hooked. Track was the first sport that inspired Carter to put in the extra effort to improve, and she embraced that individual focus.

“I liked the fact that my success was in my hands,” Carter says. She watched race videos, honed her skills at practice and read articles to learn about the different events. At first, Carter wanted to be a star heptathlete, aka a competitor who competes in seven different track and field events as part of a heptathlon, like three-time Olympic gold medalist Jackie Joyner-Kersee. In the process of trying multiple events, she found her specialty in the hurdles.

A five-time California state champion at Claremont High School, Carter earned her first international medal as a junior at the 2009 World Youth Championships, where she finished second in the 100-meter hurdles. Her accolades in high school earned her a spot on the track team at Stanford University, where she set the collegiate record in the 400-meter hurdles en route to the NCAA championship in 2013. As a professional in 2014, Carter won the USATF Outdoor Championships and has since become a force on the global stage.

Track may have been Carter’s first love, but affection for pets was a close second. “I’ve always loved dogs, but I never really had a dog growing up,” Carter says. That changed when Carter went pro. After winning the 2013 NCAA championship, she decided to forego her senior season at Stanford and sign a sponsorship contract with Nike that summer. Toward the end of the 2014 track season, she brought home Kovu as a puppy.

“Once I became an adult, I got my baby,” Carter says. 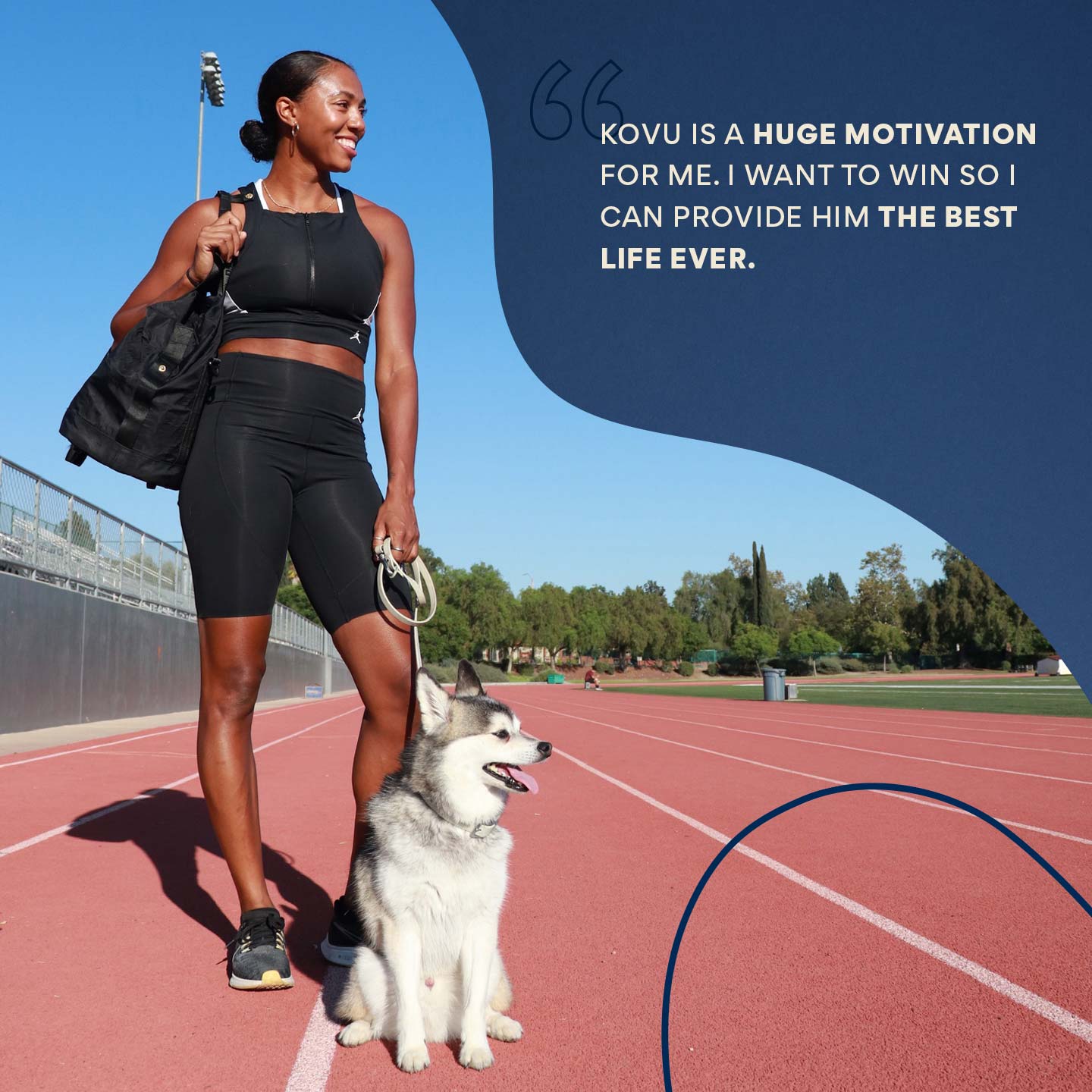 While Carter learned to support herself as a young pro training in Los Angeles, Kovu helped her understand the importance of caring for another. It wasn’t always easy.

“He is a very vocal dog, especially when he was a puppy,” Carter says. “He will let you know, hey, I'm hungry. I want to go out. I want to go for a walk. I was kind of on his time. I had to be on it with him and whatever he wanted to do.” (Happily, she adds, Kovu has since “mellowed out.”

Over time, Carter learned to listen and consider his needs.

“He's always been part of my adult routine. I think you learn to be more responsible because you have another creature depending on you to survive,” she says.

With Kovu keeping her grounded, Carter continued hitting professional milestones. In 2015, she qualified to represent Team USA for the first time at the IAAF World Championships in Beijing. In her first global championship, Carter made it to the semifinal. In 2016, she narrowly missed qualifying for the U.S. Olympic team when she finished fourth at the USATF Outdoor Championships.

After the 2016 season, Carter reunited with her college coach Edrick Floréal. At the time, Floréal was the head coach at the University of Kentucky, so Carter and Kovu packed their bags and moved to Lexington.

When she arrived, Carter didn’t have a place to live yet so she and Kovu stayed with Floréal and his family for the first few weeks until she found her own apartment. Floréal isn’t a big fan of dogs, Carter says, but he allowed her to bring Kovu anyway, which helped make the transition much easier.

“It was the best thing, but I knew he hated it,” Carter says with a laugh. 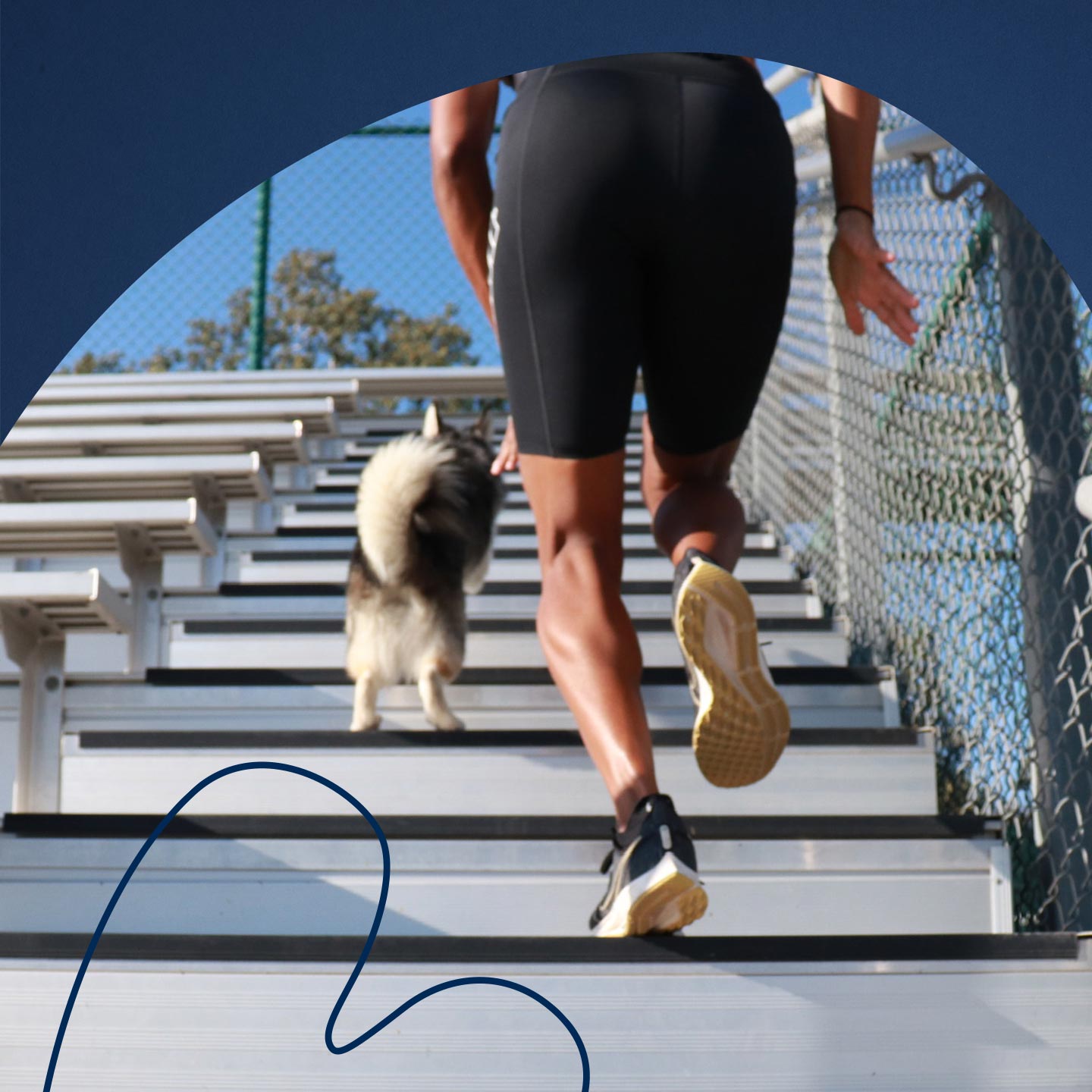 “His [Floréal’s] wife would come in and say, ‘You'd be passed out, face down on the bed, and the dogs would just be playing, running on top of you. You were so knocked out from the workout that you would not even notice,’” Carter recalls. “And I was like, yeah, that sounds right.”

Carter’s perseverance paid off. In her first season as a professional training under Floréal, Carter set personal bests of 23.07 seconds in the indoor 200 meters, 8.11 in the 60-meter hurdles, and 52.95 in the 400-meter hurdles. For the first time since 2015, she made Team USA when she finished third at the 2017 USATF Outdoor Championships.

The momentum continued on August 10, 2017, when Carter ran that breakthrough race to win gold at the world championships.

Sadly, Kovu wasn’t in London to celebrate her mom’s victory. But Carter was filled with gratitude for her pup, as well as her family and friends who watched over him so she could compete to her fullest.

“I'm really grateful for the community that I have and the support system I have, that they will take care of the most precious thing in my life,” Carter says. “I feel like I have to go out and perform because they sacrificed so much for me. For them to take care of me like that, it has to be worth it. That's a really big motivating factor for me. If my support system is going to go out of their way to help me, I can't go out there and lose.

“Kovu is also a huge motivation for me. Kibble is not free, and I want to win so I can provide him the best life ever,” she says. 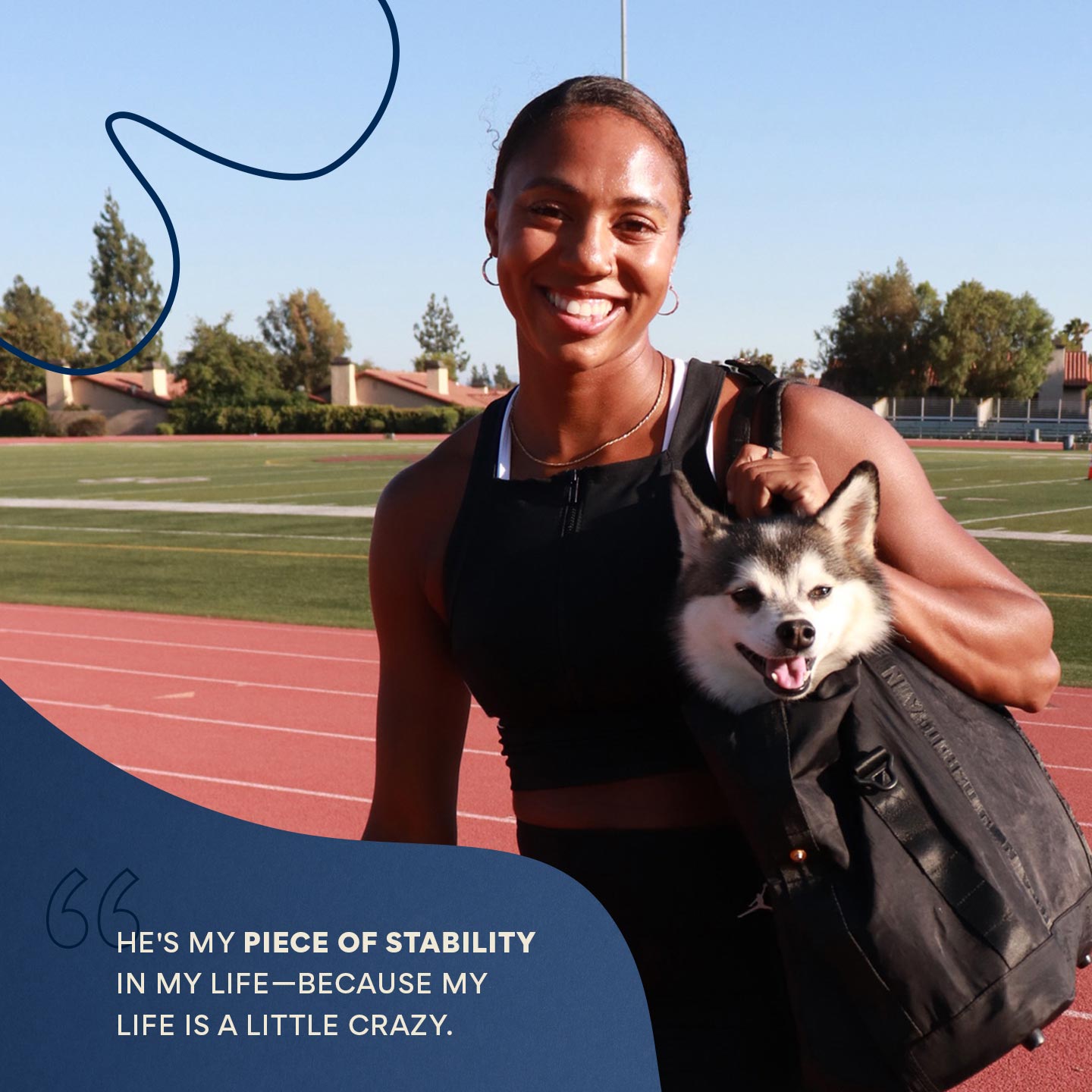 In June 2018, Floréal accepted the head coach position at the University of Texas in Austin. Once again, Carter and Kovu followed him, relocating to the Lone Star State.

Despite the frequent moves and travel demands required of her career, Carter says Kovu helps her cope with the changes. He’s her “road dog” after all.

“Kovu has been my constant through that,” Carter says. “He's always at my side. He's my piece of stability in my life because my life is a little crazy.”

During the COVID-19 outbreak, Kovu’s role became even more important. When the 2020 Tokyo Games were postponed to 2021 and most major sports competitions were canceled amid concerns over the virus, Carter once again relied on her companion. He serves as a reminder that she is needed off the track.

“I still have some sort of purpose without being able to go to competitions,” she says. “Kovu is my little source of joy every day.”

In April, Carter utilized her time in quarantine by building a dog house as a hangout space for Kovu, complete with a succulent garden, bed, turf floor and wall planter. Growing up, Carter helped her dad with handiwork projects, but the dog house was her first attempt at carpentry. And she’s since expanded on the hobby by building a side table, shelf and slant board to stretch her calves. 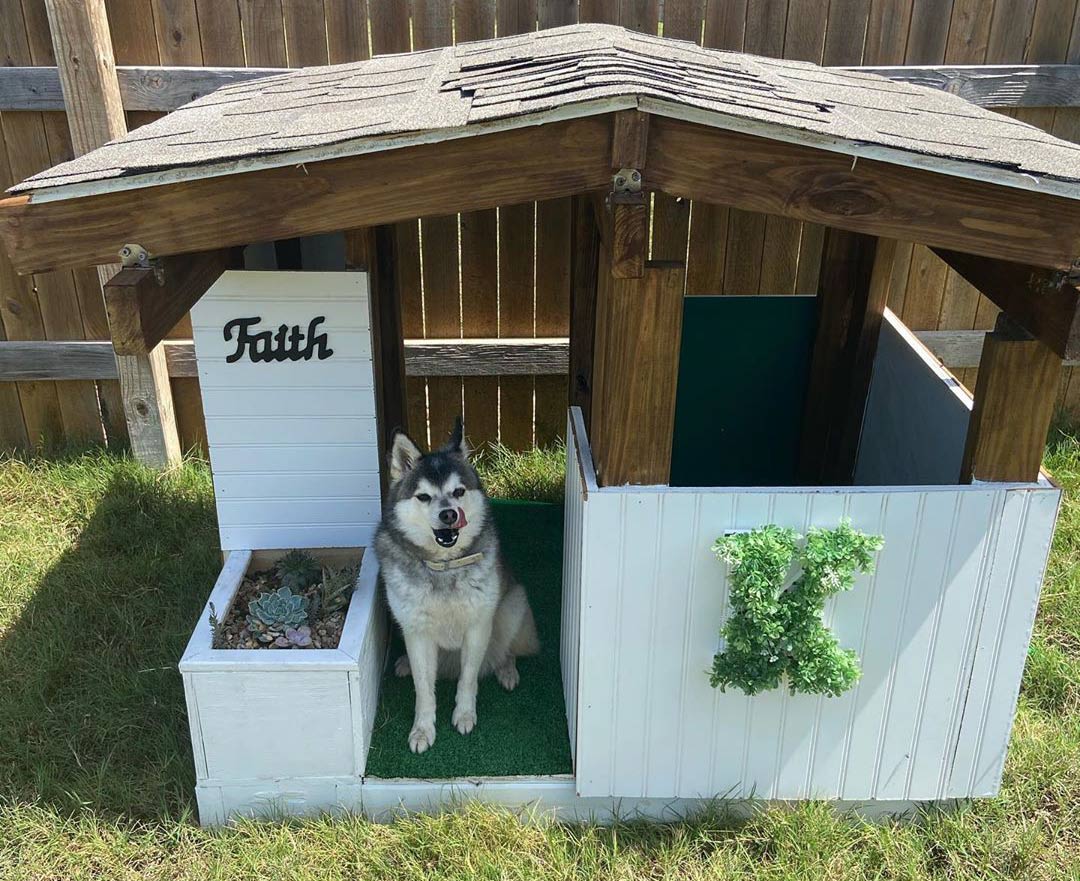 “As I need things, I'm trying to learn how to build them instead of buying them because I feel like I can make exactly what I want,” she says.

(Of course, if you’re not as confident in your carpentry skills, you can always buy a ready-to-assemble dog house.)

Lately, taking care of Kovu has also helped Carter structure her days. Under normal circumstances, she would have competed for a medal at the Tokyo Games, which were originally scheduled for July 24-August 9, 2020. Instead, in a COVID-adjusted season with few competition opportunities, Carter is focused on building fitness heading into 2021. Right now, her daily routine centers around workouts, recovery and taking care of Kovu.

“If anyone is appreciating COVID-19, it is my dog because I'm here all the time. Normally I would be gone for weeks at a time overseas for meets,” Carter says. The pandemic has impacted everyone in serious ways, she says, but at least there’s one upside: “Now, he gets to see me all the time and I think he's very happy about that.” 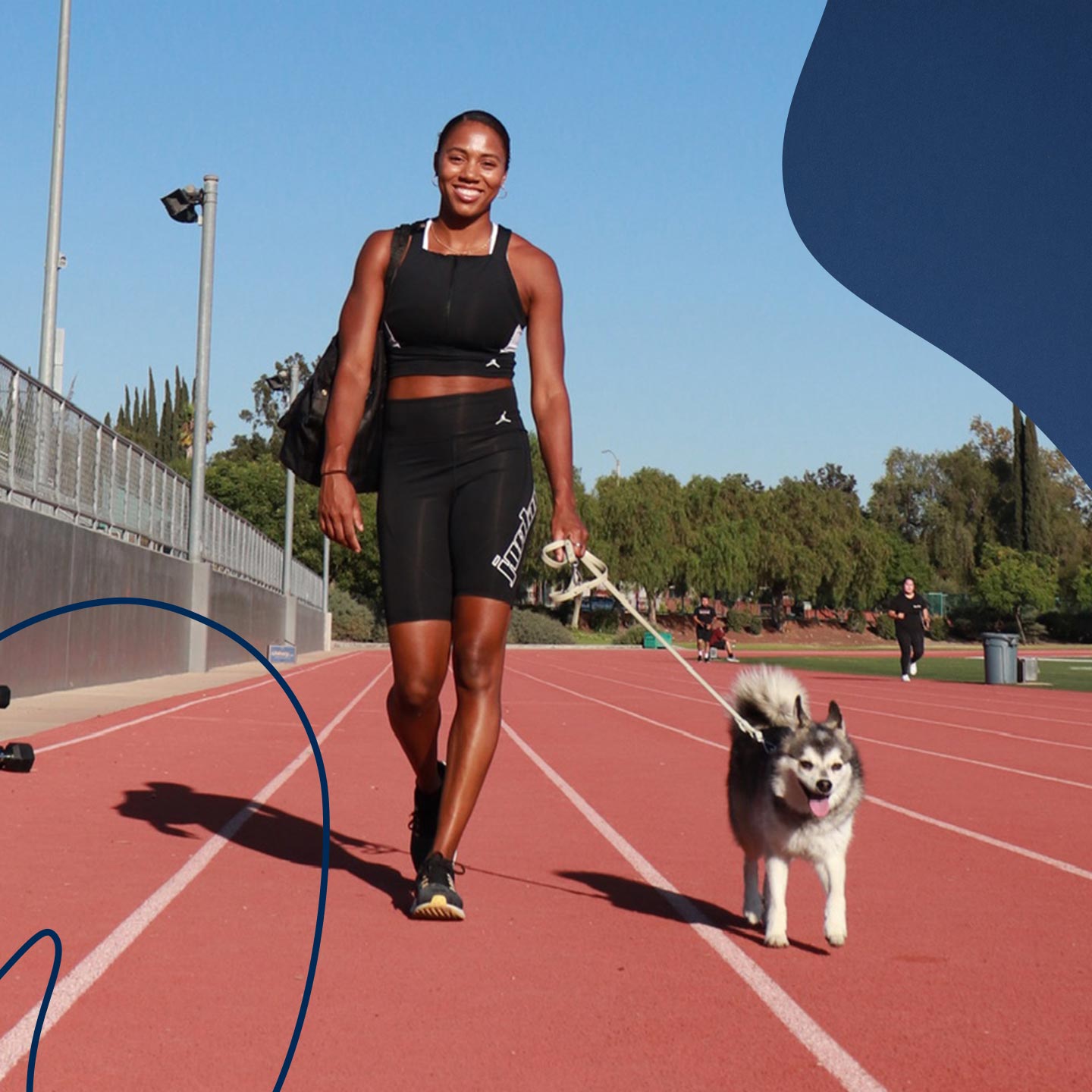 They even took a road trip together this summer to visit Carter’s family back in California. Once back home in Austin, Carter started the fall training cycle—with her trusty canine companion, of course! For the first two weeks, she did her workouts with Kovu at the high school near her house. While she sprinted on the track or did a circuit workout, Kovu would run beside her. If she ran up the stadium stairs, he’d sit at the top of the grandstand and watch her.

Kori Carter isn’t just a world-champion athlete—she’s a devoted dog mom with strong opinions when it comes to the gear she and Kovu use together. Here are a few of her tried-and-true necessities that keep both Kori and Kovu healthy and happy. 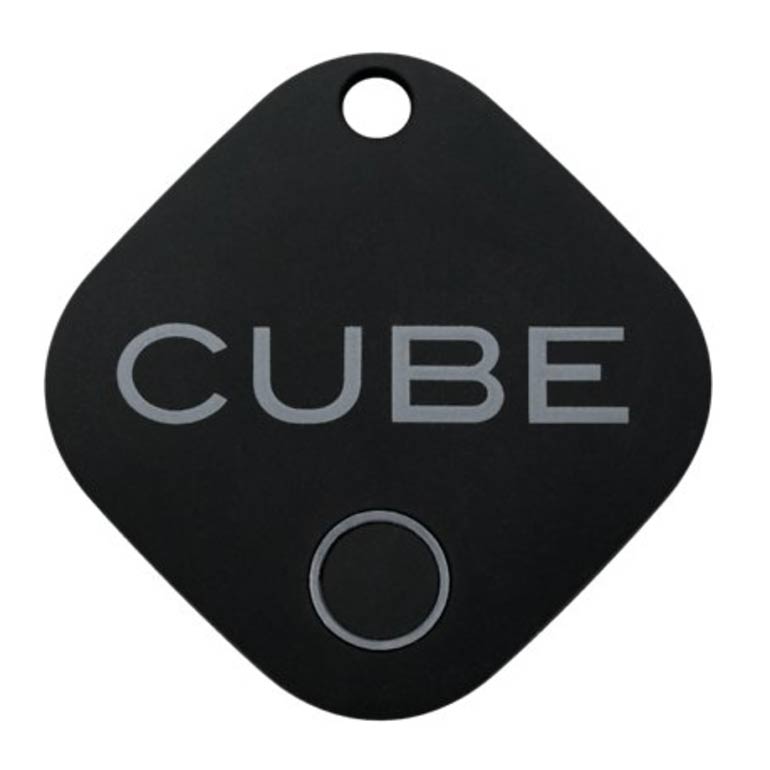 The collar attachment syncs up with the Cube Tracker app so pet parents can follow their furry friend’s whereabouts.

“Kovu is fast and smart—sometimes too smart for his own good. I feel comfortable knowing if he got out, I can find him again!” Carter says. 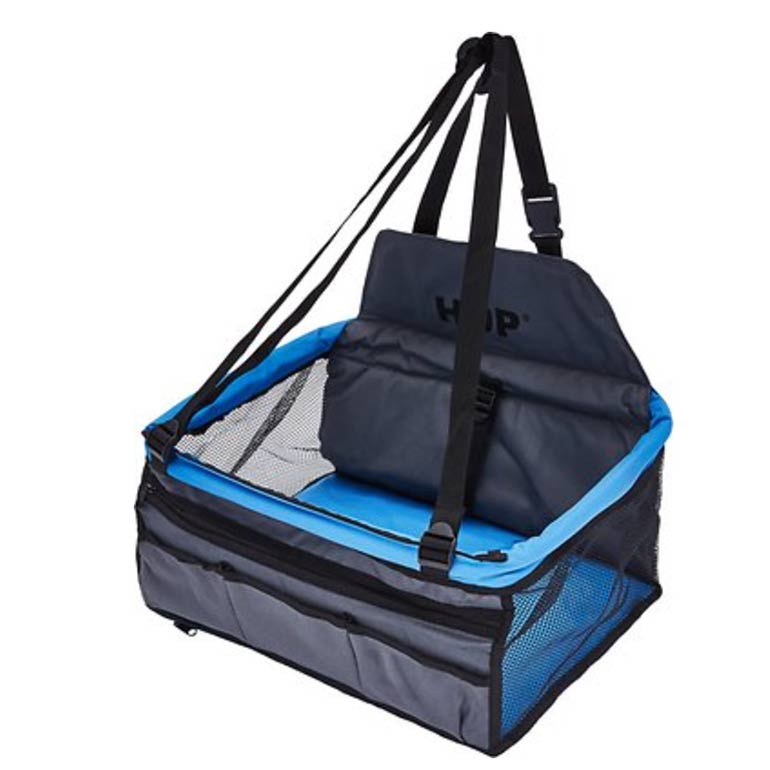 This car seat allows your dog to look out the window while staying safe and secure inside the vehicle.

“Kovu and I are always on the road,” Carter says. “Whether it’s short drives to grab a bite to eat or longer trips to compete, Kovu likes this car seat to stay safe and give him a boost to look out the window.” 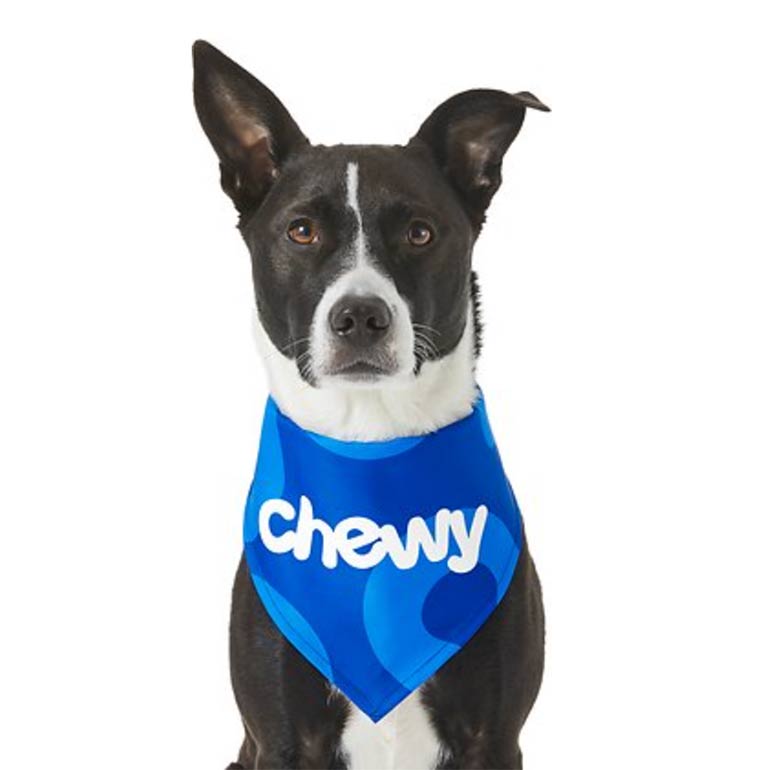 This comfy blue bandana will show the world your dog is team Chewy—just like Kovu! 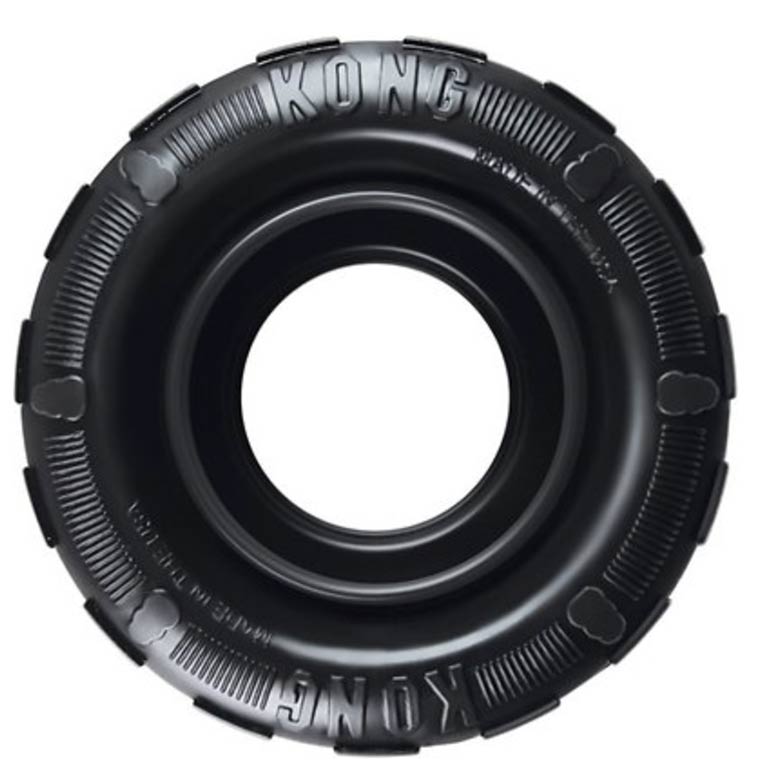 Shaped like a car tire, this chew toy is perfect for a bouncy game of fetch and can even be filled with treats.

“Kovu loves a good chew toy and I like to keep him entertained by putting little treats in there,” Carter says. “He loves it.” 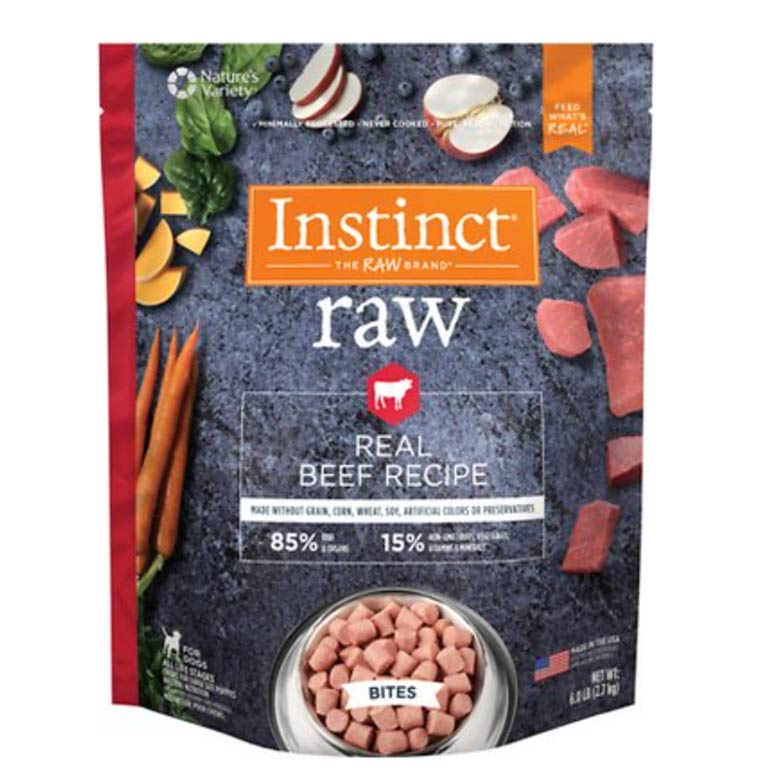 This protein-packed recipe is made with natural beef, non-GMO vegetables, fruits and wholesome ingredients to give your dog a healthy meal they’ll love.

“As an athlete, I like to eat fresh food, clean meals that include the nutritional value I need to perform,” Carter says. “Kovu loves fresh food like his mama! I try to limit my processed food and so does he.”

With less than a year until the Olympics, Carter is determined to make Team USA at the postponed Olympic Trials in 2021. She’s working toward her biggest goal yet: winning gold in Tokyo. As always, Kovu will be by her side, supporting her every step of the way no matter what the future holds.

“I wouldn't want to imagine life without him,” Carter says. “I feel like he balances me out because I can come home, chill with my dog after practice and just lay back and relax instead of ruminate on what I did wrong at practice or whatever. With him, I can be present.”