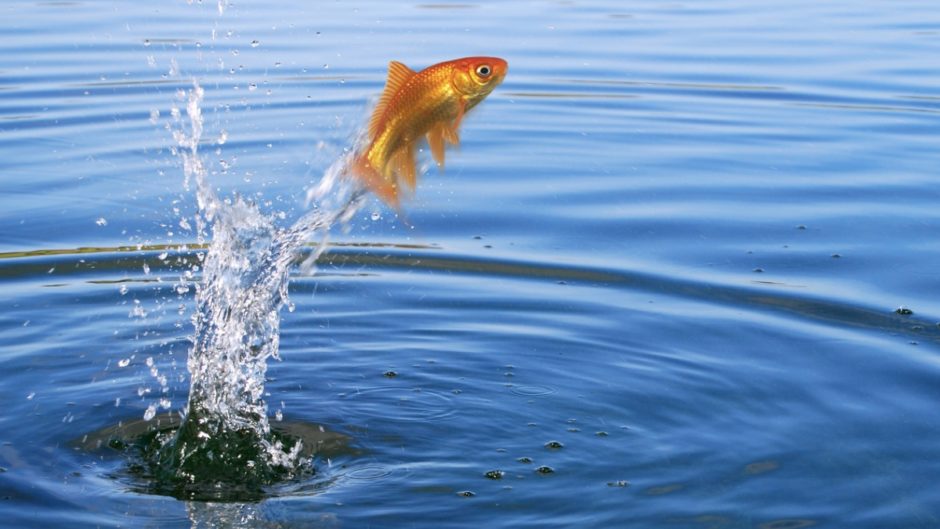 Fish are known mostly for swimming in water and not jumping out of the water. However, certain fishes tend to jump and some can jump fairly high. Some can even fly. Well not really, but the flying fish can actually soar for quite a distance.

Fish tend to jump for several reasons, the most common being because the fish is hunting or is being hunted. Jumping makes for a good defense mechanism as the fish being hunted can temporarily escape the fish that is doing the hunting. Game fish such as marlin and largemouth bass tend to jump out of the water to loosen the fishhook that may be stuck to their lip. These fish will jump clear out of the water and shake their head violently in an effort to remove the hook that is impeding their freedom.

Tropical fish jumping out of water can also be due to bad water quality in the fish aquarium. Improperly cycling your aquarium can cause fish to jump out as can high concentrations of ammonia or improper pH levels. Fish do breathe oxygen, and when water is dirty, there is less oxygen in the fish tank for the fish to breathe. Lack of fish tank accessories or hiding spots can contribute to fish jumping. Other fish that are known to jump out of their tanks include comet goldfish, killifish, (which tend to jump from water puddle to water puddle in the wild), and on the saltwater side, firefish are known jumpers. Koi, the most popular pond fish, have been known to jump out of the water.

If you keep fish that jump out of water, such as the hatchetfish or African butterflyfish, try and reduce this capability by adding floating plants and decorations that would inhibit their capability to gather speed to jump out. And keep your aquarium covered with a secure lid.