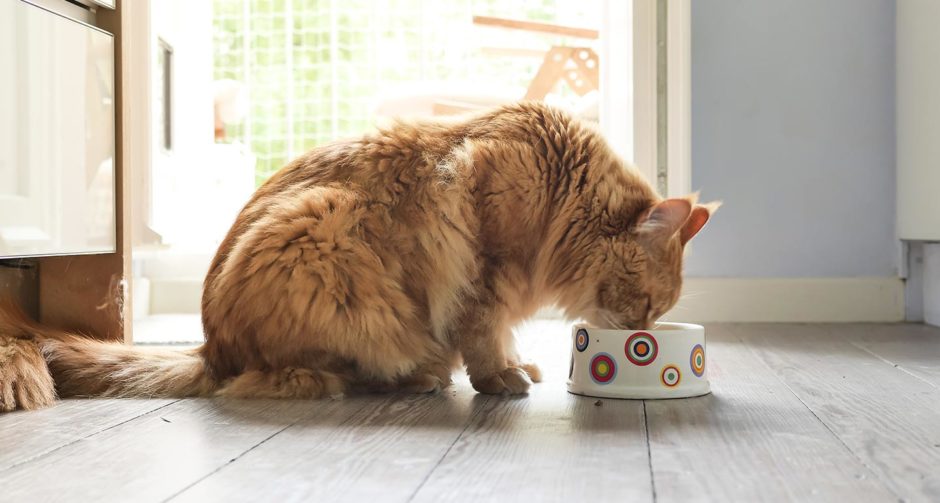 Lilly, a snow white 7-year-old domestic shorthair cat, appeared healthy and happy—but she was hungry all the time. She had even lost some weight, despite an extra scoop of kibble at dinnertime. So why was this cat always hungry? Concerned about her pet’s never-satiated appetite, pet parent Emma Rickets of Roseburg, Oregon, took little Lilly to the veterinarian for a checkup.

“I told him, ‘My cat is always hungry,’” Rickets says. “I described how crazy Lilly is, so full of energy, and so funny, howling and crying all night long looking to me to give her more food. But when my vet said she could have an overactive thyroid gland, I realized all that begging wasn’t because she was being cute or funny—it was because she really was hungry.”

Have you asked yourself, “Why is my cat hungry all the time?” Well, you’ve come to the right place. The answer could be based on a medical condition, like Lilly’s hyperthyroidism. It could be a behavioral issue. Or it could be that your cat is just looking for some attention.

Read on to find reasons why a cat seems hungry all the time, and what you and your veterinarian can do to help.

Diabetes is a disease that prevents cats from using dietary glucose for energy because of a lack of insulin, says Allison Mazepa, DVM, DACVIM, BluePearl Specialty and Emergency Pet Hospital in Eden Prairie, Minnesota.

“Cats with diabetes mellitus exhibit signs of increased hunger due to their inability to break down and use glucose for energy,” she says. “Insulin is the only hormone in the body that allows it to take glucose (i.e. sugar) from food and bring it into the cells where it can be broken down into usable energy. Cats that lack insulin will be unable to use this energy, and one of the classic signs of diabetes mellitus in cats is weight loss in the face of increased hunger and a good appetite.”

That means a diabetic cat would crave extra kibble to compensate for their lack of energy. In addition to cats appearing hungry all the time, Dr. Mazepa says, some other signs include increased thirst and increased urination.

“When an owner sees all three signs together in their cat, this should trigger a trip to the veterinarian, especially in a middle aged to older cat,” she says.

There, the pet care professionals will run a blood test and urinalysis, checking for increased blood and urine glucose.

“Treatment for a cat with diabetes will then involve a change to a high-protein diet and insulin injections twice a day at home under the skin,” Dr. Mazepa says.

Learn more about symptoms of diabetes in dogs and cats.

Hyperthyroidism is a disease that results in too much thyroid hormone circulating in a cat’s blood, says Maryanne Murphy, DVM, Ph.D., DACVN, clinical assistant professor of nutrition in the Department of Small Animal Clinical Sciences at the University of Tennessee College of Veterinary Medicine in Knoxville, Tennessee.

“Thyroid hormone is involved in regulating the basal metabolic rate in the body,” she explains. “When a cat has all this extra thyroid hormone moving around, it’s amplifying the metabolic rate. That means that all the energy the cat is taking in through its diet is being burned through very quickly. And so, it’s extremely common for the cat to become very hungry and even start to lose weight because it can’t keep up with those energy needs.”

In addition, a hyperthyroid cat could show increased thirst or urination, be vomiting or have diarrhea, have a dry haircoat and be hyperactive because of their high metabolism, Dr. Murphy says. To diagnose the disease, the veterinarian will do a blood test that looks at the cat’s thyroid hormones and perform a physical exam.

“A veterinarian may feel a thyroid slip or enlargement when she palpates the cat’s neck, and she may also hear a heart murmur or arrhythmia due to cardiac changes,” she says.

Dr. Mazepa adds that Hill's Prescription Diet y/d Thyroid Care cat food can help, too. “This diet is iodine-restricted and results in a reduction in thyroid hormone in cats that eat this diet exclusively after several months,” she says.

Learn more about hyperthyroidism in cats.

Intestinal problems can be associated with a decreased appetite or increased appetite, says Dr. Murphy, but when a cat is hungry all the time, it may have to do with irritated bowels from an inflammatory disease or intestinal cancer like lymphoma.

“It depends on the primary cause of the intestinal disease, but if we’re dealing with an increased appetite, it could be because of the level of inflammation is affecting the cat’s ability to digest and absorb nutrients, and it may need to take in a higher level of food to compensate for that,” she says.

Dr. Mazepa agrees. “Disease that affects the small intestine results in an inability to absorb nutrients,” she says. “Because of this, the cat will lose nutrients from food in the stool, which results in an increased appetite and weight loss.”

Diagnosis involves a thorough medical exam and blood test to check for low B12 concentration, along with an ultrasound or other imaging to look for evidence of intestinal thickening or enlarged lymph nodes, Murphy says.

“There’s a wide range of treatments depending on the cause of the disease,” she says. “We talk about diet changes. Sometimes you have to do immunosuppressive medications like steroids or other things. Sometimes we have to do chronic antibiotics and sometimes we do probiotics.”

If the veterinarian finds that it is lymphoma, more aggressive treatments may be in order, Dr. Mazepa says.

“To make a definitive diagnosis of primary GI disease, intestinal biopsies are needed,” she says. “This may be performed using a flexible endoscope or via a more traditional open surgical approach. Treatment for GI lymphoma is treated with steroids, plus or minus oral or injectable chemotherapy medications.”

Along with the gastrointestinal tract, the pancreas secretes digestive enzymes to help digest food after a meal, Dr. Mazepa says. If a cat has a disease called exocrine pancreatic insufficiency (EPI), the pancreas is unable to secrete those enzymes.

“This results in maldigestion of food and signs of increased hunger due to maldigestion,” she says. “Other signs of EPI include vomiting, severe diarrhea often with greasy stools, an unkempt haircoat and weight loss.”

If your cat is showing these signs, you should visit the veterinarian for an exam to determine why they’re so hungry, Dr. Mazepa says.

“To specifically test for EPI, a blood test called a TLI (trypsin-like immunoreactivity) is needed,” she says. “If the TLI is low, then the diagnosis of EPI is made. Treatment involves supplementing the cat’s food with powdered digestive enzyme with each meal for life.”

The natural changes that happen with aging can make a cat hungry all the time, too, Dr. Murphy says. As animals get older, their ability to digest fat and protein decreases while their energy requirements increase, she says, adding that in cats, the shift happens at around age 13.

“Fat provides twice as many calories in every gram as protein or carbohydrates,” Dr. Murphy says. “If you lose your ability to digest that fat, it results in a calorie deficit. The cat has to start eating more to get the calorie load in.”

Before a veterinarian would label an increased appetite as just part of the aging process, however, they’ll investigate one of the other potential causes, Dr. Murphy says.

“We would want to first rule out diseases like hyperthyroidism, diabetes, intestinal diseases and lymphoma before saying it’s just aging,” she says.

“It’s probably not super common, but when it happens, the parasitic load is either competing with the energy that the cat is taking in the diet or is inhibiting the cat’s ability to digest and absorb those nutrients,” she says. “A combination of those things will cause a cat to eat more food to try to maintain weight.”

Dr. Mazepa agrees. “Intestinal parasites cause increased hunger because the parasites themselves are eating nutrients ingested by the host,” she says. “This results in less food for the animal and thus increased hunger. You might also see diarrhea or vomiting, a poor haircoat or passage of worms in the stool.”

To diagnose intestinal parasites, a veterinarian will test the cat’s stool to look for microscopic evidence of parasites, like eggs and larvae, Dr. Murphy says.

“Treatment is usually an oral deworming medication that’s specific to the parasite, as well as cleaning the environment to prevent reinfection after treatment,” Dr. Mazepa says. “Screening is very important in all cats with increased hunger but is especially crucial in kittens/young adult cats and cats that spend time outside.”

In the wild, cats move a lot more than their indoor cousins. They amble about, stalk prey, climb trees and stealthily scurry from one hiding spot to another as they hunt and gather their food. They’re anything but bored.

“For indoor cats, though, boredom is a big aspect for them, and cats are persnickety and persistent,” Dr. Murphy says. “So, a lot of times, they’re asking for attention, but the owners misinterpret their cues and think they’re always hungry and asking for food. And, of course, if you turn around and offer them food, they’ll happily take it!”

This can make the cat pack on the pounds, Dr. Mazepa says.

“When cats are eating out of boredom, they may have no other clinical signs other than weight gain,” she says. “In some cases, other behavioral problems stemming from boredom will occur, such as barbering (i.e. overgrooming, often on the belly or legs) or inappropriate urination (i.e. spraying or urinating outside of the litter box).”

A cat who seems always hungry but is otherwise healthy might need some environmental enrichment, Dr. Murphy says.

“Feed them multiple small meals throughout the day using a treat releasing toy or little mice toys that you can put food in, and then put them all around the house so the cat has to hunt for the mice to get the food,” Dr. Murphy says. “So, from an enrichment perspective, keep them busy during the day.”

Pet parents can also spend more time with their pals and provide visual stimulation, like hanging bird feeders outside the windows, for entertainment when they’re gone during the day, Dr. Mazepa says.

Poor Quality or Not Enough Food

Finally, the cat’s food itself—or the lack of it—could be why your cat is always hungry. If the food is of poor quality or they aren’t eating enough of it, that could make them incessantly beg for food, Dr. Mazepa says.

Dr. Murphy agrees. “There are certainly times where owners think they’re feeding the appropriate amount of food and it simply is not enough for the cats to maintain their weight,” she says. “So, they do seem hungry.”

Other signs of malnutrition include weight loss or a poor haircoat, Dr. Mazepa says.

“This problem would be diagnosed by ruling out other causes of increased hunger (as outlined above), as well as questioning the owner very specifically about their cat’s diet and volume of food fed each day,” she says. “This problem is one that is easily addressed with client education.”

If your cat appears to be hungry all the time, despite feeding them the right amount of a good quality diet, check in with your veterinarian. A simple test can point to a solution—and ensure your feline friend is getting the nutrients they need to thrive.