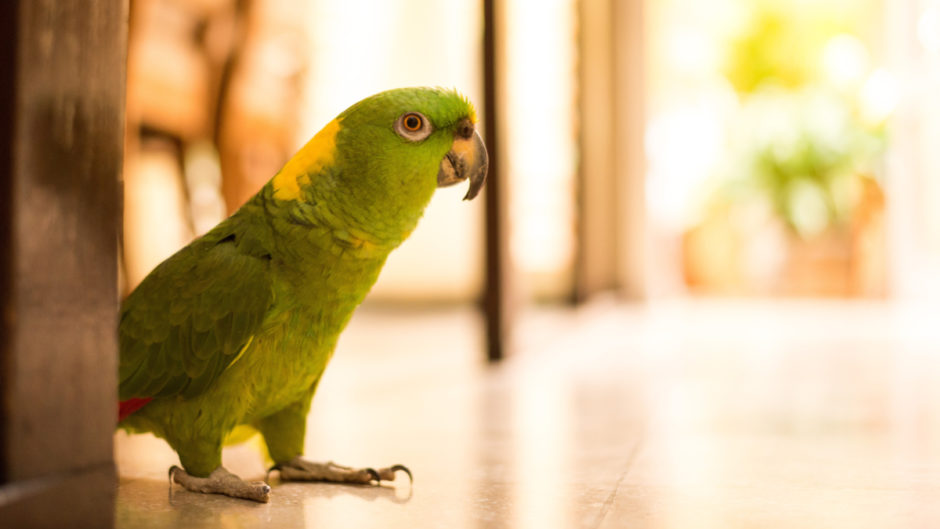 Obviously nobody wants to turn his or her bird into a sleep-deprived or cabin-fever suffering basket case. Fortunately, there are steps you can take modify the dark and light cycles for your pet birds to keep them healthy and happy. Avian veterinarians and bird behaviorists generally make the following recommendations:

Most pet birds do best with between 10 and 12 hours of darkness a night. This is a generality; some species do better with a little more than 12 hours of sleep, others like less than eight, but most need somewhere around the 10 to 12 hour mark.

The majority of parrots are tropical or subtropical, meaning they live near the equator where there are 12 hours of darkness every night,” noted Ken Welle, DVM, an avian veterinarian who practices in Illinois. In the wild, parrots are awake from sunrise to sunset, which amounts to about 12 hours on average, and sleep from sunset to sunrise the other 12 hours in the day.

Many pet parrots do well on a sunset-to-sunrise sleeping schedule; they get the amount of sleep they need, and they’e awake when nature designed them to be awake and asleep when nature designed them to be sleeping. Reality is a lot of bird owners are away at work all day and don’t get home until 5 or 6 o’clock in the evening, which during much of the year may be after it’s already gotten dark outside or just a short time before sunset. Obviously if these people “put their birds to bed” at sunset that doesn’t leave a lot of time for interacting.

You can let your birds stay up past sunset, “but then you’re going to need to allow them to sleep later in the morning,” said Julie Burge DVM, a veterinarian and bird breeder in Missouri. That means if you leave for work when it’s still dark in the morning, you shouldn’t turn on the lights in the room where you keep your parrots, nor should you disturb them in any way. Let them sleep as long as they can. Unless their bird cages are covered, birds usually awaken when the sun comes up. Keep in mind that your bird should have at least 10 hours of darkness, so if the sun rises at 6:30 a.m., you should not keep your bird up past 8:30 p.m. the night before.

But, you may ask, what if you work 2nd shift or you’re taking night classes and you don’t get home until late at night? Your parrot may have been sleeping for several hours before you get home. Is it okay to wake him up so that you can interact with him a while? “Yes,” said Larry Nemetz, DVM, an exotics-only veterinarian in southern California. “Your parrots do not have to have 10 straight hours of uninterrupted sleep each night. It’s okay to break up their sleep, especially if that’s the only way you can have time to play with them.”

But that doesn’t mean you should suddenly wake them up from a deep sleep and immediately put your hands in their cage. If you do, you’re bound to be bitten. “Just turn on the lights, let them wake up slowly so they don’t freak out, and give them a half hour or so to gear up for some play,” Nemetz suggested. “Don’t just go in the bird room and startle them awake and expect them to immediately be ready to start playing with you.”

Once the late-night play session is over with, most parrots have no problem going right back to sleep. Again, you should try to ensure your bird has 10 hours of darkness for sleeping, so if it has already been sleeping for five hours before you got home, make sure you don’t keep it up so late that it is not going to have five hours of darkness left for sleeping.

You may also need to take some steps to create an environment for your parrot that is more conducive for sleeping. Kim Bear, a parrot behavior consultant in Florida, recommends bird owners provide their parrot with a “sleep cage.” This would be a smaller cage that’s just used for sleeping.

The sleep cage should be put in a room that’s completely dark and quiet, where the bird is not going to be disturbed—such as a spare bedroom, laundry room or even a large walk-in closet. During the daytime the bird would be housed in its regular, larger bird cage or bird stand in the family room, den or other highly trafficked part of the house. But when it’s time for the bird to go to sleep, it would be transferred to its sleep cage.

Bear said, “A lot of people keep their parrot next to their television in the family room, but oftentimes the parrot can’t get to sleep even if the lights are dimmed because there might be a lot of noise coming from the TV, the family might be talking or laughing, maybe people are coming and going, and so it makes a lot of sense to move the parrot to another part of the house at night where he’s not going to hear all that racket.”

An additional step you might want to take is to place a cage cover over your bird’s cage when it’s time for it to go to sleep. This is especially a good idea if you have to keep your bird in a room where the lights are kept on late at night, but even birds that sleep in a nighttime cage in an isolated room can still benefit from a cage cover.

“The cage cover prevents pet birds from seeing a lot of things that might startle them, such as passing car headlights shining through a window and stray dogs or cats or wild animals that might be wandering outside,” said Ann Vann, longtime bird owner and co-owner of Vann’s of Louisiana. You can use a dark towel or blanket to cover the cage or a specially made cage cover. (Note: For some birds, such as cockatiels, complete darkness may cause problems with night frights, and it may be necessary to leave part of their cages uncovered and plug in a night light to allow them to see.)

For people who keep their birds up late and there’s no way the birds would get 10 hours of natural darkness before sunrise, Burge recommended installing room darkening drapes or blinds where the bird sleeps. That way if your birds were up until 11 p.m. or midnight, you could keep the blinds shut and the room dark until 10 o’clock the next morning to allow your birds to still get 10 hours of darkness. If you leave for work earlier than that, you can put the room lights on a timer so that they will come on at the right time in the morning to awaken your birds.

3. Adjust Light/Dark Cycles Depending On Species, Season And Behavioral Challenges

Some adjustment in your bird’s sleep schedule may be necessary now and then. If your bird is a species that comes from one of the more temperate regions of the world (for instance, you might have a Meyer’s parrot, which is native to southeastern Africa, or a Deryban parakeet that originates from Tibet), it may need a little more variation in its light/dark cycles during the year than the straight 12 hours of light and 12 hours of darkness that is ideal for a species native to equatorial regions (such as an orange-winged Amazon parrot whose home range is the Amazon rain forest).

“The further away their home range is from the equator, the more seasonal changes are going to be significant,” said Don Harris, DVM, an avian veterinarian in Florida.

So, if you’ve got a bird from one of the more temperate regions, it may need 10 hours of light and 14 hours of darkness in the winter months, and 14 hours of light and 10 hours of dark in the summer months. Some people go so far as to try to mimic the light/dark cycles of their birds’ home range, so they will gradually start shortening the days for their birds when moving from mid-summer to winter and lengthening the days when moving from mid-winter to summer. This is something you might want to try if you’re got a species from one of the temperate regions. But if your bird is from the tropics, where the hours of light and darkness are even and consistent year-round, it probably won’t need the seasonal variation.

You may also want to modify the light/dark cycles, depending on whether you want to encourage or discourage “breeding mode” in your birds. If you’re got a pair of birds and you wish to stimulate reproductive activity, Welle suggested you gradually increase day length from 10 hours daily to about 16 hours daily.

On the other hand, if your bird is exhibiting behavior problems related to reproductive hormones (this could be anything from aggressive biting in a sexually mature cockatoo or Amazon, to chronic egg laying in a cockatiel), Welle recommended limiting the bird to eight to 10 hours of light daily to try shut down those reproductive hormones. You will probably need to use room darkening blinds and/or cage covers to artificially bring-on nighttime earlier for these birds. This is something you would do on a temporary basis. Once the hormonally-related behavior has stopped (it may take several weeks or more to curtail the behavior), then you can gradually start lengthening the days back to what is normal for the bird.

It’s worth noting that decreasing the photoperiod (light cycles) is not the solution for every hormonally-charged bird. “For birds from temperate to polar regions, photoperiod is the most important influence on reproduction. But the closer to the equator the bird is from, the less influence it may have,” Welle said.

One final important consideration relating to photoperiod is the type of light your bird is exposed to. Ideally, pet birds should have some exposure to natural light every day. That requires them to actually go outdoors. “Indoor birds do not receive the benefits of the UV light emitted by the sun,” noted Gregory Burkett, DVM, an avian veterinarian in Durham, North Carolina. Most window glass is treated to prevent ultraviolet (UV) rays from passing through and [rays] do not reach the bird.

Exactly how much exposure to natural light do birds need? Harris recommended that pet birds get between four and six hours of unobstructed skylight a day, but if that’s not reasonable even a couple of hours a day outside will help. “The sun doesn’t have to directly hit the bird, but they have to have unobstructed sky,” Harris said. “Being outside under a tree is okay as long as the sky is visible. Being under a patio is OK too, as long as there is no screen between the bird and the sky.”