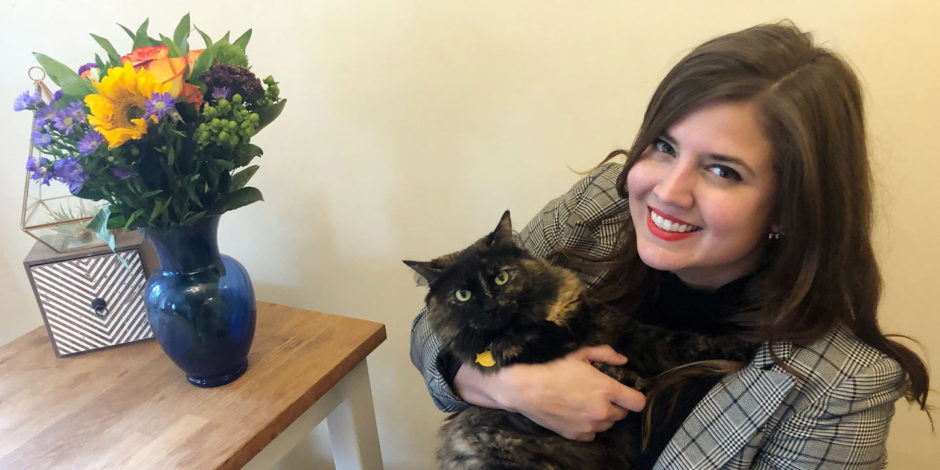 I grew up with pretty much every type of pet imaginable. Dogs, cats, hamsters, birds, fish, lizards, rabbits, guinea pigs, turtles—you name it, I took care of it. But it took me until I was well into my adult years to get a pet of my own.

I had always thought I was too busy. I moved too much. I never knew where life would take me next. How could I have a pet when my life was so unstable, so unpredictable? It wasn’t until I finally got my cat, Luna, that I learned life is always going to be unpredictable. But it’s better with a pet.

The first time I ever experienced life without a pet was when I went away to college. It was a tough transition. I would be sitting at the desk in my dorm room and absentmindedly reach my hand down to pet our family dog, forgetting momentarily that I was at school, not at home.

When I moved into a house off campus, I never realized how quiet—and creepy—a home can be without a pet. When you have an animal in the house, any sound you hear can be attributed to their general shenanigans. That rustling sound coming from the closet? It’s the cat finding a place to hide. That thump you heard in the living room? It’s just the dog jumping off the couch. Hearing a random sound in your home when you’re all alone without a pet is a completely different story. Every sound is either a robber or a ghost—or at least it was in my mind.

Despite becoming irrationally freaked out by things that go bump in the night, I managed to remain pet-less for several years. I could barely afford to feed myself on the salary of my first job out of college, working as an editorial assistant for a weekly newspaper. How could I afford a pet? It didn’t help that I moved nearly every other year for the better part of a decade—including across the country from my home state of New Jersey to Southern California, then up the Pacific Coast to Seattle, then back to the East Coast and back to Southern California again. Surely all that travel would be no life for a pet, right?

Several jobs and a dozen moves later, I finally gave in and brought home a pet of my own.

A Leap of Faith

It all started innocently enough with casual trips to a local animal shelter. My boyfriend, Jordan, and I would go just to play with the kittens and cats. But deep down inside, we both knew it was a ruse. We were looking for a cat to take home.

For the first time in my life, I thought it might finally be the right time to get a pet. I had a good job, Jordan and I had our own place together, and I didn’t plan on traveling or moving any time soon.

We found Luna at the spcaLA in Long Beach, California, on what was probably our umpteenth trip to the shelter. She looked less like a kitten and more like a miniature wolf—a miniature werewolf, actually. 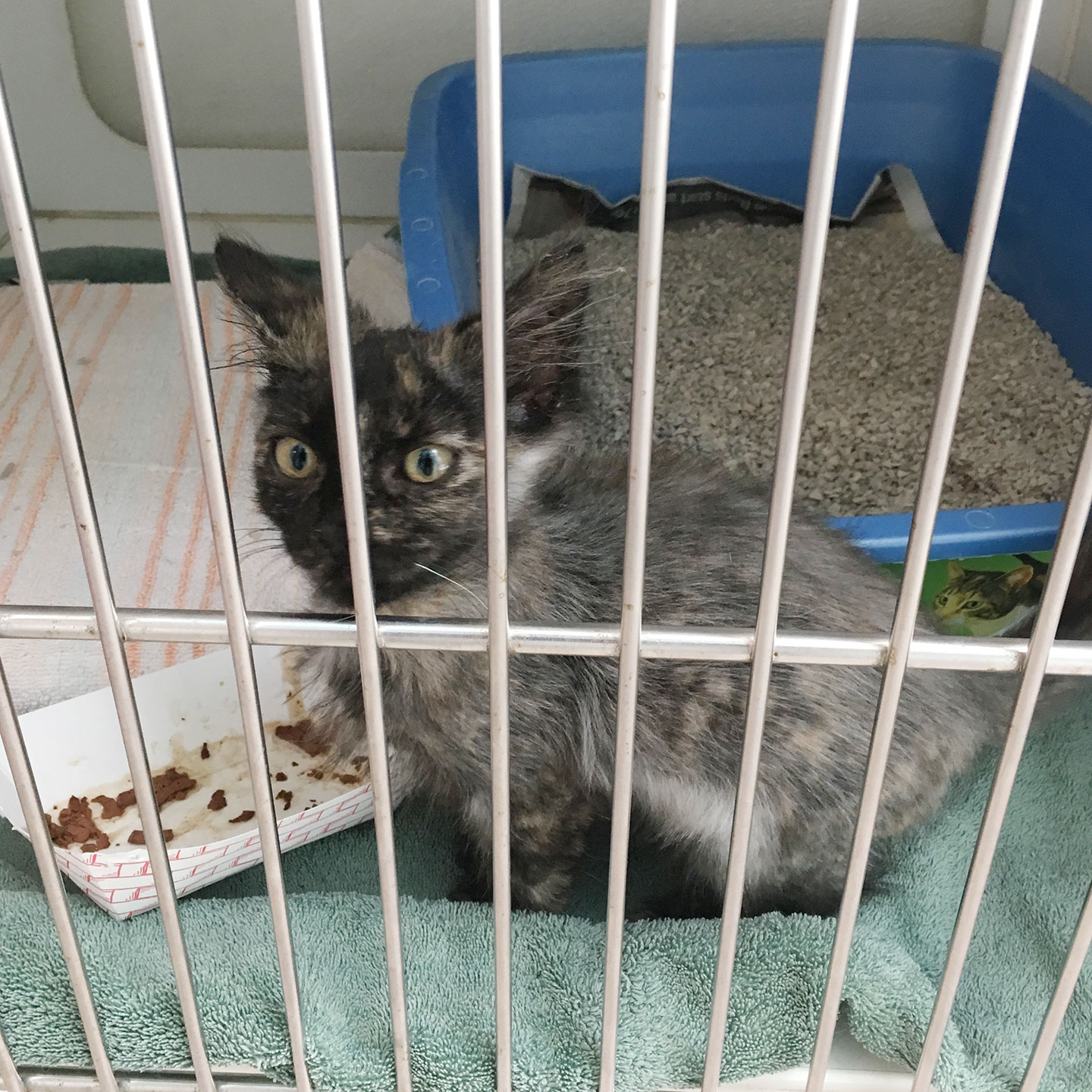 Luna at the shelter. She had an interesting look.
Photo: Stephanie Brown

She had long white hairs that sprouted wildly through her darker tortoiseshell fur, giving her a greyish coloring. She had big, pointy ears that were much too large for her head. And she had yellow eyes that glowed brightly behind the bars of her temporary cage. We were in love and adopted her on the spot. We named her Luna after the moon, a nod to her werewolf looks.

Having a pet in my life again was everything I had wanted and more. The snuggles, the sandpaper kisses, having someone greet you when you came home from work (yes, cats DO get excited when you come home!). 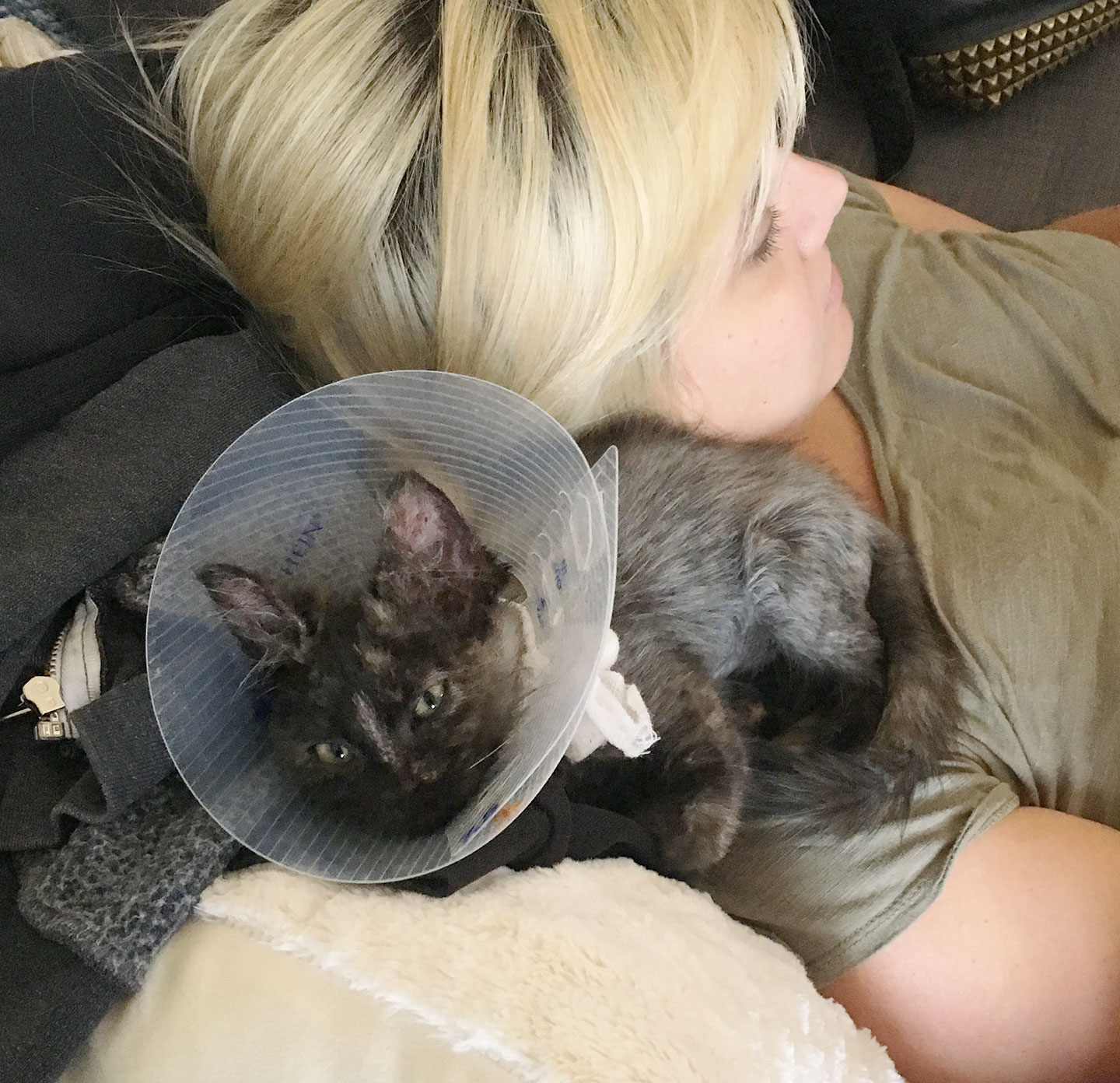 After her spay surgery.

Having Luna in the house was a like a constant game of hide and seek that you didn’t know you were playing. She favors dark hiding spots on the ground—under the couch, in the back corner of the closet, under the bed, under the blue Ikea shopping bag we used to carry laundry to the building’s laundry room.

You never knew when she was going to pop out of some nook and Spider-Man her way up your legs. All was well. Or so I thought.

My Constant Amid the Chaos

Why is it that just when you think things are going your way, you get a reality check?

Shortly after adopting Luna I was laid off from my job. Those old thoughts of wondering how I could afford to feed myself let alone a pet came rushing back. Luckily, I quickly picked up a contract gig that allowed me to work from home.

Luna and I bonded a lot during that time, and I loved being able to watch her grow and learn every day. Some days she’d run around the apartment like a bat out of hell, madly attacking my fingers as I typed and fighting firece battles with the blinds. Others, she’d prefer to curl up on my lap and sleep the day away. 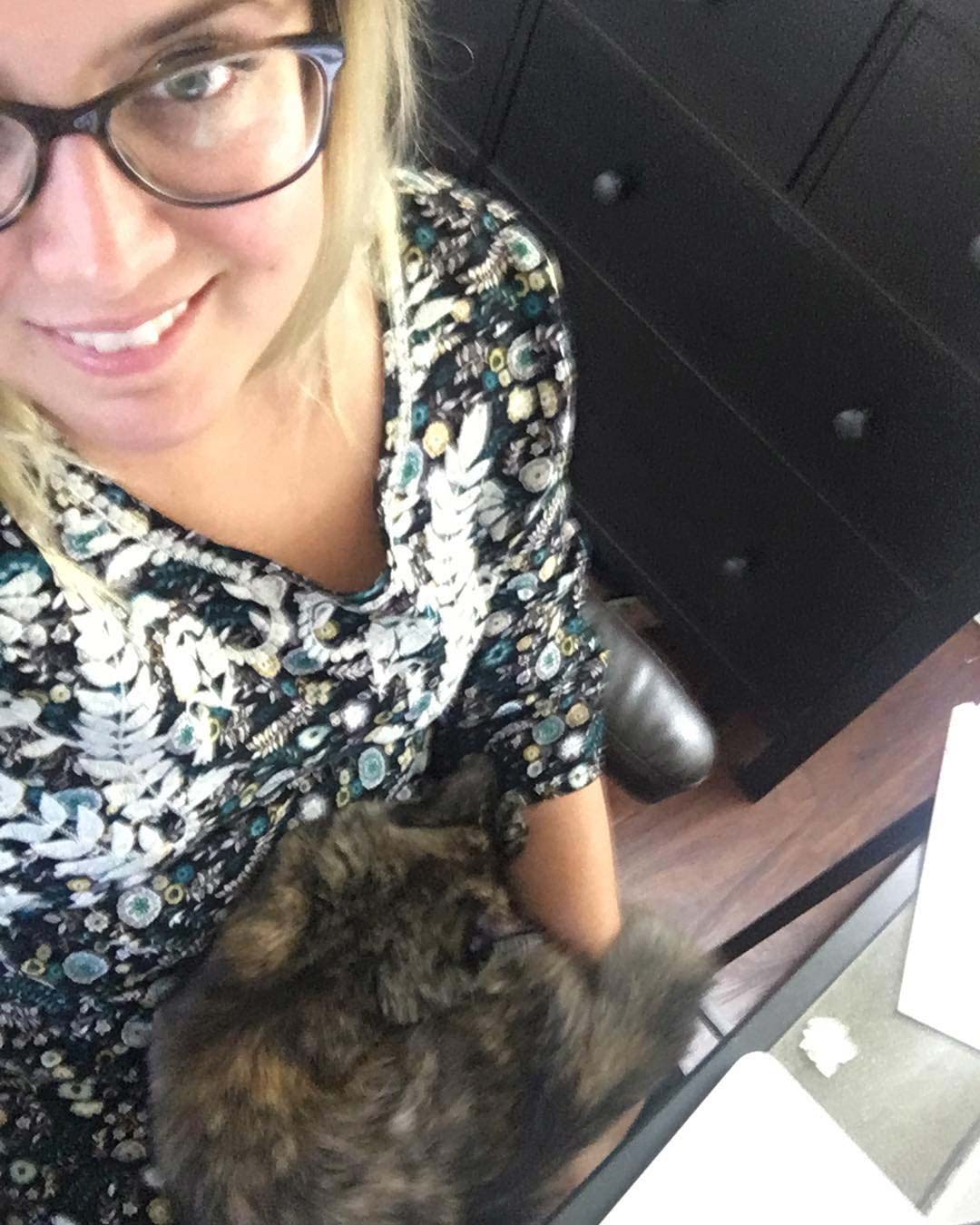 Sleeping on my lap while I work.

A few months later, Jordan and I went through a rough patch, and he moved out. Luna’s nightly snuggles made sleeping alone bearable. Her 2 a.m. zoomies, while they disrupted my sleep, gave me comfort knowing there was another being in the apartment with me. Even though she was all of 5 pounds and would definitely hide under the dresser if another person came into the apartment, she made me feel safe. When something went bump in the night, I knew it was her. 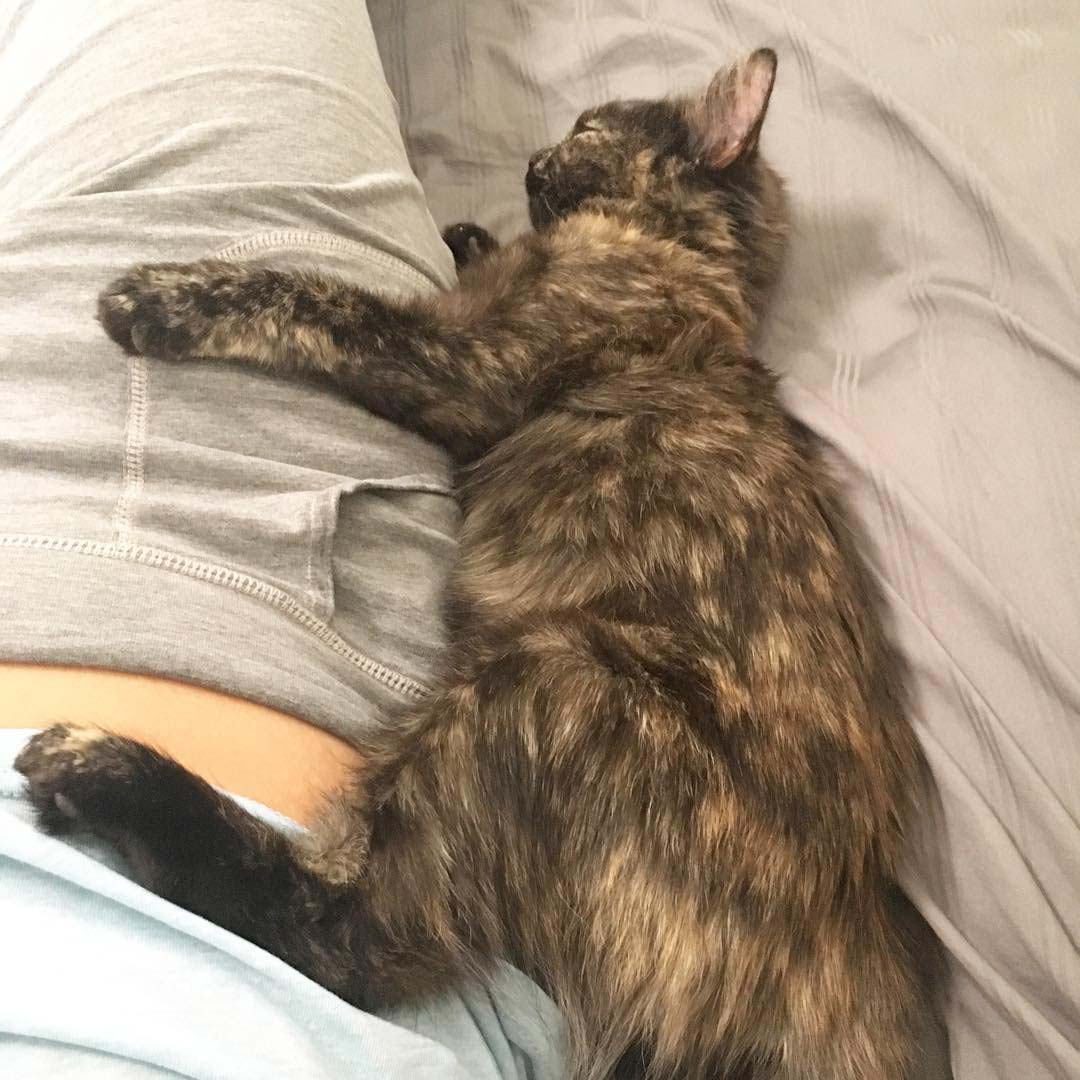 Then, a month before Christmas and with my contract job nearing completion, I was given a notice from my landlord that I had to move out. Being that my lease had expired and switched to a month-to-month agreement, there wasn’t much I could do about it. Here I was having to move less than a year after getting Luna. Not at all what I had planned.

I decided to move back home to my parents’ in New Jersey to regroup. That move marked Luna’s first flight—a cross-country flight in which one hour after leaving LAX, the plane had to turn back around because of some mechanical or engine issue I now forget. Needless to say, it was not a smooth trip. Luna handled it like a champ, probably even better than I did.

Within a couple months, I landed a new job at Chewy that required me to relocate to Florida. Now I was getting ready to move for the second time that year. Jordan, who was back in the picture but still living in California until he could finish his graduate program, flew to New Jersey to join me for what would mark Luna’s first road trip. Again, she took to travel like a pro, even seeming to enjoy the new hiding places the hotels had to offer. 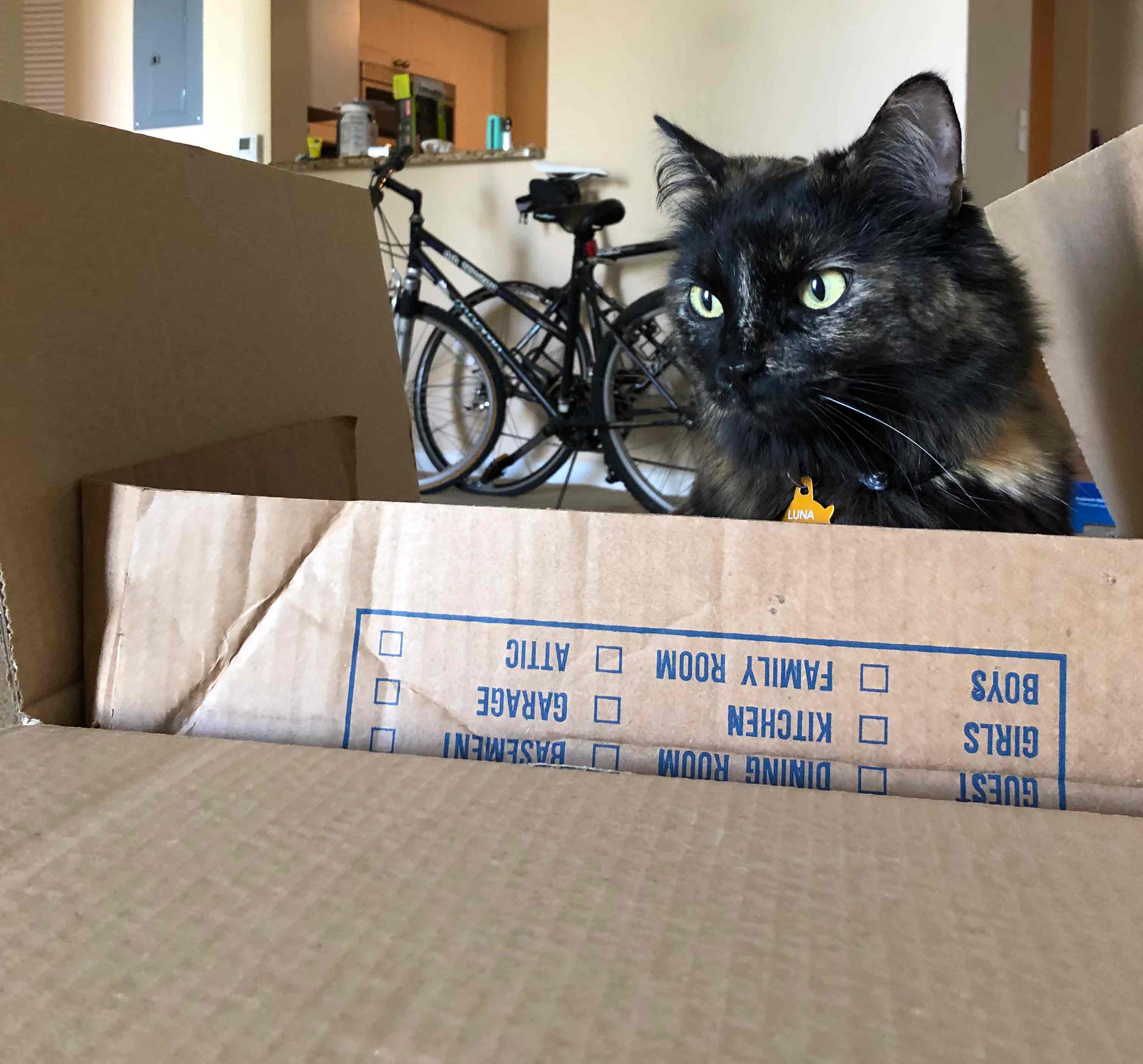 Once in Florida, it was me and Luna again. During this time, Luna was my closest confidant and, frankly, my only friend in a new state. Every day after work, I’d tell her about my day and she’d meow back, telling me about hers. She watched TV on the couch with me, spent many evenings out on the balcony with me watching the iguanas climb trees and slept with me every night—right in the middle of my king-sized bed, of course. 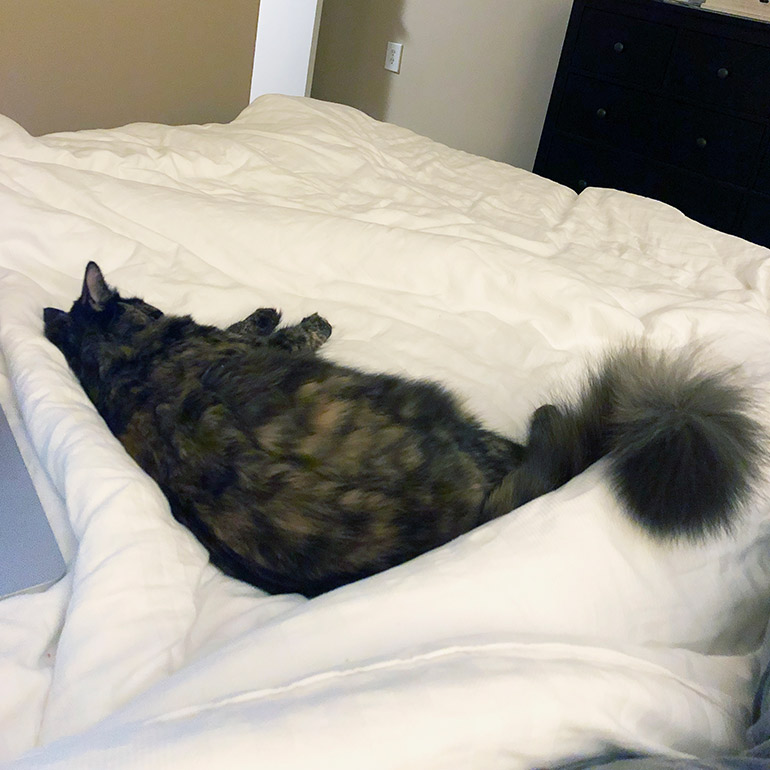 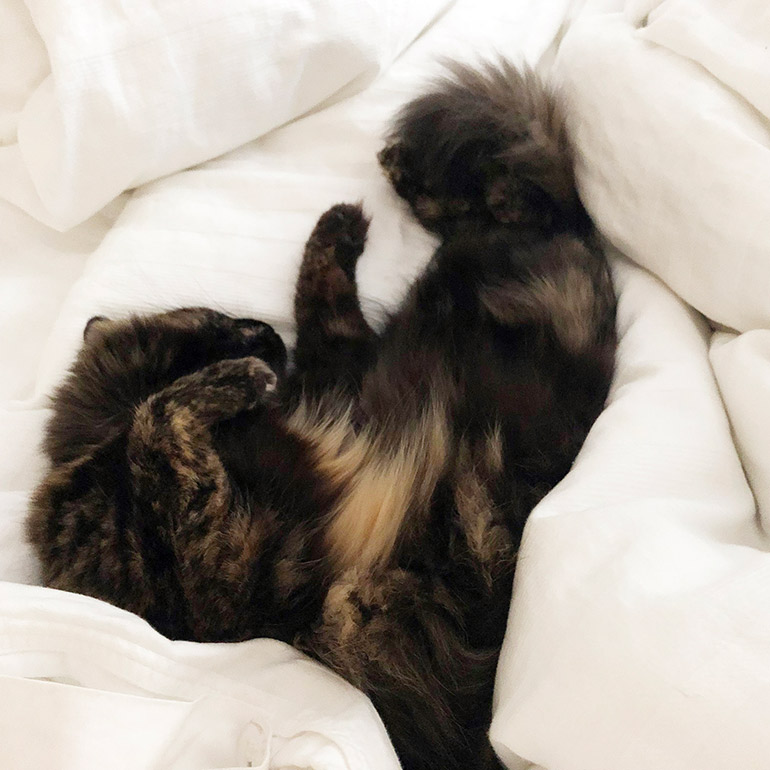 Today, Jordan, Luna and I are reunited and living a quiet life in Florida. Luna watches TV on the couch with us and loves to sit on the balcony, although now she prefers to sleep on an old suitcase next to the bed. (I think her feeling is, if she can’t have basically the whole bed to herself, she’d rather have her own bed to spread out on.)

The last two years have been a bit of a whirlwind. Through good times and bad—and there seemed to be a lot of bad—Luna has been by my side (or rather, underfoot) the whole time.

For so many years, I thought I wasn’t ready for a pet. I thought I didn’t have the type of lifestyle that was conducive to it. When I think back to all the things Luna and I went through in only our first two years together, I can’t believe I ever thought having a pet was out of the realm of possibility. I had moved twice, lived in three different states, held three different jobs and went from living with someone to living alone to living with someone again. And yet, we did it. Together. 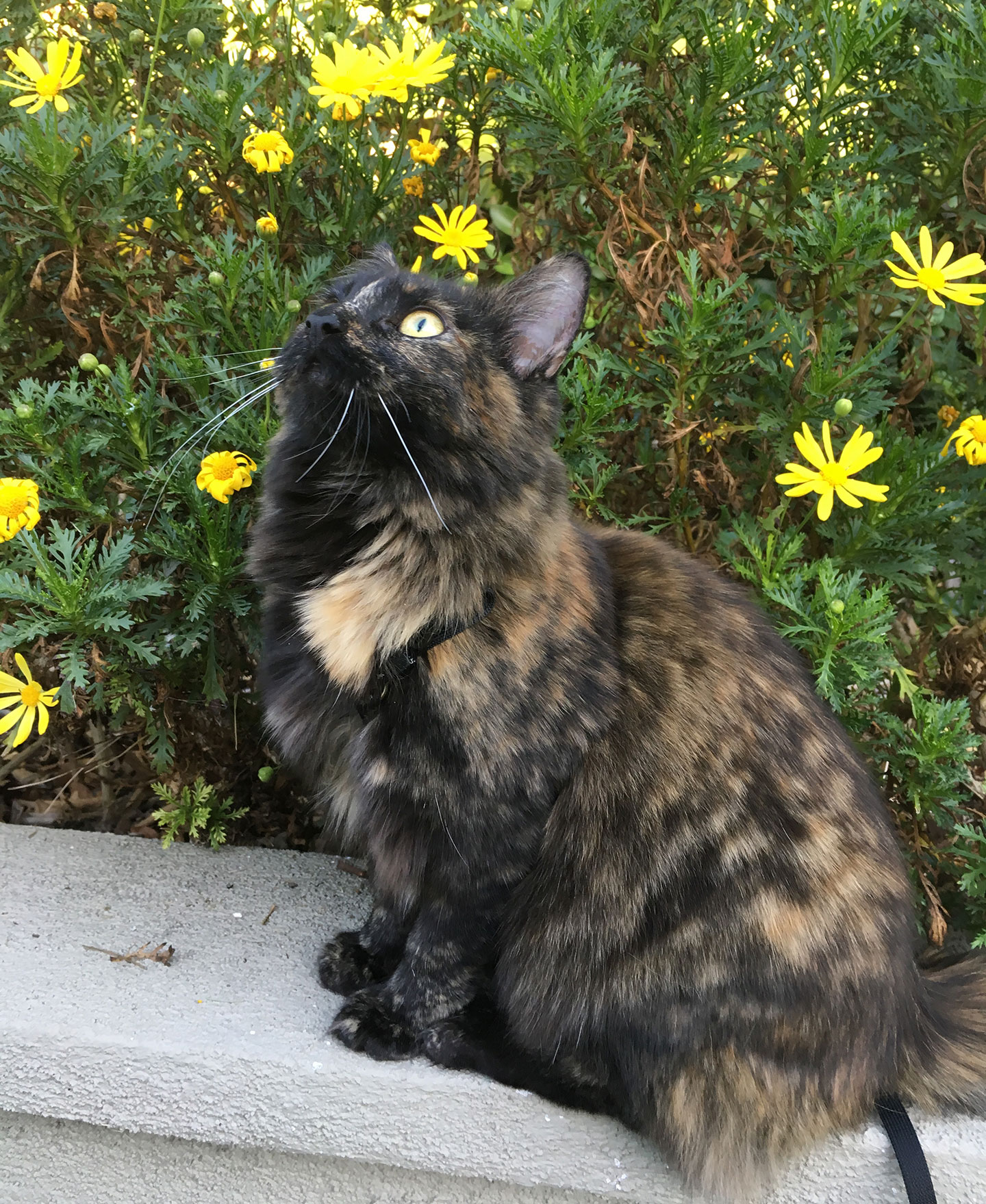 Luna has not suffered one bit. She is a spoiled gremlin who has all the catnip and toys from Chewy she could ever want. And I obviously have greatly benefited from her being in my life. She has been my one constant, and you don’t realize how much you need that kind of unconditional love until you have it.

I’m not advocating getting a pet when you absolutely can’t afford to properly care for one. But don’t put off getting a pet because you’re waiting for “the perfect time.” That time may never come, and if the past has taught me anything, it’s that the perfect time won’t stay perfect forever. In my experience, having a pet has made those unperfect times so much better. Whatever happens (and something will inevitably happen), I know I’ll have Luna waiting for me at home—no matter where home is.

What the Loss of a Pet Has Given My Family

By: Stephanie Brown
Stephanie Brown is the Senior Editor of the Chewy blog, Pet Central. From a very young age she’s loved animals and has had the honor of sharing her life with many pets, from cats and dogs to parrots and guinea pigs. She is an award-winning journalist who has spent most of her career creating content about what she loves most in the world—pets. Her favorite pastime is thinking up new and ridiculous names to call her rescue cat, Luna. (For the record, they are Luna Moon, Looney, Tunes and Stink Butt.)