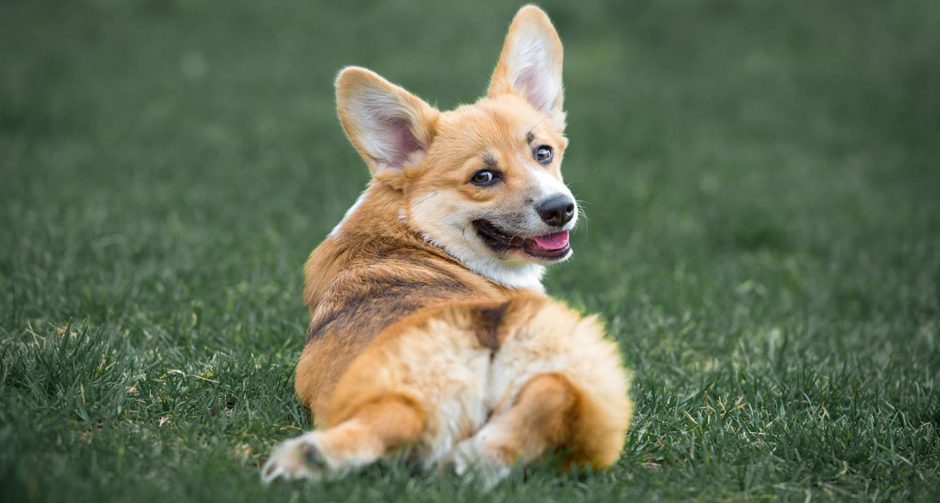 It’s not quite a splay, not quite a scooch, but it’s so darn cute. And since there wasn’t a word available to aptly describe the sheer adorableness of this dog stretching phenomena, the internet came up with one—sploot. As in, the Corgi sploot.

“Splooting is when an animal lays on their stomach with one or both hind legs stretched straight behind them,” says Animal Humane Society veterinarian Dr. Angelica Dimock.

A dog lying down in a full-on sploot looks like a superhero in flight or a frog mid leap, which is why it’s also known as “frog legs,” “dog froggin’” and “frog doggin’.”

The sploot has several variations. We have:

Corgis are the most popular splooters right now, thanks to social media sites like Instagram. In fact, the UK’s prestigious Kennel Club credits social media for the Corgi’s recent resurgence in popularity, especially the Pembrokeshire Welsh Corgi, a breed made famous by Queen Elizabeth II. Despite their royal connections, Corgis were experiencing a slump in their registration numbers in the UK, according to the Kennel Club. Now, thanks in part to social media and the thousands of pics out there of the Corgi sploot, the breed has experienced a comeback with a 54 percent increase in registrations since 2015.

Corgis are everywhere from cute coffee mugs like the Dimension 9 Dog Breed Coffee Mug to Christmas decorations like the Old World Pembroke Welsh Corgi tree ornament. Corgi fans are also showing their love for the short-legged breed on their cars, with magnets like this “I Love My Corgi” magnet.

But Corgis aren’t the only ones enjoying the splooting spotlight. Other dog breeds have been spotted splooting, too, including French Bulldogs, Pugs, Dachshunds and Poodles. And it isn’t just for small breeds; splooting is also big among the big breeds like Pitbull Terriers, Labrador Retrievers, Newfoundlands and German Shepherds. Even cats put their legs back there like they just don’t care (because we all know they don’t).

The Sploot Is More Than Just Cute

The sploot is actually a comfortable way for your pet to relax. In fact, dogs and cats sploot for the same reason we do downward dog and other exercises—to limber up.

“It actually helps to stretch their hips and keeps them flexible,” Dimock says. “It may also help to cool them down by having their entire abdomen laying flat on a cool surface.”

Splooting can also help you spot hip issues in your pet like dysplasia. Hip dysplasia occurs when the hip joint no longer fits properly into the socket. If your dog is a regular splooter and begins to display signs of hip pain like favoring back legs, limping or walking irregularly, consult your veterinarian.

Why Doesn’t My Dog Sploot?

Just because all dogs can sploot doesn’t mean they want to. It may not be comfortable or relaxing to them. Think of it from the human perspective: some of us prefer to sleep on our backs while others choose to sleep on our stomachs or sides. The same goes for our pets. Other factors may make splooting uncomfortable like weight, sore joints or rigid hips due to age or breeding. Whatever the reason, if your dog is not a splooter, don’t try to force him into the position as it can cause injury or create a negative association that can affect your bond with your pet.

Other Social Media Buzzwords To Know

Now that you’re schooled on the whole splooting craze, here are some other internet terms to describe pet cuteness that you can use for your next Instagram post:

Chris Brownlow has been writing about pets for over 10 years. As a writer who believes in immersing herself in her topic, she has tasted more than 20 different flavors of dog and cat food while working on an advertising campaign for PetSmart. Prior to her pet days, Chris was a print and digital journalist at The Tampa Tribune and The Virginian-Pilot.