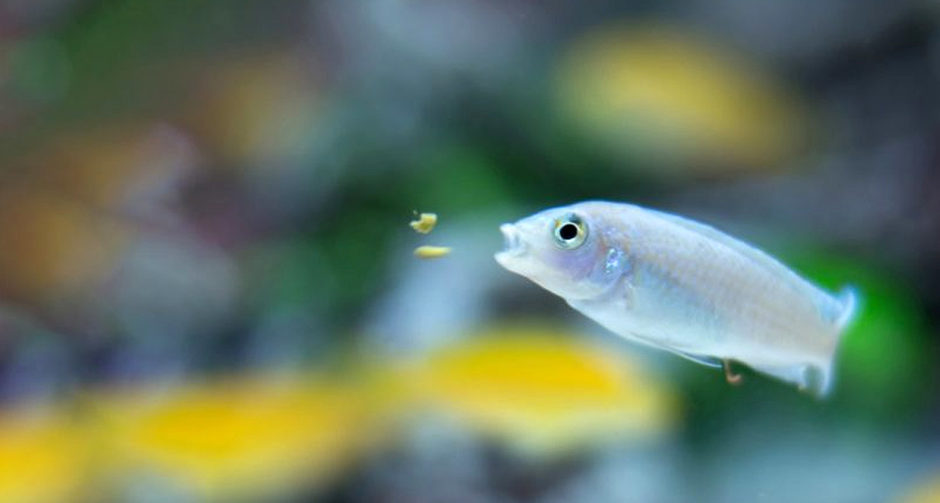 The food provided to your fish must be safe, nutritionally balanced and appropriate to the livestock.

Flake and pellet foods are available in a range of formulations designed for specific types of fish: community fish, saltwater fish, herbivores, carnivores and so on. These can form an excellent staple diet for most fish.

However, once exposed to air, the nutritional value of flake and pellets quickly declines; what was once appetizing and nutritious becomes stale and functionally worthless. Flake and pellet foods should be discarded within three months of opening.

Flake and pellets are often low in fiber, leading to constipation, and this in turn can cause swim bladder disorders and bloating in your fish. High-fiber foods such as Daphnia and vegetable foods will help to prevent this.

Freeze-dried fish food contains valuable fiber, as well as an excellent balance of nutrients. Freeze-dried fish food can be used successfully either as the staple fish food item or as a supplement to flake and pellet foods. Freeze drying kills any potential pathogens, making such foods very safe, and most fish seem to find them highly palatable.

The key drawback is expense: compared with frozen fish foods, freeze-dried fish food costs a lot for what you actually get.

Aquarium stores sell a wide variety of frozen fish food items ranging from zooplankton to whole fish. Though less expensive than live foods, frozen foods are just as readily accepted by aquarium fish. This makes them valuable for feeding fussy or predatory fish. Frozen fish food is also less likely to carry pathogens than live fish food, and some manufacturers irradiate the food to make sure that it is completely safe.

Because it is unprocessed, frozen fish food is nutritionally excellent and also tends to be high in fiber. No one fish food should be used exclusively, though, and it is a good idea to alternate between foods through the week: mysids one day, chopped mussel the next and so on. Frozen food-blends tailored for community fish, cichlid fish, saltwaterfish and so on sidestep this problem by including a carefully chosen mix of foods, sometimes with added green foods and vitamins.

Seafood sold for human consumption can also be used, including whitebait, squid, clams, mussels and prawns. Unshelled prawns and shrimp are of particular value for feeding triggerfish and pufferfish by wearing down their fast-growing teeth.

Serving feeder fish as food is controversial, with many experienced aquarists rejecting them as unnecessary and unsafe, regardless of any ethical dimension. Cheap feeder fish are reared in squalid conditions and very likely to carry diseases and parasites, and should never be used. The most commonly sold feeder fish are minnows and goldfish, and these are too rich in fat and thiaminase to be of value. Over time the fat causes damage to the internal organs while the thiaminase breaks down vitamin B-1. Noted saltwater aquarist Bob Fenner has gone so far as to state that the use of feeder goldfish is the prime source of lionfish mortality in home aquaria.

Why use feeder fish at all? Some fish are predators in the wild, and offering them live fish may be the easiest way to get them to eat in captivity. But frozen fish foods or alternative live foods (see below) can almost always be used instead.

If you must use feeder fish, then the only safe approach is to raise your own. Livebearers are recommended, being nutritionally balanced as well as easy to rear. They should be maintained in a healthy environment and provided with a good-quality diet.

The value of live food is that they are immediately recognized as prey even by newly imported wild-caught fish. Otherwise piscivorous fish will usually take earthworms, river shrimp and large insects, while fussy bottom feeders, such as spiny eels and mormyrids, will usually eat worms and insect larvae.

Live food is expensive and inconvenient; frozen fish food in particular is just as readily accepted by most fish and far less costly. Aquatic live food can also introduce pests and diseases. Among the pests known to hitchhike their way into aquaria alongside live food are snails, hydra and dragonfly larvae. Tubifex worms are notorious for transmitting diseases caused by myxosporidian and microsporidian parasites, such as nodular diseases and whirling disease.

Brine shrimp are often promoted as being very safe compared with other live food, and this is certainly true, but adult brine shrimp are nutritionally poor and should not be used as anything more than a periodic treat for your fish.

Algae And Other Green Foods

Herbivorous fish readily accept Sushi Nori, a Japanese seaweed-based food widely sold in Asian grocery stores. It can be broken up to feed small fish or attached to submersible “lettuce clips” to allow larger fish to nibble at their leisure. Vegetables can also be used. Iceberg lettuce and cucumber are readily accepted, but their nutritional value is very low; much better options include blanched curly lettuce, zucchini and tinned peas. Grazing fish like plecos enjoy sliced carrots and sweet potato.

Wood is an important food item for some fish. Plecos generally seem to need some wood in their diet as a source of dietary fiber, but those in the genus Panaque actually digest wood and will not do well if maintained without access to it.

Fish feed in a variety of different ways, so how you feed your fish will depend upon what species are being maintained.

Small community fish like tetras and livebearers should be fed once or twice per day, and need only as much food per meal as the fish can consume within a minute or so. There should never be any leftover food. Use floating fish food for surface-feeding fish and sinking fish food for species that stay close to the aquarium’s substrate.

When feeding your fish, inspect your livestock. Start by counting the fish to make sure they are all present. Check the fish for signs of damage or disease. Often the first sign of problems with fish health or aquarium water quality is odd behavior, particularly at feeding time. So, if one or more of your fish isn’t interested in its food, investigate further.

Properly fed aquarium fish should have gently rounded abdomens. Overfed fish have a bloated look and will often be lethargic. Chronically underfed fish will look emaciated, in many cases with a distinctively concave ventral profile.

Saltwater fish can be divided into four basic sorts, as far as feeding goes: bold feeders, plankton-eaters, herbivorous grazers and micropredators. Bold feeders are those saltwater fish such as damselfish that greedily swim into the open at feeding time. Feeding these fish one or two modest meals per day works well.

Plankton feeders can be trickier to feed, the key thing being that they need multiple small meals per day to do well. Anthias are the classic example of plankton-feeding fish, and because they need several meals per day, they easily starve in captivity.

Herbivorous grazers are often bold feeders, as well, but in addition to flake or frozen food, they also need green foods. Surgeonfish and saltwater angelfish are classic herbivores. They need constant access to live algae or some suitable substitute, such as nori.

Micropredators are things like seahorses and Mandarinfish that consume small animals of various types. In mature, very large aquariums, they may be able to find sufficient numbers of copepods and other small crustaceans to do well, but relying on this has lead to the demise of countless fish. Instead, the aquarist will need to provide live or frozen alternatives at least once per day. Because of their particular needs and often rather slow feeding habits, micropredators should not be mixed with community species.

While some invertebrates will find their own food in reef aquariums, algae-eating snails for example, others need the aquarist to supply food.

Feeding nocturnal fish can be difficult because the aquarist cannot always tell if one particular fish is eating the food put out for it. This is especially the case with nocturnal predators like spiny eels and mormyrids. When maintaining these slow-feeding species, do not mix them with anything that might eat their food, such as catfish or loaches. Feed nocturnal predators around five times per week.

Most fish are predators, of course, but large predators fall into their own category for several reasons. First, they do not need to eat every single day. Indeed, really big predators, such as large catfish and piranhas, may only need to be fed a couple of times per week.

Second, these fish have a tendency to gorge themselves in the wild, eating one big prey item and then not eating anything else for several days afterward. It is debatable whether this is a sensible approach in the aquarium because the resulting spike in ammonia after a massive meal can cause major problems, in terms of water quality. Some predators are also prone to regurgitating undigested food if they’ve consumed too much, making things even worse. The safest approach is to offer small meals several times a week, perhaps even every day. As ever, the goal is to maintain a gently rounded rather than swollen abdomen.

Finally, there’s some anecdotal evidence that the use of live rather than dead prey makes predatory fish more aggressive. As discussed last time, feeder fish should be avoided.

Herbivores do best when given constant access to suitable green foods. Because plant material is low in protein, it has little impact on water quality.

Without exception, juvenile fish (fish under three months of age) do best when given several small meals throughout the day. In the case of very young fish (under 1 month of age), as many as six meals per day is recommended. Some of those meals can be algae that you have thoughtfully allowed to grow in the aquarium.

For periods of up to seven days, you can easily leave a mature aquarium unfed. For longer periods, you have several options. Big fish, particularly predators, can easily go two weeks or more without food if they are healthy. Herbivores like goldfish can be given a bunch of cheap aquarium plants, such as pondweed, and left to their own devices. Community aquariums can usually be catered for using automated feeders. Reducing the rations is a good idea, of course, because you won’t be around to remove waste or perform water changes.

Asking friends to feed your fish isn’t recommended. If you must do this, divide the food into portions before you go, and hide the rest. Leave only enough for one meal every three to four days.