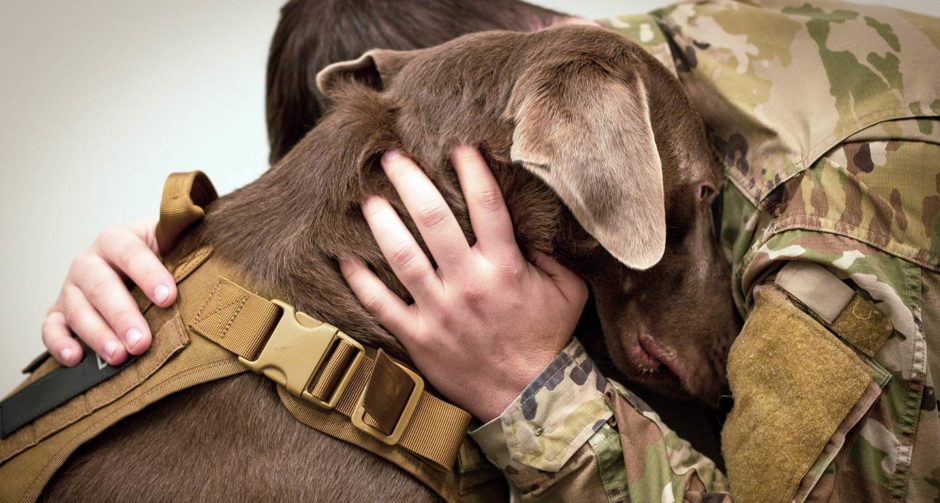 They are the unsung heroes of war. Whether called war dogs or military working dogs, canines have become an indispensable part of modern warfare. Praised for their detection capabilities, these dogs have saved untold number of lives in the Middle East and Afghanistan sniffing out bombs and weapons caches.

When not on the job during deployment, military working dogs also provide relief and happiness to the troops with whom they work. “When I was with my dog, I could tell her the same stories over and over and she'd act like it was the first time she heard it,” Technical Sergeant Patrick Meade says about Liska, the dog he deployed with to combat. There also were times Liska provided levity that made war a bit more bearable. Meade recalls one time in particular: He and Liska were on a helicopter with about 60 troops, and Liska was happily running back and forth receiving pats from the servicemen. In fact, she was so happy that she didn't want to leave when Meade disembarked. “She wouldn't come,” Meade says with a laugh. “It was like she was saying 'there are 60 people to pet me.’”

Curious about these courageous canines? Here’s what you need to know.

What Are Military Dogs?

For about as long as mankind has engaged in war, our trusty companions have been at our sides when we “let slip the dogs of war” (as Mark Antony says in William Shakespeare’s “Julius Caesar”). The earliest recorded use of dogs in war occurred in Lydia—an Iron Age kingdom in what is now modern western Turkey—in around 600 B.C., according to the American Kennel Club. But despite being around for centuries, military working dogs weren’t officially recognized by the United States until March 13, 1942, during World War II. Since then, more than 30,000 dogs have served in the U.S. military, with around 2,500 active military working dogs serving today, reports the U.S. Army.

Today, military dogs are tasked with jobs such as scouting and patrolling for snipers and ambushes, according the United States War Dogs Association, alerting their handlers of enemy forces through body language such as stiffening their body and pricking their ears. Another job for these heroic canines? Using their powerful sense of smell, explosive detection dogs sniff out the chemicals often used in explosives, warning troops of the presence of bombs hidden on a person, in a vehicle, or on the road.

In addition to war zones, dogs work with military police on patrols, guard facilities and prisons, for crowd control, to sniff out contraband and narcotics and aid in the protection of VIPs.

Need proof of these pups’ prowess? While deployed in Iraq, Technical Sergeant Martin A. Campos and his canine partner Ikka, went on 103 missions in just over four months, finding buried rockets and bombs and rocket launch sites with the Air Force's Quick Response Team. The dogs' natural instincts in the field arguably exceed those of any machine. And while technological advancement continues, Meade notes machines need a power source, support equipment and sometimes sophisticated set-up and tear-down. As for a dog? “Kibble and a leash,” Meade says. “And the leash is optional.”

When Naval chief Jason Silvis and his dog, Bagir, were deployed in Iraq, he estimates that about 85 percent of the missions to uncover arms were successful. So adept were dogs and trainers that they were on the enemy's “top five kill list, because we were finding all their stuff,” Silvis says.

Technical Sergeant Meade remembers a time when Liska was involved in a training exercise and the dog found a collection of rifles the trainers and handlers weren't even aware of.

For Campos, Ikka became his canine soul mate. Sadly, Ikka passed away in Iraq from a non-service related liver problem in 2009. The sergeant can't hold back the choke in his voice when he recalls the difficult decision to euthanize his partner and how he took the responsibility upon himself to push the plunger in her IV and deliver the lethal dose. To this day, Campos keeps a small memorial on his mantel with the dog's ashes, canine teeth, a collar and several pictures to remember “one of the greatest dogs I ever worked with.” 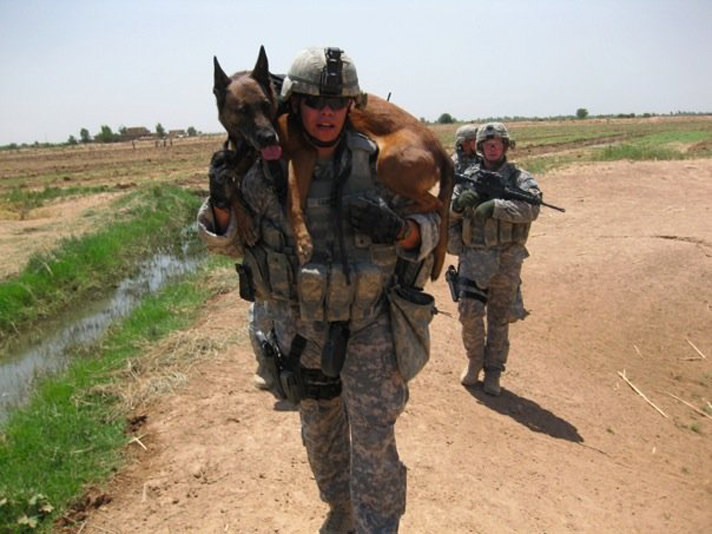 Martin A. Campos treks to base in Iraq with his canine partner.

Modern military dogs and trainers in all branches are trained at the Lackland Air Force Base in San Antonio, Texas. This is also where about 10 percent of pups are bred for the Department of Defense, with the rest provided from breeders both stateside and overseas who are aided by the AKC’s Patriotic Puppy Program, which provides breeders with the knowledge of how to raise these working dogs.

The 341st Training Squadron at Lackland oversees the training school where about 300 dogs a year (plus their handlers) are trained. Basic training for the field and combat tracking courses are for dogs, while there are separate courses for handlers and kennel masters. The most intensive training is reserved for dogs and soldiers who are paired up for the specialized search dog program, which trains the teams for war and danger zones. Dogs in that program are trained for two months on bomb and weapon detection and another 60 days on aggression.

Before the September 11 terrorist attacks, about 200 dogs were trained annually. That number increased to more than 500 in the next few years, with thousands being deployed to battle fields. Most dogs are raised by foster families until they are 1 or 2 years old before going into training. According to Silvis, the chief operations superintendent at the 341st, the military purchases mostly Belgian Malinois and German Shepherds from breeders in Germany with impressive bloodlines. The average value of the dogs, he says is about $4,500.

When War Is Over

When they retire from the military, many of these dogs go on to become service dogs, comforting wounded vets, or they become pets to adoptive families and their handlers. A limited number of dogs who either complete their service or do not complete training school are available to the general public at no charge. Some are adopted by police departments, prisons and other organizations.

Some people who adopt these dogs see it as a way to give back to the military in a way, Silvis says. And there certainly are other rewarding aspects. In addition to a smart, well-trained dog, adopters also receive, “a full-breed, high-quality dog with good bloodlines,” Silvis says.

To Meade, there is no better dog than a military dog. Although about 90 percent of combat dogs are adopted by their handlers, he feels there is a great benefit to adopting a dog who has been deployed.

“You're adopting a hero,” he says. “There's something special about a dog that has worked its entire life in service of the country.”

Interested in adopting a military work dog? Information and links to military dog adoption opportunities are available at the Save-a-Vet website.

Greg Mellen is a freelance writer with more than 30 years experience in newspapers and magazines. Over the years, he won more than 30 writing awards at the national, state and regional levels. He lives in Long Beach, California, where his 14-year-old cat, Cleo, patiently plots his demise. He keeps the cat in check by threatening her with a puppy as a brother.