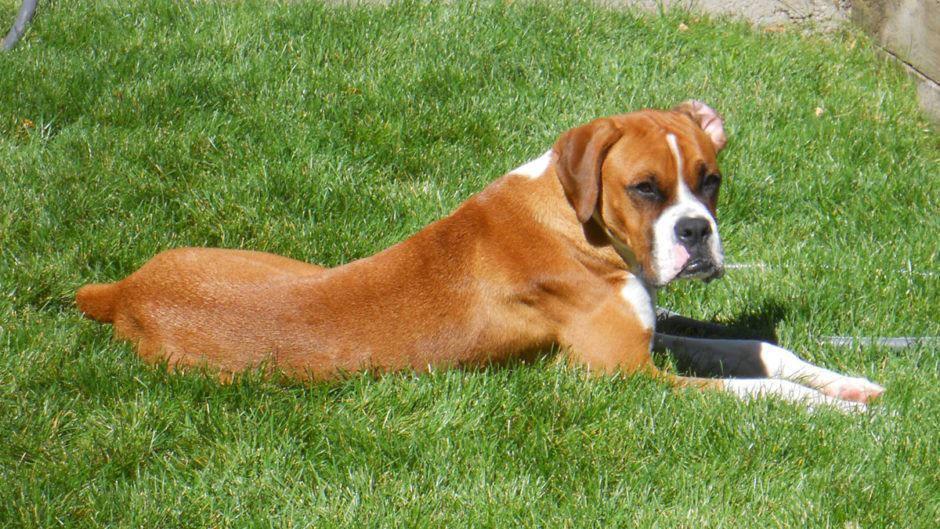 As a veterinarian, I’ve seen a lot when it comes to pets and catastrophic health issues. When I laid my eyes on Apollo, however, what I saw most was hope.

Apollo was a very sick puppy who was minutes away from being euthanized due to uncontrollable symptoms and no proper diagnosis. When his parents agreed to let me take him home with me, I was optimistic that we’d figure out what was going on and be able to manage his symptoms. Thankfully, we did.

How I Met Apollo

I met Apollo when he was 9 months old. I was part of a veterinary practice that specialized in end-of-life care, and his parents had made an appointment for euthanasia.

Before you think badly of them, understand that they spent seven months trying to figure out what was wrong with Apollo. He went to a veterinarian several times, and they ruled out many diseases, but they couldn’t determine the cause of his severe vomiting and diarrhea.

Apollo’s parents tried various dog food, but his symptoms continued to relapse. After not eating for a couple of days, Apollo would feel better and be very hungry. So he’d eat, start vomiting and get diarrhea again, stop eating, and the cycle continued. Eventually, the family ran out of money and decided that his suffering was simply too great.

I’ll never forget the first time I saw Apollo. I was standing in his front yard talking to his parents when this horribly skinny young Boxer slowly walked around the corner of his house. He wagged his whole back end when he saw me, and then he vomited.

I thought: “Oh my, I can’t possibly euthanize this sweet boy, but he can’t keep going on this way either.”

I asked his parents if they’d be willing to sign him over to me for continued diagnosis and treatment. They jumped at the chance to give him one more shot.

With IBD, a dog’s intestinal wall becomes inflamed, which gives irritating substances increased access to tissues. The access further increases inflammation and gut wall “leakiness,” and leads to ever-worsening symptoms unless the cycle can be broken.

Diet plays a huge role in managing inflammatory bowel disease in dogs, particularly when food allergies also are present, which is true in Apollo’s case. The goal is to find a diet that doesn’t contain the dog’s allergic triggers, which vary from pet to pet and almost always are dietary proteins.

I can’t remember how many diet trials I had run on Apollo. In the end, however, the only food he can eat is Purina Pro Plan Veterinary Diets HA Hydrolyzed Formula dry dog food. Every single other food I offered eventually caused his symptoms to relapse.

Apollo has been eating the same prescription dog food formula for over eight years. As long as he doesn’t eat something he’s not supposed to, like the crumbs that inevitably fall off my kids’ plates, he’s completely symptom-free.

He’s happy, healthy and weighs in at a muscular 82 pounds.

Apollo has filled out. Courtesy of Dr. Jennifer Coates

While I initially had planned to find Apollo a new home after he was healthy, my family simply couldn’t let him go. He’s been a joy—slobber and all—for the last eight years, and with the help of Purina veterinary diets, we hope to have him around for many more.

Dr. Jennifer Coates was valedictorian of her graduating class at the VA-MD Regional College of Veterinary Medicine and has practiced in Virginia, Wyoming, and Colorado in the years since. She is also the author of numerous articles, short stories, and books, including the Dictionary of Veterinary Terms, Vet-Speak Deciphered for the Non-Veterinarian. She lives in Fort Collins, Colorado with her husband, children, dog (Apollo), and cat (Minerva).