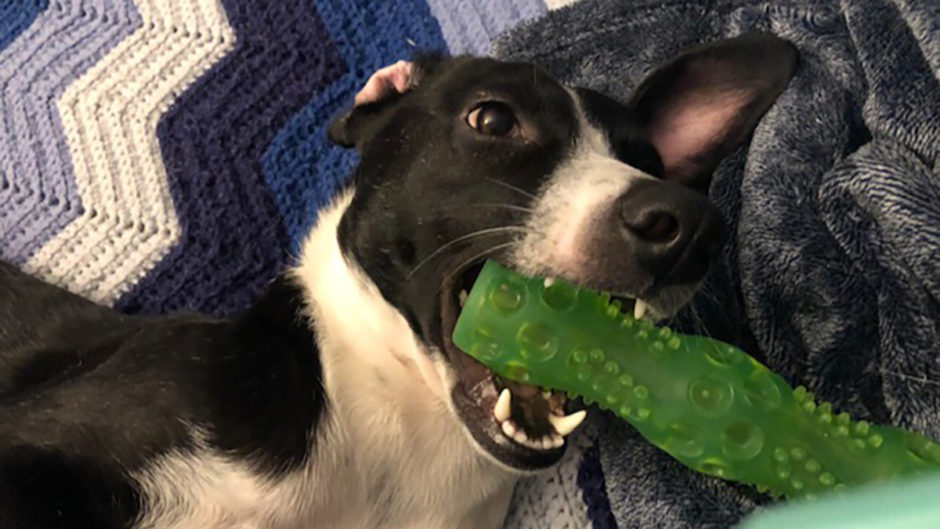 During a vacation, taking home a souvenir is common. But what about bringing home a dog?

A U.S. tourist ended up adopting a homeless dog she met while visiting Cartagena, Colombia. The street dog’s journey to her new home in New York City took about two months and almost didn’t even happen.

Despite a few bumps along the way, the plucky pooch has finally settled into her forever home and is enjoying all the creature comforts she deserves. And it’s all thanks to the woman who took a chance on her.

In the fall of 2017, New Yorker Michele Brancati and a friend were on four-day vacation in Cartagena when they spotted a pack of skinny dogs around Santo Domingo Square, a popular place for people to hang out and eat.

“It was incredibly hot in November—maybe [in the] high 80s or low 90s—so a lot of dogs found cool places to lay low until the sun went down,” Brancati says. “But once the sun was down, [the dogs] were back out walking around the streets [and] laying out in the squares. A lot of them seemed to gravitate to the squares because there were so many outdoor restaurants, [which meant] easy access to scraps.”

It was a difficult sight for Brancati to take in.

“As an animal lover, it was really very tough to see,” she says, “mainly because I knew there was no way I could help them all.”

One dog in particular, whom she called Dominga, easily stood out from the crowd.

“Dominga was particularly playful; she had this funny way of hopping all around the dogs almost in a teasing manner,” Brancati recalls. “Her innocence and playfulness really were what made me fall in love with her.”

Another thing that made Dominga stand out from the rest of her pack was how much she looked like Brancati’s other rescue dog, Cooper.

“They are both black and white, medium-sized body and height and their markings are near identical,” Brancati says.

To introduce herself, Brancati brought Dominga some food, which the hungry dog gladly ate. Things went so well that Dominga tried to go home with the newfound friend.

“On that same night, she tried to follow my friend and I back to our hotel,” Brancati says. “I even contemplated trying to sneak her in.”

It didn’t take long for Brancati to decide she wanted to figure out a way to bring Dominga home.

“Night two in my hotel room, I couldn’t stop thinking about all the homeless dogs, but [Dominga’s] little black-and-white face kept popping up in my mind, and I knew I had to do something,” she says.

Some Google searching brought her to Cartagena Paws, a small rescue in Cartagena, Colombia. It was founded by Maureen Cattieu, from Buffalo, New York, who is a first-grade teacher at an international school in Cartagena and works tirelessly as director of the rescue to help injured, abused and neglected animals.

“I emailed Maureen asking for help,” Brancati says. “After several exchanges, we agreed on a plan [that] I was going to get Dominga from her usual spot in the square and bring her to a local vet where she would be treated for any health issues [and would be] spayed and boarded until we could find a flight volunteer for her trip to New York City.”

Things didn’t turn out quite as expected, though.

Bumps in the Road

On her last day in Colombia, Brancati went to the square as planned, but Dominga was nowhere to be found. After searching for hours, she eventually had to give up and return to the hotel to grab her luggage and catch her flight home.

“I was absolutely devastated and couldn’t stop thinking about her the entire flight home,” Brancati says.

Once she landed, Brancati contacted Cattieu and explained how she couldn’t find Dominga.

“About two weeks later, Maureen calls me [on WhatsApp] and shows me Dominga sleeping under a small planter,” Brancati says. “Maureen successfully got Dominga into a cab and brought her to the vet, where she began the first of many steps towards her new life.”

Dominga was skin and bones, extremely dirty and had crust on her eyes—a problem that likely plagued many dogs in hot Cartagena.

“When she first went to the vet, they had to give her an IV with fluids because she was so severely dehydrated,” Brancati says. “She also had worms, mites and, of course, needed to be spayed. Thankfully, she was heartworm-free and had no other major illnesses.”

Dominga remained at the vet for almost two months to be treated for any health issues, and she was boarded there until they could find a flight volunteer, which is someone who is willing to be a passenger on the plane to save on pet travel costs. On Jan. 19, 2018, Dominga finally flew from Cartagena to her new home in New York City after a couple volunteered to fly with her and three other rescue dogs.

“To get these four dogs to their forever homes, Maureen started a GoFundMe campaign to raise $1,200,” Brancati says.

The money covered flight costs, international health certificates and vet bills for two of the dogs. Brancati covered the traveling costs for Dominga, and the couple paid for the fourth dog, which they adopted.

“Once the funds were raised, the couple from Boston flew to Cartagena, collected the dogs, got them cleared for travel and then flew them to JFK, where I met them and took Dominga home,” Brancati says.

Dominga has settled in nicely at home in New York City, though initially she was afraid of going for walks.

“It took several weeks before she felt comfortable enough to go on long walks,” Brancati says.

“It was amazing to see how Cooper helped bring her out of her shell,” Brancati says, “and how much [Dominga] adored him.”

Dominga’s life is completely different now. No longer a homeless dog, her days include of tons of belly rubs, plenty of dog food and lots of playtime with Cooper.

“I have never seen a dog play with toys the way Dominga does,” Brancati says. “She grabs her toy and shakes her head so fast that she loses her balance and falls over.

“I also think she appreciates love more than any other dog I’ve ever met,” she continues. “She sits there quietly, gazing up at you, so thankful for the attention and warmth.”

It’s safe to say Dominga is happy with her move to the Big Apple.