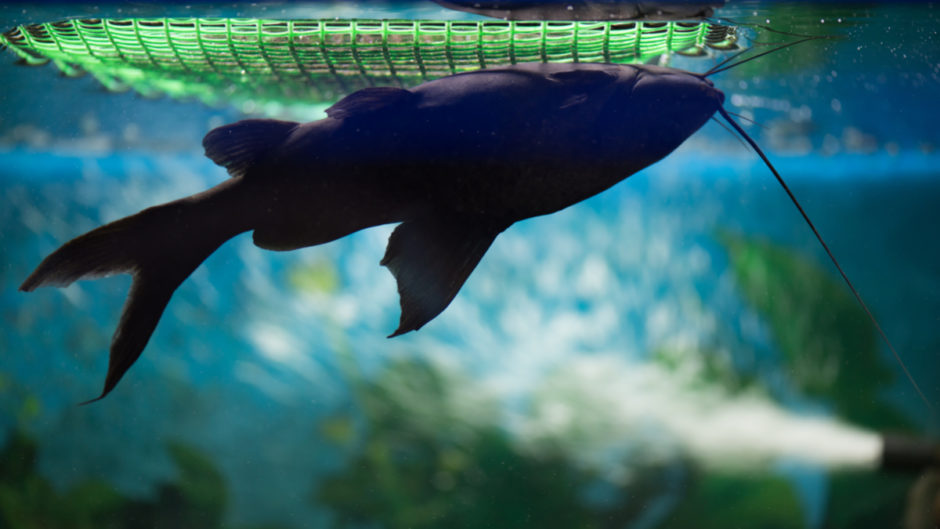 A fish swimming upside down normally indicates a serious ailment and a near-term appointment with the Great Aquatic Paradise. But one unusual fish, the upside-down catfish (Synodontis nigriventris), is quite adept at gracefully gliding upside down with the greatest of ease. Due to a remarkable physiology, the seemingly bizarre swimming habits of this fish are actually quite normal, rather than being an indicator of a life-threatening illness. These fish are able to perform underwater acrobatics, including knife edges, barrel rolls and their extended namesake posture. In a still fish aquarium, these fish are able to remain motionless in an upside-down position for what seems to be an indefinite period of time.

Synodontis nigriventris received its Greek and Latin binomial names from its tooth and jaw formation, and unusual dark belly coloration. The genus name Synodontis means “together teeth,” and the species name nigriventris means “dark abdomen.” Normally, the dorsal pigmentation of a fish is darker than the ventral side, and it is speculated that this is to provide visual obscuration from predators. But the ventral side of the upside-down catfish is dark, indicating this fish has chromatically adapted camouflage for extended upside-down swimming near the water’s surface.

The upside-down catfish is a peaceful, schooling fish that grows to about 4 inches in length and is ideally suited for a community tank with other species of a similar temperament. Of the six S. nigriventris in my collection, slight coloration differences (white or yellowish base color mixed with dark brown and black marbling) are observable under bright lighting. Random white dots create a stunning sparkling effect on this beautiful fish. Reference material and hobbyist reports indicate these fish are tolerant of a wide range of water conditions (pH 6.0 to 7.5) and temperatures ranging from 71 to 82 degrees Fahrenheit.

Synodontis nigriventris is of the order Siluriformes and part of the Mochokidae family. It shares the order Siluriformes with the popular Corydoras, having distinctive ray finnage, cat-whiskerlike barbels and a scaleless body. Synodontis nigriventris has been collected from Malebo Pool in the Congo River Basin and in many tributaries, such as the Lekenie River in the Odzala National Park in the Republic of the Congo. The Lekenie River is a clear to tea-colored waterway with a sand and fine quartz gravel substrate.

The reason for their propensity to swim upside-down is left to conjecture, but observing them for any length of time indicates an extreme determination to forage at the water surface. Most catfish are benthic dwellers that occasionally bolt to the surface for a quick gulp of air. But the pelagic upside-down catfish seems to rummage the top layer of the substrate only if food is unobtainable elsewhere.

Synodontis nigriventris normally swims upside down, methodically looking for food at the water’s surface, under large plant leaves, and around submerged wood and rocks. In addition to its unusual upside-down swimming, these fish are not affected by dorsal light response (DLS), which is a tendency of a fish to tilt its body toward the sun or bright artificial lighting. Fish DLS can easily be observed in the aquarium by shining a floodlight into the tank at about a 45-degree angle. It was interesting to note that my S. nigriventris are not in the least affected by DLS.

Researching this species, I discovered a fascinating scientific study: “Postural Control Mechanisms in the Upside-Down Catfish (Synodontis nigriventris)” by D.L. Meyer, C. Platt and H.J. Distel in the Journal of Comparative Physiology, 1976. The researchers conducted an extensive series of experiments, such as blindfolding the eyes and disabling the use of sensory barbels to eliminate or interrupt spatial awareness. The series of experiments revealed S. nigriventris are capable of resetting their central nervous system to counteract DLS and vestibular reflexes — so swimming upside-down or right-side-up is perfectly normal for this species.

Aquatic Habitat of the Upside-down Catfish

I put my S. nigriventris in a well-established, 29-gallon experimental tank. The aquarium is not used for display purposes but endures a regular rotation of plants (change of position within the tank) or total exchange of plants. The aquarium has three different substrate areas consisting of sand, fine gravel (2 millimeter) and a rather coarse plant-specific substrate. Slightly more than half a watt per gallon of lighting is provided by one fluorescent, 20-watt T8 bulb. Two hang-on-the-back filters provide gentle current, and a 250-watt heater maintains a temperature of 77 degrees.

Unverified reports indicate this species is sensitive to nitrates; so, 15-percent partial water changes are conducted twice weekly. The tank is planted with Java fern (Microsorum pteropus), Cryptocoryne wendtii, C. wendtii var. ‘Bronze,’ Amazon swords (such as Echinodorus bleheri), C. ciliata and Nesaea var. ‘Red.’ The S. nigriventris show a preference for the large-leaved C. ciliata and E. bleheri, where they sometimes peck at the undersides or seek shelter. It is common to find one of these cats hovering under a large leaf. The tank also contains a small group of American flagfish (Jordanella floridae), which peacefully coexist with the S. nigriventris.

Upside-down Catfish is the Invisible Fish

My upside-down catfish aquarium also contains three large pieces of wood. The wood is full of crevices, providing concealment for the fish. The uneven bottom of one log provides a cavelike effect that three or more fish can be occasionally observed huddling beneath. A day or so after introducing the fish, I realized their coloration makes them virtually invisible when resting or moving in or around the dark logs. All of the fish became much darker in coloration after two days of residing around the logs. They blend in so well that one can actually be completely exposed on the side of a log yet virtually unnoticeable. To compound the problem, S. nigriventris is primarily nocturnal and rarely exposes itself during the day, unless disturbed or fed.

Initially, I fed the S. nigriventris at night, but this proved difficult because it was challenging to verify that all of the catfish were eating. Additionally, I found myself with six really unique fish that were virtually impossible to see. To overcome this, I began feeding them at dawn and dusk when ambient lighting from adjacent house windows is minimal and artificial lighting is off. The ideal location for feeding them turned out to be the cavern under one of the large logs. These fish are omnivores, so providing a wide variety of fish food is important. Using a pair of long-handled tongs, frozen foods (e.g., bloodworms, Mysis shrimp, mosquito larvae) are inserted about 2 inches into the cavern’s opening. The S. nigriventris are able to dine without much competition from tankmates and can be observed with a flashlight to ensure all are eating. I also provide food for the J. floridae at the other end of the tank as a diversion from the food intended for the catfish.

The old adage that hindsight is 20/20 certainly applies to keeping S. nigriventris. Ideally, these fish would reside in a planted tank with one hiding area, such as a flowerpot that can be easily viewed from outside the aquarium. Rather than removing the logs and completely disrupting the tank, I decided to try a clay flowerpot on its side as enticement for some of the S. nigriventris to relocate. Thinking if the flowerpot was nestled between two large-leaved plants that the fish would eagerly seek refuge in this new cave proved disappointing. The flowerpot just can’t compete with natural wood.

Another modification involved eliminating or covering the rough, larger plant-specific substrate area to preclude harming the barbels of S. nigriventris. In nature, these fish probably spend a good amount of time eating bugs (e.g., mosquito larvae) from the surface. Yet in the aquarium, the food they eat tends to be on the bottom, which emphasizes the need for a fine substrate (e.g., sand) that will not harm their barbels.

Catfish are prone to barbel cuts and abrasions that are no doubt painful and a potential source of disease. This fish’s eating habits are akin to casual grazing; to fully enjoy watching them eat at the surface, keep them in a species tank to avoid competition from other aquarium species. Live mosquito larvae makes an excellent surface food for S. nigriventris. This food is particularly appealing because in nature, they reportedly leisurely skim mosquitoes at the surface. Probably their dark, camouflaged belly hides them from predators while swimming upside-down in search of food.

The estimated life span and age of sexual maturity for upside-down catfish is unverifiable. Life span estimates range between five and 15 years. My S. nigriventris are juveniles measuring about 1 to 1.5 inches in length and are probably sexually immature. Some anecdotal accounts report breeding in home aquaria, but most accounts seem to indicate accidental spawnings rather than a deliberate process that can be reasonably replicated by other hobbyists.

I asked my pet shop about the origin of my fish and was informed they were bred at a professional fish farm in Florida. I contacted the fish farm’s owner and learned that his establishment is the only known commercial breeder of this fish in the United States and that many S. nigriventris continue to be collected in the wild.

Over a period of years, he meticulously developed the technique using hormone injections followed by egg and sperm stripping (a gentle squeeze, just as is done with salmon) and hatching the eggs indoors. Hormone injections are required because in nature, something triggers them to breed, and this stimulus seems to be absent in captivity.

His fish routinely produce an astounding 1,000 to 2,000 eggs per spawn. Of course, not all eggs are fertile, but his numbers per spawn are significantly higher than the anecdotal number of 300 to 500 eggs. Hopefully, as time progresses, someone will figure out the missing stimulus, and propagation of these fish will become possible for hobbyists. In the meantime, for those lucky enough to experience a spawning, carefully document and share the circumstances with fellow aquarists.

Upside-down catfish are a wonderful addition to any aquarium containing peaceful fish. Their unusual swimming habits coupled with beautiful coloration and ease of care make them a perfect fish for any aquarium that attends to their specific needs.