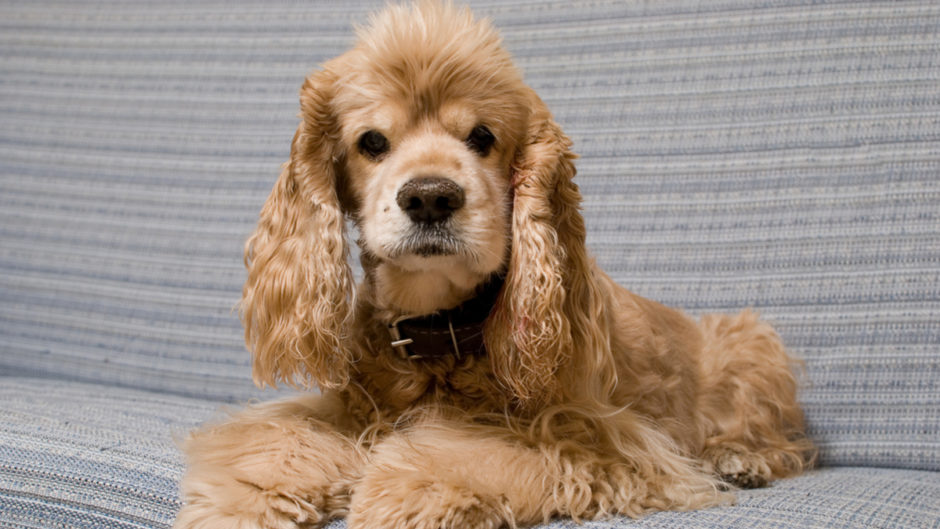 Glaucoma in dogs can lead to permanent blindness—sometimes in both eyes. Yet, if pet parents know some of the signs of glaucoma in dogs, they might help their beloved pooch avoid this fate.

If you live with one of the dog breeds most likely to develop the debilitating, and often painful, eye disease, you’ll want to remain vigilant about certain signs of glaucoma, such as cloudy eyes in dogs.

What Is Glaucoma in Dogs?

There are two main types of canine glaucoma, says Dr. Brad Holmberg, DVM, MS, Ph.D., DACVO, a veterinary ophthalmologist at Animal Eye Center of New Jersey, which has four locations. Both are characterized by an “elevated pressure inside the eye that is high enough to do damage to the retina and optic nerve.”

Secondary glaucoma occurs when something obstructs the interocular drain within the eye. It’s characterized by inflammation inside the eye and can result from bleeding in the eye—maybe from a blunt-force trauma (your dog ran into something)—retinol detachment, an intraocular tumor, lens fluctuations or some other reason the drain swelled or closed, Dr. Holmberg says.

Vets will try to determine whether a dog has primary or secondary glaucoma to determine treatment and if the other eye will be impacted.

“If it is truly primary or genetic glaucoma, the fellow eye will definitely be affected somewhere down the road,” Dr. Holmberg says. “If it’s secondary glaucoma, depending on the cause of that underlying inflammation, it might just be that one eye.”

Your vet can start early treatment of the second eye in primary glaucoma and likely delay the onset of the disease in that fellow eye by months or even years, he says.

Which Dogs Are Likely to Develop Glaucoma?

Again, primary glaucoma typically is seen in the following breeds:

“Any dog can get glaucoma, but if we see a Cocker Spaniel with a red eye, we’re going to be thinking, ‘Oh, this is probably glaucoma,’” Dr. Holmberg says. The same goes for the other breeds listed above.

Female dogs also are more likely to develop glaucoma than males, about 2:1, he says, and the onset of the disease is more typical in older dogs, depending on the breed. A breed more predisposed to the eye disease, like Shiba Inu, might develop canine glaucoma as early as age 5, while another dog might not suffer from it until she’s 10 or 11 years old.

What Are the Signs of Glaucoma in Dogs?

Immediately identifying canine glaucoma, or even the possibility of it, is critical to saving a dog’s eyes, Dr. Holmberg says, and he means by hours, not days or weeks. If pet parents watch for a few basic symptoms, it can mean the difference between their dog becoming permanently blind or not.

That’s because, unlike in humans, glaucoma in dogs is “a very sudden, rapid onset” disease, Dr. Holmberg says. “It can be less than a day when you end with a dog with permanent eye damage.”

Here are the top signs of glaucoma in dogs:

Less common signs of glaucoma in dogs, which might not be present:

Dr. Holmberg says pet parents need to look for cloudy eyes in dogs or the red, inflamed eye, and immediately take their dog to the vet for diagnosis.

How Is Canine Glaucoma Diagnosed?

The vet will take a dog’s eye pressure to determine if it is in the normal range or elevated. Dr. Holmberg says most general practitioners can take this measurement, not just a veterinary ophthalmologist.

“If they or their vet has a concern about glaucoma, it should be treated as an emergency and not something that can wait a week or a month, because at that point the treatment options are going to be very limited, especially for vision,” he says.

Can Glaucoma in Dogs Be Treated?

“There’s no cure for glaucoma, but it can be managed,” Dr. Holmberg says.

One of the first steps toward dog eye care, especially to save the pet from going blind, is to immediately bring the pressure down through a combination of drug therapies.

“If it’s primary glaucoma, we’ll try to decrease the amount of fluid being produced in the eye, and then we also try to open the drain medically,” Dr. Holmberg says.

A vet likely will prescribe prostaglandins drugs, such as Latanoprost; beta blockers, such as Timolol; and carbonic and anhydrase inhibitors, such as Dorzolamide and Brinzolamide.

Dogs with secondary glaucoma typically receive carbonic and anhydrase inhibitors and beta blockers, or perhaps a combo drug like Cosopt, depending on the underlying cause, Dr. Holmberg says.

Glaucoma medications are usually a long-term treatment, he says, and they’re given anywhere from one to three times a day, depending on the severity of the glaucoma, the dog and the underlying cause. Talk to your vet about specific prescription eye care for dogs.

Surgery Options for Glaucoma in Dogs

If the dog hasn’t already lost his vision, the vet might suggest a surgery—cyclophotocoagulation with an anterior chamber shunt—to drain the eye and delay further damage. You’ll need to continue a drop treatment for the underlying glaucoma, but Dr. Holmberg says this procedure is “relatively highly successful.”

For dogs with glaucoma who already lost their vision, there are three surgeries that can reduce the pet’s pain and often prevent further eye disease, they are:

Can Glaucoma in Dogs Be Prevented?

“There’s no definitive way to say, this dog will never [get] glaucoma,” Dr. Holmberg says, but there are several tests where an ophthalmologist can look more closely at the dog’s eye, especially those breeds more likely to develop glaucoma, to see if she is at risk, but the tests aren’t 100 percent. These include a gonioscopy and an ocular ultrasound or ultrasound biomicroscopy.

What’s Next After Diagnosis?

Following a vet-recommended treatment therapy can make your glaucoma-positive dog more comfortable, but there is no cure.

“Glaucoma is a very difficult disease to manage and it’s not a curable disease, but if diagnosed early and treated appropriately, then the likelihood of maintenance of vision is reasonable,” Dr. Holmberg says. “But eventually glaucoma usually wins. It’s our job to battle it and maintain comfort and vision as long as possible.”