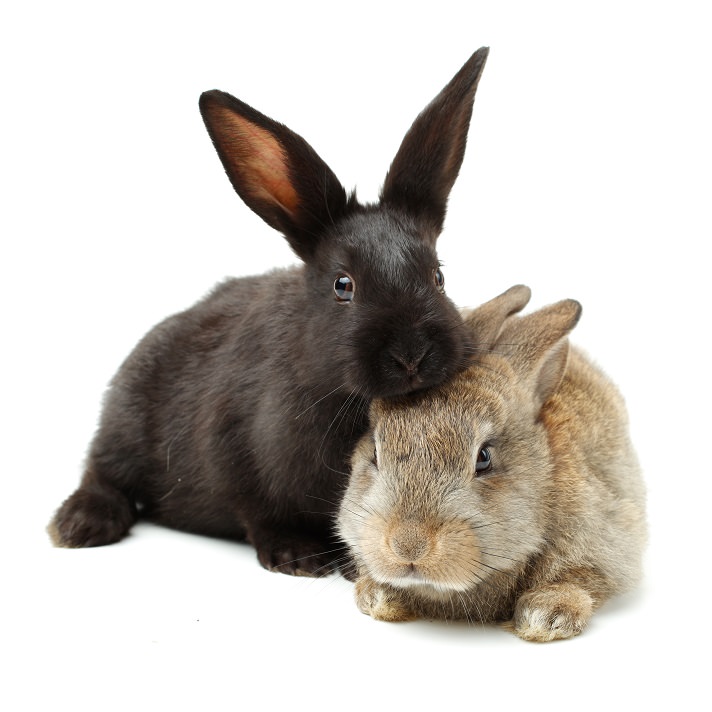 Whether a rabbit is dominant or subordinate could vary depending on the other animals it interacts with. chengyuzheng/istock/Thinkstock

People often use the word dominance to explain aggressive behavior. For example, they might describe a dog or rabbit as a dominant individual, which suggests that dominance is an integral part of the pet’s personality. This misunderstanding can increase a rabbit’s aggression if a pet parent believes he must show his pet who is the boss.

The truth is, dominance is not a personality trait. Rabbits, people and dogs are not born dominant, though they might possess characteristics that enable them to acquire a high ranking or dominant status in their social group.

Dominance actually is a description of the relationship between two creatures. The one with higher ranking is the dominant animal, and one with lower ranking is the subordinate. Another way to describe it is benevolent leadership.

Why Do Rabbits Show Dominance?

Rabbits and other animals are not born with status. They acquire it when others in the group recognize that animal’s greater qualities and give way to him.

A rabbit who is able to obtain and maintain resources—the comfy burrow or a particular piece of food—might be given the place of dominance. In the natural order, some rabbits obtain dominant status and the others take subordinate status; they live in a clear hierarchy that is maintained amicably.

Since dominance status is given by others, relationships can change depending on a rabbit’s physical and mental health, and his environment. Dominance is not necessarily a permanent position.

Being the dominant animal in any relationship has benefits. Dominance status grants priority access to the good things in life, namely resources, such as food, a mate and the best places to live.

How Do Rabbits Show Dominance?

You can recognize the dominant rabbit in your home by observing your pets’ interactions. For example, when two rabbits meet, the subordinate greets the dominant by stretching out his head and lowering his ears to the other rabbit. It’s like when we say good morning to our boss at work.

The whole point of dominant and subordinate relationships (known as hierarchy) is to reduce aggression within the group. When this hierarchy starts to go wrong is when you see aggression.

In the wild, you see youngsters growing up together. When aggression occurs, they work it out and then one leaves. In captivity there is no place for the submissive rabbits to leave, so the tension and aggression can get worse. Our pet rabbits often live with who we chose, not who they chose, and they cannot leave.

When we see aggression toward people or other rabbits, it’s usually because there’s no way for them to get away from each other, there are too few resources,

What to Do About Dominance in Rabbits

When we see aggression toward people or other rabbits, it’s usually because there’s no way for them to get away from each other or there is a lack of space and/or resources, They might be fighting for reasons other than dominance, but if you notice aggressive behavior between your rabbits, the first step is to take a look at their environment.

Keeping in mind that rabbits naturally are prey animals, does their environment offer plenty of privacy and dark hiding places? How much space do they have?

Rabbit cages in as large a run as possible, to which they have free access, are ideal setups. You can create a runaround system of your own by connecting spacious tubes to a cage, leading to a hutch, leading to another cage, or with several boxes. This gives your pet rabbits space to sit, sleep and run around, the choice of moving around, and options for when they want to be together or spend time apart. Such a system can provide a lot of space to rabbits without encroaching too much on yours.

As far as bunny supplies go, include at least two food bowls that are separated by several rabbit body lengths, two hay racks apart from each other, two places your rabbits can rest together or on their own, and lots of toys. The general rule is to provide at least one of each item per rabbit and one spare. By spreading these apart, it is less likely a single rabbit will start hogging everything.

It is rare that dominance is shown to humans. Most aggression toward people is when a rabbit feels scared. He may have associated hands with being picked up. This is scary for most rabbits and can be painful for many, especially if they are kept in small cages and have limited exercise to build up muscle and bone strength.

Another reason rabbits can be afraid of human hands is if your pet rabbit has learned that the hands take away his food bowl. This is common when there is only one food bowl and the rabbit is fed mostly concentrate food. Remember, 80 percent of a pet rabbit’s diet should be hay and greens. A daily portion of hay that is the same size as you’re your rabbit is a rough guide.

The other common reason why rabbits get aggressive toward humans is simply that they are bored and frustrated. Like all animals we keep, they need things to do. Boredom busters can be puzzle feeders, toys, cardboard boxes to rip up, etc.

If you are providing plenty of resources and space for your rabbits, it’s time to look at boundaries of behavior. Being clear and predictable in how we communicate is fundamental to building good relationships with dogs, cats, horses, rabbits, birds and any other animal, including with other people! I call this the Learn to Earn or Good Manners program of communication. It makes you—the human—less scary and more predictable.

For example, if you sometimes let your bunny on the sofa and sometimes do not, but you give no clear signal for him to know when it’s OK to be there or not, then this can cause anxiety as well as aggression when you try to get your pet off the sofa. In contrast, the Learn to Earn allows you to become the benevolent decision maker, the benevolent leader, and your predictable behavior enables your pets to relax around you.

For Learn to Earn, your pet rabbit must willingly comply with a previously trained command or cue before he receives the resource or privilege. After all, you are “top rabbit,” and decision maker. If you are consistent, he will understand quickly, be more relaxed and feel less defensive over resources.

Because rabbits are very smart, they can learn tricks and cues easily, which can be put on cue. Clicker training is an excellent method to use. Once he understands some cues, these can be used in your Learn to Earn program. This enables him to “earn” sofa privileges, food, toys and attention from you; it’s your pet rabbit’s way to say “please.”

Dominance is a natural part of rabbit social life. Once we understand how to recognize truly aggressive behavior and what causes it, we can make necessary adjustments to help return to a calm and happy life and relationship with our precious pets.

Anne McBride BSc., Ph.D., Cert.Cons., FRSA, has been a practicing pet behaviorist since 1986 and a member of the Association of Pet Behaviour Counsellors (UK) since 1990. Her book, “Why Does My Rabbit…?” by Souvenir Press can be a useful source of information about problem behavior in rabbits and means to resolve it.