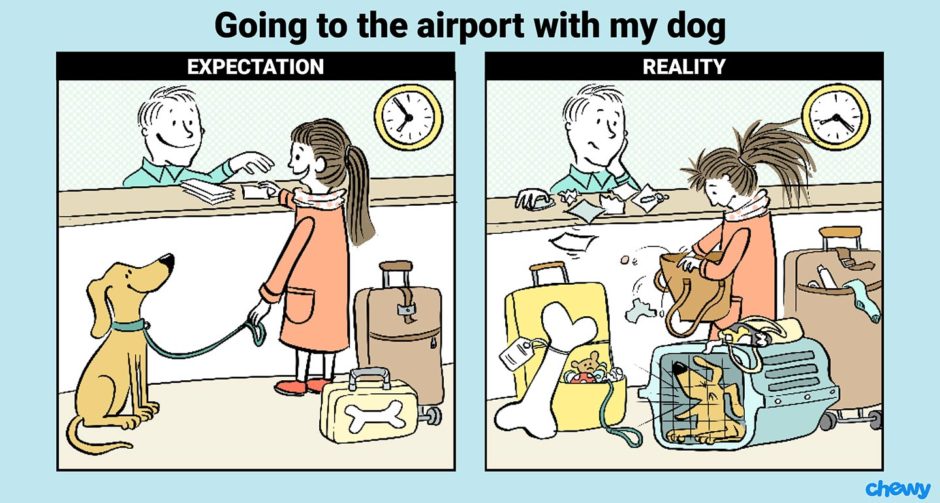 Let’s face it—many of our dream travel scenarios do not always unfold as expected. When traveling with your dog—there’s no better way to travel, is there?—it is best to be prepared, whether you’re hitting the road or the skies with a pup in tow. Below are several common travel scenarios, how we think they will turn out (the expectation), and how they actually turn out (the reality). The good news is, there are steps you can take to make your travel expectations a reality and ensure a stress-free trip! 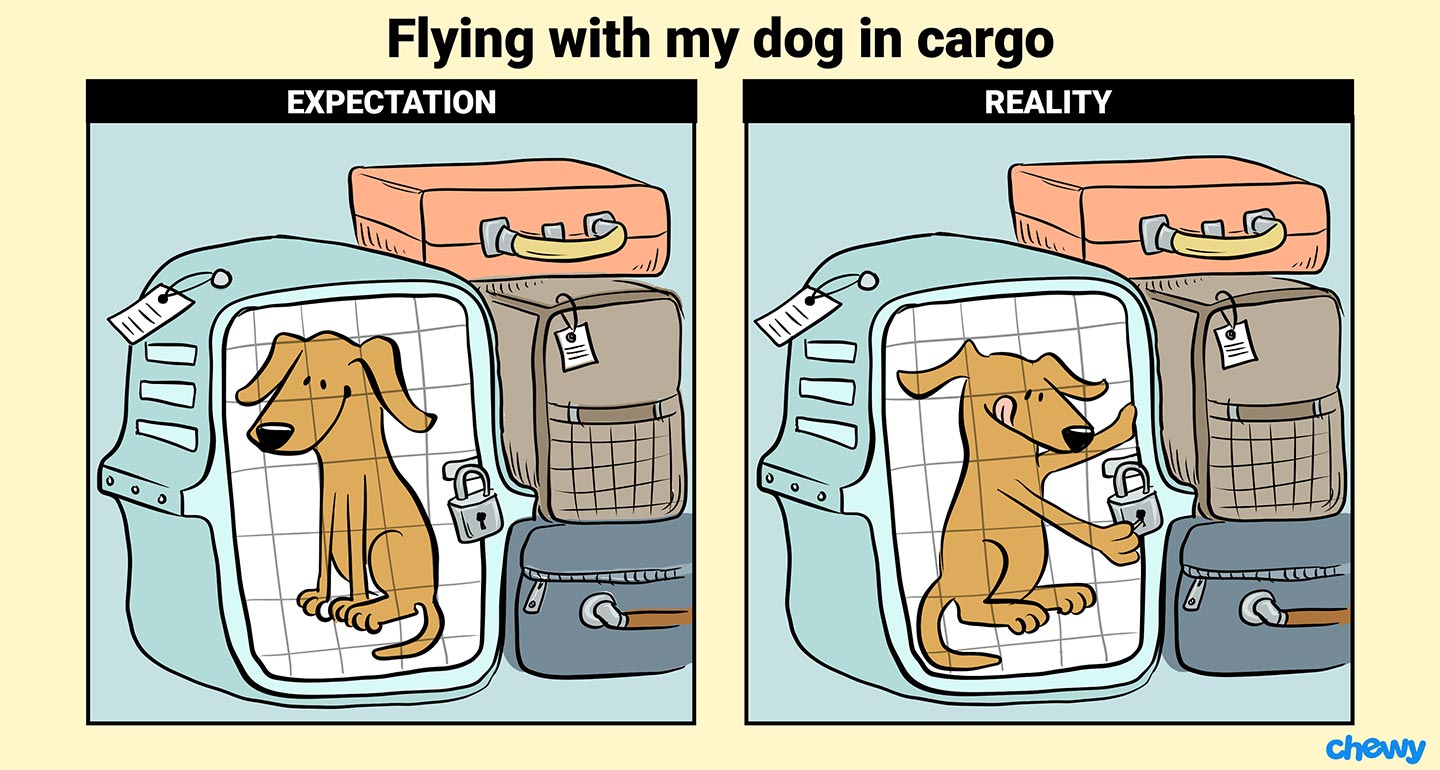 Flying With My Dog in Cargo

When traveling, people don’t often think that their dog can break free from their carrier or crate. Shelly Leibowitz, co-founder and training director of Green Leaf Pet Resorts in Millstone Township and Oakhurst, New Jersey, says ensuring your dog’s crate is secure is vital. Leibowitz, who often imports service dogs from Europe for local police departments, says it’s possible for a dog to become loose at the airport or within the plane cargo area, which is extremely dangerous. Since traveling in the plane cargo area can be very anxiety-provoking for a dog, they may attempt an escape. To prevent your canine from pulling a Houdini-like disappearing act, Leibowitz advises that all crates be tightly secured with zip ties and metal hardware.

“Many times when [you’re] handling the crate and you’re dealing with bolts and screws, they could become loose. With the ties … you’re that much safer,” Leibowitz explains.

Dogs traveling in cargo cannot ride in a typical wire crate; they must be contained in an airline-approved fiberglass or heavy-duty plastic enclosure with a wire door. The crate must be IATA-compliant to meet airline requirements and ensure your dog’s safety. Crate specifications vary from airline to airline, so check with your airline to make sure your dog’s crate measures up. 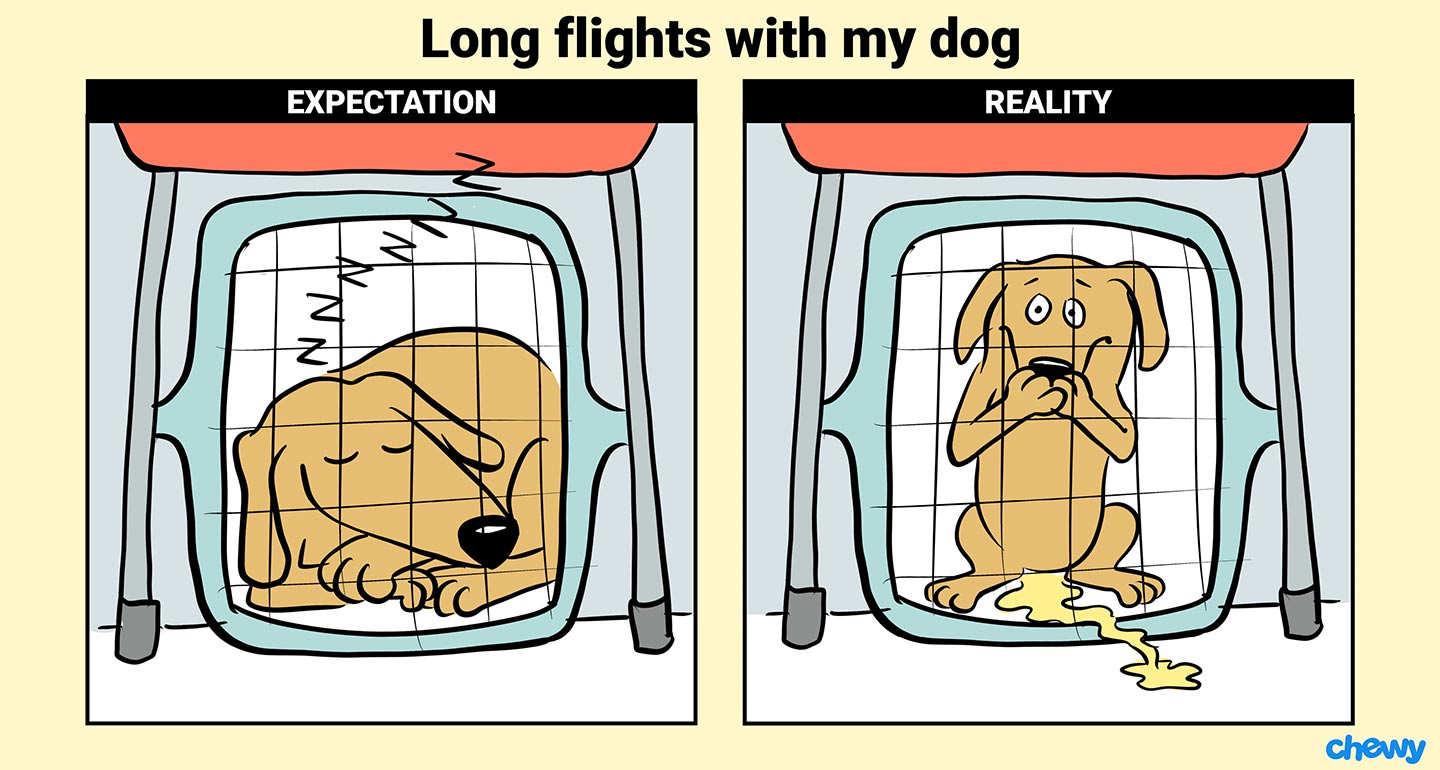 Long Flights With My Dog

When preparing for a long flight with your dog, whether in cargo or within the body of the plane, it’s important that your dog is comfortable. Long flights and unpredictable delays are stressful for adults, but they can be physically uncomfortable for a dog who is forced to hold in their waste for many hours at a time.

Additionally, Leibowitz recommends dogs fast before a long flight. Dogs who do not eat or drink the morning before a long flight will be much happier in the long run, he says, because they will not feel stressed and uncomfortable about holding their urine and waste for many hours.

“We find that fasting a dog before any flight makes the dog a lot more comfortable,” Leibowitz says.

It is also smart to pack a bowl and water so you can hydrate your dog as soon as you see him again, Leibowitz says. For dogs in cargo, airlines require a bowl inside the crate and fastened to the wire door so airline personnel can provide water when needed. 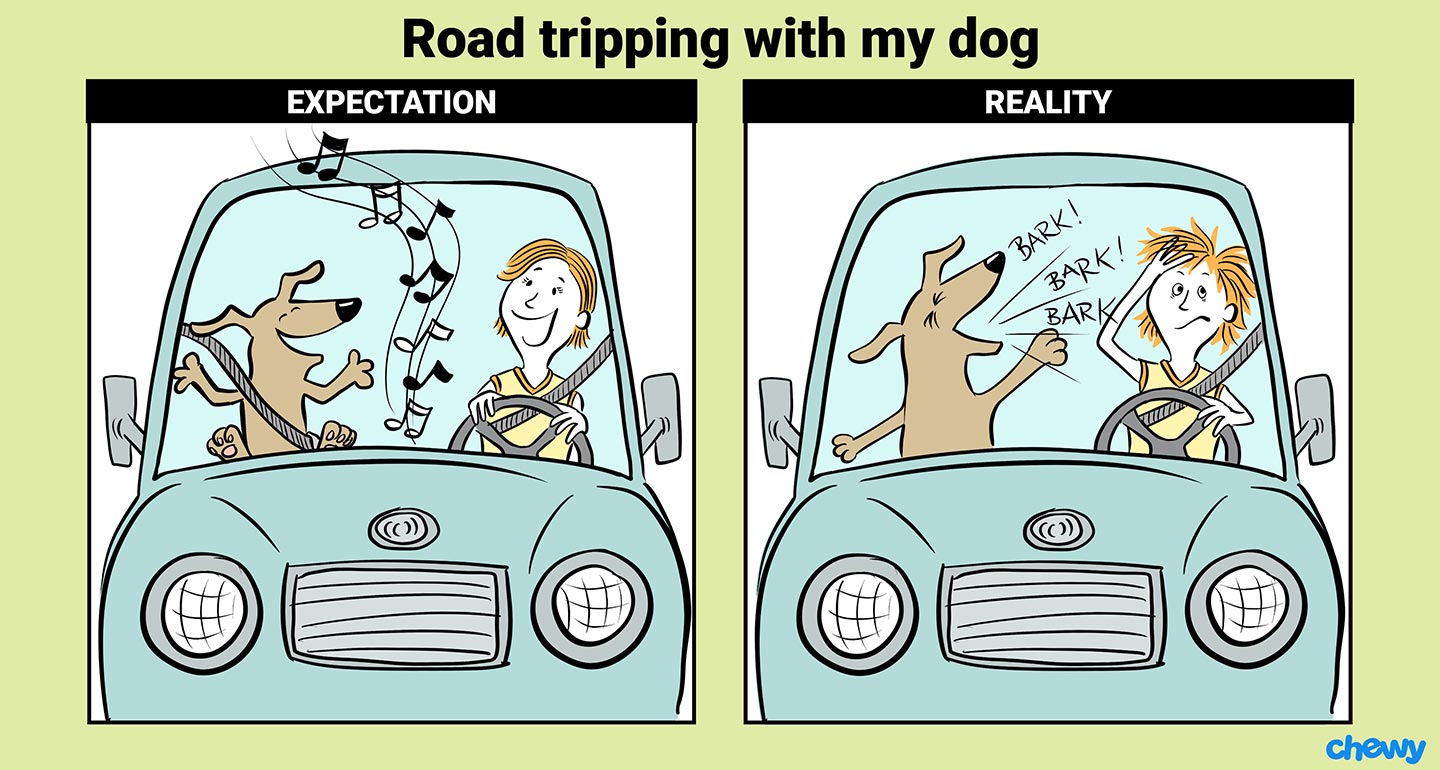 Road Tripping With My Dog

While many dogs love taking a ride in the car, others find the entire experience stressful. Even if your dog does enjoy a quick car ride, they might become anxious when stuck in the car for hours at a time. It is both unsafe and illegal in many states to keep your dog loose in your car, according to Leibowitz. Your dog should be kept in a crate or securely fastened in the backseat with a safety harness/restraint during any car ride.

“You find a lot of people who keep the dog in the front seat if it’s a small dog or loose in the back seat if it’s a large dog. This is incredibly dangerous because if you stop short, the dog goes flying forward,” Leibowitz says.

Being in a crate or harnessed up for long hours in a car can produce anxiety, even for dogs who typically don’t become anxious on the road. One of the most common ways canines communicate their anxiety is through incessant barking. If your dog may be prone to yap on your road trip, Leibowitz offers some precautions you can take to keep them calm.

If your dog is riding in a crate or carrier, he says, place very comfortable bedding inside it, and make sure the carrier is large enough for them to lie down comfortably.

Pet parents should also keep a ThunderShirt on hand to help alleviate their dog’s anxiety, Leibowitz says. The slight pressure and warmth provided by the shirt often calms the dog, which will help eliminate their barking—a symptom of their fear.

Get more tips for surviving a road trip with your dog. 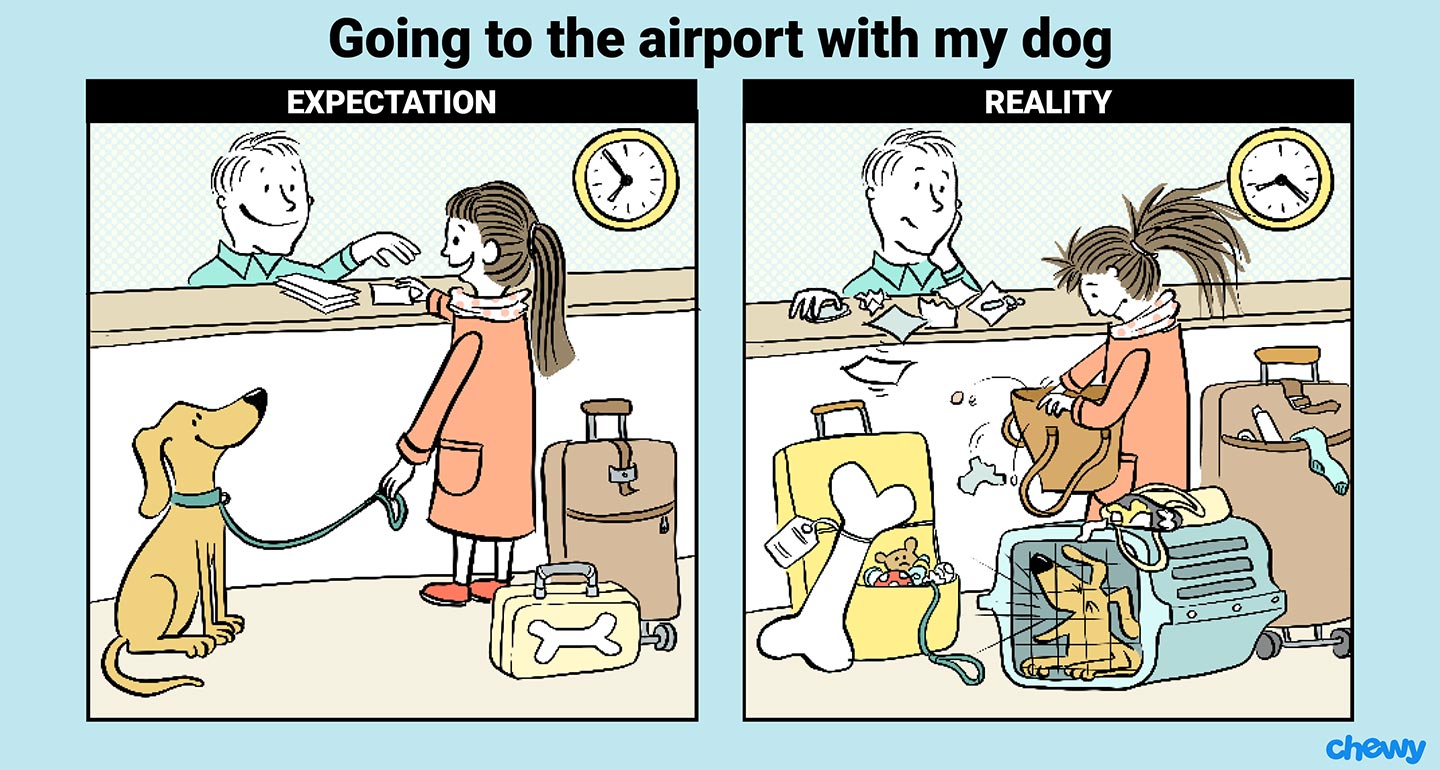 Going to the Airport With My Dog

While many dog parents expect travel with their dog to be as simple as when they travel alone, the reality is that a lot of preparation goes into flying with your dog. Pet parents are often required to present vaccination papers to the airline prior to boarding the plane, and each airline has different requirements, so it is important to do your due diligence when researching airlines for travel, according to Leibowitz.

To be fully prepared, Leibowitz suggests making sure you have a health certificate from the vet, showing that all your dog’s shots are up to date, including a rabies shot. Of course, if your dog is behind on vaccinations, make sure to get them up to speed before you travel—and don’t forget to ask for proof from your vet before you leave their office.

Leibowitz also suggests pet parents tell the pilot, or ask a flight attendant to inform the pilot, that a pet is on board or in the cargo area. When the pilot is aware of an animal in cargo or in the body of the plane, he says they can ensure that the plane temperature is appropriate to keep the animal safe. If you are fully aware of the paperwork you need to bring, what you need to pack, and the protocol regarding informing the airlines, flying with your dog will be a breeze! 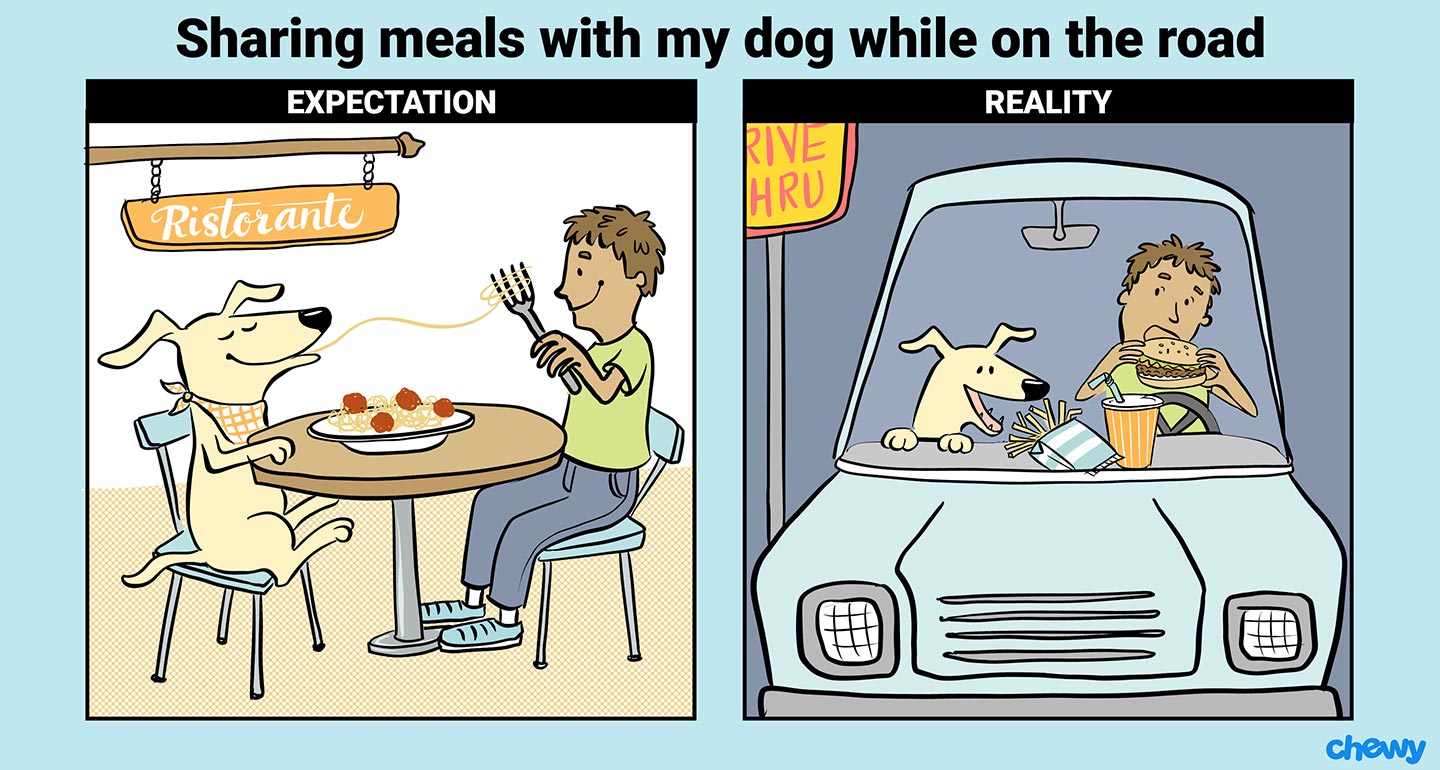 Sharing Meals With My Dog While on the Road

Most restaurants do not allow pets inside to dine. So, if you are hoping to share all of your meals with your canine companion, do a little research ahead of time—otherwise you will be eating all of your meals in your car!

Though it’s not the norm, there are many pet-friendly restaurants that allow dogs to sit and eat with you on an outside patio while you are traveling. Websites like Bringfido.com can let you know what restaurants near you allow pets.

It is also smart to pack food during a road trip, both for you and your dog. Since experts recommend that you stop every two hours during lengthy road trips to allow dogs to relieve themselves, why not pack a few sandwiches for yourself and some dog food for your pup and share a meal at an outdoor picnic table at a rest area? Many roadside rest stops have outside picnic tables where you can sit and share a meal with your buddy.

9 Secrets for Traveling With a Dog on a Plane

Dog-Friendly Vacations Across the US