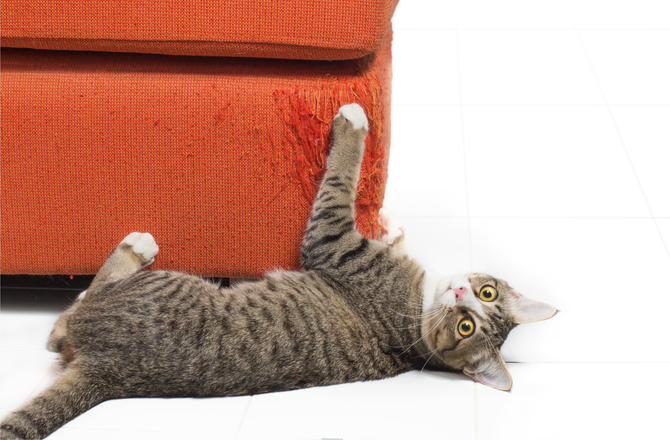 If you love your cat, your living room may have the cat-scratch scars to prove it, but it doesn’t have to be that way. If you don’t want your furniture to resemble something you might find sitting out on the curb waiting for the garbage truck, here’s your game plan:

“Placement is key – the closer you put the post to your furniture, the more likely your cat is to use it instead of your couch,” says Tonya Wilhelm, a natural and holistic dog training expert and cat behavior counselor.

While buying several cat scratching posts to strategically place in rooms may get expensive, it’s bound to be cheaper than replacing your furniture or repairing scratched-up walls. Wilhelm also recommends buying a sturdy, high-quality scratching post. If it’s lightweight, it may topple over and frighten your cat, she says.

Granted, this is easier said than done, but you only have to trim the very tips of your cat’s nails, says Sherry Woodard, an animal behavioral consultant at Best Friends Animal Society in Kanab, Utah. She recommends asking your veterinarian to show you how. In addition, trimming your cat’s nails with a co-groomer can be helpful.

“It’s easiest if you have someone distract the cat with wet food treats and gentle petting while helping to hold the cat,” she says, adding that you can also consider purchasing a cat grooming bag, which helps to restrict a cat’s movement during nail trims.

These are vinyl caps that are glued onto your cat’s claws, making it so that the claws aren’t sharp. They generally last for a month or so before you have to put new ones on, and Woodward recommends asking a professional to show you how to put the caps on. A cat grooming bag might also be useful for putting nail caps on your cat, too.

Wilhelm suggests covering your furniture – or at least the part your cat likes to scratch – with double-sided tape. The hope here is that your cat will eventually realize that double-sided tape is no fun to scratch and will instead turn to their scratching post, leaving you free to uncover the furniture once they’ve made this adjustment permanently.

You can also try to spray your furniture with cat repellent, a scented spray that can help curb your cat’s behavior, says Kelly Meister-Yetter, a writer and animal activist.

“Although you won’t be able to smell it, the scent will deter your cat,” Meister-Yetter says.

6. Catch Your Cat in the Act

This is probably the most time-consuming strategy, but you can utilize your outdoor voice every time your cat starts scratching indoors, says Gregory Golinski, a team assistant at Love That Pet Gold Coast North vet clinic in Queensland, Australia.

“The one thing that seems to work when our clients have scratching issues with their cats is to make a loud, scary noise every time it happens,” Golinski says. “You could clap your hands really loudly or make a hissing noise for instance, so that your cat associates this unpleasant sound with scratching furniture.”

It will likely take more time, as you’ll need to be in the room with your cat every time they start scratching to discourage the behavior, and it will likely be more difficult to train an older cat to stop scratching using this method versus a kitten. “Cats are stubborn creatures, and it’s difficult to make them change their habits,” Golinski says.

Wilhelm has used pheromone plug-ins to calm nervous, anxious cats who may be prone to scratching furniture when their parents are away.

“You simply plug them in and almost immediately, you will notice that your cats are more inclined to nap than claw,” Wilhelm says.

8. Play With Your Cat

Woodward suggests dragging cat toys over scratching posts “to direct their play in wanted ways.” She says that it’s also a good idea to end play sessions with a treat.

The idea is to teach your cat that the scratching post is associated with playing and treats, while scratching the furniture equals no fun or food. Woodward recommends play sessions even if your cat’s nails have been trimmed or capped.

Whatever you do, try to have patience, and don’t assume you can get a cat to stop clawing if you haven’t given them something else to direct their scratching.

“Cats need to claw something,” Wilhelm says. “It’s their way of marking their territory.”