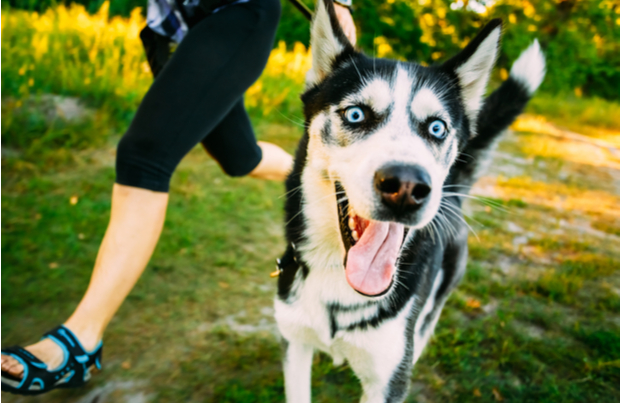 Think your dog is behaving badly? You may want to hold off on placing all the blame on your four-legged family member. Because when it comes to poor canine manners, pet parents are often the cause of unwanted behavior.

Here are eight pet etiquette mistakes you might not even realize you’re making—and how to fix them.

While most dog lovers would be happy to interact with practically any dog, there are a lot of people out there who don’t feel the same way, explains Irith Bloom, a certified dog behavior consultant and the director of training at The Sophisticated Dog, a Los Angeles-based dog training company. “Some of them may have been attacked or bitten by a dog in the past and others may not like animals at all,” she says. “There are also people who are allergic to dogs, and in some cases, people just don’t want fur or drool on their clothes.” Whatever the reason, strangers have the right to their space and privacy.

Bloom says it’s a good idea to teach your dog to wait for a signal from you before greeting people. “Instead of letting your dog rush up to, or drag you over to, every new person the dog sees, teach your dog that greetings only happen after you give a certain [physical or verbal] signal, such as the words ‘Say hello,’” says Bloom.

Allowing Your Dog on Someone’s Furniture

When you’re a guest in someone’s home, it’s “their house, their rules.” Some people simply don’t want their furniture covered in dirt or dog hair, and others may have pet allergies and would prefer pets stay off the couch or their favorite comfortable recliner.

To avoid uncomfortable moments, it’s best to always ask what the host wants and expects, says Joan Hunter Mayer, a Santa Barbara-based certified professional dog trainer and owner of The Inquisitive Canine, LLC. Is any room off limits? Can your dog walk into the kitchen or jump on the sofa? If not, what would be an acceptable alternative? You should ask all these questions in homes where you and your dog are guests. And even if your friends and family welcome you and your dog with open arms and give your pup free reign of the house, you might want to bring a special mat, towel, or bed for your dog so he can settle in, Mayer suggests.

Some dogs love to bark—they bark when they’re happy, when they’re playing, or when they’re excited. While barking behavior in a tiny puppy might seem cute, the constant barking (especially when you’re trying to have a conversation or taking your dog to a public area such as a park or restaurant) can be a bit overwhelming for people nearby.

That said, dogs usually bark for a reason. If your dog starts to bark as soon as another dog appears, your pooch might just be excited and trying to get the other dog’s attention. “If this is truly the case, and your dog isn’t upset by being around other dogs while on leash, then you can redirect your dog to something that is fun and just as rewarding,” says Mayer. For instance, you can teach your dog to look at you when another dog appears, says Mayer. “Make sure you reinforce this behavior with lots of praise, petting, and some treats.”

Bringing Your Dog Where He’s Not Allowed

Dogs are often not welcome in commercial or residential spaces so it makes sense to call before you decide to bring him along. “In general, any place where food is being prepared, a facility where people’s immune systems might be compromised, or a location where your dog might be injured are places to avoid,” says Bloom. If you’re thinking of bringing your dog to a restaurant, hospital, shopping mall, or entertainment venue, calling in advance to see if your pup is welcomed will save you a headache.

If you are given permission to bring your dog along, make sure he remains well behaved. “A well-behaved dog will not urinate or defecate in an inappropriate place, and will be quiet and polite: no barking, growling, lunging at, or biting people or other dogs,” says Bloom. “If your dog is likely to create a disturbance of any kind, or behave aggressively towards other patrons or their dogs, your dog should stay at home.”

Feeding Your Dog Under the Table

If you’re out to eat with your dog or visiting a friend’s house for dinner, slipping a tiny piece of food under the table might not be a bad thing if the food in question is part of your dog’s diet and you’re using little bits to reward behaviors you want—such as lying down quietly, explains Mayer. “However, if you’re inadvertently reinforcing begging, barking, or jumping up, then I’d avoid it,” she says.

Mayer recommends bringing the dog’s regular food to your dinner, as long as it abides with the restaurant policies. “If possible, have the dog food stuffed in some dog interactive toys so the dog can spend time eating his or her meal,” she says. This can help prevent barking and begging and make the situation more comfortable for everybody.

Allowing Your Dog to Jump on People

While you might appreciate the attention of a jumping dog when you get home from work, other people may not be as thrilled to let your dog jump all over them. This type of behavior can be especially distressing for elderly individuals or small children.

Jumping up is how dogs greet, explains Mayer, so if you want your dog to stop jumping on people, you need to teach him an alternative way to say “Hello!”. “Four paws on the floor, a sit, or a down are three useful behaviors that can gain the same attention the dog wants, but in a more human-friendly way,” she says.

A smelly dog is never pleasant to be around and can quickly ruin the atmosphere for everybody. “You don’t have to be particularly sensitive to odors to be upset by the odor of a smelly dog,” says Bloom.

This is even more important if you’re visiting somebody or bringing your dog with you to an indoor venue. A quick bath earlier in the day or the day before might be enough, but if it’s muddy, consider bringing along wet towelettes to clean up Fido’s paws before you step inside a building. If it’s raining outside, consider outfitting your pup with a rain jacket so his fur doesn’t get wet. Wet dog fur can increase odors and encourage dogs to roll on furniture and carpets to dry off.

Allowing Your Dog To ‘Go’ Anywhere

While most pet parents are conscious of not letting their dog poop in people’s lawns while out for a walk, they might not be as careful about where a dog urinates. “High traffic areas where people spend time should be avoided, as well as someone’s personal property that can’t be washed off easily—statues, mailboxes, planters, and building walls,” says Mayer.

If your pup is on a dog leash, gently pull him away from the areas you don’t want him to use as his personal toilet. “Also, one cue I find useful is ‘Leave it!’ which is the cue for asking a dog to stop what he is doing at that time and to come over for a reward,” she says.