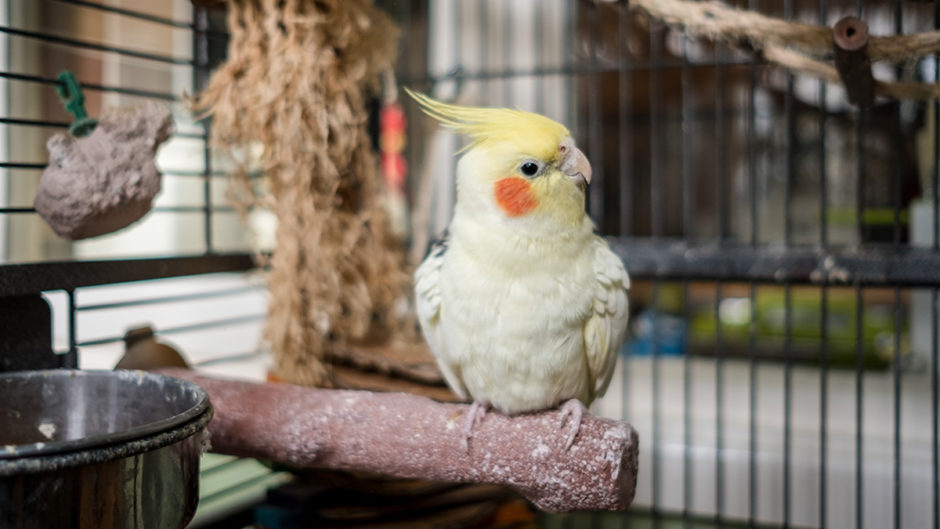 When an object (person, another cockatiel, toy) of a cockatiel’s affection does not return it, the bird might turn on it in an aggressive manner.

Although there is a lot of information about the big birds’s negative behavior during breeding season, people sometimes forget about the small birds and their hormones. Cockatiels, in particular, are known for their moodiness during this time.

Mature male cockatiels often act obsessed with a person or object. When that object does not return their affection, the bird might turn on it in an aggressive manner. A friend of mine’s male cockatiel absolutely loved a blue velvet sofa pillow. He flirted with it, sang to it and became incensed when it was removed from his amorous attentions. She finally hid the pillow in the closet until his hormones calmed down. If you are the object of your cockatiel’s affections, we need to deal with his behavior differently.

You might be the recipient of your bird’s kisses and other attention in one moment and, in the next, your bird is biting you or attacking your face. What you are experiencing is a result of mixed communications. Your cockatiel sees you as his mate. As far as he’s concerned, you should be flattered! Most likely, your cockatiel is biting because you are not behaving as a proper mate should. He is frustrated. A cockatiel mate usually would not behave in such a manner that would warrant a bite. So it might appear that your cockatiel’s behavior is out of control, but to him, you’re the one not making sense!

When I began working as a behavior consultant more than 30 years ago, I did not recommend allowing birds on the shoulder under any circumstances because of the many people with permanently scarred faces from companion birds. (At that time, many pet birds were in fact wild-caught birds.)

Of course, this type of bite only happened if the bird was close to the face. A shouldered bird also was likely to bite when a person tried to remove the bird from the shoulder. That problem greatly decreased if the owner kept the bird at a level where its head was at the person’s chest level.

Today, most companion birds are hand-fed and domestically bred, but I still recommend keeping the shoulder bird-free until the individual bird learns the basic “rules” of the house, one of which is no biting. Once the bird understands this, I allow sitting on the shoulder. The moment that a bird misbehaves, I return him to mid-chest level.

Even with monitoring, some birds simply do best when they are not on the shoulder. I have a scarlet macaw, Bigette, who is this way. Baby, my blue-and-gold macaw, however, sits on my shoulder without any problems.

Sometimes, changing the environment of a hormonally charged bird lessens or eliminates sexual behavior. The change can be as simple as moving the bird cages from one location to another or rotating the cages. Also, make sure that your cockatiel does not have any locations, in or out of the cage, that duplicate nesting conditions, such as any small, dark, snugly area. This includes the darkened area under a low feeding dish. That type of environment tells the bird’s body that nesting is a possibility and might increase hormonal production and nesting behavior. This goes for female cockatiels, too.

Teach your cockatiel new whistles, words, games or behaviors. Sometimes, just talking differently to your bird shifts the bird’s focus onto other things. Talk to him as you go about your chores, explaining each activity. Or take him for a ride in the car. Make sure that he has a comfortable carrier that it is partially covered so he can manage his visual stress levels by moving in and out of the covered area.

Avoid snuggling your cockatiel too closely. When my birds are hormonal, I snuggle their heads and kiss them, but I do not snuggle their backs. This prevents the stimulation of the bird’s nether areas, if you get my drift.

Make a point to walk away when your cockatiel wants to engage in amorous behavior. Take care not to “reward” negative behavior by giving him “good” or “bad” attention during those times. If he’s biting, use hand-held bird perches to handle him until he cools off.

Longer daylight hours stimulate many birds, cockatiels especially, to breed. Put your cockatiel to bed earlier than you normally do. Start with 8 to 10 hours of daylight, and if his behavior improves, gradually increase the daylight hours to 10 to 12.

Although these suggestions seem simple, they can be extremely effective, especially if you implement all of them during the same period of time. Your cockatiel will see that you are not his mate and his behavior will change on a gradual but continual basis if you continue to follow these suggestions.