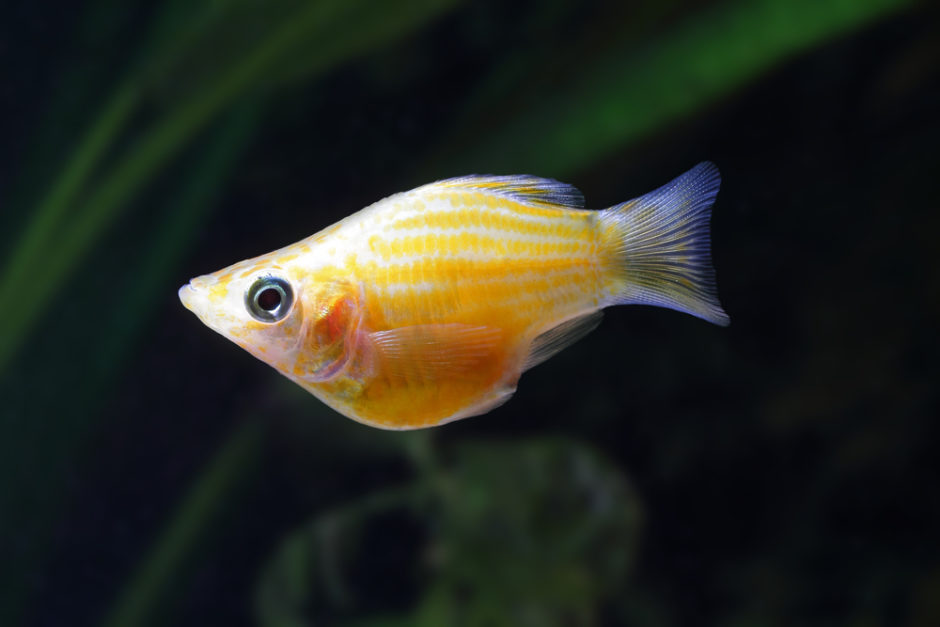 Sailfin mollies (Xiphorphus spp.) are big, spectacular fish that make for a colorful, active display in larger tanks. They prefer bright light and spend their time in the open, displaying for one another, for the aquarist and just for the heck of it. They are not for small tanks, and a trio should not be kept in anything less than a 30-gallon tank. For them to really show their best, they should be kept in a well-planted 4- to 6-foot tank in a group of up to a dozen adults.

These fish are native to the coastal areas of North America from North Carolina to Mexico. The beautifully colored varieties we see in the hobby are raised on farms in Florida, Texas and Southeast Asia.

Female sailfins of the domestic strains have been bred for similar colors to the males. They are generally larger than the males but have a normal-sized dorsal fin. A really large female can reach 5 inches.

Sailfin mollies are primarily algae-eaters, though in the course of eating algae in the wild, they consume many small animals, as well. They will also opportunistically feed on crustaceans, worms and insects. Captive sailfins will do best on a diet rich in algae, so the aquarist should encourage algal growth in their tank with the help of bright lighting. They will also take algae-based flake foods. A couple of times a week, they should receive some meaty foods like frozen or freeze-dried brine shrimp, bloodworms or krill. They also relish the occasional small worm.

The most important factor for keeping and breeding healthy sailfins is to give them the proper water, which should be clean, hard and alkaline. This water should also be high in carbonates, which is often best accomplished by adding crushed coral or shell grit to the tank. An efficient filter that provides good circulation is essential. Sailfins like a bit of current in their water. Give them plenty of water changes as well; I recommend 50-percent water changes once a week. This keeps the dissolved organic substances from building up in their water in the first place. Nothing can take the place of large, frequent water changes, especially in a breeding program.

One thing that domestic sailfin mollies do not require in their water is salt. The sailfins you buy in the store are farm-raised in hard, alkaline water. Salt is not used on most farms.

Although wild sailfins can tolerate very cool water, farm-raised sailfins do not seem to be as tolerant of this. For best results, they should be kept at a consistent 78 to 80 degrees Fahrenheit.

When given optimal conditions and a healthy diet, sailfins will do what comes naturally, and it won’t be long before you find fry in the tank. Well-fed adults won’t bother the fry, though a hungry adult may eat its fry. In a well-planted tank without other large fish, your sailfins will soon form a small colony made up of fish of different ages all living together.

If you really want a large group of sailfin fry quickly, it’s best to move the female to a separate tank to let her drop her fry safely. Female sailfins can drop fry every 28 days. Keep track of the last time she dropped and gently move the female about a week before her due date. Chasing her around the tank can stress her and cause her to drop her fry early — premature sailfins rarely survive.

A 10-gallon tank makes a good maternity setup. Fill the tank with water from the main tank, and add a small filter, heater and a few floating plants. This will provide security for the mother and up to 100 newborn fry. As soon as she drops her babies, move her back to the main tank.

The fry can be fed on a similar diet to the adults and should be given similar care. They grow quickly, and within about a month, they will need to be moved to a larger tank or tub. They should be provided with a good source of calcium in their water, as the young males will need a lot of calcium to form the bones of their beautiful dorsals. There is also some anecdotal evidence suggesting that sailfins grown in clean water with a lot of water changes produce larger dorsals than those given fewer water changes, so keep this in mind when raising your fish.

Once the fry reach about 2.5 inches with good dorsal growth, they are ready for you to find homes for them. If you have a good rapport with the owner of a local fish store, you will likely be able to trade them for fish food and other supplies.