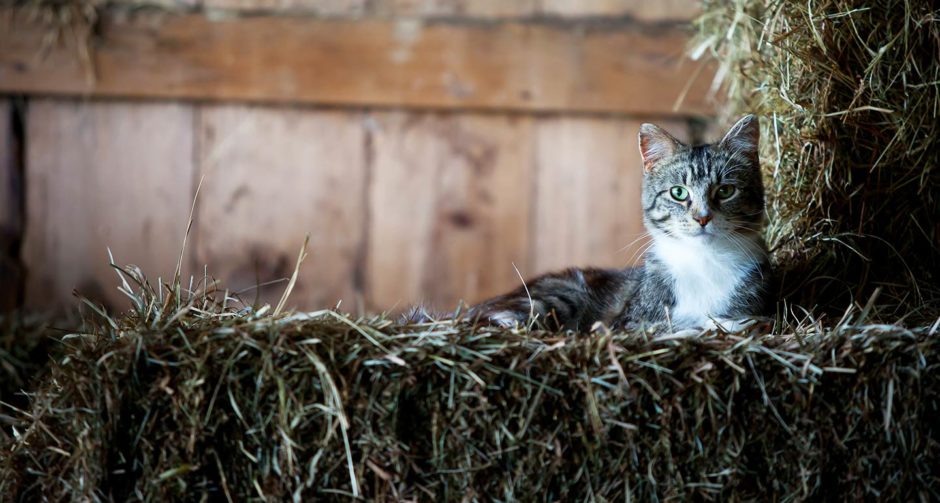 Leah Cullen had always thought of herself as a dog person. But when she went searching for a solution to a pesky mole problem on her acre of land in Western Pennsylvania earlier this year, she gained a whole new appreciation for felines—and working cats in particular.

Cullen's search led her to the working cats program at the Humane Animal Rescue in Pittsburgh, Pennsylvania, which places feral, semi-feral and so-called “difficult” cats in nontraditional homes like farms, ranches and other large plots of land. The cats provide pest control, and in exchange, they get to live in an environment better suited to their independent personalities.

Today, Cullen is a proud parent to two cats, Lucy and Linus (named, of course, after the Peanuts characters). Not only have they successfully battled the pests on her property, but they’ve found a place in her home and in her heart. “I wasn’t sure what I was getting into, but they’ve been the best part of 2020,” Cullen says.

Cullen says her cats have changed her perspective on what a pet can be— and she’s not alone. More than 13,200 working cats have found free-range homes in 2020, and many programs have long waitlists to adopt these uniquely helpful pets, according to data from Shelter Animals Count. Working cats provide a valuable service to pet parents, and in return, their parents provide them with love, care and a safe and spacious home—an especially meaningful exchange for cats who have nowhere else to turn. 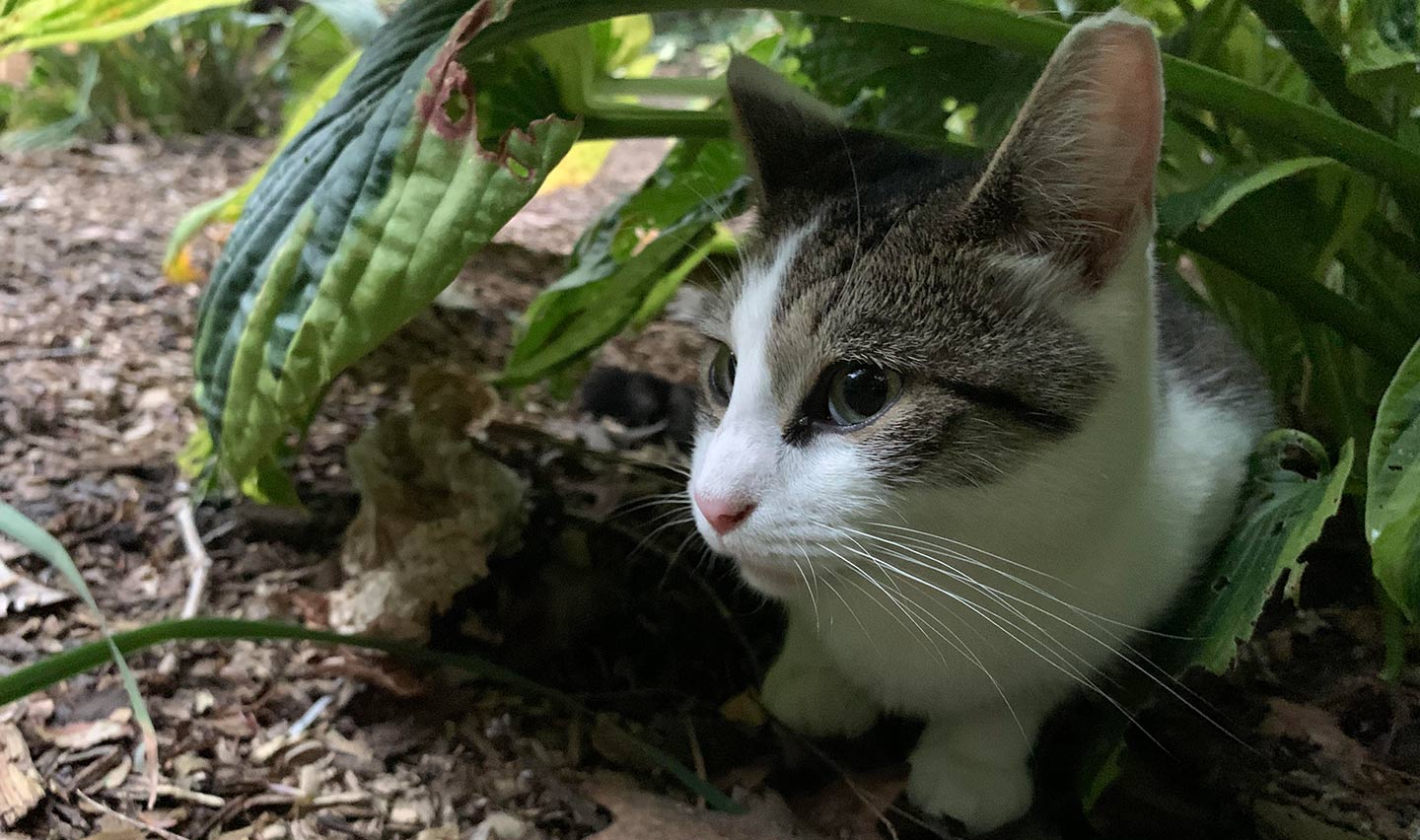 Not Your Average Cats

When you think of a pet cat, you might imagine a snuggly furball weaving between your legs or cozying up with you on the couch during TV time. But some cats are simply not meant to be domesticated. “Feral cats or semi-feral cats would not be happy in a house,” explains Leah Enderle, program and marketing coordinator for Tails Humane Society in DeKalb, Illinois. “It would be like taking a raccoon from outside that's lived its whole life there, and trying to make it sit in your lap.”

It’s often equally dangerous to leave a homeless cat on the street. There’s little support for the health and safety of feral and semi-feral cats, who often live in dangerous or abandoned environments, explains Theresa Samsingh Bachu, founder of For Animals in New York City. And for too many “unadoptable” cats, entering a shelter can lead to euthanasia.

That’s where working cats programs come in. They give so-called “unadoptable” cats a second (or perhaps third and fourth chance) at a healthy, stable life by placing them in homes with plenty of room and a purpose. For cats displaying behaviors like biting and scratching, oftentimes “the best way to get them to calm down is give them a job,” explains Erica Leonard, community animal welfare specialist and working cat coordinator for MSPCA-Angell at Nevins Farm in Methuen, Massachusetts. “Usually, that job is hunting or just patrolling the property. Cats are hunters and they’re natural predators.”

“If we go back to the traditional sense of why cats were domesticated in the first place, it was because they helped farmers with their rodent population and in turn, they were given shelter,” explains Melissa Graham, CFTBS, feline welfare specialist at Arizona Humane Society, which “employs” two working cats of its own, Simba and Nala, for pest control at one of the society’s properties. “As we grew alongside our feline friends, cats changed in shape and color, but they never really got rid of their hunting instincts.” 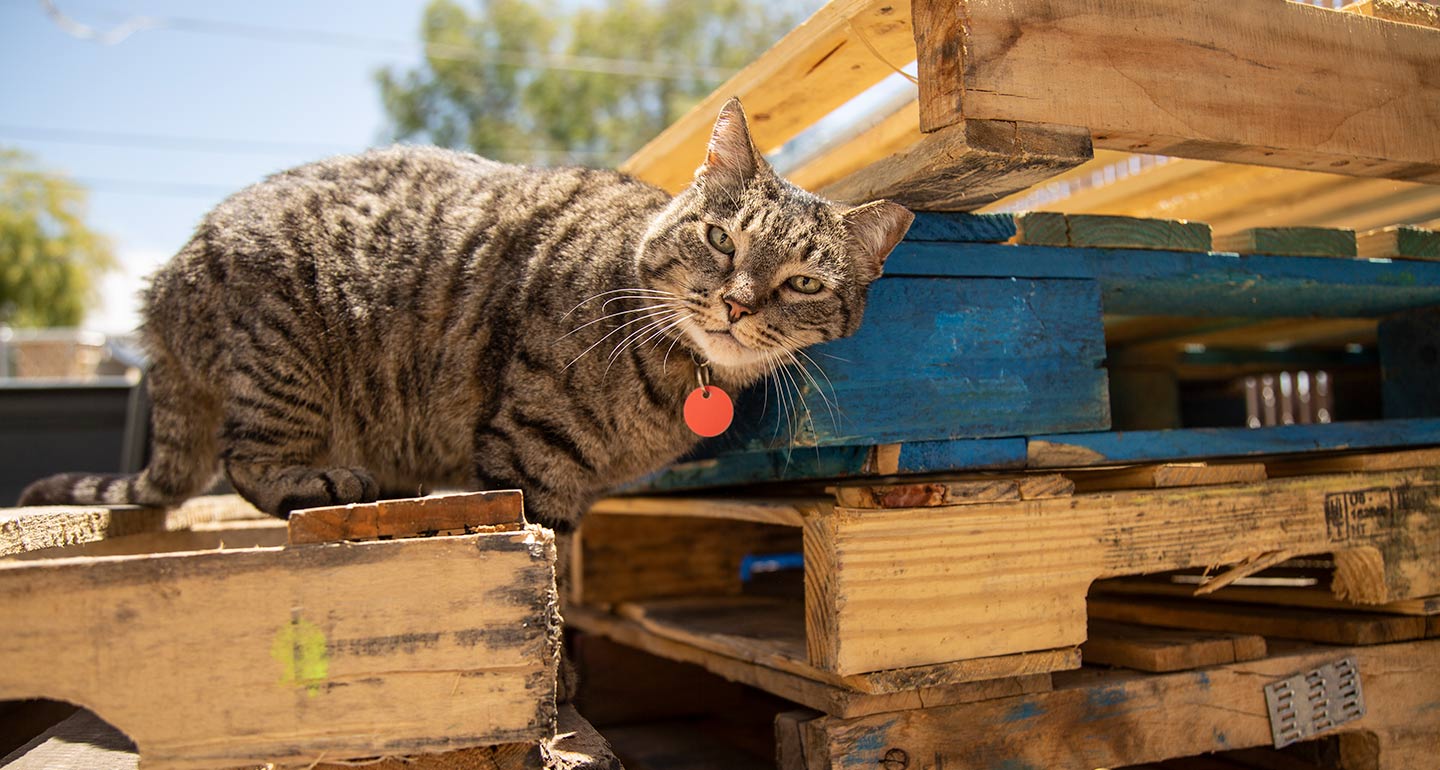 At the Humane Animal Rescue in Pittsburgh where Cullen got her two cats, the working cats program “has opened up the doors to give us the outlet to help so many more cats,” says Sarah Shively, director of admissions and relocation at the rescue, which has found homes for 60 working cats since they began the program late last year. In these spacious yet protected environments, cats have the space to act out their animal instincts—while offering a natural pest control solution to their adopters.

That’s exactly what drew Cullen to the working cat program: the promise of an eco-friendly solution to her mole problem. With her admittedly limited knowledge of cats, Cullen says she wasn’t sure what to expect from Lucy and Linus, who were both timid and uninterested in human interaction when they first arrived. Following the recommendations of the Humane Animal Rescue, she kept the cats in a crate outside near her patio for several weeks to let them adjust to their new environment and adopters. Many working cats programs recommend keeping newly arrived cats in an extra-large dog crate with food, water, and litter inside, as well as a small box where the cats can hide and feel safe while they adjust to their new surroundings. Their pet parents place the crate in an area safe from predators, and provide protection from sun and rain with a cover.

Still, despite all that setup, Cullen says says, “We even told the kids to say goodbye, just in case.” 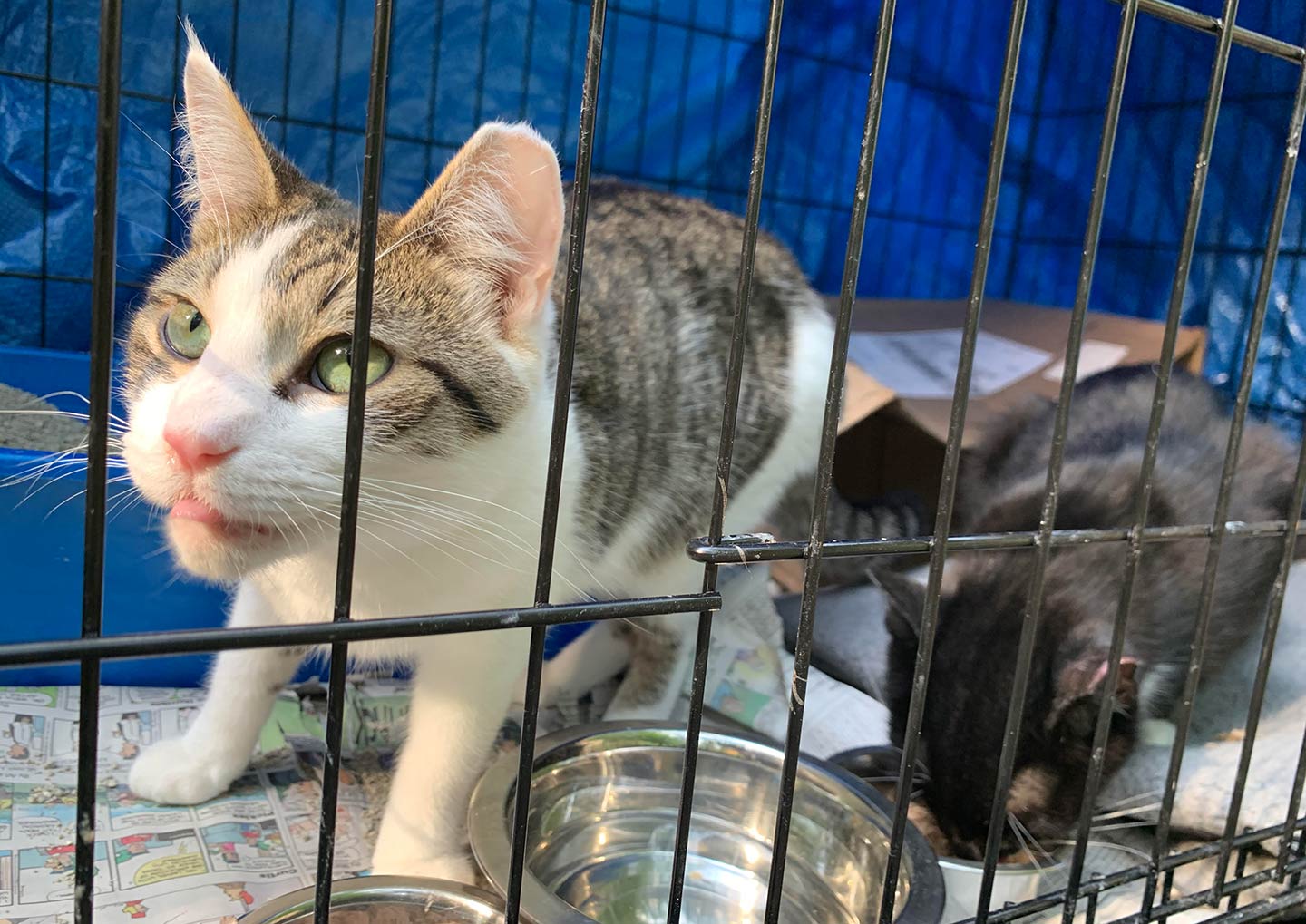 Lucy and Linus get comfortable inside their temporary enclosure. Courtesy of Leah Cullen

But after they were released, to Cullen's surprise, the cats stayed close. “It’s almost unbelievable until you go through it,” she says. “It’s been so rewarding, and they really blossomed into their true personalities. They were absolutely feral, but now they’ll come and sit in [my kids’] laps.”

While not all once feral or semi-feral cats will become this sociable, stories like Cullen's prove what rescuers have been saying for years: that cats who don’t belong in traditional homes aren’t “bad” or “unadoptable” in any way. They just need a chance to thrive in an environment where they have both purpose and freedom.

While Lucy and Linus found refuge in the suburbs, working cats are often placed in rural locations such as barns, warehouses, orchards, ranches, breweries and vineyards. The location is determined by what best suits the cats’ temperament, Leonard of the MSPCA says. If a pair of cats exhibits some sociability, for example, a winery with customers might be a nice fit, but cats who are a bit more prickly or skittish may be better off in an environment like a farm with fewer people to interact with.

Free-range environments might not be the best fit for every cat, but for working cats, these homes are the key to a happy, healthy life—and a more rewarding life for their parents, too.

“You're able to give these cats a purpose and incorporate them into your life. It's a no-brainer," Cullen says. "It's such an easy way to give back. And the payoff for us is huge.” 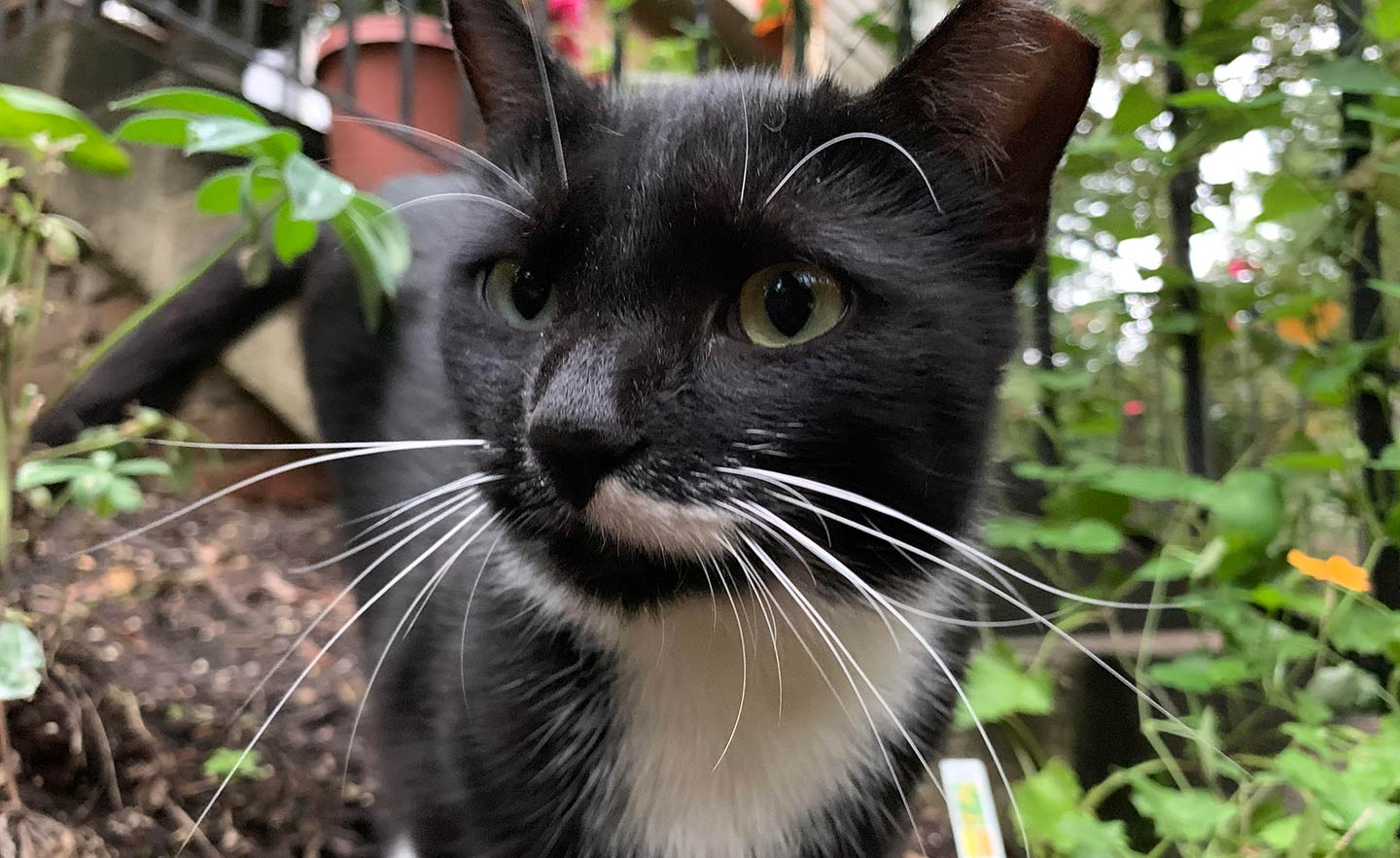 Is a Working Cat Right for You?

Thinking about giving a working cat a home? Learn more about these helpful pets, and what it takes to give them a home, with these facts from the Humane Animal Rescue:

Where can working cats live? Pretty much anyplace where there’s a job for them to do. Farms and large plots of land are common homes for working cats, but they can also help in smaller spaces like churches or greenhouses.

What do I need to care for a working cat? These requirements will vary, depending on the cat, but in general, working cats need:

How long does it take for working cats to adjust to their new homes? Most cats feel comfortable in their new environments by three to four weeks. That means you should be prepared to care for your cat inside an extra-large crate or other enclosed space for about a month after adoption. It’s best if you keep a regular schedule during that time.

How do I adopt a working cat? Start by contacting your local shelter or rescue to find out if they have a working cats program. Staff there can walk you through their individual adoption requirements and the application process. If you’re a good candidate, you could soon add a new feline to your family!

By: Alyssa Sparacino
Alyssa Sparacino has been a digital health and wellness editor for more than a decade as well as a writer covering everything from travel and food to pregnancy and pets. Her favorite role, though? Definitely #DogMom. Alyssa and her husband adopted Zoey, a Sato from Puerto Rico in 2019, and have been doting over her ever since. If Alyssa's not out hiking, biking or adventuring somewhere, you can bet she's curled up with Zoey on the couch.