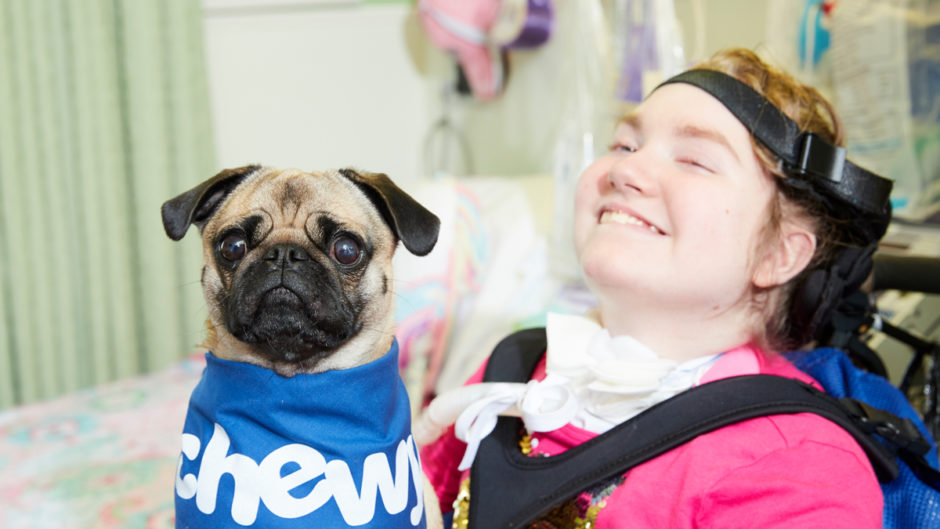 BCC resident Marrian is all smiles with therapy dog Lola on her lap. By Chewy Studios

There are two very important full-time employees who roam the halls of Broward Children’s Center (BCC). But instead of conducting exams and delivering test results, IVs and medicine, these four-legged “doctors”—or, “dog-tors”—deliver kisses, love and other feel-good therapy.

“The dogs create a different atmosphere,” says Katie Stoneback, a recreational therapist at BCC and dog mom to Callie and Lola. “When people walk in, [it doesn’t feel] stiff. [They] create a home-like environment.”

As the center’s only therapy dogs, Callie and Lola work 9 to 5, between five to seven days a week. In fact, the dogs even are even listed as staff.

“They actually have their names listed [on the therapy department],” says Myrna Miott, marketing manager at BCC.

These dogs help a lot. Sometimes the kids won’t do the rehab, but the dogs help get them moving. — Katie Stoneback, a recreational therapist at BCC and dog mom to Callie and Lola

While it might seem like long hours to us, Stoneback says both dogs love spending time with the children, and they do get their breaks. Plus, their hard work is much needed.

“These dogs help a lot,” she says. “Sometimes the kids won’t do the rehab, but the dogs help get them moving.”

When it comes to therapy with the kids, Callie and Lola each have their specialties.

“For Lola, she can go in the bed, wheelchairs. She’s also very funny. We can dress her up. She’s silly and easy going,” Stoneback says. “Callie is smarter and knows more commands. She also can feel the general energy of someone.”

Callie got her start as a therapy dog at BBC back in 2013.

“We were looking for a recreational therapist, and we had found Katie—who came [to the interview] with Callie—and [just] like that, she sold us!” says Denise Rusnak, program development officer at BCC.

At the time she was hired, Stoneback was a recent graduate. Her dream was to become a recreational therapist—with a dog included.

“I basically started [the pet therapy] program with Callie,” Stoneback says. “They were looking for a dog to be part of [a] therapy program and I had Callie, so it happened just like that.”

Then later on, Stoneback got Lola, who followed in big sis Callie’s footsteps.

To help offset the cost of the pet therapy program, online retailer Chewy donates pet food, treats and other supplies on a bi-monthly basis. Broward Children’s Center is a private, nonprofit organization, so a lot of their funding comes from donations or Medicaid. If donations don’t come in for their pet therapy program, the funds may have to come out of Stoneback’s own pocket, Rusnak says.

In addition to regular pet supplies, like dog food and treats, Stoneback provides Chewy with a special wish list of the specific items they need.

“We ask for flea and tick medication, heartworm prevention [and] grooming supplies. If we can save money on anything like that, that’s when we reach out for help. Chewy helps a lot with that,” Stoneback says.

Since 2016, Chewy has donated more than $4,500 in pet food, treats and supplies to BCC’s pet therapy program. And for these hard-working pups, the donations are well-deserved.

BBC’s therapy dogs receive pet supplies donated by Chewy as part of an ongoing commitment to support the program. By Chewy Studios

Both dogs make a huge difference for the kids staying at BCC. Their impact was clear during a recent visit to the center. For instance, 11-year-old Marrian Fizette was all smiles when Lola was placed on her lap. Marrian is unable to speak due to a traumatic brain injury. But with Lola, no words were needed. Her giant smile spoke volumes.

There are times when kids are there for months—even years at a time—away from their families.

“For the kids, they’re going to connect with a dog before a person,” Stoneback says. “Keep in mind these kids are not with their families, so it can be hard to connect with them. So, we use the dogs to build the relationship.”

“If you can get a kid to laugh, you can get them to do anything,” she adds. “It creates an environment that is relaxed and not structured.”

In addition to helping the kids, Callie and Lola help out the staff.

“They’re our therapy dogs, too,” laughs Ilana Hirsch, digital marketing coordinator at BCC. “The dogs definitely bring so much light [and they] make a difference.”

From graduating with an Audio Engineering degree in Chicago to writing about lovable pets at Chewy’s headquarters in South Florida, Lauren Bronston loves immersing herself in the creative. When she’s not writing and editing pet content, Lauren does even more writing in her spare time and has a passion for writing scripts for short film, TV pilots and even feature length films! To relax and unwind, she loves meticulously building music playlists and her vinyl collection.