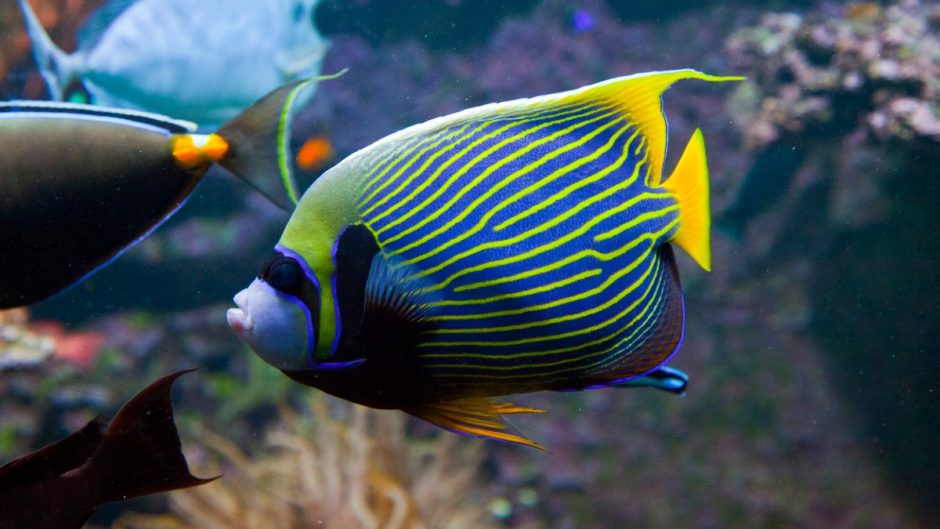 Watching fish is relaxing. It lowers your blood pressure. It slows your heart. It calms your nerves. The natural serenity of fish moving through water is one of the main attractions of aquarium-keeping. But then, your $2.00 fish beats up the $20.00 one, and there goes your blood pressure. Things don’t always work out as you expect.

This article is about freshwater bullies—but it is not about the kind of bullies that have no business in your community aquarium. For example, we won’t be talking about piranhas (Serrasalmus spp.) because we know they eat other fish—every kind of other fish—and we won’t be talking about bucktooth tetras (Exodon paradoxus) because we know they eat the scales of other fish. To expect such fish to behave in a community is unreasonable.

Rather, the bullies we will talk about are species we normally consider suitable community fish but are sometimes reported to misbehave. Let’s take a look at these eight freshwater aquarium fish and what you can do to prevent misbehavior.

The tiger barb (Puntius tetrazona) is one of my favorite fish. I’ve kept them many times over the decades. Tiger barbs have the perfect mix of activity, bright color and strong markings to make them attractive. As a former retailer, however, I can tell you that this is one of the fish that hobbyists most complained about. They complained that they nipped the fins of other fish, sometimes right down to the flesh. The tiger barb gets its name from its stripes, but it can be tigerlike in behavior, too—if you don’t give it what it needs

What it needs is company. Tiger barbs like to shoal. They chase each other around all day long, taking little nips to set up a pecking order. No damage is done because the aggression is spread evenly through the group. All are “happy,” but there is a critical mass to the size of the shoal. Keep too few tiger barbs, and they may start chasing and nipping other fish in the tank.

They may also start to damage each other. Groups of three or less are generally unworkable. With a group that small, a strong pecking order is set up with one fish getting all the trouble from the other two. Soon it dies, and there are two fish. Then the strong one picks on the weaker one until it, too, is gone. Hobbyists often see this, and they make things even worse by removing either the biggest bully or the fish getting its butt kicked the most. Either way, this makes a smaller group and re-concentrates the aggression. If you remove the dominant fish, the next most dominant fish becomes the most dominant.

The hobbyists who have problems with nippy tiger barbs usually have only one or two of them. You can see their eyes go wide when I tell them that the solution to their tiger barb aggression problem is simply to add more tiger barbs. It seems to fly in the face of reason, but you really need to keep at least six tiger barbs to make them behave. Groups of 20 to 50 are even better-behaved and are prettier, too.

Another fish that sometimes gets a bad rap is the red-tailed shark (Epalzeorhynchos bicolor). Some references — especially some of the ones copied endlessly on the Internet — even say that this fish is not a community fish. I wholeheartedly disagree! The red-tailed shark is another of my favorite fish, and I’ve kept it many times without problems. Its strong color and unusual shape make it a standout in a community. It’s a good scavenger, too.

However, there are rules. First off, keep no more than one red-tailed or similar shark (such as a rainbow shark or black shark) in the same aquarium. They just do not get along with each other — it will guarantee a fight. The red-tailed shark is also highly territorial. As it grows, so will its territory. This may be a problem in small tanks, with the fish trying to drive other fish out of its range, and there is nowhere for them to run.

I have to say, though, that I’ve never found this to be a problem. I currently have a nearly 4-inch specimen in a 70-gallon aquarium that doesn’t seem to be the least bit bothered by any of the other fish that come into its territory, though it clearly claims one side of the aquarium. Its tank-mates include harlequin rasboras, rummynose tetras, kuhlii loaches and a few others. Of course, none of those fish share the same shape and color as the shark, so they aren’t perceived as a threat.

The betta, or Siamese fighting fish (Betta splendens), has a name that says it can be mean, but this fish can mix very well into a community. There are just a few rules. First, keep no more than one betta per tank — males do fight viciously. Females pick on each other, too, though not so harshly. Also, males may kill females that are unwilling to breed. There are reports of betta specimens picking on fish of similar color. For example, it may be wise to avoid mixing red velvet swordtails with red male bettas to keep the betta from biting them.

Bettas are territorial. Avoid mixing them with species that share the same territories, such as gouramis. Finally, do not mix bettas with fin-nippers (such as the tiger barbs mentioned earlier). The long fins are too tempting, and the slow speed of the bettas makes it too easy. Bettas are actually more at risk from the other fish in the tank than the other way around.

You can find the inexpensive convict cichlid (Archocentrus nigrofasciatus) in two common forms. There is a striped form (often sold as blue convicts) and a pink form. The fish gets its name from its stripes, which make it look like it is behind bars. A pair of convict cichlids can actually be a lot of fun in a community aquarium. The convict is relatively peaceful—for a cichlid—and gets along with most fish. However, they breed readily, and that’s where the problem comes in. Convicts are territorial, more so when they spawn.

They dig a nest in a corner of the tank, or under a rock or piece of driftwood, and guard it well. The convict pair drives off any fish that comes too close. Other cichlids will be seen as special targets and treated most harshly.

Mama and papa convicts normally do no damage to invaders (they only drive them off) — but there is nowhere to run in a small aquarium. So, the other fish may be unable to escape a few pecks. Convicts grow to 4 inches, and their territory grows with them. Simply make sure you give the pair a sufficiently sized aquarium, and you should be able to enjoy watching them herd a shoal of babies right in your community tank. I recommend keeping convicts in aquariums that are at least 30 inches long to give sufficient room.

The blue or three-spot gourami (Trichogaster trichopterus) is a very popular fish but is often reported to be too aggressive. All gouramis are territorial. They like to claim a section of the tank, usually near the surface at the edge of some plants, and defend it. Usually, this isn’t a problem. The blue gourami is usually tolerant of the other fish. So, keeping just one gourami (of any species) in a community helps them get along well with everyone.

It tends to become a problem when there is more than one gourami in the aquarium. They see each other as competitors for the same territories, competitors for mates or as prospective mates. Battles can ensue. Really, the behavior is similar to that of their relative, the betta. In large aquariums, it’s less of a problem because there is more room for fish to run and hide. However, the blue gourami grows to 6 inches, so a big aquarium may not be as big as you think. I recommend at least a 29-gallon community for one small specimen of this fish. A 55-gallon (or larger) aquarium is ideal for a community containing a full-grown blue gourami. I also recommend keeping no more than one gourami species per community.

Do you remember how adding more tiger barbs makes them behave better? That technique can work here, too. It’s possible to add enough gouramis so that none can claim or defend a territory. So, they give up and get along. It’s why the fish don’t fight much in dealers’ tanks. However, it’s an unnatural way for gouramis to live and is not the best way to keep them. Plus, you have to be a real gourami nut to want to fill the whole tank with them.

The Chinese algae-eater (Gyrinocheilus aymonieri) is a fraud. It doesn’t come from China, and it barely eats algae. Worse, it often feeds off the body slime of other fish, injuring or killing them. Many hobbyists end up with it as the only fish in their tank without knowing why.

Who would suspect an “algae-eater” to be anything but harmless? Personally, I wish dealers would stop stocking this fish. If you have a Chinese algae-eater, there are only two things you can do to prevent it from bothering your other fish. Feed it very well to distract it, or get rid of it.

The skunk loach (Yasuhikotakia morleti) also sells under several other names: skunk botia, Hora’s loach, dwarf skunk loach and others. It’s a cute little fish, growing to about 4 inches. Sadly, it often becomes nippy. Many hobbyists have no trouble with it at all if it is kept well-fed and fat. Others find it to be nothing but a nippy sociopath.

If your specimen causes trouble, try feeding it heavier with sinking pellets. Should that not work, there will be no choice but to remove the fish from the tank.

Who would ever expect an angel to be a devil? In most cases, angelfish (Pterophyllum scalare) are indeed angels. They mix very well in a community aquarium—as long as you don’t mix them with fish that will nip their long, delicate fins. And I highly recommend these fish—angelfish are an all-time favorite of almost every hobbyist.  Angelfish are cichlids. Like other cichlids, they are territorial.

However, angelfish are cichlids. Like other cichlids, they are territorial. You’ll see young specimens jockeying for space and setting up a pecking order. It’s no biggie. What you have to watch for are adults that pair off. They will become much more protective of their territory, especially toward other angelfish. Submissive tankmates may be bullied away from food, stop growing and even starve.

If this happens, you can do two things. First, jump for joy that you have pair-bonded angels. They will almost certainly spawn at the next water change. It’s great fun to watch them breed. Second, consider moving the other angelfish into another aquarium where they won’t disturb the breeding pair, and vice versa (alternately, move the pair).

Do the Right Thing

So, we’ve covered a few community species that are sometimes known to become bullies, and I’ve given you some tips for dealing with them. But let me close this article by reminding you that you should always research the compatibility of a species before you buy it. It’s better to prevent problems than try to fix them. Know what the fish eats, its level of aggression, how big it grows, and whether it’s a territorial loner or a gregarious shoaler. Happy fishkeeping!