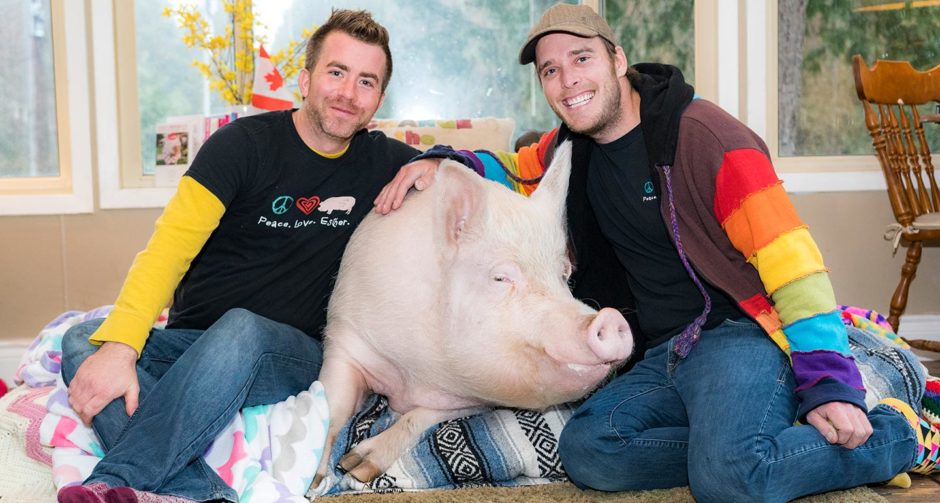 The social media famous Esther the Wonder Pig may have undergone some serious struggles throughout her life, but now she’s living large—in every sense of the word.

When Steve Jenkins was contacted in 2012 by an old friend who asked him if he wanted to adopt a young “micro pig,” Jenkins didn’t hesitate. He also didn’t consult with his partner, Derek Walter.

The little piglet only weighed 4 pounds, but according to Jenkins, Walter still wasn’t very happy about their new pet.

“At first, it was a big surprise and it took him a few weeks to warm up, but when he saw how cute and clever she was, not unlike our dogs, he fell in love with her,” Jenkins says.

After Walter got on board, they took Esther to the veterinarian and learned a shocking truth.

“He saw her cropped tail and said that no one would crop the tail of a micro pig,” says Jenkins. “He said we had what was likely a full-sized commercial pig.”

The partners, who lived in a suburb of Georgetown in Ontario, Canada, at the time, were stunned. What would they do with a pig they thought would not grow beyond 250 pounds?

They held out hope that they had a potbellied pig, rather than a full-sized commercial pig, but it didn’t take long for them to have to face the truth of the situation. 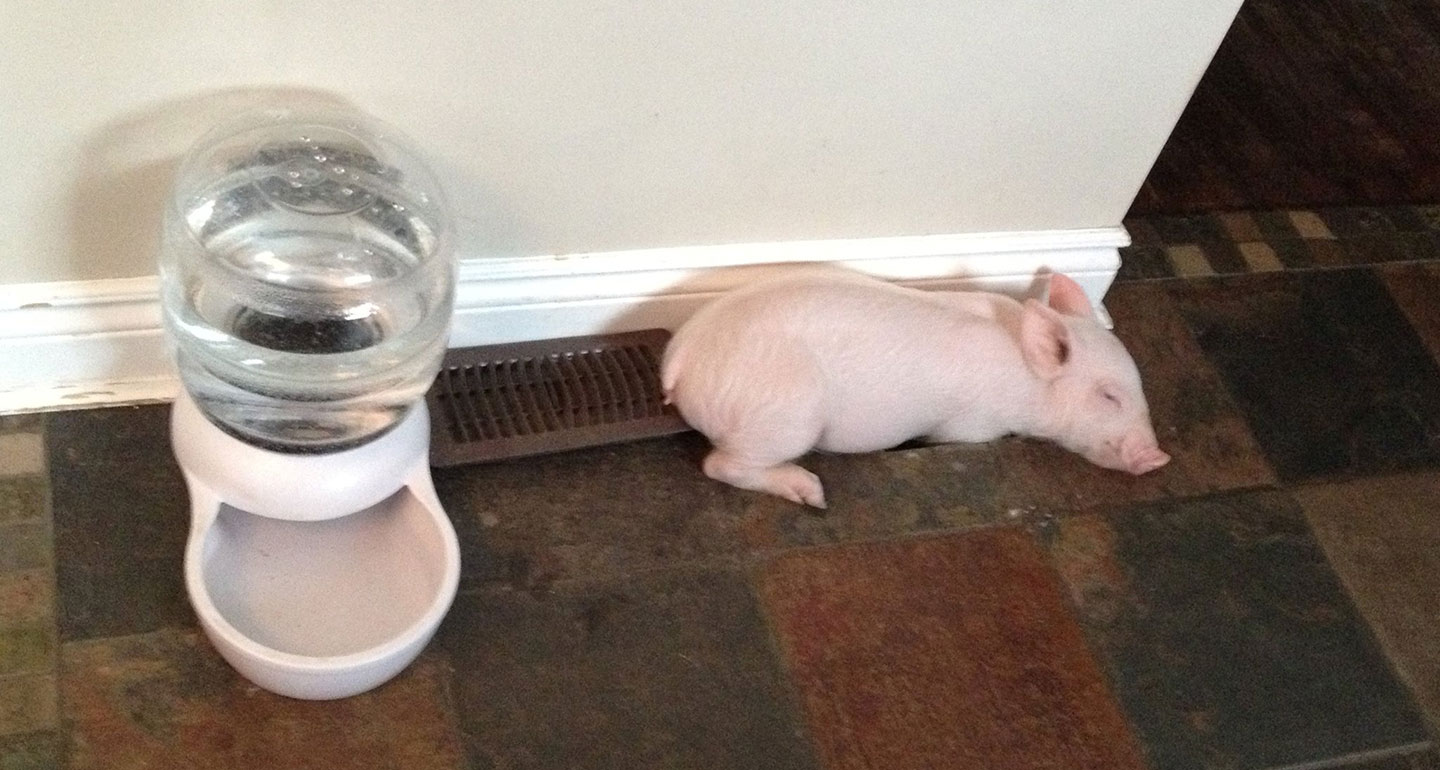 When Esther exceeded 250 pounds after a year, Jenkins and Walter knew they were in trouble.

“We knew pigs grow to full size after two years,” Jenkins says. “In that second year, she grew at a rate of about one pound per day.”

Jenkins, who was in real estate at the time, put Esther on social media, dubbing her “Esther the Wonder Pig,” and dressed her in costumes and posted about her daily antics. It was more for friends and family to keep up with their unusual pet, but as Esther grew, so did her following. Just through friends and family sharing, she received 100,000 likes on Facebook within 80 days. Jenkins almost considered taking the pages down, wary of the attention due to the fact that Esther wasn’t allowed in their jurisdiction.

“By then we knew she wasn’t allowed in our city,” Jenkins says.  “We knew we had to move, but we were afraid they would come and take her before we could.”

By that time, the partners had become vegans and wanted to save other commercial animals destined for the dinner table. They came up with a plan, but it would require them to step out of their comfort zone.

Starting a Sanctuary: An Unlikely Path

The couple used Esther’s wildly successful social media fame in 2014 to crowdsource $440,000 to purchase a 50-acre farm in Campbellville, Ontario, about a half hour from where they lived. The farm would eventually become the Happily Ever Esther Farm Sanctuary, but not before a lot of hard work.

“The property hadn’t been used as a farm for 25 years, there were no fences and the pastures were meadows not suitable for grazing,” Jenkins says. “We hit the ground running and people who had donated to the farm would come and help us.”

Before they knew it, Jenkins had a donkey named BJ, and a horse named Escalade also arrived at the sanctuary.

Running a farm sanctuary was never on Jenkins and Walter’s radar. Jenkins was in real estate and Walter was a magician when Esther entered their lives.

“I think everyone considers themselves an animal lover,” Jenkins says. “We had an awareness about commercial farm animals, but we [were] turning a blind eye. But after Esther came into our lives, we couldn’t think of her and pretend other pigs were different. Esther became like a dog, and we couldn’t consider eating our dogs. She’s a big part of the family.”

Now, they have both devoted themselves full time to the charitable organization, which aside from providing a safe haven for abused, neglected and abandoned farmed animals, aims to help others see commercial animals in a different light.

Jenkins says it’s been a journey, especially when it came to gaining nonprofit status in both Canada, where they had issues due to the nature of the farm animal industry, and in the United States, where much of Esther’s support originates. 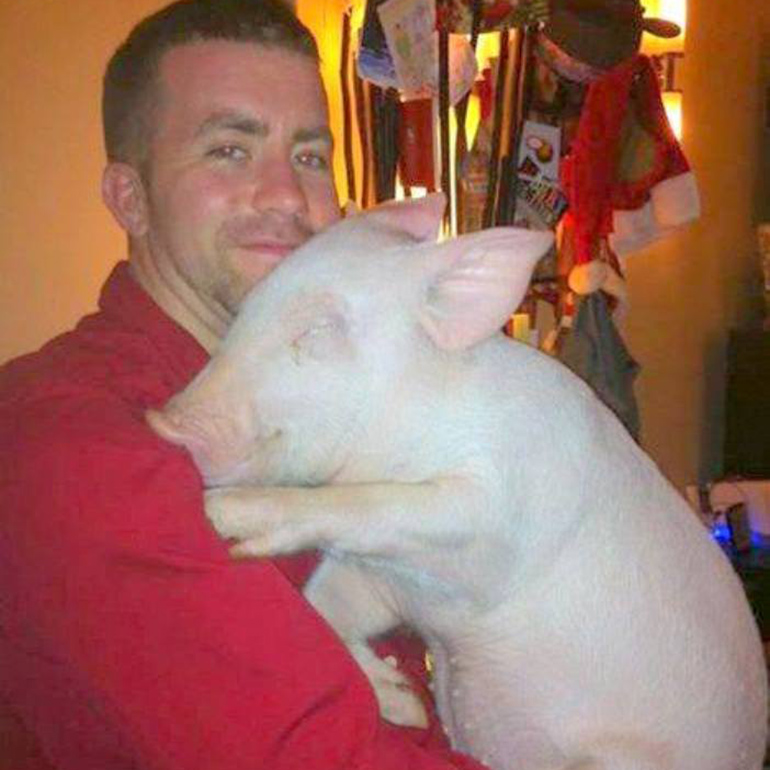 Not only has Esther touched her parents’ hearts, but also the hearts of others all across North America. One such person is Kim Rushnell, who joined Facebook in February 2014 as a way to keep up with friends and co-workers while she underwent treatment for throat cancer.

“I had given up,” Rushnell says, who has always loved pigs and has a collection of stuffed animals, statues and other pig items in her home. “I was in so much pain from the cancer and the chemotherapy, my kidneys were failing, but I saw Esther on social media and she gave me hope. I can’t explain it. Esther literally got me well.”

“I tweeted back right away and said I’d do it,” says the 58-year-old, who lives in Lindsay, Ontario. She made a pig-approved watermelon cake for Esther’s second birthday.

Since that time, Rushnell has not only become a social media volunteer coordinator for the organization, but the pet sitter for when Jenkins and Walter have to leave the farm for any period of time. 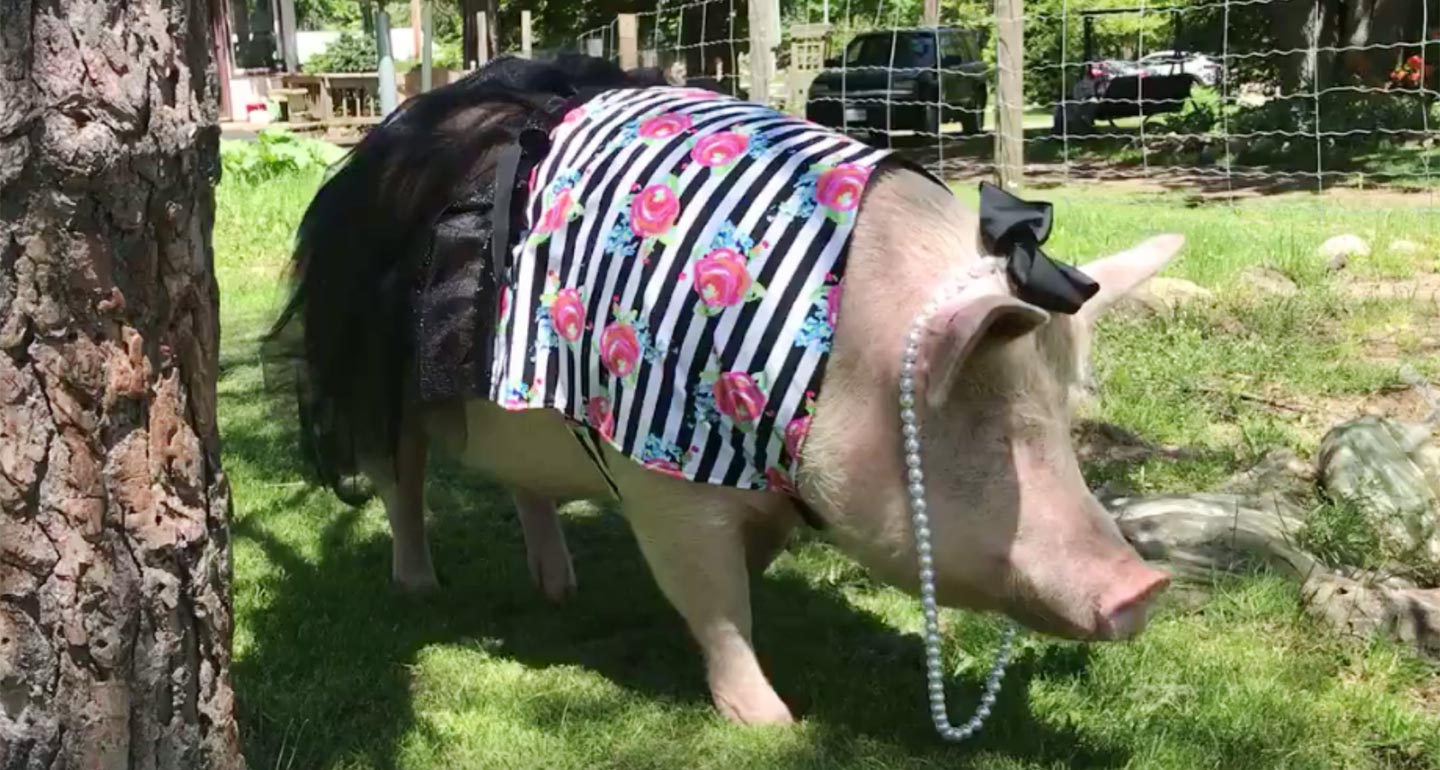 Esther’s life hasn’t been all roses. Her original canine siblings, Shelby and Reuben, passed away within days of each other in 2018, and Esther lost her best friends.

That same year, Esther was diagnosed with mammary cancer after visiting the vet for an unrelated issue. This presented another problem: Esther wouldn’t fit into any veterinary scanners in all of Canada.

“The only place that had one was Cornell University in the U.S., but because she was technically considered a food animal, she wasn’t allowed to leave the country,” Jenkins says.

Once again, Esther the Wonder Pig’s fans came through, raising $750,000 in three months for a scanner that is now used at the University of Guelph at Ontario Veterinary College.

“We raised $140,000 more than we needed, so we used that money to help pay for emergency vet care for other animal rescues,” Jenkins says.

Esther was treated and fully recovered, but suffered a hoof infection this year that required a toe amputation. She had to be hospitalized from May to August, but once again, bounced back, although a little lighter than her original 600 pounds. Jenkins says pigs have a natural lifespan of 10-16 years. 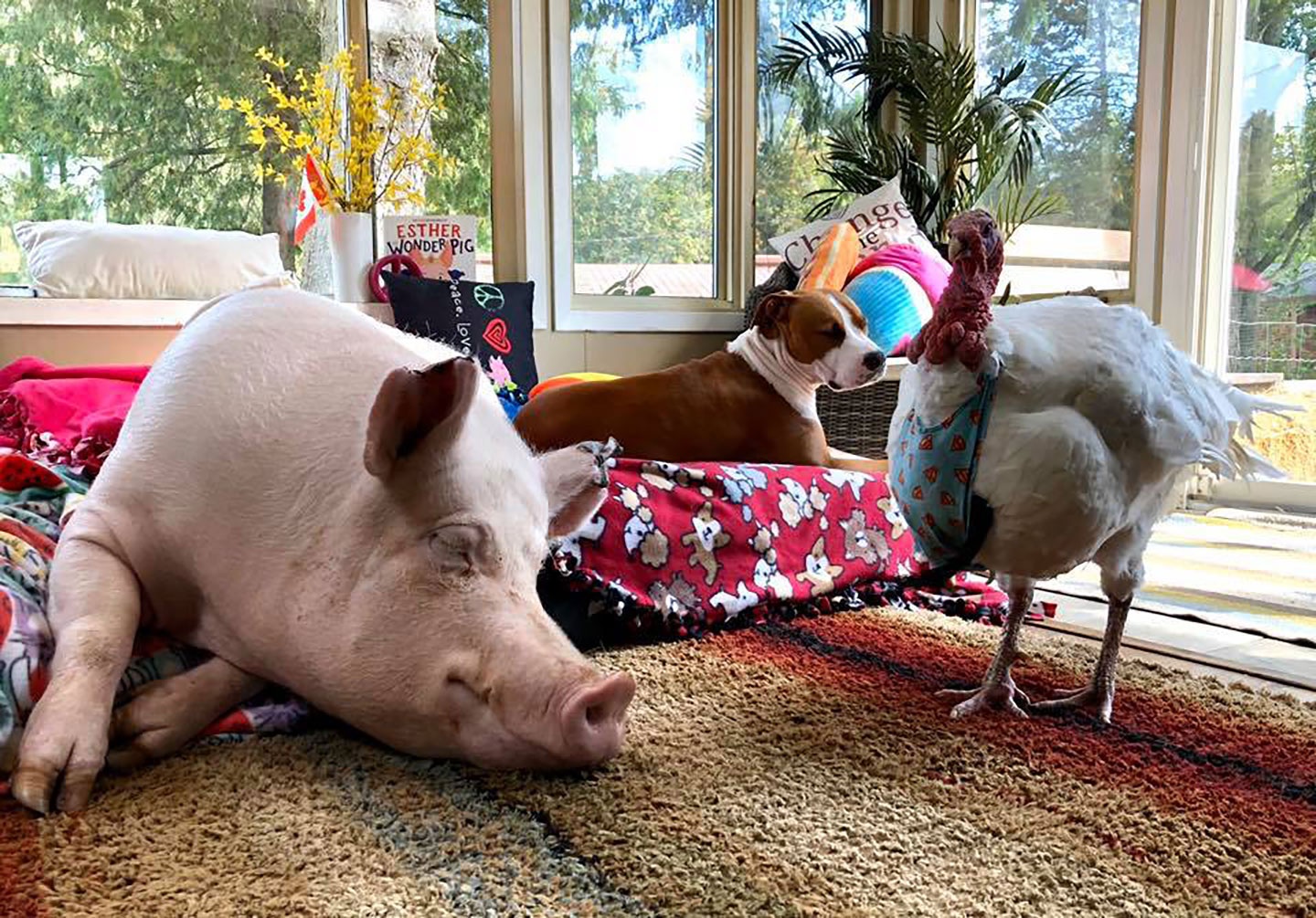 Via Esther the Wonder Pig/Facebook

Esther once again rules the Jenkins-Walter household and the sanctuary named in her honor. There are about 70 animals at the sanctuary, and she has a new best canine friend, Phil, and a turkey pal named Cornelius who has free range of the house and grounds.

Some of the other animals have also gained a loyal social media following.

“They all have names and their own unique personalities,” Jenkins says. “People come to the pages for Esther, but they sometimes develop their own favorites once there.”