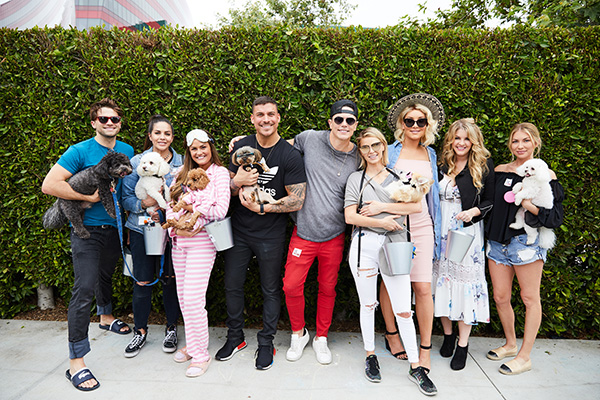 If you watch “The Real Housewives of Beverly Hills,” then you know that it’s no secret that Lisa Vanderpump is beyond dog obsessed.

The reality TV star and her husband, Ken Todd, have a thriving pack of pups at their Southern California estate, Villa Rosa. But Vanderpump’s love for dogs goes beyond her pack at home. All of her fans know how hard she works to help create a better life for dogs all around the world.

Vanderpump not only designs her own line of pet accessories, but she also runs a dog rescue center, Vanderpump Dogs, and launched The Vanderpump Dog Foundation, a non-profit dog charity, in 2016.

Vanderpump and her husband are massive opponents of the Yulin Dog Meat Festival that takes place annually in China. To raise funds and awareness in support of their crusade to halt the dog meat trade, Vanderpump hosted her third annual World Dog Day event on May 19, 2018, in the West Hollywood, California.

The event, held in West Hollywood Park, featured dog-friendly vendors, a doggy fashion show and a red carpet, which was graced by many dog-loving celebrities and their four-legged friends. It raised more than $80,000, which will go toward the efforts to end the Yulin Dog Meat Festival as well as other initiatives of The Vanderpump Foundation, according to organizers.

Inside The Vanderpump Dog Foundation’s World Dog Day of 2018

Teddi Mellencamp, the newest addition to “The Real Housewives of Beverly Hills,” hit the red carpet with her husband and kids in support of her costar.

“The fact that we can go and volunteer at Vanderpump Dogs is so amazing,” she told Chewy. “They’ve done over 500 adoptions, and we’re so thankful that we’re able to bring our kids and have them help be a part of it.”

The family recently lost their English bulldog. However, Mellencamp joked that there are negotiations for a new pet daily in their household.

“We’re just working our reward system, so the kids will be walking the dog, picking up the poop, and everything that comes with having an adorable pup,” she said. “It’s a great way to teach them responsibility.”

Leona Lewis arrived with her 2-year-old Doberman, Zion, in tow.

“I love dogs!” she said. “Their loyalty, companionship, they don’t judge you, they love you always. There are no conditions on their love.”

The singer revealed that since Zion lives with small siblings, he thinks he’s a lap dog.

“He’ll try and get up on the couch where the small dogs go,” she said. “He really feels like he’s one of the tiny ones.”

Dogs hold a huge place in Camille Grammer’s heart. The “Real Housewives of Beverly Hills” star said that she and her ex-husband, Kelsey Grammer, at one point owned 7 together.

Now, the main man in her life is a Havanese named Romeo Joe.

“He doesn’t get groomed all the time and he doesn’t wear rhinestones around his neck, but he’s pretty spoiled,” she said, of her pup. “He has a great life.”

Tom Schwartz and Katie Maloney from “Vanderpump Rules” arrived with their two little ones, Gordo and Butter.

“This has become one of my favorite days of the year,” said Maloney.

She told us that her dogs, who are her children, give her unconditional love and are extremely special to her.

“So being able to celebrate dogs today is everything and more,” she said.

“I just love them so much … we want to have like 10.  I talk to them more than I talk to anybody else in my life, easily,” he said, with a laugh.

Butter loves string cheese. And in terms of quirks, Gordo has a few.

Lance Bass and his husband, Michael Turchin, showed up with their canine pals, Chip and Dale.

“We named them Chip and Dale for a reason because they are always up to no good,” Bass said. “But they really are the sweetest.”

The couple disclosed that their two little pups have given them a jumpstart into the world of parenting.

“It’s really getting us ready for having our own kid,” Bass said. “We don’t leave the house because of these dogs. And we always rush back home like, ‘Ah, sorry we gotta go. We have dogs at home now.’”

“Vanderpump Rules” star Stassi Schroeder brought along her 3 1/2 -year-old Maltipoo, Luda, to partake in the afternoon.

“She’s the absolute best,” she said, of her pup, whom she affectionately referred to as “a tomboy.”

She admitted to having mom guilt over leaving her 15-year-old dog Zoe at home while she took Luda to the event.

“It’s a struggle in my head,” she said. “I don’t want to take her out and leave the other one at home, but the young one loves getting out to mix and mingle.”

Michelle Mitchenor, who stars on Fox’s “Lethal Weapon,” showed up with her energetic English Bulldog puppy Boom that pulled her down the carpet.

“This is my first dog as an adult!” she quipped.

The puppy clearly has stolen a piece of the actress’s heart.

“I didn’t understand how people cared so much about their animals,” she told Chewy. “I’d be like, ‘it’s a dog.’ But I love him so much. He’s got an Instagram page, and he comes with me on set. He’s my baby!”

And she still loves him, despite the fact that he got into her makeup collection while she was rushing to get ready for the day.

Taylor, who has been in hot water with viewers after admitting to cheating on his girlfriend with a fellow waitress at SUR Restaurant & Lounge, says he and his better half are doing well. When asked about who was in the doghouse more these days, him or the pups, he proudly admitted that the dogs were.

“He’s a great dog dad!” proclaimed Cartwright. “I’m not a morning person. He wakes up early in the morning to walk the dogs.”

“It’s my special time with them. We have a routine,” Taylor added.

The couple joked that Kingsley has a knack for posing for pictures once you whip out a camera and that Monroe is notorious for “giving you side-eye.”

World dog day was a huge success! @spoiledmonroe & I won the look a like contest ???

Later in the day, Cartwright and Monroe competed in a doggie look-a-like contest and took home the prize.