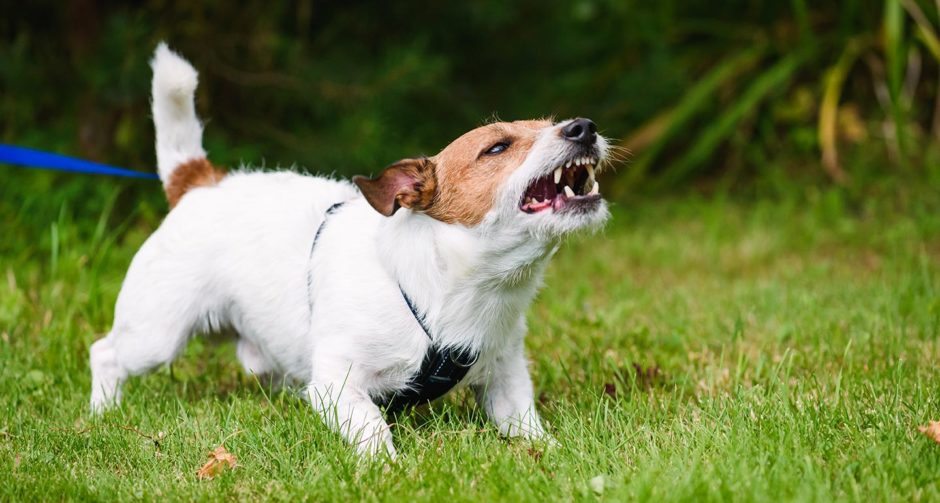 Some changes are to be expected as dogs age, such as a shift in activity level or sleep patterns. But some pet parents are also surprised to find their older dog starting to bite, or their dog becoming aggressive with age. Although all changes in senior dogs should be brought to the attention of a veterinarian, this particular problem could seem especially pressing to concerned pet parents.

Bella was a small, white, mixed-breed dog who loved spending time next to her person on the couch. For most of her life she could make the jump up in a single graceful leap, but as she got older it often took her a few attempts to clear the edge of the couch.

When Bella started falling backward instead of making it up onto her favorite perch, her person opted to pick her up and place her on the couch. But Bella began backing away when her person reached for her, and even though Bella and her person had a lifetime of snuggling together, the little dog often growled as her person cupped her hind end on the way up to the couch. Bella’s person dismissed the behavior as “grumblies,” but the dog’s behavior escalated to baring her teeth and “nose bumping” her person’s hand. Eventually Bella graduated to biting her person’s hand as she lifted her onto the couch, not hard enough to bruise or break skin, but in a way that signaled that she was uncomfortable with the handling.

After a veterinary exam, Bella’s person was surprised to discover the reason why her old dog was suddenly aggressive: She was dealing with painful arthritis in her back legs, which worsened by being handled.

Pain is one reason why your usually sweetheart of a dog may suddenly start to bite. Identifying the underlying cause of this change in behavior is the first step toward finding a solution.

Why Do Older Dogs Start to Bite?

If you’re the pet parent of senior dog like Bella and wondering, “Why is my dog being aggressive all of sudden?” your first course of action should be to schedule an appointment with your veterinarian. They’ll help determine the reason why your older dog is starting to bite. Below, we’ll explore some common causes of a senior dog becoming aggressive, as well as their possible treatments and solutions.

Pain is one of the most common causes of an older dog starting to bite, according to the American Veterinary Medical Association. Dogs who are uncomfortable or achy like Bella might not want to be touched, and can react to someone reaching out with preemptive growling, a warning air snap to discourage contact or even an actual bite.

Dogs might telegraph that they’re in pain in ways too subtle for pet parents to notice, or might not acknowledge their pain at all until accidentally pushed to reaction. Senior dog pain can manifest in a variety of ways, including:

Pain can be caused by conditions associated with normal aging, like joint pain or arthritis, bone and muscle deterioration, dental issues, flare ups from old injuries, or can result from undiagnosed illnesses, like cancer.

Learn more about dog pain symptoms, causes of dog pain and what you can do to manage it.

Though many dogs maintain a cheerful disposition throughout their lives, a combination of factors related to aging can lead to “grumpy dog syndrome,” the unofficial term for when a dog exhibits an increase in aggression due to the combined effects of aging. These may include mild pain (possibly due to one of the conditions listed above), balance issues, hearing and vision loss and the early effects of dementia.

Seniors who have aged into grumpy dog syndrome are the canine equivalent of older neighbors who yell “get off my lawn” to playing children. They’re set in their ways and need their predictable routines to stay content. And because of physical deficits like hearing and vision loss, they may prefer to be left alone rather than join a group.

Dogs who are entering that senior grumpy zone might behave in the following ways:

Senior dogs can experience cognitive changes that are like those seen in human Alzheimer’s. Called canine cognitive dysfunction (CCD), this progressive decline is more dramatic than changes that can be attributed to normal aging.

“Canine cognitive dysfunction is a slowly progressive behavioral change that leads to declines in several aspects of a dog’s life,” says Holly Brooks, VMD, a small animal veterinarian at Quakertown Veterinary Clinic in Quakertown, Pennsylvania. “Similar to humans, it is related to plaques that form on the brain. There can also be decrease in brain mass as well.”

CCD, also known as dog dementia, includes a cluster of predictable indicators, including personality shifts; formerly standoffish dogs might begin seeking out more attention, and dogs who were friendly in their youth might begin reacting aggressively. Because of the attendant confusion, CCD dogs might seem to be aggressive all of a sudden and escalate to biting.

How to Stop Older Dog Aggression

An old dog suddenly becoming aggressive is an issue that should be evaluated by a veterinarian as soon as possible. Once your vet determines the root cause of the change in temperament, you can begin to address it with treatments and exercises.

Solutions for Dog Aggression Due to Pain

Pet parents should work with their veterinarian to diagnosis the medical reason between their dog’s pain and treat it accordingly.

Senior dogs who bite due to pain will likely exhibit some sort of indicator prior to the bite, so pet parents should understand and acknowledge what their dog is communicating, and avoid pushing the dog into a scenario where they resort to biting. Prior to their initial vet check-up, pet parents should avoid contact if a dog is signaling that they don’t want to be pet or picked up.

The memory of pain and fear of contact can linger even after pain management treatment begins, so pet parents should help change their dog’s perception of touch on a formerly painful area by pairing the action with small treats.

Solutions for Dog Aggression Due to Age-Related Intolerance

One of the ways to stop an older dog from biting due to age-related intolerance is to adhere to a predictable schedule for feeding, walks and napping, and allow surly seniors to downshift when necessary. Provide them with quiet spaces with comfortable beds and set up escape routes by using pet gates like the Carlson Pet Products Extra Wide Gate to keep children or other dogs away during quiet times.

Avoid startling a sleeping senior. Instead of touching the dog to wake them, speak to them to help them rouse, or if they’re suffering from hearing loss, tap the ground near their bed so that the vibration will wake them.

Acknowledge when a senior prefers not to be touched instead of forcing an interaction. And finally, try to gently encourage enrichment by providing meals from treat-stuffable toys like the KONG Wobbler Dog Toy.

Solutions for Dog Aggression Due to Canine Cognitive Dysfunction

Pet parents should first schedule a veterinary appointment to determine if their dog is suffering from CCD and rule out other illnesses. If diagnosed with CCD, there are nutraceuticals and supplements available that can help as well as a prescription drug called Anipryl that might slow the progression of CCD, according to Dr. Brooks. Dr. Brooks also finds that anti-anxiety medication can encourage restless dogs to sleep.

Supporting seniors as they cope with the progression of the illness is critical. Manage the dog’s household so that furniture and rugs remain in place to prevent confusion, and use baby or dog gates at the top and bottom of staircases to prevent accidental falls.

Because dogs suffering from dementia might have less predictable triggers for biting, try to recognize all of the factors that led to past bites and either manage interactions to prevent them from happening again, or use basic training to change the dog’s perception of the situation. For example, if a dog suddenly air snapped when a person walked near their dog bowl, toss treats to the dog when passing by so that the dog makes a positive association to people near their bowl.

Finally, refrain from punishing seniors for housetraining mistakes and lapses in basic training since the cognitive decline and related behaviors are out of the dog’s control.

Watching a beloved dog change as they age can be heartbreaking, particularly when the symptoms include biting. But the goal is to keep everyone in the household healthy and safe, from other dogs to children to pet parents. With veterinary support, pain management treatment if necessary, acknowledgement of your senior’s evolving likes and dislikes and an understanding that some of what is happening to your dog is related to the natural aging process, a senior dog with a tendency to bite should be able to mellow into a happier old soul.

By: Victoria Schade
Victoria Schade has been a dog trainer and writer for over seventeen years. Her dog duties have included working on Animal Planet’s Puppy Bowl as the lead animal wrangler, appearing on two seasons of the Animal Planet show Faithful Friends, creating dog training content and appearing in videos for a variety of sources, and writing two dog training books, "Bonding With Your Dog" and "Secrets of a Dog Trainer."

You can keep up with Victoria, Millie, the Smooth Brussels Griffon and Olive, the mixed breed dog, on her blog www.VictoriaSchade.com, on Twitter or on Instagram.