The Summit County Rescue Group is an all-volunteer mountain rescue team in Summit County, Colorado. While recent events might indicate otherwise, the group was originally created to rescue people, not animals. Then again, once in a while, when humans are hiking with dogs, the canine companions can get into trouble, too. And thus, SCRG springs into action—with a dog rescue mission!

“Like all mountain communities, we have a lot of dog owners and lovers on our team,” Summit County Rescue Group spokesman Charles Pitman says.

The group doesn’t have a specialized dog rescue unit. So, when people go out hiking with dogs and get in trouble, Pitman says SCRG puts out a call for four to six volunteers to join the rescue operation.

"We never have had a problem getting more members than we realistically need," Pitman says. "After all, who doesn’t want to help man’s best friend?"

One of the most common incidences are dogs getting injured while hiking with their owners.

"Most dog rescues we have done are for people taking their dogs on peaks that are very rocky, but not just any rocks—very sharp ones," Pitman says. "Poor Fluffy ends up with pads that are very damaged, and your heart goes out for the poor animal."

“Unfortunately, in a couple of instances, the hikers also had dogs,” Pitman says. “In those cases, two of our members climbed (meaning ropes, harnesses, helmets, rock protection) up with empty packs and placed the dogs in the packs, then rappelled down a cliff face with them. They then had to climb back up and bring down the two hikers. As you can imagine, the dog rescue portion added considerable time to an already very lengthy mission.”

This, however, wasn't the case with Roscoe, a 9-year old canine the group had to rescue from Ute Pass in July 2017. 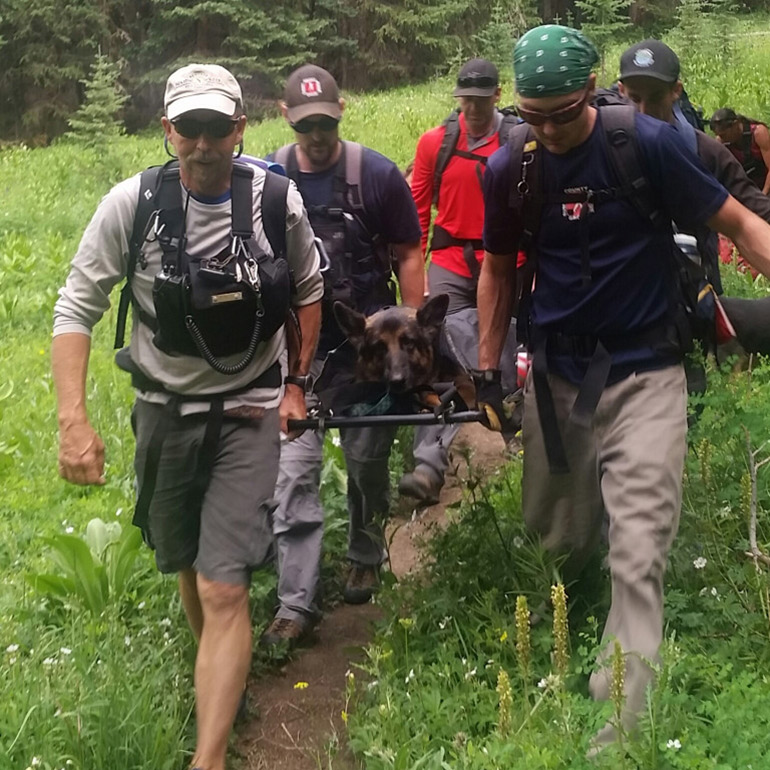 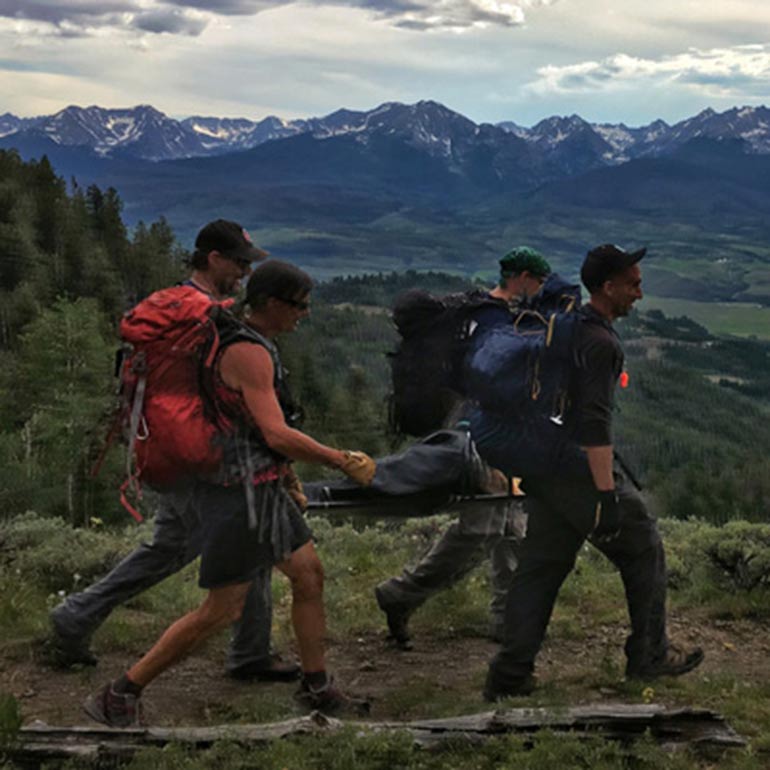 “He was a special case," Pitman says. “This was decidedly not a case of the owner taking the dog on a less than ‘mutt-friendly’ trail; rather, it was a very sick dog on an easy trail."

While hiking with his owner, Roscoe started showing signs of distress and could not keep going. Although cell phone service is unreliable on the trail, his owner, thankfully, managed to make a call after a few tries, and a rescue effort was organized to get the pup off the mountain and back into town.

The Ute Pass Trail is a particularly challenging route because of its elevation (a gain of 1,348 feet along the trail) and its length (over 6 miles roundtrip). Because the trail is marked as “moderate” in terms of intensity, many hiking dogs—especially those with a medical condition or those that are too young or well into their senior years—have trouble with it. Roscoe, however, wasn’t new to hiking and had braved harder trails before. If it weren’t for the emergency that morning, he probably would’ve managed the Ute Pass Trail just fine.

It took 3 hours and a 10-person rescue crew (who took turns carrying the pup on their shoulders) to bring Roscoe down from the mountain. After Roscoe's rescue, the team added a stretcher to their equipment so any future dogs needing rescue can be easily transported down the mountain that way.

"Some dogs are, as you can imagine, quite heavy," says Pitman, who adds that the stretcher will make a huge difference in the way the crew handle rescues for people hiking with dogs.

It was a good thing Roscoe’s owner immediately sought help, as the dog had to have emergency surgery to remove his spleen and untwist his stomach once he made it back to civilization. What made Roscoe's case unique was the fact that he had been showing no symptoms before the start of the hike, so his owner had no idea something was amiss. The good news in this pet story? Roscoe has made a full recovery and is back to hiking the trails with his owner.

By: Dana Bocco
Diana Bocco is a full-time writer and adventurer who has written for National Geographic, DiscoveryChannel.com, Yahoo! and Marie Claire. Diana has lived in five countries and taken her rescued dogs along to each one of them.  </em>