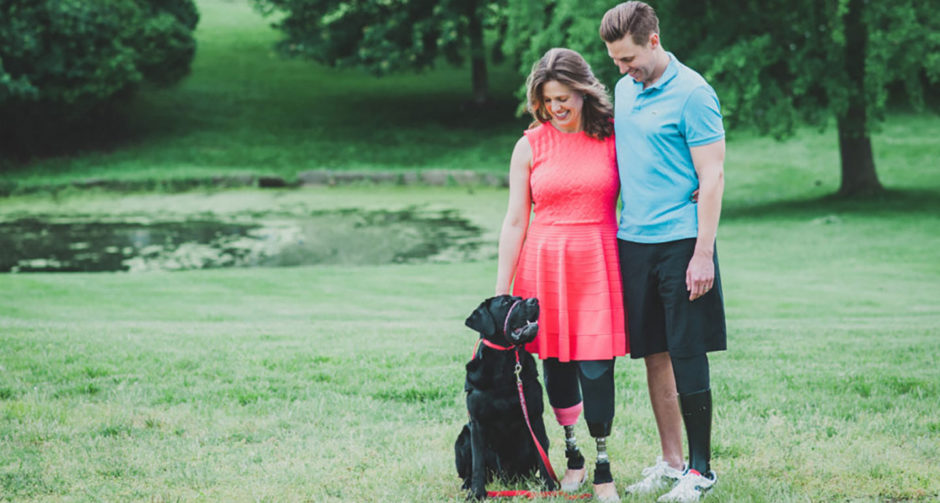 In September 2013, Jessica Kensky and her husband, Patrick Downes, welcomed Rescue, a black Labrador Retriever, into the family. Rescue immediately brought them lots of laughs with his goofy Lab antics. But the plucky pooch is so much more than just comic relief. He’s also Kensky’s highly-skilled service dog.

Kensky and Downes are both survivors of the Boston Marathon bombing, which killed three people and injured many others in the spring of 2013. The couple had, in a spur of the moment decision, gone to watch the annual race. Downes ended up having his left leg amputated. Kensky lost her right leg and later the left, too.

“We’d forgotten what it was like to laugh,” Downes says.

When they first met Rescue, he bounded right into the room and tried to wrangle food off the table. He had them cracking up.

“He immediately took our mind off of what had consumed us for so long,” Downes says.

The couple began posting photos of Rescue on Instagram to distract themselves from their long recovery process and relate to the outside world.

“Where did Rescue nap today? What silly thing did he do during PT?” Kensky says. “He just became our link to our old life in the normal world.”

Rescue came to Kensky and Downes from NEADS, a 501(c)3 nonprofit that provides highly skilled service dogs for people who are deaf or have a disability. Starting when he was about 8 weeks old, Rescue trained for 1 ½ years with NEADS/World Class Service Dogs, which is based in Princeton, Massachusetts. After puppies undergo personality tests, trainers work to desensitize them to unfamiliar noises and objects.

“When the puppies nap, they play sounds of thunder, so they’re not startled by loud noises,” Downes says.

Rescue then spent weekends with a civilian puppy raiser getting acclimated to new situations like concerts or the grocery store. On weekdays, he stayed with a handler at a prison, where he was known for flopping down on the prison’s concrete floors.

“He had to wear specially padded elbow pads so he wouldn’t do further damage to his elbows,” Downes says.

Before matching with Rescue, Kensky answered a litany of questions so NEADS could choose the right service dog for her.

“I couldn’t believe how much they wanted to know about me,” she says. “I felt like I was adopting a child!”

Among the many considerations was the dog’s height and weight.

“At the time I was a single amputee,” Kensky says, “so my height was a little more standardized when I was up and on a prosthetic. He’s a certain height and weight for me.”

Rescue’s height is less important now that Kensky’s height fluctuates depending on whether she’s using a power wheelchair or prosthetics.

In addition, NEADS dogs receive customized training specific to the needs of their humans. For example, trainers made sure Rescue was comfortable with the medical devices Kensky uses, including the power wheelchair and prosthetics.

Kensky also took a training class with two other women with upper-extremity issues who were getting dogs. These women got placed with dogs that were higher energy than Rescue, so they are able to help with tasks like putting letters in the mailbox or transferring laundry from the washer to the dryer. Since Kensky has full mobility in her arms, she can do those things for herself.

He can, however, bring her a blanket when she’s cold or curl up next to her when she needs comforting.

Rescue and the Couple Today

After several years of surgeries and rehabilitation at the Walter Reed National Military Medical Center in Bethesda, Maryland, Kensky and Downes returned to the Boston area. Kensky resumed working as a cancer nurse at Massachusetts General Hospital (MGH). Rescue accompanies her to work.

“I work with bone marrow transplant patients, so it’s a really tricky place to have him,” she says. “He stays in my manager’s office while I’m on the unit with patients to be respectful and conscious of any infectious disease concerns. He’s in her office which is glass, so he’s kind of become the unofficial mascot.”

Kensky has returned to school, pursuing a Master’s degree and perhaps a doctorate in nursing at the MGH Institute of Health Professions with Rescue at her side.

“He’ll start snoring or sigh, and it makes the whole class laugh,” she says. “He’s expressing how everyone else is feeling. Another time in class, a girl dropped a pretzel. He stared at the pretzel for an hour.”

Kensky and Rescue’s special bond garnered national media attention, and Rescue was named ASPCA Dog of the Year for 2017. He’s also the star of a picture book called “Rescue & Jessica: A Life-Changing Friendship,” which was released by Candlewick Press in April (the fifth anniversary of the Boston Marathon bombing).

Written by Kensky and Downes, the book features younger versions of the pair, but it doesn’t address the reason for the younger, fictionalized Jessica’s amputation.

“In a children’s book, you have 32 pages and very few words to say a lot, and we were not going to waste any of that talking about this tragic event,” Kensky says.

Instead, it tells parallel stories of Rescue and Jessica and how they come together in the face of adversity. The illustrations subtly nod to the marathon bombing with yellow and blue balloons and scenes of Boston landmarks.

“It’s formal way to engage kids in the conversation about what a service dog is and how he helps Jessica,” Downes says.

As the trio travels around the country sharing their story at schools, bookstores and other places, kids learn about disabilities and even get Rescue’s pawtograph. After all, Downes says, “he would do almost anything for a carrot.”