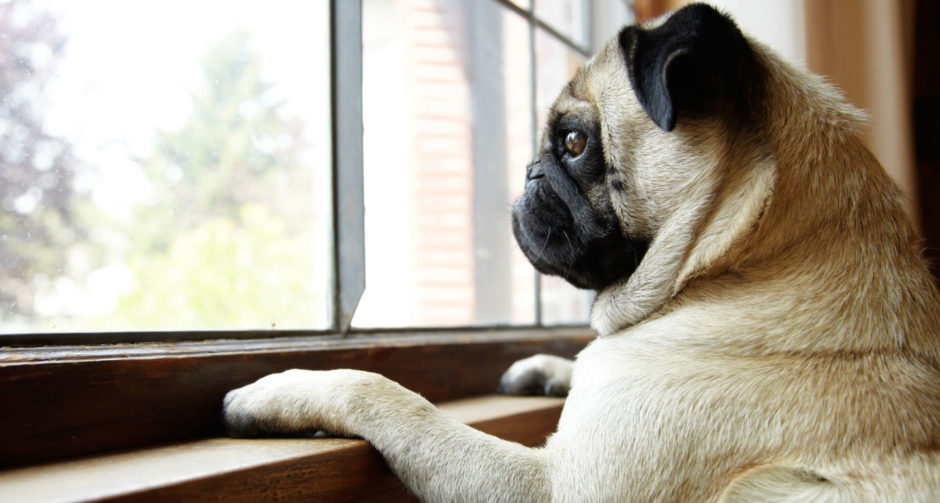 Mufasa, a 10-year-old mixed breed, finally found his forever home. While participating in the Nevada Humane Society's Walk for the Animals in Reno, the “very hairy male dog” was spotted by a woman who instantly fell in love, recalls Maia Finholm, the society’s former help desk manager. The problem, however, was that Mufasa showed the classic signs of separation anxiety in dogs.

“He was originally surrendered to us because of chewing, digging, getting into the trash and tearing things up in the house when his owner left the house,” Finholm says.

Willing to take on this big, furry challenge, Mufasa’s new owner worked with Finholm and the team at the Nevada Humane Society to correct the behaviors as they presented themselves.

Mufasa’s new mom also gave him lots of exercise and toys to keep him entertained, and put him on a very set schedule, Finholm says.

“They’re still happy together,” she says. “She still sends me pictures!”

Does your dog act out when you leave your home? Do you hear them barking and whining as you drive off for work? Your dog might be struggling with separation anxiety. The good news is, separation anxiety in dogs can be treated.

“Dogs in particular are quite likely to develop strong personal bonds with their frequent social partners—handlers, owners, ‘parents,’ etc.,” he says. “If these bonds become too strong or unhealthy, then the dog can experience extreme anxiety when that social partner is gone or leaves the home, for instance, for work. It is anxiety created by social separation.”

“They can range from barking and pacing to jumping out of a window,” she says. “These dogs have an extreme fear of abandonment.”

The Merck Veterinary Manual lists these physical and behavioral signs of distress that are seen in dogs with separation anxiety. Often, these manifest in the first 15 to 20 minutes of the owner’s departure, Dr. Ha says.

Why Dogs Get Separation Anxiety

Though experts can’t pinpoint exactly why dogs develop separation anxiety, they can identify situations that trigger the condition.

When moving in with a new family, an adopted shelter dog, for example, might act out when their new owner leaves for work, Dr. Goldman says.

“We often see this in dogs who have been adopted from shelters, so we believe that the abandonment or that abrupt change of social dynamics has a significant impact on a social animal, which dogs are,” Dr. Goldman says. “And so we find that animals who have been surrendered or abandoned in some way can develop separation anxiety when they’re in a new home, and the absence of the owner or the new owner triggers this panic of abandonment.”

Separation anxiety might also surface when a family member moves away or changes their schedule, Dr. Ha says.

“Often the problem arises when the owner has been at home a lot—either working from home or home on vacation, for example—and then suddenly returns to work or school, leaving the home for long periods,” he says. “You’re going from spending all day with him to being gone all day. That’s a big change.”

Even moving to a new home and being sequestered in a kennel can trigger separation anxiety in a puppy, Dr. Goldman says.

“Puppies will scream holy hell when they’re removed from their littermates, and then all of a sudden they’re in a home and isolated from the rest of the family, whether it’s for housetraining purposes, crate training them or whatever the rules of the home are,” she says. “That sometimes can create a stress. And when stress is related to being alone enough times, then being alone can trigger the stress.”

How to Help a Dog with Separation Anxiety

Before you begin treating a dog with separation anxiety, you should first rule out any medical problems, like arthritis pain or endocrine abnormalities, Dr. Ha says.

“Always have your dog thoroughly evaluated for medical issues first, especially if there’s a sudden onset of symptoms,” he says. “A change in a dog that’s 6, 7, 10 years old should be evaluated by a veterinarian who will take the behavioral issue seriously.”

Once you dog has been cleared by the veterinarian, you can begin working on dog separation anxiety solutions, beginning by slowly, gradually exposing the dog to short absences that aren’t related to stress, Dr. Goldman says.

“You’re teaching the dog, from the beginning, ‘I disappear but I come right back,’” she says. “‘I  exit the door, but I come right back.’ The dog starts to believe that even though you’re gone, you’re coming back. You have to create this new mental mindset to replace the one that currently exists.”

Gradual departure and slow conditioning are key, Dr. Ha says, along with figuring out when the dog starts to react and become anxious.

“He may be happy for 5 minutes, chewing on his KONG and lying in his bed,” he says. “But a few minutes later, he might start pacing and salivating.”

And that’s where the training to reduce anxiety begins, Dr. Ha says.

“But you need to make sure they actually engaged in this enrichment,” she says. “If a dog is too stressed out, they’ll totally ignore it and then resume eating [the food or treats stuffed in the toys] when the owner comes home.

“Instead, introduce the toy when the dog is experiencing very short periods of owner absence,” she continues. “Then you can gradually increase the time, increase the amount of food and increase the complexity of that enrichment toy.”

“You need to exercise your dog to set them up to be relaxed while they’re at home,” she says. “My recommendation is you set them up for success by giving them a very good exercise session to expend their reservoir of energy. And for young, healthy, strapping dogs, that’s a good 40 to 60 minutes in the morning.”

Other adjuncts to behavioral therapy to try include classical music and a calming vest like the ThunderShirt, Dr. Goldman says.

“They’ve been shown to reduce stress-related behavior in dogs,” she says. “But something like the vest has to be introduced properly so you can condition the dog to feel comfortable in it.”

A crate, however, is not recommended in dogs with separation anxiety.

“It depends on the dog, but some will shred the crate when they have extreme separation anxiety in an attempt to get to their owners,” Dr. Ha says. “And that can really injure them.”

In severe cases of dog separation anxiety, medication, says Dr. Goldman. But they should be used in conjunction with a behavior therapy plan.

“Clinical studies have shown that their efficacy is at their maximum when the anti-anxiety medication is administered in conjunction with behavior therapy,” she says.

Separation anxiety in dogs can be a frustrating issue—especially if your pal chews through your coffee table, tears through the garbage or rips apart your windowsill. Below, you can find answers to some of the most common questions about the topic.

Is there a cure for separation anxiety in dogs?

A: Yes, oftentimes there is a cure, or at least a workable solution—and they both involve a solid behavioral therapy plan, conditioning and a very patient owner, Dr. Ha says.

“In some cases, yes, separation anxiety in dog is curable,” he says. “For many cases, however, we cannot eliminate it, but we can reduce it to workable levels.”

He recommends owners talk to their veterinarian and work closely with a board-certified veterinary behaviorist to develop a game plan that involves training, anxiety management and, if necessary, anti-anxiety medications that are safe for dogs to use.

My dog has separation anxiety at night. Do you know why?

A: If the parents are there with the dog in the house, it’s likely not separation anxiety, but rather fear of the dark, Dr. Ha says.

“Trigger-stacking happens when a dog that’s a little anxious is exposed to something else that makes him anxious, and that causes him to panic,” he explains. “So, if an already-anxious dog has a fear of the dark, that could lead to nighttime anxiety, where he might pace, salivate and scratch at the owner’s bedroom door when it’s dark.”

If dog separation anxiety at night happens all of a sudden, he says, take your dog to the veterinarian for a checkup.

“It could be that he’s going blind,” Dr. Ha says. “Older dogs, especially, could develop nighttime fear as a result of a medical issue.”

What can I give my dog while he is anxious to help him calm down quickly?

“There are very quick-acting, short-term anti-anxiety medications that are very safe to use,” he says.