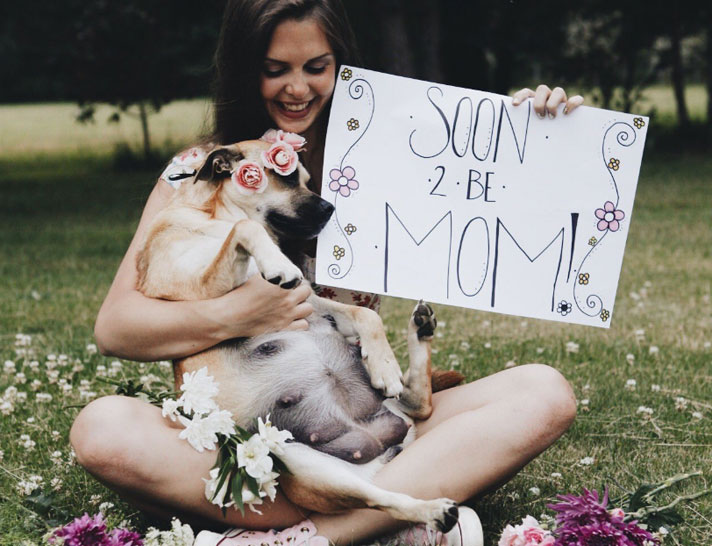 All soon-to-be-moms deserve to be celebrated for the life they are about to bring into the world. Even dogs. Elsa Veria-Means of Olympia, Washington, celebrated her very-pregnant dog by throwing her a beautiful maternity shoot.

In the adorable photos, Fusee, who was 8 weeks pregnant at the time of the shoot, sports a Coachella-esque flower crown and looks absolutely radiant. Veria-Means shared the photos, taken by Clayton Foshaug, on Twitter where they have garnered much attention.

“My bestfriend [sic] is 8 weeks pregnant so we decided to do a maternity photo shoot,” she tweeted along with the photos. Her post has been liked more than 192,000 times and retweeted more than 56,000 times.

My bestfriend is 8 weeks pregnant so we decided to do a maternity photo shoot ?? pic.twitter.com/MiFU23Font

Dog maternity photo shoots seem to be a growing trend. A Chihuahua recently got a maternity photo shoot inspired by Beyoncé. Last year, Brazilian photographer Ana Paula Grillo took a series of photos with her friend’s pregnant dog, Lilica, and the photos went viral. Grillo also did a newborn-style photo shoot after Lilica’s puppies were born. The latest story to go viral is that of a pregnant pit bull mama whose before-and-after maternity pics have taken Twitter by storm.

Congrats to the new mom!