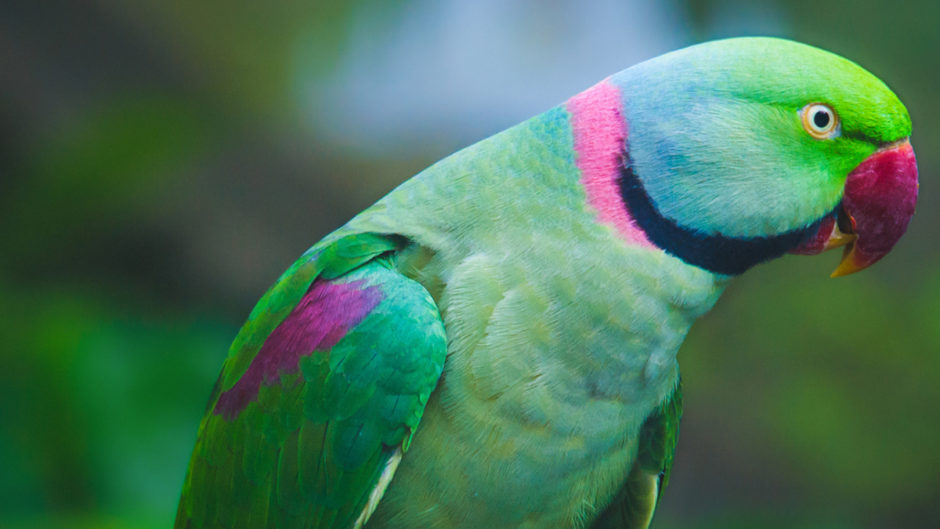 Something all bird owners surely know is that parrot beaks are powerful. But how powerful?

There are few reliable sources on this, but some people have estimated that a large macaw has the bite strength of 500 to 700 pounds per square inch, which is close to that of a large dog bite. Just watching a large macaw or cockatoo crush a Brazil nut, rip a 2-by-4 into shreds or break a weld on metal cage bars convinces most observers that a bird’s beak is powerful and not to be messed with.

Factors that Contribute to Bird Beak and Bite Power

Of course, the smaller the beak, the lighter the bite.

“It is the beak size — not the bird size — that counts,” said Gayle Soucek, a pet trade consultant in Illinois and author of Doves: A Complete Pet Owner’s Manual (Barron’s, February 2006).

For example, a cockatiel might weigh nearly the same as a Senegal, but the Senegal has a much larger beak and a much stronger bite.

That doesn’t completely mean a bite from a smaller beak cannot cause pain. In my experience, birds with smaller beaks tend to use them more precisely, with better aim. They seem to find the more narrow, tender places like the cuticles. In my experience, they will also more likely react by grinding the tissue without letting go rather than a bite and release.

The bird’s level of “bite inhibition” is also a factor.

“Some birds, such as hyacinth macaws, have extremely powerful biting power, but they are docile and will rarely bite at full strength, even when frightened,” Soucek said. “Other birds, such as hormonal Amazons, have next to no bite inhibition and will give it all they’ve got and aim for maximum damage.”

In his book “King Solomon’s Ring,” naturalist Konrad Lorenz discusses how animals with strong “weapons” tend to use them more gently and carefully with interactions with their own species, than the animals with less strong weapons. This may be the reason why birds with stronger beaks may use them more carefully, if that bird views humans as part of their social structure. If a bird truly felt that it was in danger (for example, it was trying to protect a nest site from an invader as with a hormonal parrot), it would be more likely to use every tool at its disposal to get away. It would use the beak power that it has.

It has been written that some parrots use their beaks differently even when it comes to gender. Female budgies, I have found, tend to bite harder, and this could be explained by their need to strong jaw muscles to prepare the nesting cavity more so than the males who are less ‘in charge’ of nest hole excavation and preparation.

Another factor is the biomechanics of the beak structure.

That is why a canary or toucan—both of which have narrow upper and lower beaks that occlude almost evenly—are not physically able to put as much pressure into their bites as an Amazon or macaw. This is not to say, however, that a softbill bird, such as a toucan, cannot inflict pain.

“Toucans are more than capable of breaking skin. They may not have the mechanical advantage that parrots have, but they do have very sharp, serrated beaks,” Nemetz said.

Parrots are thought to be related phylogenetically with raptors, which could explain why their beaks curve around in a hook and it is so geared to destruction of things in the environment. The hook bill is one of the most recognizable aspect of the parrot (“psittacine”) group.

Many cockatoos have a lower beak with two pointed tips on either side of the occlusive (contact) surface which seem to enhance the ability of the bird to rip and shred things. In my experience, cockatoo bites tend to be the most injurious and in fact, have led to stitches on occasion.

Some parrots have a beak with a longer, needle-like upper bill than others. Examples include slender billed cockatoos and to a minor degree, many blue crowned conures. These long needle-like projections can also enhance their biting ability to pierce through skin and to get deep into nuts.

Most if not all birds have some degree of movement of the upper bill in conjunction with the skull. In general, this effect is called cranial kinesis and in general; mammals do not have it. Our parrot species have one of the most advanced versions of this called prokinesis. This means that the upper bill moves via a joint between the maxilla bone and the rest of the skull. The lower bill, the mandible, is also connected with multiple joints with the bones of the skull. Due to this complex connection, it also moves more than just a “up and down” motion—it can make the lower beak edge (called the mandibular “tomia”) move side to side and from front to back. This extended mobility gives the parrot exquisite control in placement and pressure using the bill.

Of course, bones don’t move without muscles. There are strong muscles that are between the bills and the skull to move the different parts around. One of the most important group of muscles are those within and that control the fleshy, mobile parrot tongue. Many birds—including finches, canaries, mynahs, toucans and doves—have relatively small narrow tongues that have minimal movement other than front and back and a little bit of raise. Parrots have a much thicker, musculature tongue that has a certain degree of flexibility and almost prehensile aspect to it. Parrots can use their tongue to position what is being bitten in order to deliver the force to the optimal part.

One final aspect of bird beaks that can enhance the bird’s ability to use it precisely and strongly involves the sensitive nerves that they have in the beak. I find that many people don’t understand how sensitive their birds’ beaks are. There are nerves through the beak especially at the edges. They are called Herbst corpuscles and if you look at the edges of your bird’s beak carefully, you can see little spots in a row at the beak ends. These are the passageways of the nerves. This gives the bird sensation to know more about what they are touching with the beak, to understand the pressure points best to push on.

Helping Your Pet Bird Put His Beak to Work

Our parrots have a natural tendency to destruct many things in our environment. In order to help our pet birds exert their normal behavior, you have to give them many natural bird toys to destroy. There are a wide variety to choose from, with many textures, shapes, materials and colors.

A great part of understanding your parrot involves understanding how it uses its bill. Your bird learns about and manipulates much of its environment via the beak, in some ways similar to the way we use our fingertips and hands. Your parrot can sense the gentle touch of a beak massage or tear apart a large branch. Your parrot will never let you take this amazing structure for granted.