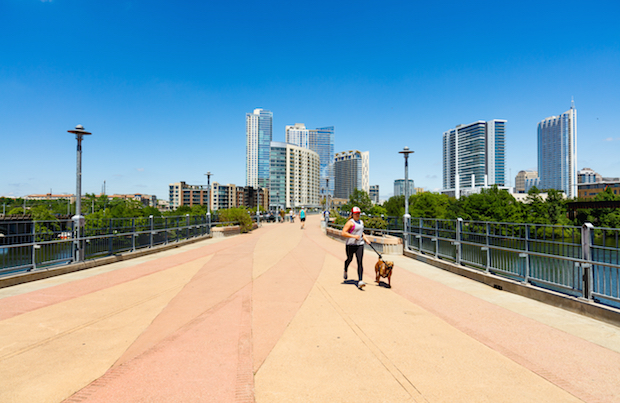 Whether you’re a Lone Star State local or thinking about visiting Texas for the first time, dog owners should know that many of its cities are very pet-friendly, with restaurants, shops, hotels and various other activities accommodating humans and canines alike.

It’s also a state full of dog parks, which can provide you and your dog with a great opportunity to get outside, enjoy some fresh air and time together and let your dog cut loose.

Amy Burkert, owner of GoPetFriendly.com, says the most important thing when considering taking your dog to an off-leash dog park is to know your dog’s personality. “Some dogs don’t like other dogs,” she says. “You need to closely observe him in this environment to know if he’s having fun and when he’s had enough.”

Burkert also recommends that first-timers visit a dog park either early or late in the day, when parks aren’t as crowded, for a less overwhelming experience. If you’re ready to try a dog park, or if you already know they’re for you and your dog, here are some of the most unique, spacious and enjoyable ones in the great state of Texas: Burkert, who calls Austin her winter home, believes it’s one of the most pet-friendly cities in the entire country. On the dog park front, her favorite is Zilker Metropolitan Park. “Dog park,” in this case, is actually a bit of a misnomer because Zilker is a regular city park – and a huge one at that, approximately 350 acres right in the middle of Austin.

“When you put a fence around a dog park, it sort of constrains activity and can amp up the boisterousness and rambunctiousness in the dogs,” Burkert says. “You don’t have that with Zilker because it’s open, so dogs there feel free to roam and interact comfortably with soccer players, volleyball players, walkers and other dogs.”

Of course, because Zilker isn’t fenced in, it’s extra important to keep an eye on what’s going on around you and your dog.

Another great Austin dog park is Auditorium Shores. “If your dog loves to go swimming, this is right on Ladybird Lake, easily accessible from downtown Austin. It’s a little dog beach with little steps into the water,” Burkert says. Again, be careful to keep a close eye on your dog here, as not only is there no fence around the park, there’s also a bike path that cuts through it.

Norwood is the best fenced-in dog park in Austin, Burkert says. The feeling of claustrophobia present at many dog parks is absent here. At two acres, it’s plenty spacious, and it separates large dogs and small ones into different sections of the park, so you don’t have to worry about your Chihuahua getting feisty with a Great Dane. Approximately 200 miles to the north of Austin is Dallas, or the “Big D.” It’s a city that’s already well-known as a hub for industry and innovation, but Lauren Farruya, a certified travel associate for the Dallas Convention & Visitors Bureau, notes that Dallas has also established itself as one of the most popular visitor destinations in Texas – for humans and dogs alike.

It’s hard to walk down a Dallas block without bumping into a pet-friendly hotel, restaurant, shop, or park, but for some outdoor fun with your dog, start at Deep Ellum Bark Park. It’s located right in downtown, just a hop, skip and a jump from the city’s other best pet-friendly facilities. And the urban setting is unique from just about every other park on this list (it’s not easy to find more than an acre of open space in the middle of a major city where your dog can roam off leash safely).

Also in the shadow of the city’s skyline is the beautiful 5.2-acre Klyde Warren Park. There’s a ton to do here for humans – including sports, food trucks, table games and a butterfly garden – and dogs are welcome throughout the park on a dog leash. There’s also a special fenced-in section where you can take your dog off leash and let him cool down by running through fountains with his four-legged friends (and if it’s especially hot, maybe you’ll want to join him).

For a more unique dog park experience, check out Mutts Cantina at the corner of CityPlace West and Oak Grove Ave. It’s a dog-friendly restaurant with an attached dog park, so you can sit outside and eat with your pup or pay for a day pass (or year membership if you’re local) to the park and leave your dog with an attendant while you enjoy a meal and a cocktail. The most populous city in the state, Houston, lies just off the shores of the Gulf of Mexico. As such, it’s a major player in the energy industry, as well as home to NASA’s Johnson Space Center and a number of wonderful dog parks.

The Millie Bush Bark Park is 13 acres wide, full of shade and packed with small ponds for your dog to enjoy. Meanwhile, the Bill Archer Bark Park is slightly larger at 20 acres, similarly shaded, and with more than enough activities for your dog, including a larger pond for swimming.

For a slight change of pace, check out the Discovery Green – a 12-acre park right in downtown Houston that offers dedicated fenced-in space for both large and small dogs. It’s also filled with interesting exhibits, delicious food and plenty of games and sports for you to explore and take in with your (leashed) dog. Remember the Alamo, and don’t forget about San Antonio on your next Texas trip. It’s second only to Houston in terms of size, and it’s the home of the famous Riverwalk – designed more for humans than dogs, though the latter are welcome to roam the five-mile-long walk on leash with their owners.

In terms of more traditional dog parks, Michelle Martinez of the San Antonio Parks and Recreation Department says Phil Hardberger Park is one of the most popular. The 311-acre park has two separate off-leash areas for dogs – one on either side of the park. They’re both full of obstacle courses and other pieces of exercise equipment, and the dog area on the west side of the has a two-story dog house for pups to play in and get some shade on hotter days.

San Antonio’s other most beloved dog park, according to Martinez, is the McAllister Dog Park. The dedicated doggie facilities have all the amenities of Phil Hardberger and others, but the primary appeal for McAllister are the connected hiking trails for you and your dog to enjoy together. West Texas is a lot of desert, but the city of El Paso still ranks among the state’s largest. If dry and desolate is your speed, check out the Pebble Hills Dog Park. Shade is tough to come by, but space certainly isn’t – the park is three acres. It’s also full of obstacle courses and other similar activities to keep your dog entertained if you need to rest and hydrate in the Texas heat, something you should make sure your dog does with regularity.

On the other side of the state is the town of Port Aransas, just off the Gulf Coast and immediately east of Corpus Christi. The Port Aransas Dog Park is a beautiful 29,000 square-foot area with shaded facilities and accessible water for your dog. It also contains separate areas for large and small animals.

Further south along the coast, closer to Mexico, is South Padre Island. Dogs are allowed on the island’s beautiful beaches, but leashes are required.