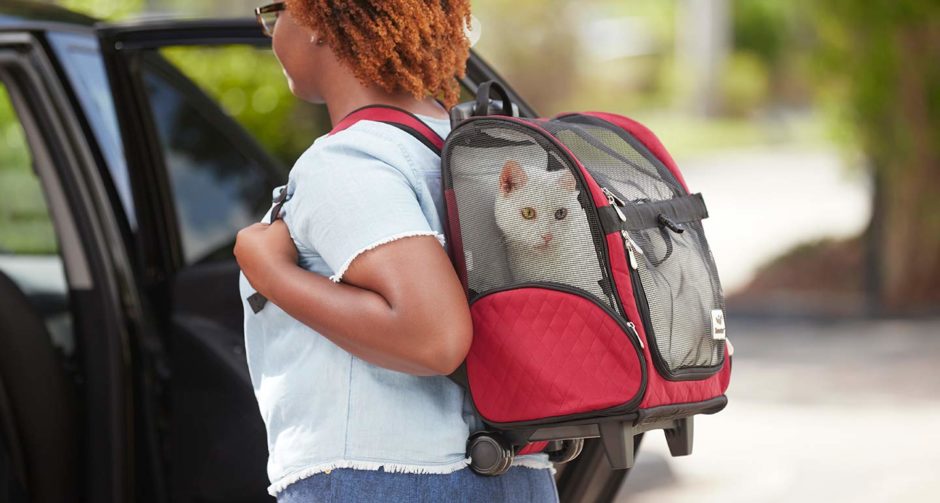 Want to know how to travel with a cat? Ask Jennie Lane. The certified animal behaviorist and owner of Synergy Animal Behavior in Germantown, Tennessee, has traveled with as many as seven cats at one time—and lived to tell the tale.

While many may believe that cats generally make terrible travel companions, it can be done. The key to successful cat travel, according to Lane, RVT, ACAAB, is to start when your cat is young so they acclimate to traveling.

“If they’re raised with travel from an early age, they can learn to love the experience,” she says.

Be aware, though, that not all cats will learn to love traveling, especially extended trips. Alice Moon-Fanelli, Ph.D., CAAB, certified animal behaviorist and owner of Animal Behavior Consultations LLC in Hartford, Connecticut, recommends leaving cats behind in many cases.

“Most cats are not good vacation travel candidates,” she says. “The majority of cats prefer to remain at home.”

But what if your cat is no longer a kitten, and you still need to hit the road for vet office visits, among other reasons? Or maybe you’re looking to try traveling with your cat for the first time? Before embarking on any trip with a cat, it is a good idea to check with a veterinarian and discuss whether the cat is prepared “physically and mentally for the planned excursion,” Lane says.

After you’ve determined that your cat is ready to ride, follow these tips to make traveling with a cat as stress-free as possible.

How to Travel With a Cat in a Car

Although your feline friend may disagree, and loudly, car travel is often the best option for a cat. Experts generally agree that the most important thing when traveling with a cat in a car is that they be kept in a proper pet carrier.

“The first thing to consider is how you are going to restrain your pet,” say Suzanne Hetts, Ph.D., and Daniel Estep, Ph.D., CAABs with Animal Behavior Associates Inc. in Sun City, Arizona.

That’s because pets can be highly distracting to drivers, and many cats have a particular affinity for climbing under a driver’s feet. But according to a July 2011 American Automobile Association and Kurgo survey, although 83 percent of drivers understand the potential danger of the distraction of a pet in a car, only 16 percent restrain their pets.

Vets generally recommend pet carriers large enough to allow the cat to stand and reposition itself.

“Put your cat in a large sturdy carrier that they can stand up in, stretch, and turn around easily,” advises the All Feline Hospital website. The Snoozer Pet Products Roll Around 4-in-1 Travel Dog & Cat Carrier measures up to 23x15.5x12.25 inches, holding cats up to 21 pounds, and comes with wheels to roll your precious pet along beside you. The MidWest Skudo Deluxe Plastic Pet Carrier is more of a classic design, made of sturdy plastic and a metal grate door that locks with the push of a button.

It is also best to keep the pet carrier in the back seat of the car, advises AAA. If an airbag deploys while your pet is in the passenger seat (even in a crate), it might injure your pet.

Because cats don’t often tolerate change as well as other pets, experts like Dr. Moon-Fanelli recommend acclimating the cat to their carrier by including treats or catnip and comfy blankets and toys. Pet parents can also take their cat on short trips to get them used to traveling. Dr. Moon-Fanelli says she would take her cat out for ice cream to associate the carrier with good memories.

Get more tips on teaching your cat to be comfortable in their carrier.

It is also important to plan stops to let cats stretch their legs and relieve themselves, and make sure all doors and windows are closed if you let the cat out of their carrier while stopped, AAA advises. Also be sure the cat is in the carrier, or in a snug cat harness and leash, such as the PetSafe Come With Me Kitty Harness, when you exit the vehicle.

Traveling With Cats on a Plane

Cats are becoming a more common sight on airplanes, although many experts recommend air travel only after other options have been eliminated.

More than 2 million live animals fly in the United States each year, according to the U.S. Department of Transportation (DOT), including more than 424,000 pets. Federal guidelines require service animals and psychiatric or emotional support animals to be allowed in-cabin on planes and fly for free under provisions in the Air Carrier Access Act.

Cats can also fly as pets for a fee in-cabin or as cargo on most major domestic carriers. Each airline sets its own criteria for the pets in regard to size. Generally, they must fit inside a pet carrier stowed under a seat and must remain there. Fees generally range from $75 to $125 for in-cabin pets and cargo rates vary. Southwest, Allegiant, Frontier, Jet Blue and Spirit airlines do not allow animals as cargo.

Many experts recommend against traveling with a pet as cargo, particularly cats. They say pet crates are often roughly handled, noises are loud and temperatures can fluctuate greatly during transport.

“I don’t know there’s a lot an owner can do to prepare a pet for that level of ‘over-stimulation assault,” Dr. Moon-Fanelli says.

Air travel can be particularly dangerous for brachycephalic animals, or those with "pushed in" faces, such as Persian, Himalayan and exotic shorthair cats. Because of their short nasal passages, they are particularly susceptible to changes in temperature and heatstroke as well as other environmental hazards. Due to these risks, some airlines, including United, limit the breeds of cats they allow as cargo.

Although airlines cannot limit the number of service or support animals on a flight, they often limit the number of pets allowed. If you plan to pay to bring along your cat as a pet, book early and give yourself plenty of time to check in at the airport.

Some airports impose limitations and restrictions beyond those of the airlines, so it is important to talk with your travel provider about those. For example, certain airports do not allow pet travel between certain dates when cargo temperatures may climb too high or low. Before you book, ask questions and research to reduce the potential for headaches en route.

No matter how you plan to bring your cat on a plane, be sure to provide clear identification on your cat and carrier in case of mishap or escape by the cat. If you are traveling with your cat in a carry-on, you’ll need to go through security while holding your pet; a harness and leash can also come in handy here.

How to Travel With a Cat on a Train

Amtrak launched a program to allow service dogs on its trains in 2016 and has since expanded to allow pet cats and dogs. Service animals are allowed on any train and can accompany the owner throughout the train, and they travel for free. Reservations should be made by calling 1-800-USA-RAIL (1-800-872-7245) in advance.

Cats, however, are generally considered “comfort animals” by the carrier and are subject to carry-on rules if they are not trained for a specific task.

The fee for carry-on pets is $26 each way for trips up to 7 hours. Before boarding, cat parents must fill out a Pet Release and Indemnification Agreement and should allow extra time at the station to review the document. One pet per passenger is allowed in coach class only. Pets must weigh 20 pounds or less, including the carrier which can be no more than 19-by-14-by-10.5 inches, and must be stowed under your seat. Carriers must be leakproof and waterproof with adequate ventilation.

Passengers can disembark with the pet at stops, when time permits, but should inform the conductor that they’re leaving and remain in proximity to the train, according to Amtrak.

Many metro, regional and tourist trains and subways across the country allow small pets to ride as long as they are leashed and muzzled or in carriers. Some train stations will require service animals to wear some sort of identifying vest or special identification to indicate their status.

In most cases, no proof of vaccination, health certificate, or any other paperwork is required, according to Million Mile Secrets’ train travel guide, which includes pet policies on more than 40 train carriers.

Cats may not be as popular as dogs are when it comes to four-legged travel companions, but they just may surprise you. Dr. Moon-Fanelli and Skylar became close travel buddies as she relocated often between school and jobs in her early career.

“He made many new friends, even changed the perspective of a few former ‘cat haters,’” she says. “He was a special cat.”