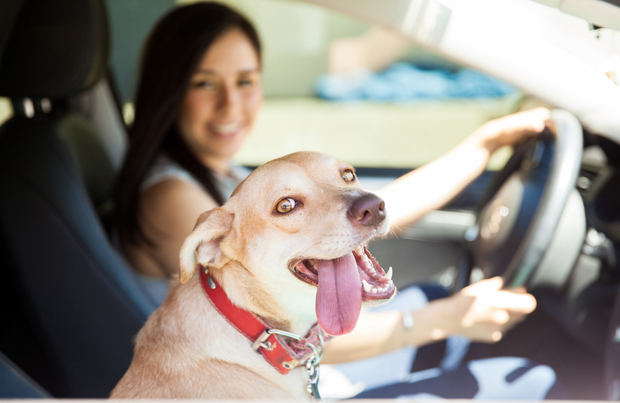 Jared Wadley takes his five-year-old Collie, Legend, to visit kids and veterans each week as a therapy dog in Ypsilanti Township, Michigan. When he first brought Legend home, the dog was content riding in the back Wadley’s SUV. But within a short time, Legend was inching dangerously closer to the front of the car. Wadley used to use his right arm to physically prevent the dog from nudging his way into the front seat.

“About a year ago, I installed a mesh dog car barrier in the back area, but he squeezed between the mesh and side of the backseat,” he says. Wadley would pull the car over and put Legend in the back, but within a minute of driving off, the dog would jump back up front.

Pets riding loosely in your vehicle can be a distraction by barking, pacing or even jumping in your lap. Some drivers pet their pup while driving or let them hang their head out the driver’s side window while standing on top of them. Unfortunately, none of these scenarios will do much for your driving. In fact, they can be dangerous. According to Nationwide Insurance, 65 percent of drivers are distracted by their dogs.

“Pets can be a dangerous, if not deadly distraction, while operating a vehicle,” says Ron Schmedly, president of DefensiveDriving.org. “We strongly recommend securing your furry friends when they travel in the car.”

How Distracted Are You?

Jordan Perch, lead researcher at DMV.com, says the AAA has found driving with pets to be just as distracting as texting or talking on the phone while behind the wheel. They found that drivers even take their hands off the wheel to prevent their pet from getting in the front seat, yet only a handful of states have passed legislation making it a ticketable offense to have an unrestrained pet in a moving vehicle or ride with a pet on your lap.

Pauline Paquin’s two-year-old Great Dane, Napoleon, is well behaved now, but when he was a puppy he always wanted to ride on Paquin’s lap while driving. “I tried giving him a nice pillow, toys—nothing would work,” she says. According to Nationwide Insurance, 65 percent of drivers are distracted by their dogs.

Some dogs need the security of being restrained or may benefit from anti-anxiety medication or sedation for trips. Talk to your vet if your pet is particularly problematic in the car.

Fortunately, there are a number pet-restraint systems available to pet owners (most feature a padded vest and side straps that connect a dog harness to a car’s LATCH system) that restrict your pet’s movement and preventing them from jumping around.

Restraint systems also protect pets from being thrown from the back seat in a crash or a sudden stop, which can be deadly. “Unrestrained pets essentially become projectiles in a collision, exerting an extraordinary amount of force on anyone or anything they hit,” says Perch.

Pet booster seats and tether systems may be also work well. Do your research and find out the safety grade of devices and travel crates before your purchase them, says Diane Purcell of Diane’s Pet Sitting Services in Mcleansville, North Carolina. She adds that dogs should never be tethered to a restraint system by his dog collar.

“Should a driver have an accident, a dog tethered by a collar will be choked and can end up with a crushed trachea or whiplash,” says Purcell.

For smaller dogs and cats, the best option for restraint may be a crate. Cats can be every bit as distracting as dogs if they pace, cry and jump on you while you’re driving. Crates should be placed on the back seat floor or secured with a seatbelt to ensure it can’t fall and injure your pet.

Jennifer Nelson is a Florida-based writer who writes pet health, behavior and lifestyle stories. Her Cocker Spaniel has the window view.