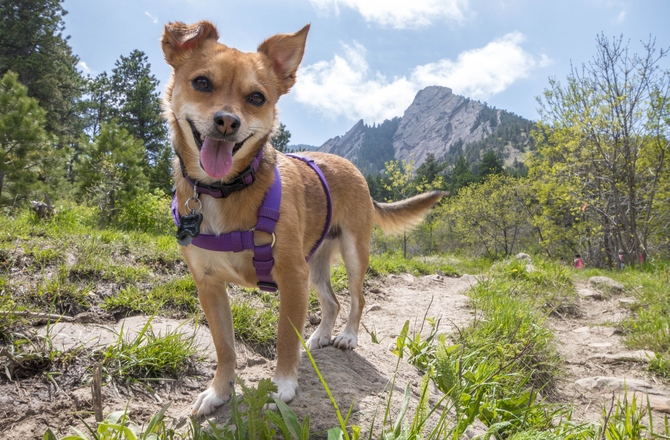 If walking around the block has gotten old, why not head to a trail to switch up your routine? Chances are that your dog will love exploring a new area, and you’ll both appreciate the gorgeous scenery. From Maine’s Acadia National Park to a cliffside Hawaiian lighthouse hike, discover these dog-friendly hiking trails around the country.

Although many of the country’s national parks do not allow dogs, the Grand Canyon in northern Arizona does. However, there are some restrictions pet owners should be aware of: pets are not allowed on any inner canyon trails (so you can’t descend into the canyon with your dog) or on shuttle buses. For panoramic views of the Grand Canyon’s famed rocks, Vanessa Ceja-Cervantes, the centennial program coordinator in the park’s Public Affairs Office recommends the South Rim’s 13-mile Rim Trail.

“This trail provides various panoramic views of the canyon and many opportunities for pet selfies and photographs,” says Ceja-Cervantes. “The Rim Trail also has a number of rest areas, water stations and historic sites to visit.”

She also recommends the trail to Shoshone point overlook [roughly 3.5 miles from the Rim Trail] as another great option for leashed pets. “This rarely visited two-mile round-trip dirt trail is soft on the paws and takes you through stunning ponderosa pine forest which opens up to an amazing view of Grand Canyon,” she says.

Entrance to Grand Canyon National Park costs $30 per vehicle and $15 per person.

Open seasonally from May to October, Northern Maine’s Acadia National Park features scenery that the state is known for: lush forests, coastline, and naturally, the occasional lighthouse. Best of all? Acadia National Park is another one of the few national parks in the country that welcomes dogs.

“Dogs are allowed on most of the 130 miles of hiking trails in the park as long as they are kept on a six-foot leash at all times,” says John T. Kelly, management assistant at Acadia National Park. “They are not permitted on hiking trails that have iron ladders, which are needed for climbing at certain points along the trails.”

The park has 45 miles of car-free carriage roads (16-foot wide gravel paths used by walkers, bikers and equestrians), Kelly says. The carriage roads provide the best opportunity for dog walkers to experience the beauty of Acadia.

If you decide to hike the carriage roads, expect to see old stone bridges, lush forests and maybe even water. Leave your vehicle in a parking lot and wander around the historic roads. The park asks that you pick up after your dog and not allow your pooch to swim in Acadia’s lakes or ponds. Admission for one private vehicle costs $25 and is valid for seven days.

“The Gatlinburg Trail is one of only two trails in Great Smoky Mountains National Park where visitors are permitted to walk their pets,” says Molly Schroer, a park spokesperson.

“The two-mile trail has a few small hills, but mostly runs level along the West Prong of the Little Pigeon River. The trail is a great destination for pet owners to view foundations and chimneys of several old home sites while enjoying the beautiful and lush scenery of the river and forest.”

The trail begins at the Sugarlands Visitor Center and ends at the outskirts of the city of Gatlinburg, Tennessee. The trail, for the most part, follows a river. If you visit during the fall, expect to see the colorful fall foliage the park is renowned for. Another perk? Entrance to the Great Smoky Mountain National Park is free.

“If you are in the Portland area and you want a dog friendly hike with incredible views of Mount Hood, look no further than Tom, Dick and Harry Mountain,” says Bryce LaDuc, an ambassador for the lifestyle brand Camping With Dogs who often hits the trail with her two rescue dogs.

The 6.2-mile trail starts at the Mirror Lake trailhead off of Highway 26, then follows a switchback trail to picturesque Mirror Lake, she says. A destination in and of itself, Mirror Lake perfectly reflects Mount Hood (the tallest mountain in Oregon) on a clear day. Admire the peak as you take in views of Oregon’s lush forests from the top.

“The trail rises moderately from the lake with multiple sections with views of Mount Hood,” says LaDuc. “From the summit, Mount Hood steals the show, however, there are 360-degree views of the surrounding mountains.”

Fidler says one of the most popular trails is Garden of the Gods observational trail, due to its great views of the surrounding forests and gray cliffs and sandstone that are about 320 million years old. The trail leading up the view point is 0.4 miles, perfect if you want a quick jaunt. You can also pause to read about the geological formations as your dog sniffs the ground. Entrance to Shawnee National Forest is free. The park is open from dawn until dusk.

The Washington Trail Association’s first sentence about the Heather-Maple Pass is “If ever there was a hike to satisfy all a hiker’s desires, this one comes as close as any.” Expect to see wildflowers in the spring, gold-leafed trees in the fall, and the first dustings of winter snow before the road to highway closes for the winter season.

“The main draw is you get to experience North Cascades National park with a dog,” says Jessica Rhae Williams, a Seattle-based blogger who regularly hikes with her two Dachshunds, Gretel and Chester.

Dogs must be kept on dog leashs. If you’ve got extra time, you also can hike 0.6 miles to Lake Ann.

Todd Trail No. 34 near Sunriver, Oregon

Another one of Williams’ favorite trials in the Pacific Northwest? The Todd Trail No. 34 near Sunriver, Oregon, about an hour from Bend, Oregon, in the central part of the state. Consider hiking from the Todd Trail to Soda Creek Trail turnoff where you can take in green trees, wildflowers, and mountain views of Broken Top.

“The trail is very open,” says Williams, who describes the trail as feeling like a “rolling amble” most of time with a moderate climb sprinkled in for good measure and great for those who appreciate stunning scenery. Her own dogs took time to cool off in the streams in the area.

Dogs on the trail need to be leashed at all times, unless they are swimming. The Todd Trail is located in the Deschutes National Forest. Admission per car generally costs $5 per day.

Hawaii is teeming with dog-friendly trails. The Hawaiian Humane Society even has a group of pet owners that meets monthly to hit the trails. One of the Society’s favorite hikes? The Makapu’u Trail in Waimanalo, Hawaii, which is roughly 40 minutes by car from Honolulu. Hikers and their leashed dogs can expect a two mile round trip hike that comes complete with sweeping views of O’ahu’s southeastern coastline and a red-roofed lighthouse circa 1902.

“Makapu’u is a great hike for beginners. The trail is paved from beginning to end and has amazing views of the Pacific Ocean,” says Suzy Tam,communications and community events manager for the Hawaiian Humane Society. “If you visit the hike from December through May, you may even catch glimpses of humpback whales breaching.”

Mullally also recommends checking out nearby Mammoth Lakes since the town is very dog friendly. Many of the area’s hotels, cabins and restaurants welcome dogs. Crystal Lake is part of the Sierra National Forest, and admission will cost around $5 per day.

At 7.2 miles roundtrip, summiting Southern California’s Bernardo Mountain (about a 30-minute drive from San Diego) would be quite the, ahem, hike. But Mullally says it’s worth it for the views.

“It’s a moderate hike for a fit dog,” says Mullally. “It crosses a nice little creek with palm trees for shade before a gradual climb to the summit for views and snacks.”

From the summit, you can look forward to expansive views of blue Lake Hodges and the surrounding mountains. To reach the trailhead, take the I-15 to the Via Rancho Parkway exit, then turn right on Sunset Drive and follow the road until it ends at the parking lot. The trail will start out beside the Interstate and will eventually lead you to the mountain top. Admission is free.

Mullally recommends heading out in the morning to be the Southern California heat. She also suggests always carrying lots of water for pooch, especially if it’s hot out.