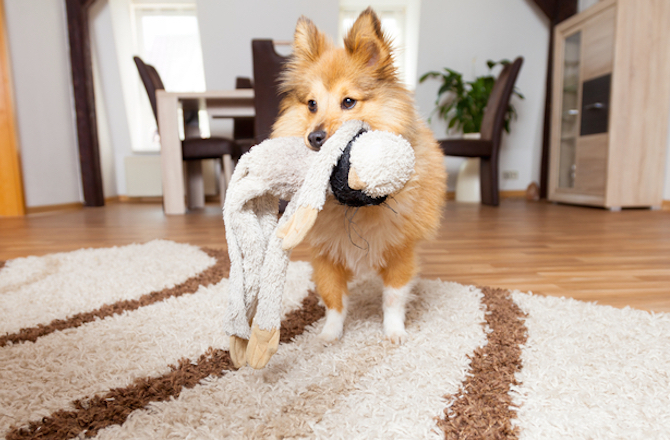 You’ve got a new puppy that never slows down, and nothing you offer him seems to hold his interest for long. Does that mean your puppy is “just not that into” toys? That’s doubtful, as puppies love to play. More likely it’s because you haven’t offered him the right kinds of toys.

The dog toy market has grown to rival the human toy equivalent (and some dog toys could even pass for kids’ toys), so pet parents have an overwhelming number of options. That said, some are better than others. So what types of toys are guaranteed to engage, entertain and bewitch your furry best friend? Here are five winners:

Buying a few plush toys just because they’re cute is fine – we all do it. However, the best plush toys are more than just a pretty face; they give your puppy something to do. These “plush with a purpose” toys have a variety of ways for your puppy to stay busy. Some have soft rings that your puppy can pull off, some have woodland critters hiding inside of a plush base, and some have Velcro parts that can be pulled off with a satisfying riiiip noise. Interactive plush toys that your pup can easily grab onto, and that make a variety of noises (like squeaks, honks and crinkles) are sure to keep your pup entertained.

Every new puppy household needs at least a half dozen of this type of baby-sitter toy. These hard rubber toys can be stuffed with delicious goodies, like a portion of your puppy’s meal ration, treats or peanut butter, and are a great way to keep your puppy captivated for an extended period, whether he’s in the crate or out. They come in a variety of sizes, shapes and levels of complexity, but because puppies can get easily frustrated, it’s best to start off with toys that deliver a quick payout. After you pup has figured out how to unpack the goodies you can move on to the more challenging anchor toy options.

“Anchor” busy toys and “activity” busy toys are similar in that they’re both treat-stuffable, but there’s one major difference: the activity type requires movement to get the goodies out. That means that your puppy must push, roll and paw the toy to get paid, which also means that he’ll need plenty of space to play with it. Because of that, they’re not a great fit for crate time and they’re best used when you’re supervising your puppy outside of his crate. The beauty of this type of toy is that it burns mental energy as your pup figures out how to unpack the treats, as well as a little physical energy as he moves it around for the payout.

Teething season comes on strong, and it helps to have toys that can weather the force of those tiny but terrible teeth while soothe your pup’s arching gums at the same time. Most anchor busy toys can do double duty as chilly toys that help keep him engaged while taking the edge off the discomfort. Simply fill the toy with peanut butter or chicken broth, freeze it and let your pup chomp away. It helps to keep several in frozen reserve so you’re always ready for a teething emergency.

Toy on a String

This DIY hybrid-toy might seem like something your cat would prefer, but it’s a little-known fact that puppies (and adult dogs) love to chase plush toys on a string. And as an added bonus, this hack can transform a plush toy that your puppy thinks is “meh” into something that he can’t get enough of!

Simply take one of your puppy’s smaller soft toys, attach a string to it that’s about four-to-five feet long and let the chasing fun begin. It’s best to introduce the toy gradually; let your puppy track it as you slowly drag it past him, then once he figures out what to do with it, make the toy move faster. The toy on a string should always remain on the floor during the game, because dangling it in the air encourages jumping, and puppies should always keep four paws on the floor to prevent a jumping up habit from developing. Don’t forget to let your puppy catch and kill it now and then to keep the game fun!