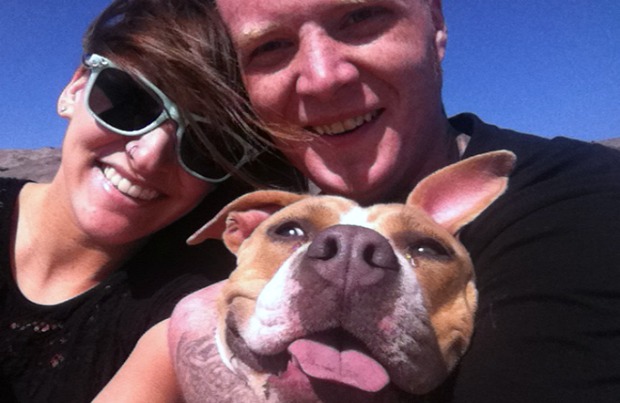 Mocha came into Crystal Ignatowski’s life in the most unexpected and heartbreaking way.

It was late August 2013 when Crystal first met the six-month-old Pit Bull mix. Her future boyfriend, Brandon, had gone camping with a group of friends. One of the men brought a dog along on the trip. “This ‘friend’ was treating Mocha horribly: kicking her, screaming at her, just mistreating her really bad,” Crystal says.

When Brandon asked about it, Mocha’s owner responded that he was just going to tie her to a tree and leave her. “Sure enough, that’s what he did,” Crystal explains. “Brandon found Mocha tied to a tree at the end of the camping trip. She was left abandoned. So Brandon rescued Mocha and brought her home.”

While Mocha was not physically unhealthy when Brandon took her in, she had a lot of emotional scars. “She was truly emotionally damaged,” Crystal says. “You could tell because she wouldn’t leave Brandon’s side. He was her hero and she was loyal to him.”

In addition to anxiety, Mocha was easily upset and hurt. “If Mocha was whiney and Brandon told her to be quiet, she would cower and go hide under the bed or some other piece of furniture,” Crystal remembers. “She would hide for hours.” Initially, Mocha’s behaviors proved difficult to adjust to for her newly adopted family.

Brandon did most of the training with Mocha early on. “He was the pack-leader, and I chose to be the overwhelmed girlfriend,” Crystal remembers. “But Brandon and Mocha came as a package deal, so when Brandon and I started dating, I got them both.”

Crystal points that Mocha formed an incredible bond with Brandon. “She listened to Brandon, she learned to sit; if Brandon said ‘stay’, she stayed,” she says. But that bond with Crystal wasn’t as immediate. “With me, you could see it in her eyes that the wheels in her head were still spinning,” she says. In fact, Crystal even had to buy a special padded leash for walking Mocha to prevent the excitable and anxious dog from “ripping her arm off.”

In August 2014, life changed forever for Crystal and Mocha. “[Brandon] passed away from a heroin addiction,” she says. “When we first started dating that tail-end of summer, he was clean, but he started using again in the winter of our relationship.”

Although he entered a treatment facility and excelled there, Brandon eventually relapsed when he got home one weekend. “He overdosed and died,” Crystal says. “He fought his demons for a long time.”

Brandon’s death took a heavy toll on Mocha. “I was the one to find Brandon’s body, and Mocha was curled up next to him in the bathroom,” Crystal says. “She was extremely distraught, to say the least—we both were.”

At the time of Brandon’s death, he and Crystal had been looking for a place to start over after he graduated from the program—a new home in a new town, away from everything. “After Brandon passed away, obviously, plans changed,” Crystal says. “I decided I was going to stay in Salem because I just experienced something extremely traumatic, and moving to a new place with no network and no support system did not seem like a smart plan.” So Crystal started to search for apartments close to home—except this time she was looking for a place for Mocha as well. “How could I not take Mocha in?” says Crystal. “There was no choice in the matter—her and I were bound by Brandon.”

The New Road to Healing

The adjustment period was difficult for everybody. “I wanted Mocha’s love so bad. I wanted her to love me like she loved Brandon, like she looked up to Brandon,” says Crystal. “This did not happen fast.“

For many months, Mocha was depressed. She had a hard time eating and playing with her dog toys. “I would walk in the door and she would hardly open her eyes at me,” Crystal remembers. “Her body language just screamed ‘I miss Brandon.’”

To heal, Crystal took Mocha out on long adventures—on hikes and long drives in the car to scenic places. “My favorite thing we did together was visit this park in the outskirts of town called Joryville,” Crystal says. “There is a wooden bench at the top of the hill, and Mocha and I would walk to the top and I would sit on the bench and she would breeze through the pasture.” This was when Mocha was happy—when they were on adventures. “It’s hard to explain, but it was great, seeing her so carefree, seeing her run so fast through the long, tall grass.”

Together, they struggled through the winter, and then spring came and Crystal began taking Mocha to dog training classes. “During this time, I became the pack-leader,” she says. “Mocha began to trust me more. She wanted to please me, and I loved seeing her excited to please.” When Mocha graduated her course, Crystal says she was the happiest person in the world. “Brandon’s parents brought me flowers and we took ‘graduation photos’ at the training facility,” Crystal adds.

Mocha and Crystal have been together since the end of September 2014. “It doesn’t seem like a lot of time, but a lot has happened to both of us since then,” Crystal says. “We have a bond that can never be broken.”

And while Crystal says Mocha will always be a reminder of Brandon and what they both lost, the loveable dog has also been a huge part of the healing process. “If I didn’t have Mocha, I don’t know where I would be,” Crystal says. “She became my rock at the most pivotal time in my life—she still is my rock today. She is just everything someone would want in a dog.”