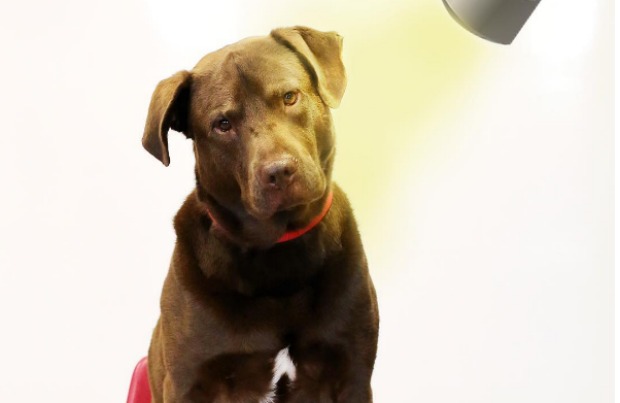 It was a shocking mystery case that captured the fascination of Instagram users across the nation: what happened to Hank the shelter dog’s beloved fuzzy purple hippo?

In early July, a 4-year-old Labrador named Hank and his trusty companion arrived at the Fox Valley Humane Society (FVHS) in Appleton, Wisconsin. The adorable duo were such an inseparable pair that the shelter staff urged potential pet parents to adopt them together.

Then, the unthinkable happened: Fuzzy Purple Hippo was found chewed to shreds in Hank’s kennel!

The stunning turn of events was brought to the attention of Rebecca Reppert-Klich, the creative coordinator and photographer for FVHS, who decided to turn it into a nail-biting (and, okay, totally hilarious and adorable) Instagram saga.

Reppert-Klich documented all of the drama for rapt followers, from Fuzzy Purple Hippo’s urgent visit to staff vet Dr. Laura Nelson for emergency surgery to Hank’s line of questioning with the authorities regarding the crime in question (don’t worry, he had a lawyer present).

The stakes got even higher when Chief Thomas of the Appleton Police Department, along with the help of Blue (the department’s therapy dog in-training), visited the shelter to examine all the evidence and, eventually, hold a press conference declaring Hank’s innocence in the matter.

Reppert-Klich, who came up with the clever idea to report on Hank and Fuzzy Purple Hippo’s story, tells PawCulture that she had a lot of fun with the project and that she was touched by how much shelter staff and those in the community (including Chief Thomas) were willing to play along.

Amy Christensen, the FVHS volunteer and communications coordinator, says that because their work environment can often be a difficult one, the mystery was just what the staff needed.

“We can have tough days here,” she says, “so this was a welcome activity.”

Not only did those involved in the viral sensation have a great time with it, it was a hit for everyone following along online.

Reppert-Klich says she’s gotten positive responses from people far and wide who have not only thanked her for putting such a delightful thing on the internet but who have also donated money to the shelter.

Perhaps the best thing to come out of this creative endeavor, however, was that the exposure helped get FVHS animals adopted, including Hank and his recovering friend Fuzzy Purple Hippo.

Since their headline-grabbing adventure, the two have been welcomed into a loving forever home with their new family. At last, a deserving and happy ending to a “Dateline”-worthy tale.