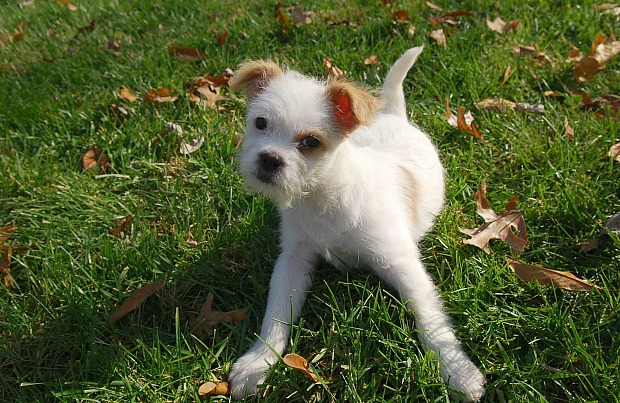 By the time I brought Olive home, I’d been a dog trainer for over 13 years. I’d worked with every type of dog in every possible scenario, from brand new puppies to grizzled seniors. I’d parented a very challenging dog, our boxer Sumner, who came to us at a year old after having spent the majority of his young life in a crate in a basement. His intense leash reactivity gave me empathy for my clients facing similar challenges and helped me to understand just how heartbreaking it can be to live with a loving dog who also happens to be afraid of the world and who hid his fear behind ferocious barks and bared teeth. After rehabbing our dear, troubled Sumner, I felt like I was owed an easy dog or two.

Eight-week old Olive was to be my clean slate dog, a scruffy, white mixed-breed rescue puppy that I wanted to make – how embarrassing to admit – perfect. She was joining our resident dog, Millie, a Brussels Griffon we adopted when she was six months old. Millie was a stellar student and I was excited to add adorable Olive to our household. I was going to do everything right with her, and she was going to be a shining example of my abilities as a trainer.

Olive had other ideas.

I noticed her first quirk when our two dogs were playing in the yard. Millie was doing her Millie thing (checking out where the neighbor cat had caroused the night before) and Olive was a few feet behind her … stalking her. We didn’t know exactly what Olive was, but nothing in her conformation suggested a herding breed. I watched her repeat the behavior several times, tracking Millie with an eye that could stop a herd of sheep. The behavior was intense and didn’t seem particularly playful, though they were able to play normally together at other times. Who was this strange little puppy?

The quirks continued. Despite knowing nearly every trick in the book to help puppies feel comfortable in their crates, nothing I did could convince Olive that the crate was anything but a death chamber. She hated it, and let us know for the first three nights so volubly that I was sure my neighbors could hear her through shut windows. The crate exercises that I did with her during the day didn’t help either. She despised it, was not having it, and told me in every possible way that I could take that crate and shove it. And how about potty training? This puppyhood rite of passage was my forte, and I knew how to make it work no matter how challenging the case. But not with Olive. Without the benefit of a crate I was on hyper-vigilant, nonstop potty duty, with Olive tethered to me on a leash during our waking hours. Our house was a maze of baby gates, flattened cardboard boxes blocking staircases and old fireplace grates designed to keep Olive’s world small and help me try to stay sane. Despite these safeguards, we both made mistakes. Potty training took months and months and months—an embarrassingly long time for someone who was supposed to have all the answers.

Then, I ran head-first into her body handling sensitivities. I tried to wipe her paws off after a rainy trip to the yard and she growled at me. And not just a, “Ooh, what’s going on?” type of growl, a “Don’t you ever do that to me again, woman!” type of growl. I assessed the range of her discomfort and discovered that all four feet, her tail and her back legs were no-fly zones. My adorable, clean-slate puppy had come to me with a very well-defined list of likes and dislikes that caught me off guard. Nature seemed to be kicking nurture’s ass.

Did I get frustrated as Olive’s challenges added up? Yes. Did I cry? Tons. Did I yell? Yup. I’m ashamed to admit that sometimes frustration got the best of me, and even though I had always prided myself on being an even-tempered, science-based, dog-friendly trainer, I succumbed to my irritation. I kept saying to my husband, sometimes though tears, that what we were dealing with wasn’t normal. Nothing was working and I was failing miserably as a trainer.

But was something truly off about our cute little puppy, or was it me?

Time passed. We finally mastered potty training. We figured out our sleeping arrangement. We worked through her body handling issues and roughed out a semblance of basic obedience training. But the quirks kept coming.

The crate exercises that I did with her during the day didn’t help either. She despised it, was not having it, and told me in every possible way that I could take that crate and shove it.

When Olive needed to go outside, she would not only scratch the one and only door we used for going to the yard, she also scratched on a door two rooms away, even if we weren’t near that room. She walks to other doors to scratch to go out even if the main door is wide open. She wades belly-deep into streams to urinate and defecate (try cleaning that up). She never solicits petting, and doesn’t seem to care if we pet her or not.

She only recently, at six years old, started wagging her tail to show happiness or excitement. It’s still surprising when she gives us an appropriate wag. There are more strange behaviors (oh so many more), but to go on feels like overkill. Suffice it to say that Olive still makes me question what I know about dogs as well as my abilities as a trainer with embarrassing frequency.

Despite all of her oddities and challenges, my husband and I agree that we have never had a dog as affectionate as Olive. No one loves more fiercely or cuddles more exceptionally. She is happiest when her people are sitting so that she can perch on top of us, perfectly positioned so that she can gaze up into our eyes with a loving expression straight out of a Disney movie.

When she cozies up in bed with us she becomes liquid, filling in the crevices behind our knees, or fusing her spine to ours, or placing her head in the crook of a neck (we call these “premium snugs”). She radiates enough heat from her belly that my father-in-law considers a cuddle from Olive therapy for his arthritic hands. Olive even smothers her sister with love, wrapping her body around Millie’s whether she wants to be snuggled or not. She loves everyone, and is thrilled to rest upon or next to any being that will have her.

We now know that our odd little Olive was meant to find us. Dog trainers say “you get the dog you deserve,” which can be interpreted in a few different ways.

Maybe I had become too cocky in my abilities and Olive was sent to me to teach me that I still have much to learn. Maybe my empathy for clients with difficult dogs was waning. Maybe Olive was sent to me to prove that, despite our best efforts, things don’t always turn out the way we hoped and that’s still okay. Or maybe Olive came to our little family to show us that “perfect” is a construct with little basis in reality, and “work in progress with a side of snuggle” can be awesome too.