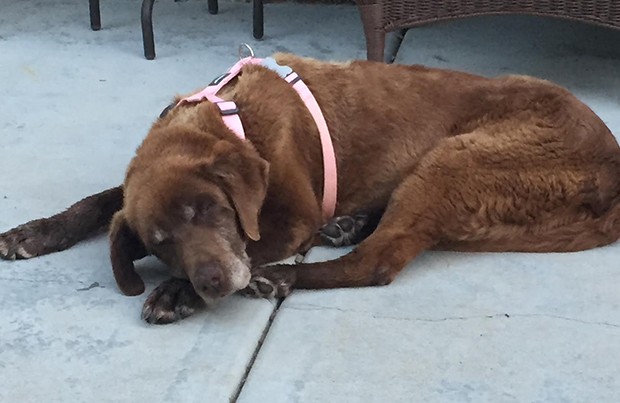 Darwin Cameron will never forget the September 2016 day when Mo, his Chesapeake Bay Retriever, disappeared during a camping trip in rural Idaho.

Mo, then 13 years old, had been camping plenty of times before and usually stayed close to her humans. But that day, she panicked when she couldn’t immediately see Darwin and took off into the woods to find him.

Her disappearance marked the beginning of a long, painful ordeal for Darwin and his wife, Cindy, who had gotten Mo as an 8-week-old puppy. The Camerons began a desperate search for their senior girl, posting her information online and getting help from a network of local animal rescuers.

But as winter progressed, they began to despair. They could no longer access the mountains because of the heavy snowfall, and reported sightings of Mo had mostly dried up.

Still, Darwin had a gut feeling that, against all odds, Mo was still out there.

As winter moved into spring, the Camerons, who live in Boise, continued to search and spread the word about Mo. A few people contacted the couple over the months with possible leads, but these turned out to be false alarms, only adding to their emotionally exhausting ordeal.

So in June, when the Camerons heard about a local animal rescue volunteer who thought she might have Mo, they were initially wary.

Cheri Glankler had taken in a senior Chesapeake Bay Retriever after a nearby rancher found the pup collapsed, dehydrated and dangerously thin on his property.

“She was skin and bones. She was covered in ticks and fleas,” Glankler says.

It was clear the dog had been roughing it in the wild for some time. Her coat was a mess, she could hardly walk and she had scars across her back. Right away, Glankler suspected the dog might be Mo. She looked very different from the well-groomed family pet in the pictures the Camerons had been posting, but Glankler knew that was to be expected.

“Whenever a dog goes missing for a long period of time, they’re not going to look like the dog that you lost,” she says.

Glankler asked Cameron if he wanted his brother to come take a look at the dog first to spare the couple yet another painful let-down, but Cameron said he and his wife would make the drive themselves.

“[Darwin] said, ‘No, I’m a big boy, I’ve been upset since September when she went missing,’” Glankler says. “‘My wife and I need to come ourselves and see her.’”

The Camerons felt apprehensive as they approached Glankler’s home on the afternoon of June 28. Would they finally be reunited with Mo, or would this be another frustrating false alarm?

Glankler also felt anxious, and she observed the dog closely as the Camerons stepped inside. As soon as the couple walked in, the pup’s demeanor noticeably changed.

“I was watching her, and I thought I felt a relaxation on her part,” Glankler says.

Cindy sat down on the floor and the dog went straight to her, snuggling her head into her stomach. Then the pup went over to Darwin and sat down on his feet. That was another encouraging sign, because Mo had always liked to sit on people’s feet.

Still, the Camerons were nervous because the dog looked so different from the family pet they remembered.

The dog was certainly acting a lot like Mo, though, so they decided to put her to another test. They brought out the big, fluffy bed that Mo had always slept in. Immediately, the pup got very excited.

“[Mo] turned around after she pushed her head into the bed and then went back to Cindy and Cindy had tears in her eyes,” Glankler says. “And at that point, it was tears for all. And I looked at Cindy and I go, ‘I think you have your girl back.’”

Mo, now 14, had survived an incredible nine months alone in the Idaho wilderness, toughing it out through the harshest winter the region had seen in a century. The Camerons will never know exactly what Mo went through, but do know she struggled with starvation and thirst, and the scars on her back suggest she had run-ins with wild animals like coyotes or wolves.

Mo is getting stronger every day, but she is still dealing with the aftermath of her traumatic experience.

“She still has some panic attacks from time to time,” Darwin says. “She’ll wake up, she’ll go to sleep at our feet [but if] she wakes up and is the room alone and kind of panics. But she’s doing remarkably well considering what she went through, and her age.”

Glankler was so inspired by Mo’s survival story that she recently launched a new dog and cat rescue group in Mo’s honor called Legends of the Paws.

“The ‘legends’ comes from Mo because she’ll always be remembered,” Glankler says.

Meanwhile, as Mo continues to recover, the Camerons are grateful every day to have their beloved pup back.

Images via: Darwin and Cindy Cameron

Lindsay Lowe is a freelance writer based in Boulder, Colorado. She also writes online for Parade magazine, TODAY.com, Men’s Health, and other publications.