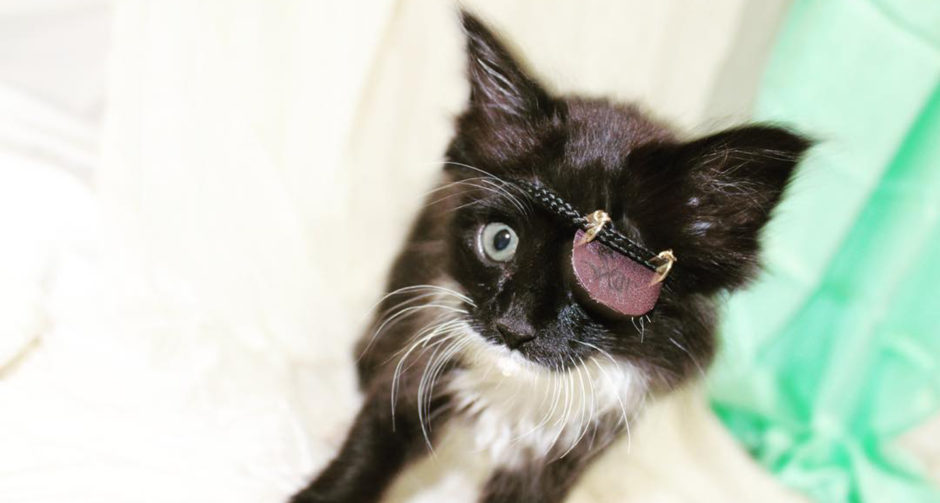 Meet Scar, the kitten sporting a cat eye patch and an inspiring story: When Savannah Aras, a Northern California-based marine biologist and zoologist, heard that a litter of infant kittens needed help, she and her best friend made the nearly three-hour drive to meet them.

One of the kittens was born with a potentially fatal infection in his eyes, so Aras knew, even before meeting him, that she’d have to take him home. “There was no way I was going let him suffer and die,” she says.

With that, Aras adopted the kitten, named him Scar, and took him to the veterinarian the very next day for the care he so desperately needed. Because Scar’s eye infection was so close to his brain, he needed to have his eye removed to have a chance of survival. At 2 weeks old and weighing just 8.5 ounces, however, this was a risky maneuver.

“The doctor would not be able to hook him up to monitors, fit a breathing tube down his throat, or know how the anesthesia was affecting him during the procedure,” Aras says. “This made it an extremely high-risk surgery.”

With a 50 percent chance survival rate, Aras and the veterinarians took their chances on the small but mighty Scar.

The life-saving gamble paid off. Not only did Scar make it through the operation, the surgery took care of both his infected eye and removed the infection in the surrounding areas. From there, Aras took him home, bottle fed him every two hours and began her life as cat mama to one brave feline.

By just 8-weeks-old, Scar had made a full recovery and transformed into a healthy, happy kitten.

“He's the most loving, rambunctious, adventurous, little kitten I've ever met,” she says.

Scar’s adventurous nature has captured the hearts of fans on his Instagram page, as has his teeny-tiny, but totally badass, cat eye patch.

Aras came up with the idea for a cat eye patch after Scar’s surgery when she realized she needed a way to keep his stitches clean and protected from curious kitty paws. When Aras mentioned the idea to a colleague, he made one for the cat, and it was a perfect match.

“He never tried to take it off and still doesn't to this day,” Aras says of Scar and his now famous eye patch.

Because Scar likes his eye patch so much, Aras keeps it on him whenever they go on their outdoor adventures together, which includes hiking and playing on the beach.

While Aras has only known Scar for a short while, the spirited kitten already changed her life completely and has taught Aras an important lesson. “The amount love and energy you put into an animal is what you get out of it,” she says.

She hopes that the love and freedom she gives Scar will inspire others to help animals that need a little extra love and care.

“My advice for anyone looking to adopt an animal in need like Scar is to do it,” she says. “It is the most rewarding act you could ever do. You are not only saving a life, but gaining a lifetime friend.”

By: Aly Semigran
Aly Semigran is a lifestyle writer for the world, and roommate of Ruby, the cutest dog in the world.