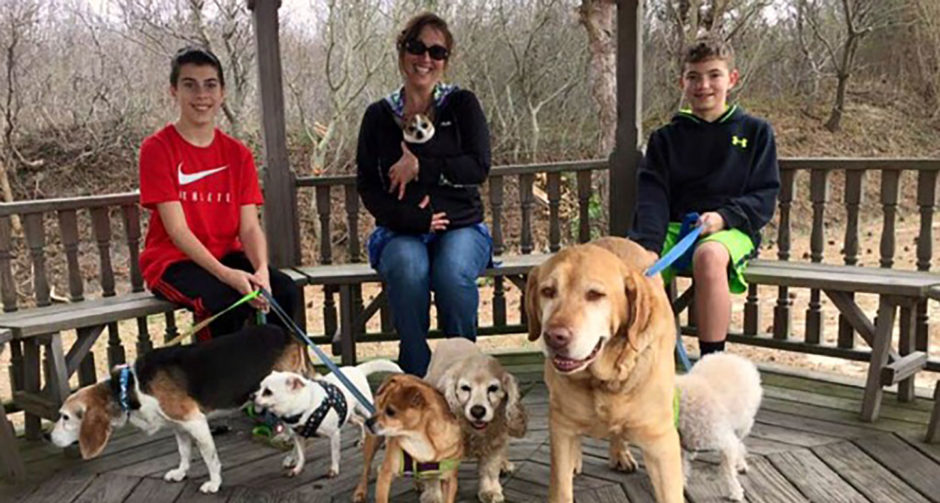 When it comes to dog adoption, almost everyone loves puppies—they’re cute, funny, and usually have long lives ahead of them. Some prospective pet parents seek out young, house-trained canine companions, who don’t require as much training but are still spry and healthy. But how many people are clamoring for an older dog who is slowing down?

Apparently not all that many, which is why a number of animal rescues specializing in helping old dogs have cropped up across the country. Maybe it’s understandable why pet owners aren’t lining up to adopt an older dog. You know your time together will likely be shorter, and older dogs need more TLC and more veterinary care. Still, no animal lover would dispute that older dogs are just as deserving of our love as younger dogs, and that senior dogs can return as much affection and love as a younger dog.

So the next time you’re looking for a furry best friend, you might want to look toward a rescue that specializes in finding homes for older dogs. Here are a few that are doing amazing things for senior pets.

Their story: Michele Allen and her husband, Jeff, had been fostering dogs for several years and were always drawn to the dogs who had health issues or special needs. Eventually, in the way that many rescues begin, they realized that rescuing dogs was their calling. They started a dog hospice and sanctuary called the Monkey’s House. They adopt many dogs out or place them with foster parents, but the others who are near the end of their lives remain at the Monkey’s House.

“The amount of homeless dogs needing loving and responsible end of life care is overwhelming. These dogs are in every state, every breed, and every size,” Michele says.

Most of the dogs who come to Allen are dying. “Our job is to fix what we can, to help them feel as best as possible and to make sure their life counts—they are no longer disposable,” Allen says.

It might sound like every day at the Monkey’s House would be a sad one, but according to Allen, “This is an incredibly uplifting and peaceful place.”

The dogs who make it to the Monkey’s House clearly have a guardian angel looking out for them. For instance, Fifi, a poodle mix, came to the Monkey’s House “semiconscious from an infection in her blood, dehydration, and uncontrolled diabetes. No dog should be dumped by their family in that condition,” Allen says.

She turned her downstairs bathroom into a mini ICU, checking Fifi’s blood sugar frequently, gave her IV antibiotics and continuous fluids to battle dehydration, and held the dog in her arms almost continually for five days while volunteers cared for the other dogs. Fifi’s infected teeth have been removed and she receives insulin twice a day, but is otherwise doing very well.

“We have learned from every dog that has come through our doors,” Allen says.

Their story: Shereen Raucci started Izzy’s Place Senior Dog Rescue with her husband, Paul, in October of 2010. They had been foster pet parents with several other rescue organizations, and were inspired by one of their senior dog fosters, Isabella, AKA Izzy. “I was volunteering at Best Friends Sanctuary in Utah and quickly fell in love with Izzy,” says Raucci. “She was so shy it took three hours of me sitting in her yard, reading a book out loud, for her to finally come close enough for me to pet her.”

Raucci was approved to adopt Izzy, and they traveled back to Colorado. But it wasn’t long before Izzy was diagnosed with cancer on her upper jaw.

“It was inoperable,” Raucci says. “She enjoyed another 18 wonderful months, sharing love, touching hearts, and spreading the word of how wonderful seniors are. Izzy’s legacy has gone on, saving over 60 other abandoned senior dogs.”

But Izzy’s Place almost ended shortly after it began. In June 2012, Paul was killed in a traffic jeep accident.

Raucci thought she would have to dissolve the rescue, but the volunteers were insistent that it continue. Raucci moved (with eight “less adoptable” senior dogs) to upstate New York in 2012 to be with family, where she still lives, and she oversees the rescue from a distance, which means dogs like Charlie, a Weimaraner-mix, get a second chance.

Charlie, Raucci says, came to them “emaciated and heartworm positive.” Maybe 9 or 10 years old, Charlie had to endure heartworm treatment, which is not an easy thing for a dog, Raucci says.

“They must be crated and kept very quiet for about three months or the dead worms could travel to the heart, causing death. Keeping Charlie quiet was quite a challenge as he was a vibrant, energetic dog, but his foster mom did a great job keeping him quiet but entertained,” she says.

After three months, Charlie was re-tested and still was heartworm positive, which meant continuing the treatment. But finally on his third test, he tested negative for heartworm and was able to be adopted out.

“He shares his home with a senior Weimaraner brother named Isaac, two human siblings, and mom and dad. They enjoy walks, trips to the dog parks and lazy evenings on the deck. We couldn’t be happier for Charlie and his family,” Raucci says.

Their story: Hildi Korse and her boyfriend, Greg Singer, started their nonprofit in 2013. They have approximately 40 dogs in foster families and they’re currently fostering seven dogs, the maximum their county allows.

Korse says that she and Singer were inspired to start Bluegrass Senior Dog Rescue after they found themselves in the habit of rescuing older dogs. By their fifth rescue, Korse says, “We said to each other, ‘We need to get organized and start a rescue. We can’t afford to support this ourselves.’”

Korse says that while they specialize in senior dogs, there is no dog that they’ll turn away. They once even accepted a box of puppies.

“But the most typical scenario is that you’ll take in a dog that’s been starved and is full of parasites, and nobody knows why he’s on his own,” Korse says. “All the dogs have a story, and I wish I knew them. The best thing we can do is give them a happily ever after.”

And even the oldest dogs can have a happy ending. Korse says that last year she was fostering a 20-year-old Shih Tzu named Ronnie, who Korse describes as looking like “a decrepit, little old man.” She didn’t even list him on the website as a foster, assuming he would live out his days at the Bluegrass Senior Dog Rescue.

“Twenty year old dogs aren’t highly sought after,” she says. She figured Ronnie would stay with her for the rest of his life.

But someone got wind of Ronnie, and Korse says an elderly woman adopted him last November. Recently, Singer wondered how we was doing, and so Korse encouraged him to call and find out.