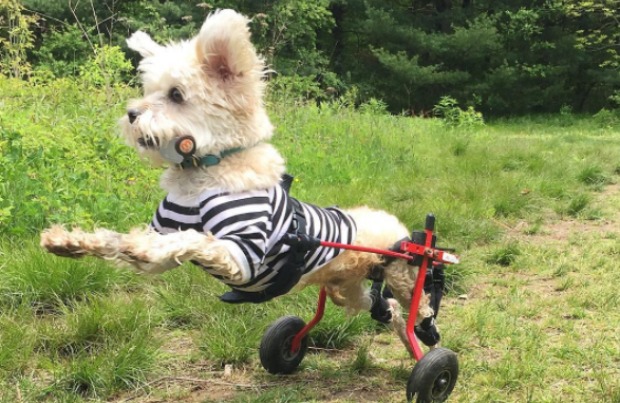 Jill Lawson wasn’t looking for a dog when she came across Albert’s rescue profile. A lifelong animal lover, she was simply helping a friend who wanted to rescue, and yet the little pup’s goofy grin stuck with her long after they scrolled past his photo.

“Something made me fill out the application that night,” she remembers.

If you’re one of Albert’s 86,000-and-counting Instagram followers, you probably understand this love-at-first-sight reaction. Albert, you see, isn’t your average dog. Found in a ditch on the side of the road in Arkansas, he was paralyzed from his hips down after likely being hit by a car.

His story could have tragically ended there, but in fact, little Albert was just getting started. Soon, the former stray was zooming around the local shelter with a set of donated doggie wheels, winning hearts and capturing the attention of The Little Pink Shelter, a New England-based rescue that relocates at-risk dogs in the South and places them with families like Lawson’s up North.

“We wondered if he would ever find a home,” says Little Pink Shelter founder Holly Chasin. “His dreams and ours for him have been surpassed a million times over.”

It didn’t take long for Albert to settle in with the Lawsons in Fairfield, Connecticut. Although this was their first experience with a special-needs pet, Albert quickly proved that he was just like any other dog. Already a high-speed, all-terrain pro with his dog wheelchair, he approached new challenges with a puppy-like enthusiasm.

“We have to change his diapers and lift him into the car and up the stairs, but those are the only things that make him different,” says Lawson. “He doesn’t know he has any challenges because they are all taken care of by us.”

While Shih Tzu-Poodle mixes aren’t necessarily known for being outdoorsmen, Albert, now 8 years old, is as adventurous as they come. A regular at Lake Mohegan, he can be found frolicking on the beach, chasing sea gulls, going for a swim and exploring the trails with his rescued canine siblings: Pancake, an 11-year-old Bichon who prefers being carried to hiking, and Norman, a big, loveable mutt who happily lets Albert run the show.

Lulu, their one-eyed kitten sister, holds down the fort at home along with Jeppe, a parakeet, Thomas, the resident hamster and three goldfish who are grateful to no longer call the carnival circuit home.

An experienced world traveler, Albert has also vacationed in Denmark and made plenty of friends across the pond, not to mention the internet. However, don’t let his Instagram swagger fool you—when off-camera, this bold, independent pup is quite the cuddle bug.

“His videos show him to be fearless and tough, but he’s really the biggest mama’s boy!” says Lawson. “Basically, he’s happy and content if he’s with me—he’ll be so upset with me for revealing that.”

While Lawson may not have had experience with special-needs pets before adopting Albert, she’s now busy spreading the word about the joys of rescuing animals like Albert who are so often overlooked. These pets might need a little extra care, but as she discovered, they have plenty to give.

“I’m so grateful to be Albert’s mama,” she says. “He’s my living inspiration and makes me smile every day. This little guy grabs every little bit of happiness and goodness in life.”