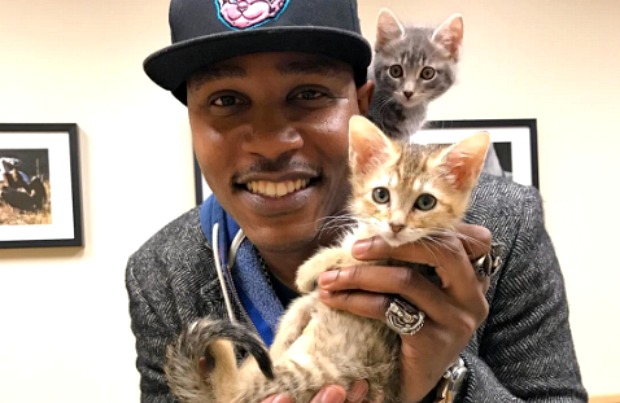 Save for Phoebe Buffay’s ode to “Smelly Cat” on Friends, there aren’t too many tunes about felines, let alone great, catchy songs that come straight from the heart. But that’s where Portland-based rapper Moshow changes everything.

With wildly entertaining and endearing YouTube videos for his tracks such as “Cat Emotions,” “Cat Litter,” and his latest, “Adopt a Cat,” Moshow is a devoted and loving cat dad who shares his deep respect and fondness for kitties with the world.

“I love everything about cats. Cats rule,” Moshow tells us. “They’re just ride or die.”

Moshow, who has been rapping since he was 16-years-old, says that his affinity for cats began in college where he met his Cat Lady (the sweet nickname for his now-fiance) and her kitty, Queenie.

From that point on, Moshow was a cat guy, which lead him to where he is today: a hip hop artist, who also happens to adore cats. “I’m a rapper. I love my cats. I’m the Cat Rapper.”

Moshow is a cat dad to four kitties, including a family of Sphynxes (mama cat Tali and her daughters Sushi and Megmam) and an adopted orange tabby (Ravioli), who are featured prominently on his amazing Instagram page.

“What people are seeing is 100 percent who I am,” Moshow says. “When I don’t post something, I’m still in the house, cats climbing on my shoulders, and I’m rapping around.”

Whether he’s giving kudos to all cat ladies out there (“Cat ladies are hot, cat ladies are awesome…. I don’t see the stereotype that people are talking about”) or singing about taking care of felines in need, Moshow simply wants to spread the love.

“I was born and raised in the projects in Baltimore. I grew up seeing a lot of people die, I lost a lot of friends. I grew up hearing I wouldn’t be anything,” he tells PawCulture.

Moshow says that with “hard work and dedication” he went on to not only graduate from high school and a four-year private college (where he earned a Bachelors in Computer Science), but “now I get to inspire the world with my music and follow my dreams and stay true to myself.”

This cat-loving rapper is living his best and most authentic life, and hopes his message of love resonates with fans.

“I want people to know that they can do the same thing. The only person that’s gonna stop you is yourself,” says Moshow. “It doesn’t matter where you’re born, it matters what you do with it and where you’re going.”