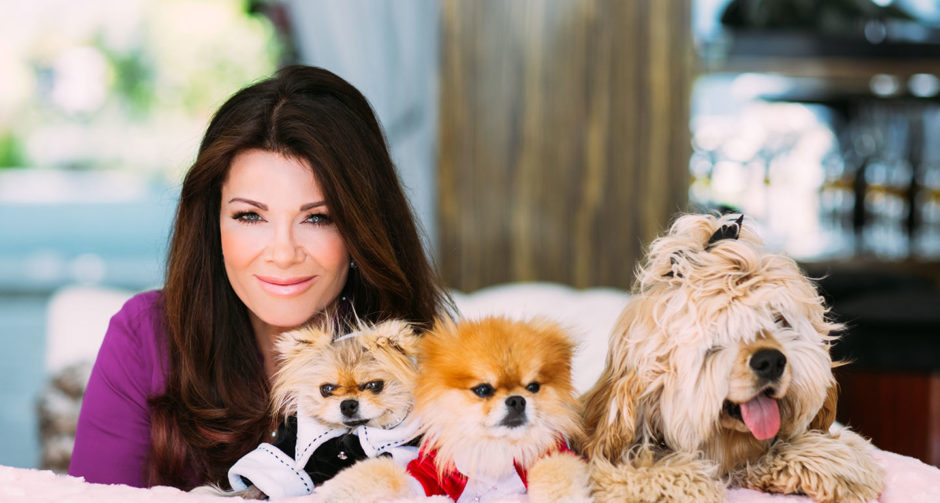 Lisa Vanderpump is madly in love with the canine species, and she’ll do just about anything to advocate for their rights. When she’s not filming The Real Housewives of Beverly Hills or catering to one of her many LA-area restaurants, the star is busy raising funds to care for abandoned pups, fighting the overseas dog meat trade and campaigning for the humane treatment of canines around the world.

In 2016, the restaurant mogul founded the Vanderpump Dog Foundation with the mission to “provide for a more human world for dogs worldwide.” She also launched a line of glitzy Vanderpump accessories (a portion of the proceeds benefit local dog charities) and opened up her very first dog rescue facility, The Vanderpump Dog Rescue Center, last month.

We caught up with Vanderpump to discuss her personal clan of eight dogs, the latest efforts of the Vanderpump Dog Foundation, and what life is like for her notoriously stylish pup Giggy – “Nobody has a better wardrobe than me but his is pretty close,” she says.

Pet Central: Tell us about your dog pack at home.

Lisa Vanderpump: We have eight. It sounds ridiculous but we’ve got quite a big property. Our two retrievers run around in the garden. One of the retrievers was given to me by my husband, Ken. And then he went to school because he was so naughty and he came back with a wife! He befriended a wife that had a thyroid problem so we inherited her and love her. Then we’ve got Schnoooky. He was in the dog-show world. His parents were both champions and he was given to us as an anniversary present I think because he’s too big to show. But he is magnificent and madly in love with me.

I have Giggy, who everybody knows. He’s been compromised with alopecia and has severe allergies. I was actually told that I should maybe euthanize him because his scratching and itching was so bad, but that would have deprived the world of Giggy. And then we had Daddio, his father, who we adopted when he was ten. Unfortunately he died when we were away for a few days. So then we found another dog on social media. He was very scruffy looking little guy who was up for adoption. He had been dumped and possibly abused and spent a lot of his time in a cage. His name is Harris. So him, Giggy and Schnook just follow me around like little adorable soldiers. And then I have Lollipop and Pikachu. Pikachu is riddled with problems. He’s on something like ten medications a day. And then Lollipop is an older Maltese. They are lovely dogs and they actually get along quite well.

Pet Central: How did founding the Vanderpump Dog Foundation come about?

Vanderpump: Initially we immersed ourselves in the pet world. We wanted to create an affordable pet line of collars and leashes and bags and clothes and toys. So we did the Vanderpump Pets line. Through that and us getting more involved, we started to see pictures of dog abuse. And suddenly the Yulin Dog Meat Festival was brought to my attention. My partner, Dr. John Sessa, Ken and I ended up really fighting that fight. We made banners and T-shirts and we formed a march to the Chinese embassy and that was documented by Bravo and that garnered a lot of attention.

Saving dogs has turned very much into a business for us. We have raised quite a lot of money and the money will continue to fight Yulin. We have still over 100 dogs in China that are being saved from the dog meat trade. We are doing a documentary that is going to show the fact that there are a lot of Chinese activists on the ground that are trying to stop the dog meat trade.

Pet Central: You’ve been a very instrumental part of trying to get Resolution 752 passed, which condemns the Dog Meat Festival and urges the country to end the dog meat trade. Where are we with getting that passed?

Vanderpump: We ended up forming a resolution because congressman Alcee Hastings joined our board. We have 160 congressmen now. We need 200 to get Resolution 752 passed. So I went to speak to Congress in an effort to stop the Yulin Dog Festival. We are thrilled to see that South Korea is actually falling into line and starting to abandon the dog meat trade, which is huge for us. We’re shouting from the rooftops.

Pet Central: What are the current priorities for the foundation?

Vanderpump: We’re involved in a lot of things. We’ve opened our Vanderpump Dog Rescue Foundation in Los Angeles on Third Street. We’ll be taking dogs from the kill shelter to be adopted there. Our documentary is going to be coming out in a couple of months. Hopefully that will garner a lot of attention.

The line is going very well. I think we’re in about 400 shops now. But a big part of our business will be endeavors to create more humane treatment for dogs worldwide. We want to make sure the foundation gets donations and continues to fight this battle. And we want to save as many dogs as we can from the kill shelter and put them in good homes.

Pet Central: What do you consider to be your biggest victories that you’ve achieved with the foundation thus far?

Vanderpump: I think we’ve managed to garner a lot of attention. I thank Bravo for actually supporting our cause and documenting it. I’ve always used reality television as a platform and a vehicle to support the things I’m passionate about. So I am proud about that. I’m proud about the fact that we’ve got our own resolution entered. I’m proud of the fact that we are doing our doing our own documentary. I’m proud that we managed to infiltrate dog meat trucks on the way there [and pulled dogs] off the truck. I’m proud of the fact that I’ve been managed to keep my eye on the ball because there have been so many times that my heart has broke and I’ve shed buckets of tears.

Pet Central: Where did your love of animals start?

Vanderpump: I’m a dog lover [and] I think any cruelty or any crime against an animal is a crime against humanity. I’ve decided to focus in on fighting for the humane treatment of dogs. I’d love for every animal to be treated humanely, but I can’t take on everything.

Puff is laid out like a little rug. Giggy is by the fire. As soon as I put the phone down and head towards the door, they’ll be up quickly and I’ll be followed. They look at me and they are like little people and they are so smart. How can you not feel their pain? I do not understand humanity. I will do everything in my power to stop people from treating them poorly.

Pet Central: Your pet line is filled with adorable pet accessories. Are there dos and don’ts to accessorizing your pets?

Vanderpump: I actually only dress Giggy. He has to wear clothes because we have to protect his skin. His skin wasn’t made to be exposed to the elements because he’s supposed to have fur. He wears pajamas and when he goes out, he wears coats too because he will shiver. We have to be careful with him.

Pet Central: Does Giggy have a better wardrobe than you?

Vanderpump: Nobody has a better wardrobe than me. But his is pretty substantial. He looks like a little Ewok or a little bear and so we’ve been quite creative. Since he has to wear clothes, it has to be fun designing them for him.

Pet Central: What is your favorite way to spend time with your dogs?

Vanderpump: We’ve got quite a big yard so we’re outside with them most of the time. I’m a terrible dog owner (laughs). I do spoil them. I do give them treats at the table. Shnoooky actually gets on the table, which is not something you should be proud of. Sometimes we’ll have a movie day at home and it will be the two of us and we’ll be with our dogs watching movies. I have three of them on the bed, which is difficult to get a good night’s sleep. But they love it.