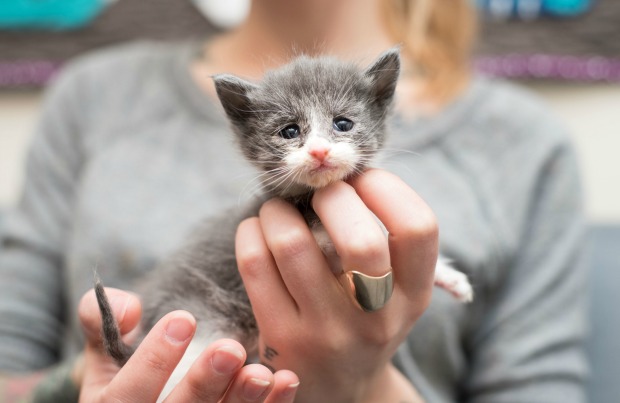 When I first rescued Small Fry, none of us thought she would survive. Small Fry, a spindly three-week old grey and white kitten, had been left at a DC animal shelter with her mom and four littermates, and her health was quickly fading. Bone thin and severely dehydrated, every rib was visible as she struggled to breathe. Small Fry was the runt of her litter, so when her whole family picked up a respiratory infection, it hit her the hardest. By the time I met her, Small Fry was less than half the weight of her littermates, fitting in the palm of my hand and looking up at me with glassy eyes.

Small Fry couldn’t breathe through her nose, which meant she also couldn’t nurse, so her body became weak from emaciation, dehydration and anemia. She needed a foster home that could give her individual attention and access to special medical treatment. During her first week of foster care, Small Fry required antibiotics, tube feeding, subcutaneous fluids, and constant monitoring.

Four days into treatment, something incredible happened. Tiny Small Fry wiggled her way over to her mother, and she started to try to nurse. This was a miraculous sign that her breathing was improving enough for her to latch, and that she had the energy and will to fight for her life. I scrambled to remove the other kittens from the mother cat so that she would have a fair shot at a meal, and watched as she feebly kneaded on her mother’s belly.

One week into foster care, her improvement was remarkable. Small Fry’s frail little body plumped up, and her weight nearly doubled! Her gaunt face filled out with puffy cheeks, and her previously visible ribcage was obscured by a chubby pink belly. As she began to feel better, her personality started to shine through. Small Fry discovered the joys of being a lap cat, and she would use her tiny kitten nails to scale the leg of any person who sat in the room in an attempt to get love and attention.

Even though she was the smallest of her litter, she didn’t let that stop her. As they got older, Small Fry’s whole family—all named after potatoes—played with her as if she was no different from any of them. Her siblings Chip, Yam, Gnocchi, and her favorite fluffy sister Poutine would all tackle each other and fight over toys. Small Fry made it clear that one toy was hers and only hers—her stuffed bird. Small Fry played fetch with the bird, and even carry it in her mouth to bring it to her bed. This tiny kitten had a huge personality.

Small Fry was so small, and she could fit almost anywhere. She particularly enjoyed curling up in an empty box of envelopes, a tiny woven basket, and a bright red heart-shaped bowl. Every time I’d peek in the room, she’d be sitting there in the bowl, taking a nap or just playing with some toys. Small Fry may have been just one pound, but she made it clear that she was the queen of her heart-shaped kingdom.

Weeks went on, and the babies started eating cat food and reaching an adoptable age. First up was Chip, a total mama’s boy who got adopted with their mother, Latke. Next, it was time for Gnocchi and Yam to get a loving family. But Small Fry was still too small to be adopted, so she would have to wait for several weeks before she was big enough to find her forever home.

After all she went through, it was clear that the best thing for Small Fry would be for her to go to a home where she could bring all of her favorite things—and that included her sister, Poutine. Just two months after being on the edge of death, Small Fry had transformed into a perfect, healthy young cat. With the past behind her, her future is now looking brighter than ever.

Small Fry’s story shows that even the most vulnerable kittens can thrive when given a chance in a foster home. Foster parents are the key to saving kittens’ lives and give each tiny feline an opportunity to receive one-on-one care. Small Fry is now an ambassador for foster kittens, sharing the message that every tiny act of kindness can make a big difference.

You can follow along with Small Fry’s progress at @smallfryandpoutine.

Hannah Shaw is the founder of Kitten Lady. Her mission is to change the way we perceive & treat animals—especially orphaned kittens.