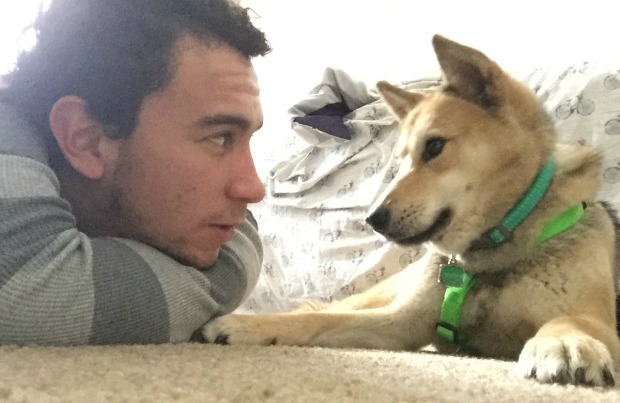 When Carlos Santiago-Lacasia first saw Lucy, he knew she was the dog for him.

Lucy was one of 200 dogs rescued from a South Korean meat farm earlier this year, a rescue that was managed by Humane Society International as part of the organization’s campaign to end the dog meat trade in Asia.

Santiago-Lacasia, the intake coordinator at the Humane Society of Tampa Bay, was there when the facility welcomed 14 of the rescued dogs to be rehabilitated and eventually adopted by loving families.

The dogs had lived under horrendous conditions, says Nash McCutchen, the marketing coordinator at the Humane Society of Tampa Bay. When Lucy and her canine companions arrived at the shelter they were filthy, withdrawn and severely traumatized. The staff had never seen dogs like this. Unlike the pups carrying on in nearby kennels, the South Korean dogs were eerily quiet.

The dogs were also completely uninterested in humans. Dogs are normally social animals, McCutchen says, but many of these dogs had been born on the farm and never known human kindness. The ones who had been pets, as evident by their frayed and filthy collars, had been abused for so long they forgot people could be good.

When Lucy first arrived at the shelter, she was so traumatized that she tried to disappear into the back of her kennel. Santiago-Lacasia knew he had to be patient.

Teaching Dogs to Be Dogs

A dedicated team of staff and volunteers worked around the clock to bring the dogs back to life. Socialization with humans and other dogs was the main goal.

The process started with staff and volunteers crawling into the dogs’ kennels and sitting there quietly, not interacting with the animals at all. Once the dogs seemed comfortable with the idea of a neutral human presence, volunteers would slip them a few dog treats, encouraging them to associate people with something positive.

Despite what the dogs had been through, the staff didn’t fear they would be harmed. One pup, Rosa, snapped at a volunteer, then, upon closer inspection, the team realized that on top of all she had been through, Rosa was also pregnant. Another, Harriet, was likely born on the farm and would fall asleep standing up because she didn’t understand the concept of lying down.

The staff also had to teach the dogs how to play. Many of them had never been outside before and didn’t know what grass was.

“The first couple of days, there were a lot of dogs just standing there during their playgroups,” McCutchen says. “We had to get them used to being dogs.”

Santiago-Lacasia visited Lucy every day, and after two weeks, she came to the front of the kennel and pushed her flanks against the cage. Lucy wanted to be pet.

“Seeing that small spark in her made me want to help bring out the dog she wanted to be,” he says.

Santiago-Lacasia adopted her two weeks later. Barely a month after leaving the meat farm, Lucy was ready to go home.

The Dogs at Home

The dogs had become used to the staff at the Humane Society, but going home with their forever families was another major transition for the animals, all of who had already been through so much.

The dogs were sent home on two-week “test drives” to make sure their pet parents were comfortable caring for a dog with special needs. Each adopter received a personality profile of their new pet and tips on how to continue the individualized training and rehabilitation that was started at the shelter.

“Many of the dogs needed to be taught basic behaviors, like accepting a collar and leash, accepting human touch, taking food from hands, crossing thresholds, and, saddest of all, playing,” says McCutchen.

Adopters were taught how to continue the positive reinforcement training started at the shelter. Three months after leaving the farm, all but one of the dogs have found forever homes (Rosa has just finished nursing her pups and is now ready to be adopted).

“The first couple of days, there were a lot of dogs just standing there during their playgroups,” McCutchen says. “We had to get them used to being dogs.”

Lucy was a bit withdrawn when Santiago-Lacasia brought her home, but after a few days, she fully embraced her new role as spoiled pet. She doesn’t like loud noises and she’s still a little apprehensive when strangers approach, but for the most part, she’s like any other dog.

“I can’t believe someone would put her in that situation,” he said. “It’s difficult to think about, but it makes me want to give her that much more love and attention.”

Helen Anne Travis is a freelance writer based in Tampa, FL. She also writes for CNN, The Guardian and The Globe and Mail.