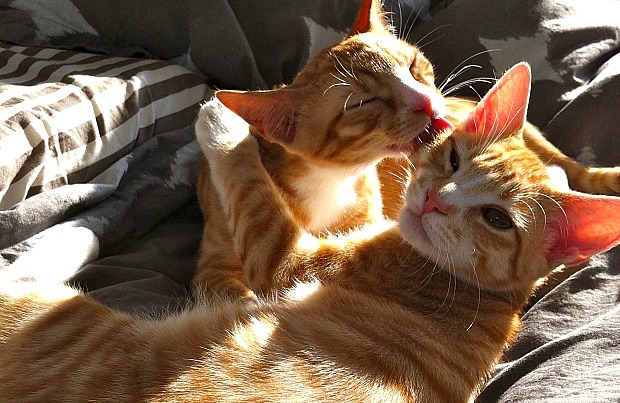 I grew up in a home that included both dogs and cats—usually one of each at a time. The cats we had were the type that came when you called, loved to roughhouse, and sort of let you do anything to them. Basically, these were cats that acted like dogs.

Our orange tabby, Hobbes, always greeted me at the door, purring and meowing and happy to be picked up and carried around. He would let me scratch his belly in any direction I wanted, at whatever speed. When I was a teenager, I remember how our next tabby, Milo (more of a peachy-cream than bright orange), would come bounding up the stairs when I yelled his name, and immediately plop himself right on my chest and stare deeply into my eyes, with what could only be described as a slight smile on his face.

After I left home for college, I didn’t have any pets for a long time. But ten years ago, when I met my husband, we bonded over how much we loved animals. Evan told me how he’d longed for a dog since childhood, so when the chance to adopt a rescue arose, we became “parents” to Franny, an older, sweet-tempered chow mix who loved to chase squirrels and take rides in the car.

Soon we welcomed our first daughter, but about 18 months later, Franny got sick and died. I’ll be honest: as devastated as I was, I also knew that life just got slightly easier for us. It was hard having a baby and a dog. Living in New York City, I couldn’t just let her out into a yard at night for a last pee before bedtime, and when my husband traveled, I’d have to bundle us all up and go for a walk in the dark. This is all to say: I definitely wasn’t ready to get another dog for quite a while.

It wasn’t more than a year later when I saw two orange tabby kittens at a cat rescue event down the street from our home. Four-months-old; boy-girl littermates, and oh-my-god—they were break-the-internet cute. They were on their way home with me in about 20 minutes.

At first they were scared and too shy to move far from their little carriers, but within days they became scampering, brave, and naughty little kittens. I had to teach them not to chew on my hair at night (nor my necklace, nor my earrings), to scratch only the sisal posts placed in every room, and to leave our plants alone. (That last lesson has never fully taken, and we are, sadly, now a home devoid of live plants or fresh flowers.) As Bean and Goose have grown (they are now four-years-old), their little personalities have become more definite, and they’ve shown themselves to be generally lovely, mostly well-behaved cats—but also very, very… catlike.

Bean (the male) is moody and aloof and skittish. Good luck holding him or even getting him to sit in your lap for more than .5 seconds. He scatters when people come over—sometimes only peering out from the top of the stairs just as they are leaving. Goose (the female) is affectionate, but never* really*cozies up that close to me—she prefers to just do that cat-like body-rub against my legs, my feet, and then wander drowsily away, usually to take a nap on the other side of the apartment.

They’re inscrutable, stubborn, and often quite distant. (Literally: sometimes they hide in little spots that I can’t find.) When they do sidle up to me for some ear scratches or cheek rubs, the interaction feels fleeting, and the slightest little thing will send them scampering away—and if I am being honest, my open arms feel a bit cheated out of creature companionship.

And while I didn’t realize it, my disappointment started to slip out in small, snide ways. People would come over and when they’d leave, I’d offer: “Want one of these cats as a parting gift? Free!” Or, when new friends entered our home, I’d joke: “Oh, we have two cats by the way – they’re the worst.” I’d clarify to anyone who could hear: “Oh we’re dog people, for sure. But somehow we ended up with these two rude fur-balls.”

Somehow I just couldn’t accept that while, yes, I’d previously only known cats who were super-social and playful, I now had two cats who fell closer to the typical description of cats: solitary, wary and independent. How could this have happened, I wondered? I raised them the same way I’d raised my other cats, and yet the results were so different.

It took a book I read with my 1st grader, to set me straight.

My daughter and I were paging through a nature book one night, learning about the history of domesticated cats and domesticated dogs when it hit me. Bean and Goose aren’t defective or rude in any way. They are 100% as they should be. They share no lineage with dogs, and aren’t wired that way. While of course, there will always be some cats who act like little dogs and some dogs who are more cat-like, most cats are capital-C CATS. The sooner I could accept that, the better.

And so I did. Ever since that bedtime reading revelation, I cast aside my notions of what kind of cat I wanted to have, or that I could even try to influence their personalities or the majority of their behavior. And almost overnight, the way I feel about my Bean and Goose has transformed. When they walk languorously (imperiously?) past me, I don’t fling my hands out and demand they come to me. Instead, I take a moment to admire how adorable they are, the lovely sound of their loud purrs, and how sweet they look curled up in that sunspot — be it a few inches away or all the way across the room. Gone are the silly jokes at their expense—and I offer no apologies for my sweet, scaredy-cats anymore. And when one of them does creep up for a cuddle or even just to consider batting a paper off of my desk, I let them set the pace, the tone, and the time limit. In a sense, I am no longer asking so much of them—things they can’t give, anyways—but I feel like what I’m getting is not only good enough, it’s pretty great.

In the end, I’ve finally realized that these cats weren’t put on this earth to meet all my needs or even meet me at the door every day. But somehow, we meet in the middle—and it’s a pretty perfect place.